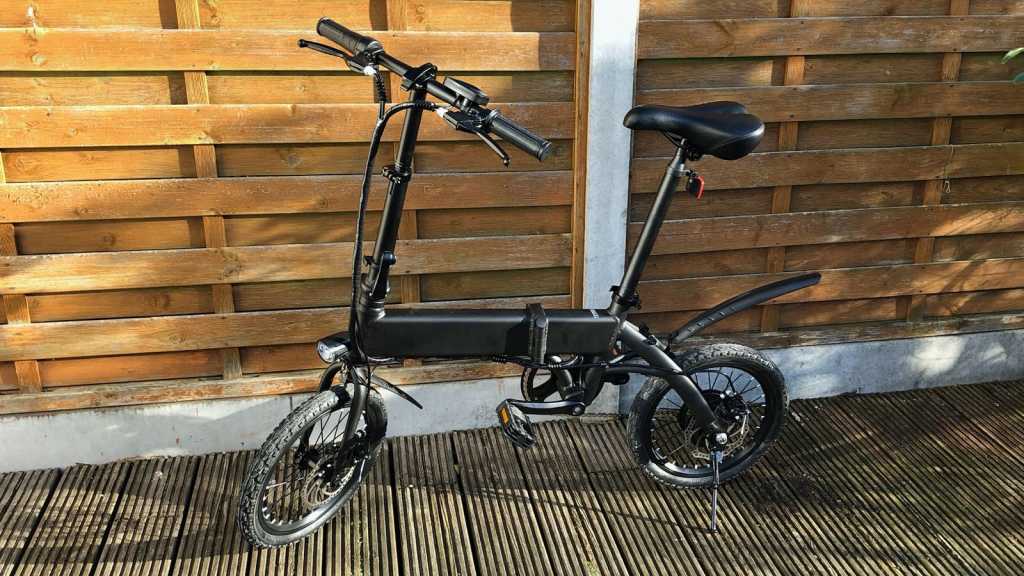 The OneBot T4 is a folding electric bike which is one of the cheapest you’ll find. As it doesn’t have gears, it’s relatively limited in speed, but the motor is powerful enough to take you 20 or 30km even if there are a few 15 degree hills.

It’s easy to spend a lot of money on an electric bike. But there are more affordable options. There’s Ancheer’s electric mountain bike at just over £500/US$525 and the F-Wheel DYU for under £400/US$450.

The Onebot costs a similar amount as the F-wheel and also folds up so you can more easily transport or store it. Plus, it has pedals which means you can cycle a lot further. With the F-wheel, you’re walking once the battery has run out as that model is purely electric.

You can buy the OneBot T4 from Gearbest for £385. Oddly, it’s much more expensive if you’re in the US: it costs $524 from GearBest.

You can read reviews of alternatives in our roundup of the best electric bikes.

There used to be a white version of the T4, but this is discontinued so the only option is the rather serious looking black version which doesn’t have any stickers on it at all.

The sample we were sent by GearBest had 16in wheels with mechanical disc brakes and a 240W motor in the rear wheel hub, whereas the description on its website says it has a 250W motor and V-brakes. For the motor it’s a minor difference and UK and EU law limits electric bikes to 250W in any case. And it’s a bonus getting disc brakes.

The bike arrives in a reasonably compact box, yet requires no assembly at all. Converting it from folded-down to ready-to-ride takes about a minute: the frame folds in the centre, the handle bars lift up and the pedals flip down.

When folded, the bike isn’t particularly stable and has no tiny wheels like certain  Brompton models.

The battery is hidden in the front section of the frame, with the electronics in the rear part. Wires are generally on show, although they’re wrapped up neatly and being all black, they’re not too noticeable.

You get front and rear mudguards and, impressively, a nice backlit LCD display which includes a battery meter, speedometer and trip distance.

There’s a built-in horn operated by a green button on the right, and a front light which has no control at all. And since no instruction manual was present in the box, we’re still none the wiser as to how to turn it on.

What you do get in the box is a charger with US and European plugs: so long as you have an adaptor or a UK plug with the common ‘figure of 8’ connector, you’ll be able to charge it easily.

Since the battery is in the frame, you’ll need to bring the bike close to socket.

There’s height adjustment for the saddle and handlebars, both quick-release of course. The saddle can sit as low as 90cm from the ground and be raised to 110cm, and there’s a maximum rider weight of 115kg.

Roughly speaking, it’s suitable for those up to around 5ft9 (175cm).

Range is claimed to be 20-30km from the 7.8Ah 36V battery. The distance you can actually ride with assistance will depend on the terrain, temperature and how much you’re pedalling. There are three assistance levels, all of which will take you to a comfortable 22km/h (14mph).

You can’t realistically go much faster because there are no gears. However, you can get a couple of extra mph if you use the twist-and-go throttle. You can use this in all three assist modes, but it’s disabled in mode 0 where the motor is effectively turned off.

Riding the Onebot is good fun. The motor kicks in almost immediately when you start pedalling, and you can of course use the throttle to get maximum thrust even if you’ve set the assistance to level 1 or 2.

Being a fold-up bike, it’s not as rigid as a conventional one and you can feel a little flex in the handlebars when pulling on them to cycle up a hill. The small wheels also make it quite a different feel to cycling a standard bike with 26in wheels, and although you can cycle on gravel and grass, it’s happiest on smooth tarmac.

When fully charged, it will propel you up hills with very minimal effort from pedalling. But when the battery is low, the meter can dip from 65% to 0% even on a very short climb. That’s one thing to note about electric bikes: they can deliver maximum assistance for a limited time when climbing hills. Then they ‘recover’ once you’re back on the flat.