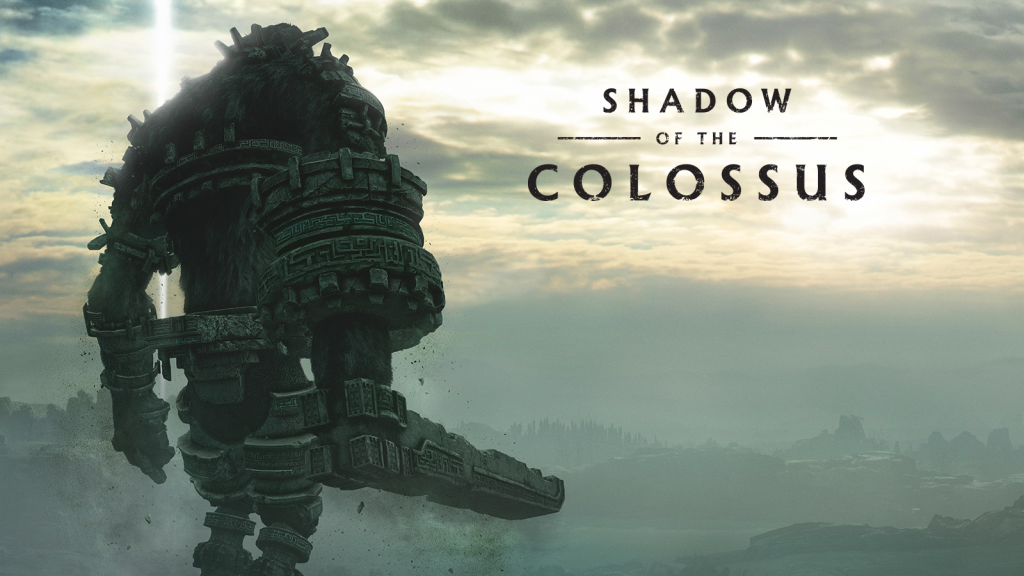 Shadow of the Colossus is a must-have for fans of the original game – it’s stunningly gorgeous, both in terms of the open world environment and the 16 Colossi that you come across during gameplay. But as good as it looks, I don’t think that there’s enough on offer to entice those that didn’t play the original, as it may seem a little bit basic compared to more recent games of a similar nature.

13 years after the original was available on the PlayStation 2, Shadow of the Colossus is back – this time in stunning dynamic 4K on PS4. It features the same elements that fans of the original will enjoy, from the open world to the Colossi, with stunning graphics that match those of modern games.

The remake of the classic game was originally announced during a Sony press conference, so it should come as no surprise to hear that Shadow of the Colossus is a PlayStation 4 exclusive. The good news is that it’s now readily available to buy around the world, and can be picked up from the likes of Amazon (£24) and Game (£25) in the UK, or BestBuy ($40) in the US.

Shadow of the Colossus review

First up, Shadow of the Colossus looks incredible. It gives long-time fans of the game a chance to really appreciate the detail of the vast open world and the 16 Colossi you go up against, in dynamic 4K resolution (when running on the PS4 Pro, anyway). Visually, it looks like what I’d imagine Zelda: Breath of the Wild would look like if it was developed by Sony, complete with horses, sweeping green fields, a trusty sword and stone-infused enemies – but that’s another article altogether. 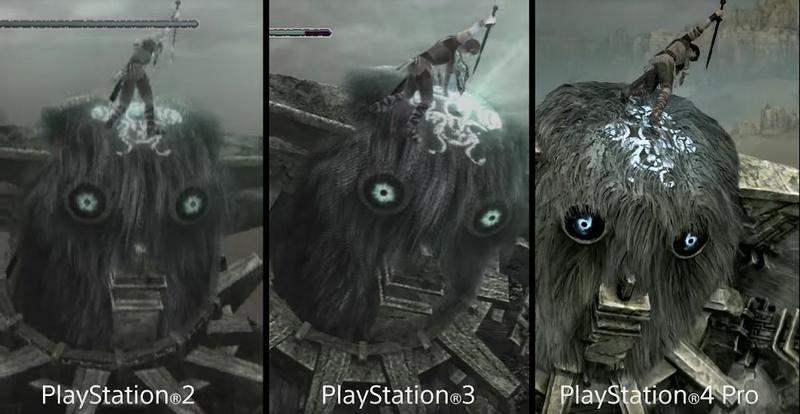 The Colossi are breath-taking, both in scale and design. No two are alike, nor are the way that’s you take them down. While some may require you to utilise the environment to get an advantage, others require quick reactions (like jumping on the wing of a giant bird and clinging on for dear life as it soars through the sky) and some just take a lot of perseverance. It’s not always immediately clear how to make your approach, but through studying them as they move and attack (and a helping hand in the form of an often-cryptic voiceover prompt) you begin to understand and make your plan of attack.

While some elements of combat are frustrating (something I come to below), there are moments where going head-to-head with the Colossi can be described as nothing else but epic. You really are tiny compared to them, making the feeling of stabbing them in weak spots and hearing them shriek and shake to try and get you off feel all the more satisfying.

Clinging on to the colossus as it tries to shake you off is something you’ll find yourself doing fairly often, and it’s here that the fantastic player animations and ragdoll physics shine. You’ll lose balance, roll around, scramble for something to grab onto and will be flung around as the Colossus thrashes, and it all looks incredibly realistic. Despite having a mystical sword, the protagonist is only human, and that’s communicated well in terms of movement and combat. 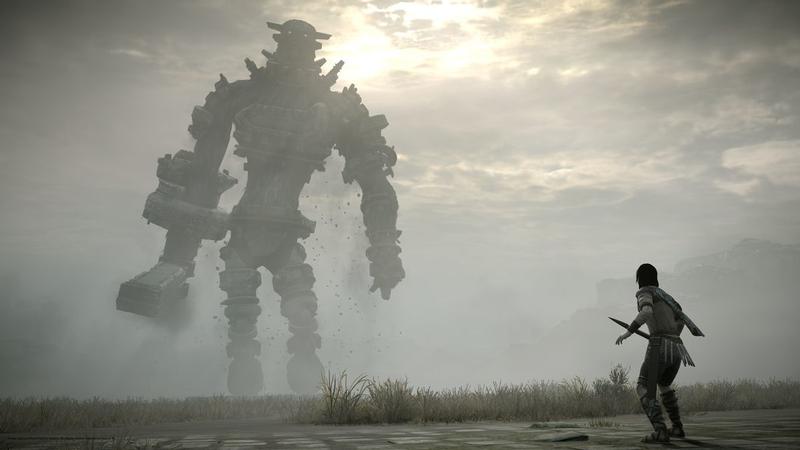 It’s not only the Colossi that are stunning – the open world is gorgeous with a varied landscape that features dense forestry, epic waterfalls, geyser fields and even a desert. The way that you switch between the environments is presented in a pretty epic way too. Small, dark caverns will often open into a completely different biome than the one you were previously in, and the changes are often dramatic; lush environments lead to dry environments, light environments lead to dark environments, and so on. Even the small details have been catered for, from your horse’s mane blowing in the wind as you gallop across open fields, to the little lizards that scuttle by as you cross desert plains.

But while Shadow of the Colossus is stunning and is packed full of epic moments, there are elements of the game that haven’t aged well – a downside to remasters. While Shadow of the Colossus looks like a PS4 game, it’s still a PS2 game at heart and could be considered by some, especially those that didn’t play the original, as being a little basic compared to other games available in 2018. The cheap £24.99 RRP should ease this for some, but it’s still worth noting. 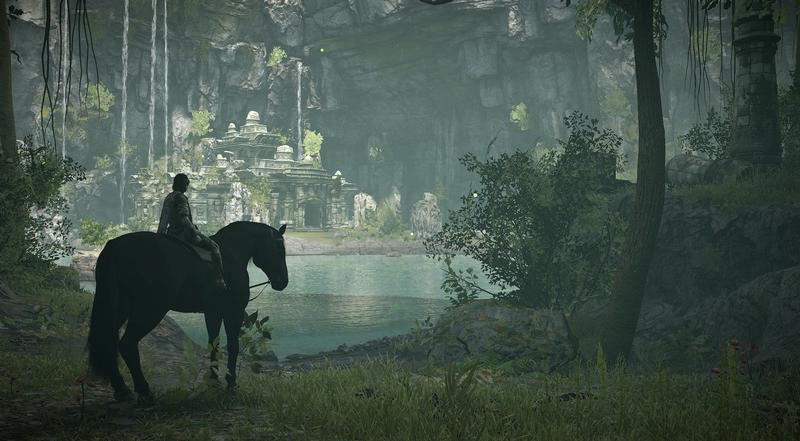 The open world is a good example of what I mean: it’s stunning, vast and varied, but there’s nothing to do apart from battle the Colossi that await you. There are no small monsters roaming around for you to take on while hunting for the Colossi, there are very few items that you can find scattered throughout the world and there are no stats to level up.

You do come across Easter eggs and hidden areas every now and again, but these offer no in-game benefit and thus you aren’t really motivated to explore beyond going where your sword leads you. There are temples and shrines dotted across the map that can heal you, but they’re pretty pointless; there are no roaming enemies to weaken you before a Colossus battle, and once it begins, you can’t leave the arena until it has been defeated.

The game also lacks in terms of combat variety, and it can become a little frustrating; the sword offers a single stab attack, there’s no way to run faster (even when battles) despite having a stamina bar for climbing and swimming, and finally, there’s a single button to aim and fire your bow and arrow despite the fact that other buttons (like L2) aren’t utilised in any meaningful way.

The camera also snatches control away from you frequently, to the point where you sometimes feel that you’re battling it just to take in the gorgeous vistas around you. Yes, it has its moments, like when you’re riding along a cliffside and it pans to a stunning view of a waterfall, but when you’re battling a Colossus and you’re constantly battling the camera to look where you want to, it becomes incredibly frustrating. 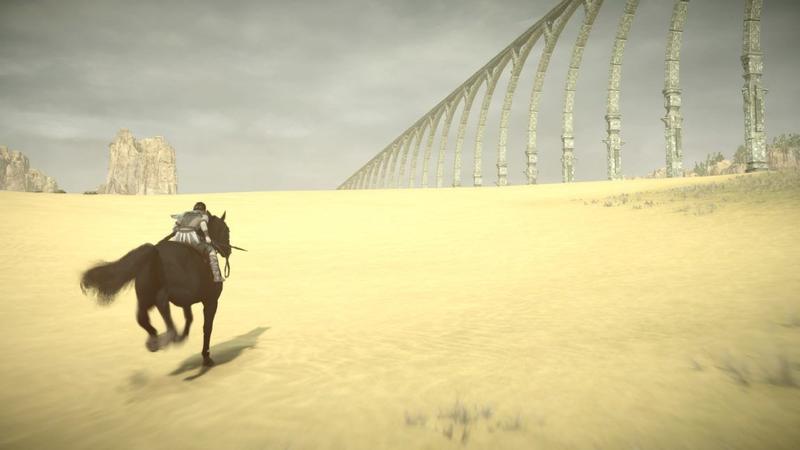 Not as frustrating, mind, as the climbing mechanics – and considering around 70 percent of the game requires climbing, it’s not a good sign. The idea behind climbing – jumping using X and holding using R2 until your stamina runs out – is simple, but the execution is anything but. Don’t get me wrong, it has moments where it works flawlessly, but there are more moments where you grab onto the wrong surfaces, lose balance when not moving or straight-up glitch into an unnatural climbing position, breaking any immersion provided up until that point.

The horse control mechanics won’t be winning any awards anytime soon, either. While the horse looks stunning and the animations are incredibly life-like, the controls are clunky (why button bash Triangle to move?) and it’s almost impossible to control at a high speed. It does have a basic AI that’ll try to keep it on a straight path in tight spaces, but you’ll see it glitch out near ledges or when low-hanging branches block its path.

So, while Shadow of the Colossus will be a huge hit for fans of the 2007 original with its stunning graphics and epic Colossi, I’m not sure that it has the legs to be able to stand up to great PS4 games of a similar nature like Monster Hunter: World and Final Fantasy 15. It just leaves me wanting something… more, even after hours of gameplay and a relatively cheap price tag.