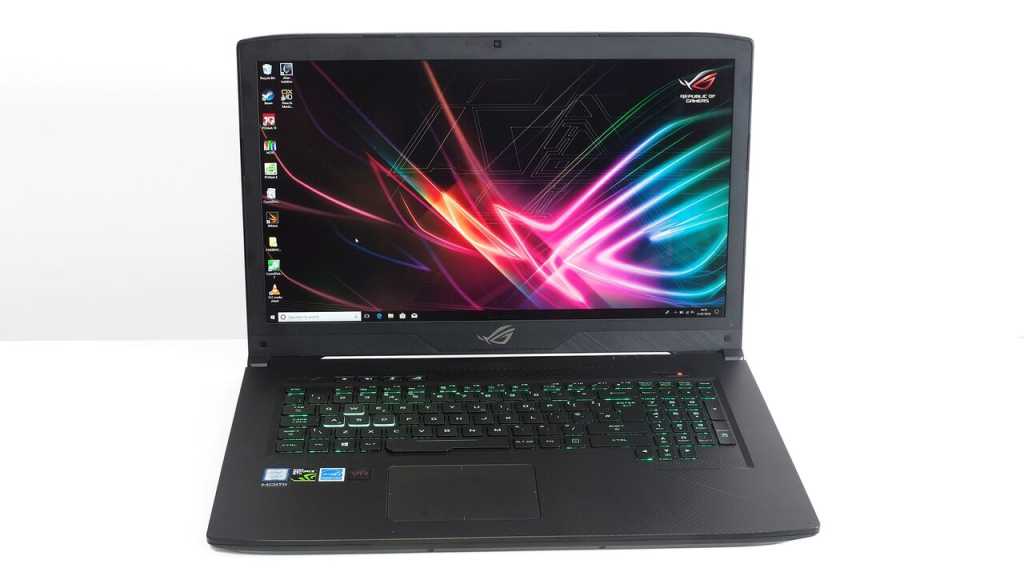 The Asus RoG Strix GL703VM is a high-quality laptop that packs great 1080p gaming performance into a respectably thin and light case. It’s not that portable, and isn’t designed to be, but is a good option for those who don’t want a machine that weighs 4kg and is 4cm thick. You don’t pay in performance, but the Asus RoG Strix GL703VM’s keyboard does get warm during play, which may annoy.

The Asus RoG Strix GL703VM is a high performance gaming laptop that isn’t so big and heavy that moving it between rooms seems like a grand operation. It’s still a 17in laptop, so you won’t want to carry it around all day, every day, but it’s easier to live with than the lumbering beasts among gaming laptops.

It has the performance, the look and the display quality.

There are just a few Asus RoG Strix GL703VM issues to consider. Battery life is poor, the relatively slim frame sees heat bleed out to the keyboard after a stint of gaming and some of you may prefer the keyboards of the fatter models from Asus, Alienware and Acer.

It also uses last-gen processors, mostly because at the time of manufacture (and review) they are still the best option.

For some wider context, let’s compare it to the Alienware 17, which is perhaps still our money-no-object pick among gaming laptops. The closest Dell’s Alienware configurator lets us get to this spec would cost you £220/US$220 more.

A cheaper Asus RoG Strix GL703VM spec with Core i5 CPU, 8GB RAM and 128GB SSD costs £1299, and may be worth considering if your main concerns are gaming performance per pound. As far as we can tell, this model isn’t available in the US.

Asus offers a one year collect and return warranty.

Asus makes a lot of gaming laptops. It can be hard to get your head around all the options and model numbers.

The GL703VM is one of its fairly high-performance models, but is also unusually slim and light for a 17in gaming laptop, like last year’s model. Picking it up and carrying it around is a completely different experience to doing so with an Acer Predator 17 or Alienware 17.

Just look at the stats: the GL703VM is 25mm thick and weighs 2.7kg. It’s not ultra-slim or super-light, but this is what you might expect of a “normal” 17in productivity laptop. The Acer Predator 17 weighs 4.2kg and is around 40mm thick. It would look huge next to the Asus RoG Strix GL703VM.

The extra size comes with benefits, of course, most notably a bigger, better cooling system.

However, such huge laptops are just not enjoyable to use on your lap in the living room as Friends re-runs play endlessly in the background. The GL703VM feels at home with this sort of casual use.

Its build is typical of a gamer machine. The lid is brushed metal, but the rest is plastic, and there’s a pleasant soft touch finish on the inside, with a carbon fibre-like look.

The panels aren’t quite as rock-solid as those of the Alienware 17. But we frankly only noticed the difference when pressing down with a thumb to look for weak spots. There’s some fractional flex, but nothing that impacts real-world use.

The style is reasonably aggressive, but as there are no giant vents that look as though they’re based on something seen in a sports car, we think more people will find its style palatable. A big light-up logo sits on the lid, there are some Strix-series swooshing contours on both the lid and inside. But no-one’s trying to pretend the Asus RoG Strix GL703VM is a laptop for people ashamed of their gaming habit.

There are a broad range of connections, all of which sit on its sides. You get four full-size USB 3.0 ports and one USB-C 3.1, specced to the “Gen 1” standard rather than the faster Thunderbolt 3.

HDMI and mini Display Port connectors make attaching a monitor or TV easy, and there’s an RJ45 for direct connection to a router, access point or Powerline adapter.

There’s no optical drive, which we don’t miss, but there is an SD card slot on the right edge.

The keyboard is one reason to consider one of the big and fat gaming laptops over the Asus, but not because this laptop has a poor typing surface. Laptops like the Alienware 17 and our old favourite Asus G753 have special keys that attempt to infuse some of the feel of a mechanical keyboard.

This laptop has more conventional key action. There’s solid resistance and feedback is good, but the key depress is relatively soft and smooth. If you’re after a click or a clack, you don’t get it here.

Our impression is that the GL703VM’s keyboard is of very high quality, and typing on it is a breeze. But gamers can be quite specific about key feel.

As you’d hope, a backlight adds the gamer flair missing from the key action. You can set it to any colour of the rainbow, and four zones let you create your own custom gradients. There are also animation programmes, although as most are quite distracting we think they work best on the shop floor rather than at home.

There are no macro keys rows, but a few custom buttons towards the top give you handy access to volume control, the mic mute (for game chat) and the Asus ROG control centre app. This lets you monitor system temperatures and resources, and change fan behaviour.

The trackpad is about as conventional as the keyboard, aside from some superfluous markings on its surface. Buttons are integrated and it uses a plastic surface rather than a textured glass one.

It does feel good in use, with very little sign it’s not a higher-end glass construction, and the click action is decent. Not too stiff. Not too loud. No driver problems. But at the price, glass would have been nice.

The Asus RoG Strix GL703VM comes with three varieties of screen depending on the exact model and territory in which it’s sold. All have 1080p panels, but you’ll find one with 60Hz and 120Hz refresh rates and IPS or advanced TN panels.

Colour saturation is fantastic, with full coverage of the sRGB colour standard and beyond, ending up with 135 percent of this most common gamut. It also covers 84.2 percent of Adobe RGB and 92.8 percent of the DCI P3 cinema standard. Colours look rich, and this is only bolstered by the remarkably good 1200:1 contrast.

The key appeals of this particular laptop are elsewhere, though. 120Hz refresh enables v-sync for frame rates higher than 60fps, which the GTX 1060 can achieve with some games, and TN response times are very fast. Asus quotes “5ms”, much faster than an IPS alternative.

We can’t say we’ve noticed this in our use. But we’re not competitive twitch gamers: hardcore FPS fans will appreciate such low display lag.

There are still some telling signs of the TN tech in use, though, which may make you want to hunt out the IPS version if you’re not bothered about display response times. Tilt the screen back and you’ll see some contrast shift, where the image looks shadowy and inverted. And we simply find the display character of IPS more appealing than TN.

There are no revelations here, but these specs are still the best for the Asus RoG Strix GL703VM. As of January 2018, 8th-generation chipsets designed for performance laptops have been teased unofficially as part of the “Coffee Lake-H” family, but are not available yet.

The Asus RoG Strix GL703VM is an excellent laptop for 1080p gaming, and the frame rates you’ll see won’t be much different from those of the much bigger, heavier alternatives. You can play most games at 1080p, with all the visual effects turned up, and get solid frame rates.

Deus Ex: Mankind Divided is a fairly demanding title, but still averages 39.8fps at Ultra. It runs at a blistering 95fps at 720p, Low settings.

The less demanding Alien: Isolation is an indicator of quite how much slack the GTX 1060 leaves in some games. At 1080p, maxed-out visuals, it averages 138fps, rising to 216fps at 720p.

We think the GTX 1060 is the sweet spot for serious gamers who don’t want a huge laptop, or a hugely expensive one using Nvidia’s new low-heat Max Q graphics cards. They offer even more power, but don’t come cheap.

As the Asus RoG Strix GL703VM runs Windows 10 off SSD storage, general performance is excellent. The quad-core CPU has plenty of scope for running video editing and similarly demanding apps, and having 16GB RAM to lean on lets you treat your desktop like dirt without an obvious performance hit.

The only reason to pause is what’s in the pipeline. We expect to hear more about Intel’s 6-core 8th-generation performance laptop CPUs and Nvidia’s Volta GPUs before too long. This is a high-performing laptop, but we’ll see more impressive hardware this year: all the components here are well-established.

Given how relatively slim the Asus RoG Strix GL703VM is, we’re quite impressed by its noise levels. It’s near silent with light use, and while the fans obviously spin almost as soon as a game is run, their tone is not particularly distracting. There’s none of the high-pitch whine you hear in an ultraportable under strain.

Heat is an issue, though. The cooling system doesn’t manage to keep heat away from all areas you touch. As you play the warmth from the CPU and GPU starts to bleed onto the keyboard. As we write this on a cold January day, a warm keyboard doesn’t seem so bad, but it’s a sign the cooling system just isn’t quite powerful enough. Or that the Asus RoG Strix GL703VM is that bit too slim for its own good.

It radiates through most of the keys, from the top-centre, suggesting this dispersal may be in part deliberate. But it’s not ideal.

The Asus RoG Strix GL703VM also has poor battery life. We frankly wouldn’t dream of taking a 17in laptop too far from the house just for our shoulders’ sake but students or canny multi-taskers looking for a laptop that can do everything should take note.

Playing a video on loop at 120cd/m brightness, the Asus RoG Strix GL703VM lasts just 2 hours 15 minutes. You can noodle around on the laptop as someone else watches a film you don’t want to watch, but won’t handle long train journeys. And it is, obviously, miles off managing a full day’s work away from the charger.

Such stamina actually feels like fine fit to us for a laptop like this. But we can appreciate some of you will be disappointed. Last year we reviewed a Dell Inspiron 15 Gaming laptop that lasted almost 9 hours. What a difference.