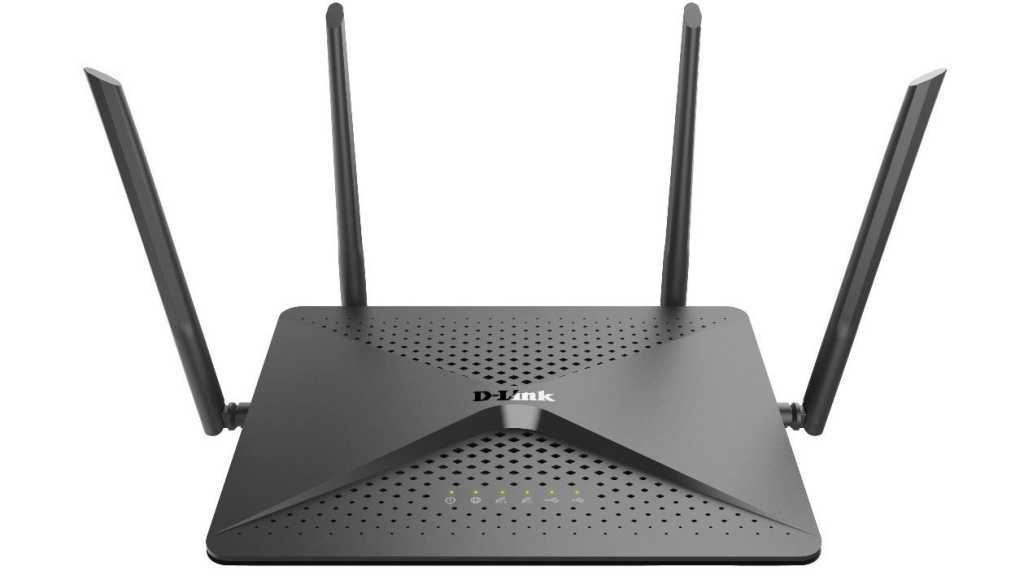 The D-Link DIR-882 is an interesting combination of solid wireless technology and useful extra features including DNLA and FTP. The modest extra cost of this over an AC1900 design makes it an interesting proposition for those that use their Wi-Fi heavily or exclusively.

D-Link has a history of delivering high-end networking features without the price premium other brands charge. Its latest EXO branded range targets home users who like to push their wireless connections for gaming and media streaming.

The range includes the DIR-878 and DIR-882 routers and it’s the latter we’re reviewing here. Is this the best gaming router that you can get for less than £150? Let’s find out

If you hunt around you can find it for around £135, including from Currys PC World Business. It’s more expensive from Amazon in the UK at the time of review, but from Amazon US, it’s $149.99.

While some of the alternate AC2600 designs do have more features and configuration options, the DIR-882 delivers top-notch Wi-Fi features and performance at an entry-level price.

Designers of Wi-Fi hardware have a significant challenge to meet these days, with 802.11ac technology being five years old, but no obvious replacement on the horizon. Sure, 802.11ad is beginning to appear, but read our TP-Link AD7200 review and you’ll see why it isn’t necessarily the replacement for 802.11ac.

Router makers have ridden the successive waves of 802.11 ‘g’, ‘n’ and ‘ac’ class upgrade, but are now forced to become more creative to differentiate their products in a crowded marketplace where pretty much every router now supports the latest standard.

D-Link’s DIR-882 is a good example of how some router makers are revamping their products and getting more imaginative with those Wi-Fi standards that already exist.

In terms of designs, the DIR-882 isn’t anything radical from the outside. It’s also not especially great looking.

The black plastic wedge sprouts four antennae, has Ethernet and USB ports at the rear, an external PSU and LEDs which illuminate status icons on the upper surface.

The surface of the box is attractively textured, the antenna come pre-installed. There is an additional USB 3.0 port hidden under the front right edge, too. 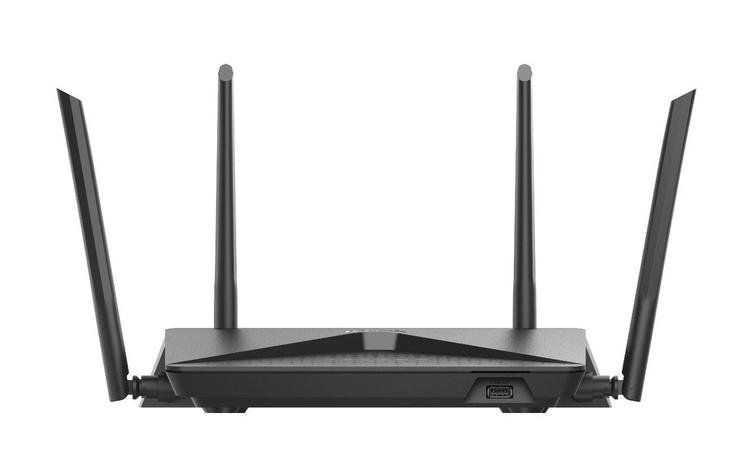 Excluding the power supply, it weighs just 570g and can be wall mounted, although D-Link chose not to provide any screws for that job.

What this router doesn’t have is a modem. Therefore, if you want to use it with an existing DSL broadband connection, a separate modem is required. For UK customers D-Link makes the DSL-320B/UK – ADSL2+ Ethernet Modem (Annex A), which costs a little over £20 from most online retailers.

Whatever they look like outside, it’s the hardware inside that interests the majority of customers looking to buy a new router.

Technically the DIR-882 carries the AC2600 (800 Mbps in 2.4GHz + 1733 Mbps in 5GHz) label, but exactly how it justifies those theoretical numbers is worth understanding.

Being a Multi-user MIMO ( MU-MIMO) design,  each of the four antennas can communicate with a different device simultaneously, and manage four data streams within each of them. Note that those devices need to support MU-MIMO as well: it doesn’t work with any old phone, tablet or other gadget.

As this is also a ‘wave 2’ router, it can also expand the frequencies on each link. Original Wave hardware had a theoretical maximum of 1.3 Gbps on a single link, and about half of that in real numbers. Wave 2 doubles the potential, allowing achievable throughput that exceeds 1 Gbps.

Given the gigabit (1 Gb/s) limits of a wired Ethernet LAN port, Wave 2 shifts bottleneck from the Wi-Fi side of the process back to the wired side of this deal.

The extra bandwidth here is especially useful when you’re transferring large files, or you need to sustain a higher speed.

To handle this high level of potential throughput, the four Gigabit LAN ports and the USB ports, D-Link gave the DIR-882 a dual-core Broadcom BCM4709C0 1.4 GHz chipset, with 256 MB of RAM and 128 MB flash.

This chipset has become a very popular platform. D-Link used it previously in its ‘Ultra’ designs, TP-Link put it in the Archer C3150 V2 and C5400, Netgear put in the Nighthawk X8, and Linksys and Asus have also both chosen it for their routers, too.

Router makers can take their products along two distinct paths; the simple and accessible route, or the complex and sophisticated way. D-Link traditionally likes simple solutions where its support staff won’t be asked massively complicated questions, and the DIR-882 was built from that perspective.

That makes this router easy to install and configure, as we had it working smoothly within just a few minutes.

The flip-side of how easy it is to set up is that there are some features omitted that some users might have expected to see.  But the menus are somewhat deceptive, as some features are just hidden, and not truly missing.

For example; being able to redefine the 2.4GHz and 5GHz channels under different SSIDs isn’t possible until you first disable the ‘Smart Connect’ option. 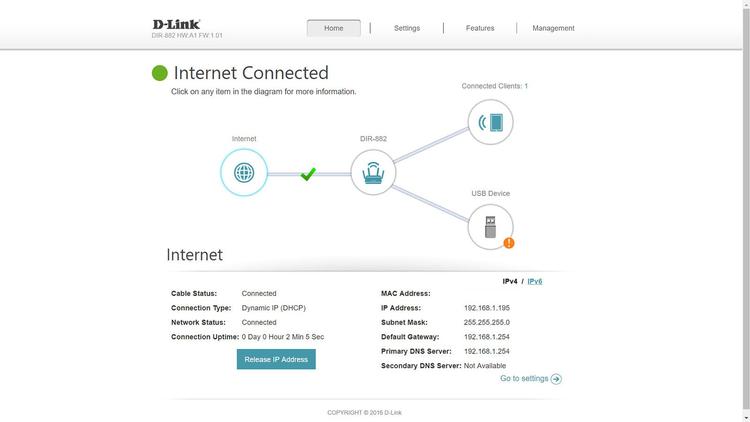 Even with tricks like that, the selection of features was trimmed down to those that are necessities. Therefore, the supported security modes include only WPA/WPA2-Personal or ‘none’, irrespective of what switches you throw on the web interface.

What it does offer is DNLA, FTP and SAMBA share on USB connected devices, turning the DIR-882 into small media NAS server of sorts.

Probably the most important feature they did include is a QoS (Quality of Service) system that allows you to dictate bandwidth limits on specific devices. Therefore a gamer can guarantee themselves bandwidth that can’t be pinched by someone else trying to watch a 4K video on Netflix.

The QoS interface dictates that only one device can be allocated ‘Highest priority’, where two more devices are blessed with ‘High priority’ and a further eight can be given ‘Medium priority’.

The feature that many users would have appreciated is an Access Point mode, where you could add this device to a wired network using the WAN port as merely an extra LAN socket. Sadly, this mode isn’t possible, even if you can manually configure an equivalent scenario.

The feature set firmly places the DIR-882 for home use, as the lack of more sophisticated security protocols among other aspects, undermines it for most business applications.

As with all WiFi products, the performance we experienced might not match what you might in your home. Inherently wireless networking can be impacted by numerous environmental factors that can interfere with the signals and make guaranteed speeds practically impossible.

That said, this is a fast router by most standards, and you can easily pull or push a file at more than 100MB/s using 5GHz at close range. Move a room away with a solid wall in between those numbers drop to 70MB/s, a very respectable speed. 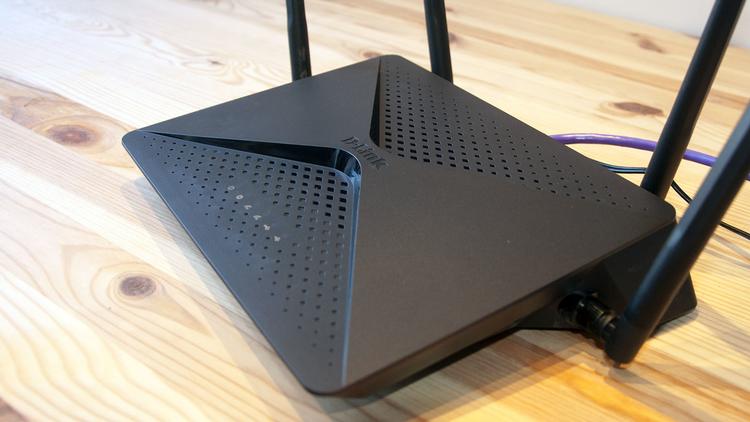 Those using the 2.4GHz frequency can expect 15MB/s nearby and 12MB/s a room away. What’s good about using 2.4GHz is that you can still get 10MB/s when outside the house, and remain connected a least 100ft or more away.

The only catch to this performance level is that we used a LAN connected server, and not the in-built USB ports to achieve those speeds.

Having tested a high-performance USB hard drive on the USB 3.0 port, the best speeds it achieved, even when connected through the Ethernet ports were in the 20-30MB/s range. That’s the sort of performance we’d expect from USB 2.0, and not anywhere near what a USB 3.0 should be capable of shifting.

Regarding the Wi-Fi connections, the DIR-882 isn’t the very fastest 802.11ac router we’ve tested, but it’s with 10 percent of the best numbers. That’s more than quick enough for most home users, and a great choice for anyone who plays games over Wi-Fi.

For anyone upgrading from an 802.11n router, or one of the less wonderful broadband-suppler 802.11ac offerings (think TalkTalk, Virgin and Sky), the DIR-882 is a solid upgrade.

However, don’t overlook some of the more affordable mesh Wi-Fi kits. Some cost only a little more than the DIR-882 and will provide better Wi-Fi coverage, if not the advanced QoS features.