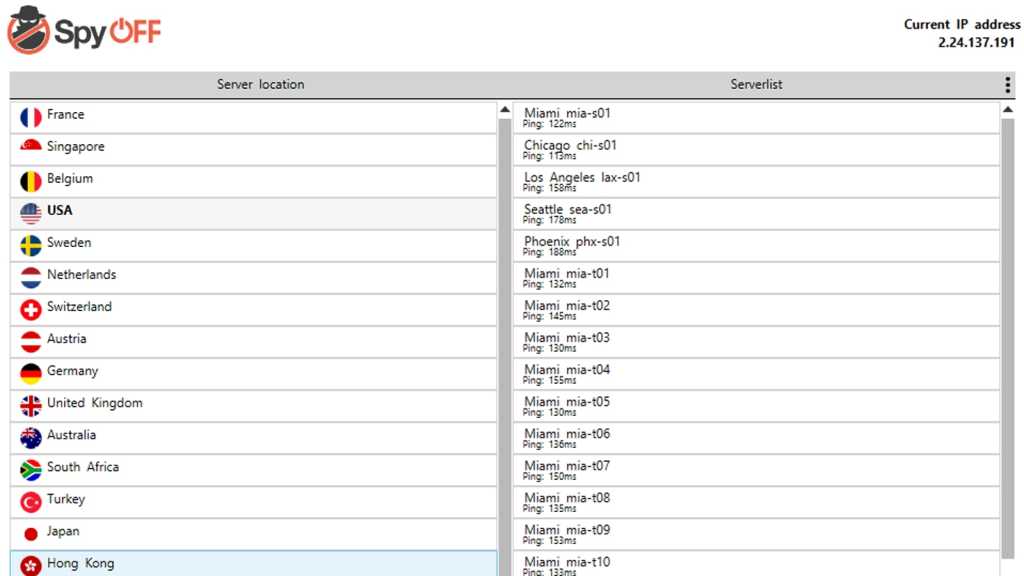 A fast, easy-to-use VPN of confused origin but unlimited simultaneous connections that will put off security advocates due to its use of less secure protocols and the perceived threat from the “14-eyes”.

If you’re looking to protect your privacy, and/or unlock blocked content, you might be looking for a VPN. You can find out more about VPNs in our round-up of the best VPNs of 2018, but here we review one example: SpyOFF.

The good news about SpyOFF is that you can connect as many devices as you like. This makes it good value for large families. Underpinning this is the Premium package, which weighs in at £6.99/month, also with unlimited connections.

The bad news is that though SpyOFF’s  parent company (FriendlyDuck) is based in San Marino, the support ticket submission page features German phrases. The online knowledge base is also in German and English, and the alternative to English in the user interface is German.

Curiouser still, the data logging policy says no data is logged due to a Berlin court ruling. This being the case, and in the absence of a reply from the parent company, I must assume it operates under the jurisdiction of the “14-eyes” countries rather than San Marino privacy laws.

Installation is a breeze, though every time I subsequently ran SpyOFF, it asked to make changes to my system, as if being installed again. This is no biggie, and possibly down to my laptop’s security settings.

The interface gives you three connection options: ultra secure, balanced and high speed. These choices refer to the protocols used, and apply to all servers in all countries.

The protocol used in the high speed connections is PPTP, however, which is not considered secure. Only use it for streaming, and never for things like online banking. Conspicuous by its absence is the IKEv2 protocol, which is a newer, highly-secure protocol found in many similar products.

The SpyOFF web site says there are 395 servers in 21 countries, but in the interface I counted 25 countries. I couldn’t access US-only content on Netflix, but foreign broadcasters were no problem. Connection setup and teardown is also fast, and there seems to be plenty of bandwidth on hand.

If you click Select Server Yourself in the options, then when you subsequently click a country, you get a list of individual server locations and their ping times.

There’s a kill switch to drop all connections should the VPN tunnel collapse and expose your traffic, but in line with so many other products, this is not activated by default.

Payment options include credit cards, PayPal and BitPay. There is a free 15-day trial, but the FAQ says that a $1 “hold” charge is applied to your card for between 48 and 72 hours to make sure the card remains valid, at which point the charge is removed. There’s also a 14-day right to cancel your contract buried in the small print.

Other supported platforms include Android, iOS, Mac, Linux and routers. The Android version is very simple to use. Simply install, log in, select a server and connect. When selecting a server, the whole list for a country is always presented.

Overall, if you’re just streaming foreign TV, SpyOFF may be for you. This is especially true for families with a superfast broadband connection and the need for multiple simultaneous streams from different countries.