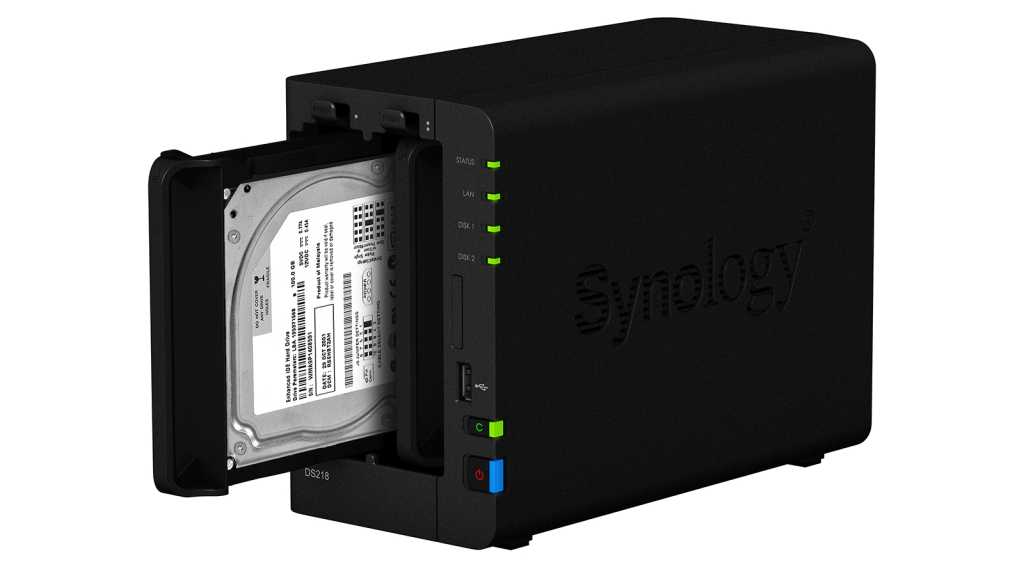 The fine irony of the DS218 is that seen in isolation it’s an excellent platform, but jammed between the DS218Play and the DS218+ leaves it little room for manoeuvre. With QNAP now offering Dual-LAN for less money and RAM upgradability, the DS218 needed to be less expensive or be similarly enhanced. The DS218 is a superb NAS enclosure but fails to outshine the DS218Play sufficiently to make it a no-brainer.

Synology is an established brand in home and small business Network Attached Storage (NAS). The company makes a huge range of hardware for all segments of this market, ranging from single drive devices up to massive rack-mounted systems that can accept hundreds of drives.

Within the Synology’s catalogue are seven different dual-drive solutions to choose. So what makes the DS218 a NAS enclosure that’s perfect for your needs?

These are all without drive prices, so you’ll need to budget for a couple of NAS friendly storage devices to go along with the cost of the Synology hardware.

The NETGEAR ReadyNAS 212 costs £236.76, and features a similar quad-core ARM Cortex A15 processor, but can only transcode 1080p video.

An interesting alternative is the QNAP TS-251+ at £292.40. It might cost a little more, but it not only transcodes 4K video but can even output it via an integrated HDMI port at 1080p.

For those that want a simple dual drive NAS box the Synology DS218 costs more than the Buffalo LinkStation 520 4TB with 4TB (2x 2TB) of hard drives pre-installed, but then this device can do considerably more. 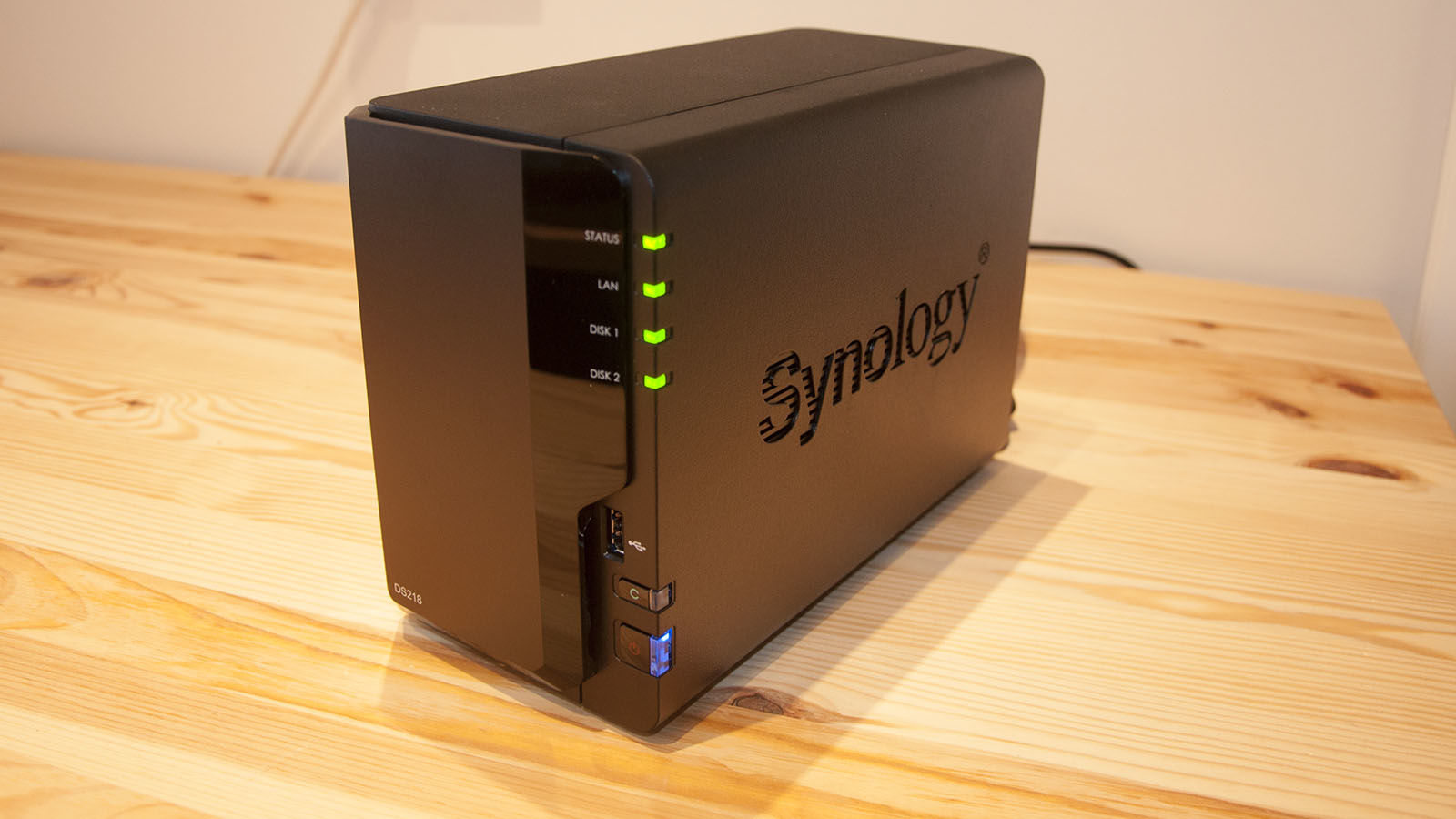 After having much the same appearance for at least five years, the latest Synology NAS boxes have recently undergone a makeover. The new look has a signature glossy front cover that detaches to reveal the internal drive bays, rather than having them exposed.

The fascia cover has changed shape from the prior DS216, but few other differences exist externally. Both the new DS218 and the older DS216 have an external USB 2.0 port at the front, and a button to transfer the contents of an inserted storage device. 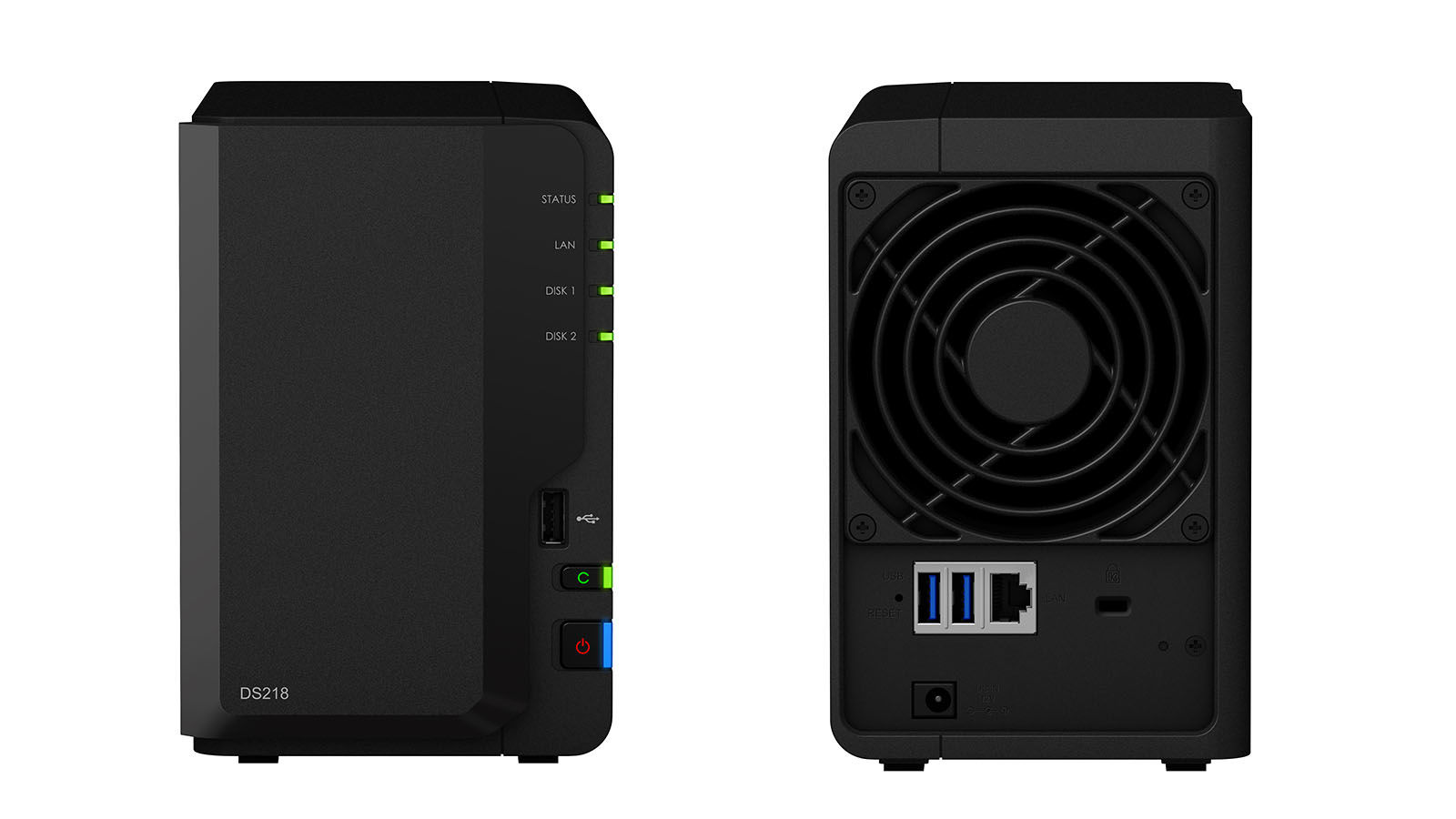 And at the back, they also have two more USB 3.0 spec ports and a single Gigabit LAN port. The greater changes are all inside, where the DS218 has been improved in numerous ways from the box it replaces.

Where the DS216 got a dual-core Marvell Armada 385 88F6820 clocked at 1.3GHz and just 512MB of DRR3, the new DS218 gets the much meatier Realtek RTD1296. That’s a four-core 1.4GHz ARM SoC that gets 2GB of DDR4 RAM to lubricate operations and has significantly better video processing and encryption capabilities.

That’s more than enough processing power for the two 3.5” drives (or 2.5”), with a maximum capacity of 24TB using dual 12TB mechanisms. 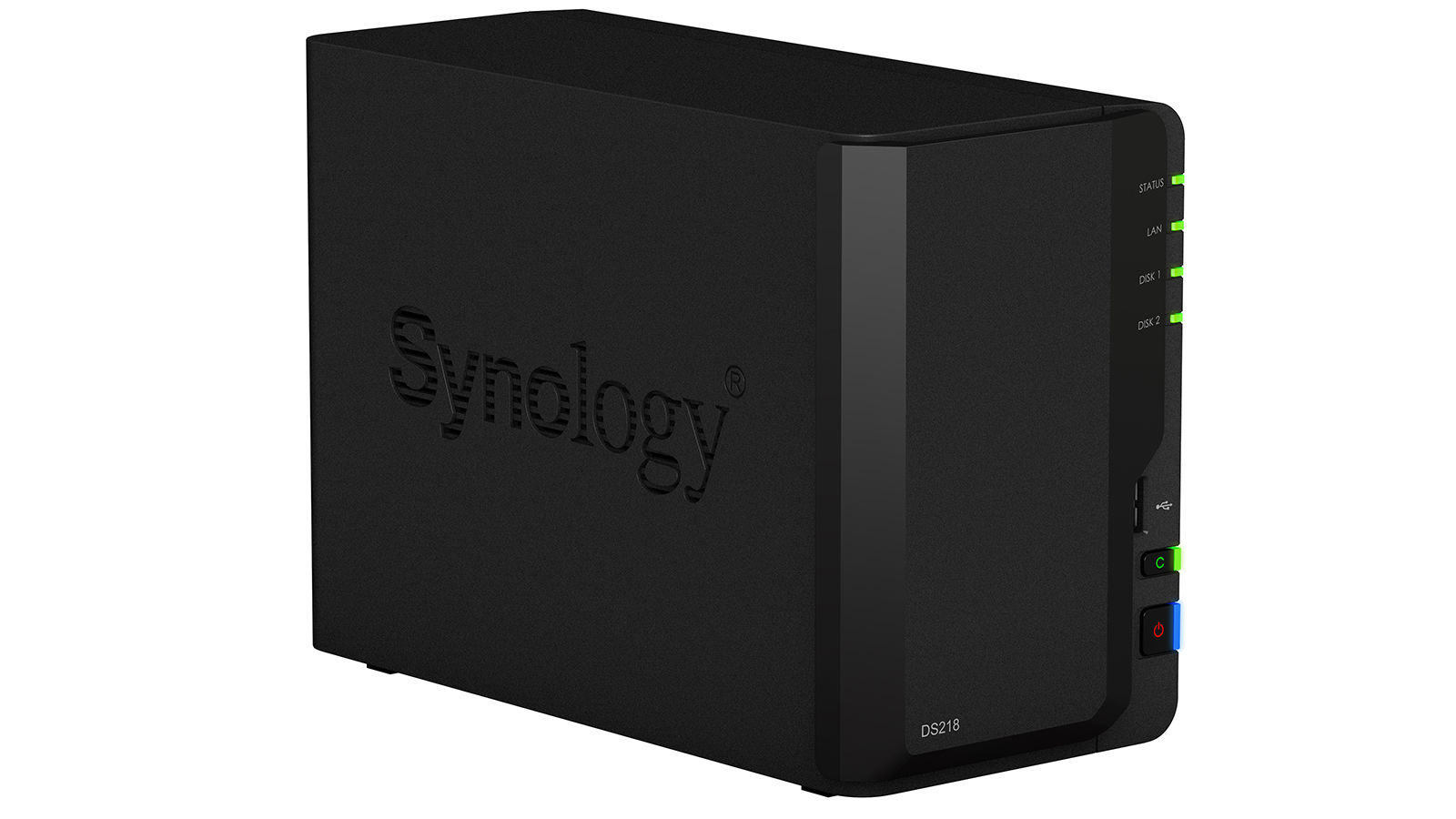 The only specification disappointments here are that the 2GB of DDR4 isn’t expandable and that they decided to include only a single LAN port. Those choices ultimately constrain the not inconsiderable power inside the DS218.

If there is one reason for the success of Synology in NAS, it’s the great range of applications that they support for their DSM operating system. Where most of their NAS boxes can run a core collection of apps, there is a threshold of memory and performance needed to run all of the available tools or more of them simultaneously.

The selection on the DS218 is 41 Synology crafted applications and 46 third-party, including favourites like Joomla, WordPress, Apache Server,  SugarCRM, PHP (5.6 and 7.0), Drupal, Python, Ruby and OpenERP.

It is a major selling point of this brand that their NAS hardware can easily be repurposed as a mail server, file server, media streamer, surveillance camera controller, to mention just a few possibilities. With the power of a quad-core 64-bit SoC, the DS218 has a wide scope to handle more than one critical task without bogging down.

To support this inherent flexibility Synology is continually expanding and upgrading its app selection to offer even wider options. One tool that we noticed has recently undergone an upgrade is Hyper Backup, a multi-target backup tool that can secure the drives on the DS218 to numerous locations.

To this impressive list of choices, Synology has now added a new homegrown service called ‘C2’ that aims to offer a very competitive means to secure personal data at minimum cost.

Once secured to Synology C2, files can be accessed securely from any browser in an emergency, and multiple file versions allow the recovery of older instances should the latest version become corrupted or maliciously encrypted.

It will be interesting to see if Synology’s divergence into Cloud Storage is successful in what looks like an increasingly competitive sector.

Gauging performance on dual drive NAS boxes is inherently problematic, as their bandwidth throttled by Gigabit LAN speeds and only having two drives in their array.

That said, the DS218 delivered all that Gigabit Ethernet effectively has available, with 118.4MB/s reading and 117.8MB/s writes. The drives in the DS218 during this test were two 4TB Seagate Iron Wolf mechanisms organised in a redundant Hybrid RAID pack. 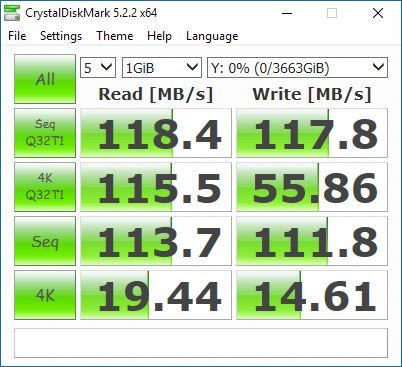 A few years ago these speeds would have been a major talking point, but on this hardware we noted that the Realtek RTD1296 1.4 GHz SoC wasn’t working hard to flood the network, allowing plenty of CPU cycles and RAM to be utilised by other tasks.

That’s a single 4K stream, though given less demanding 1080p transcoding duties it can handle multiple jobs simultaneously without dropping frames of desynchronising audio. On paper, the Intel chips that are in some Synology boxes are more powerful, although they don’t compare well with this SoC for video transcoding duties.

The bottom line is that this is a very quick machine that’s ideal for a home or small office where it is highly unlikely it will ever become overwhelmed by the typical tasks of that environment.

There are a few questions about how the DS218 fits with what hardware Synology has already released, and the inherent overlaps it creates. Below the DS218 are the DS218j and DS218Play, and both these alternatives take the same number of drives, have a single Gigabit LAN port and cost marginally less.

Above it is the DS218+ and DS718 that are both based on Intel Celeron processors, have memory expansion slots and cost significantly more. The problem part here is the DS218Play, because on paper this is incredibly close to the DS218 with some minor exceptions, but is cheaper. 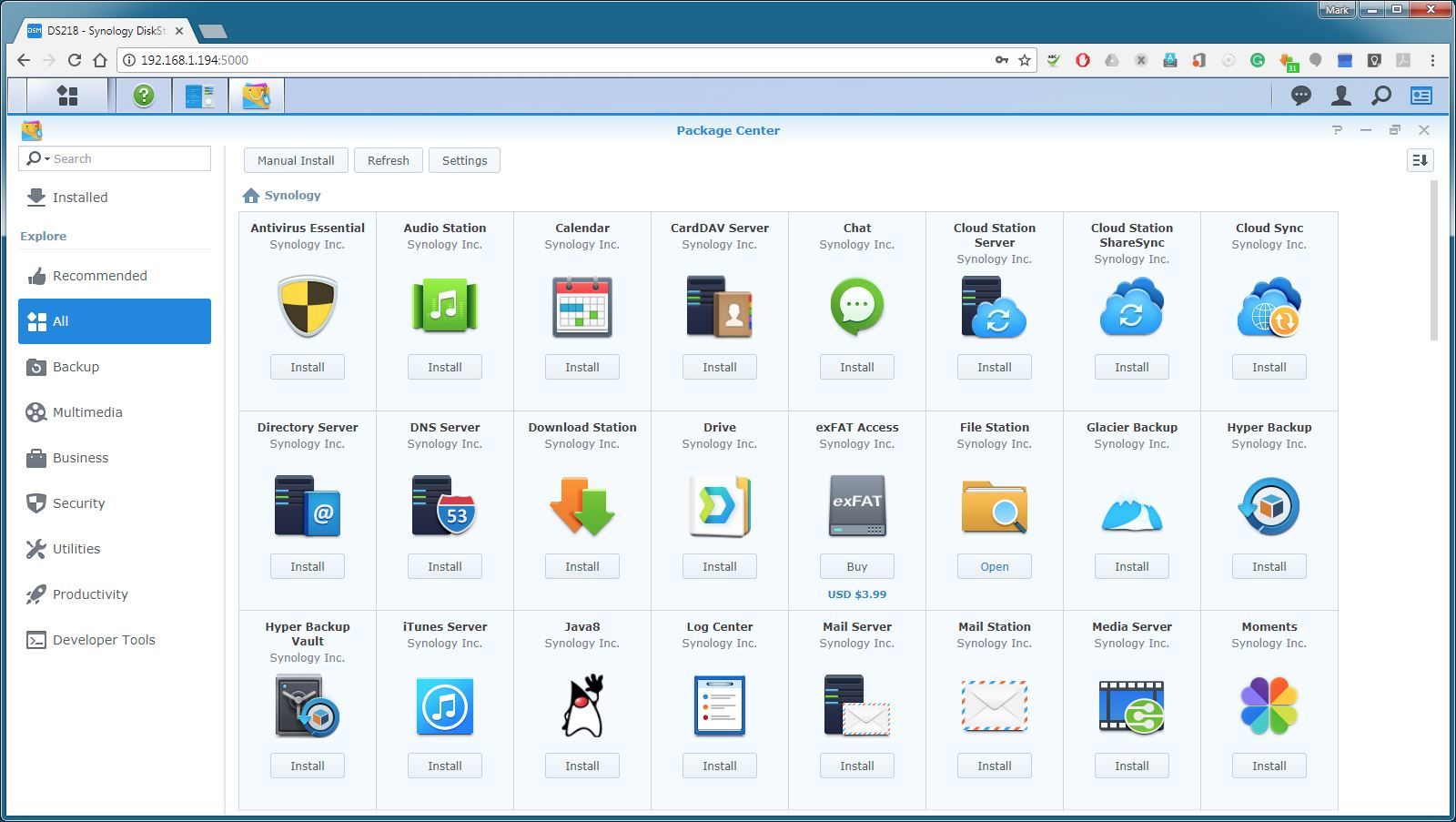 The DS218Play has an identical processor, and therefore 4K video transcoding capability, yet only 1GB of RAM, not 2GB. There are some other very subtle differences to do with the number of concurrent download task, maximum VPN connections and Maximum IP cams supported, but there is only one big separation other than the amount of RAM, and that’s the DS218’s front USB port.

The port and the copy button are exclusive to the DS218, although its usefulness is questionable because they made it only USB 2.0 spec.

Because of this, the transfer speed from any USB 3.0 flash drive is likely to be slower than if you attached it to a PC USB 3.0 and copied the files across the network.

The reason that port isn’t USB 3.0 is the Realtek RTD1296 SoC, as it only supports the two USB 3.0 ports Synology placed on the back. However, it also has PCIe channels, so adding more USB 3.0 ports wasn’t entirely impossible. 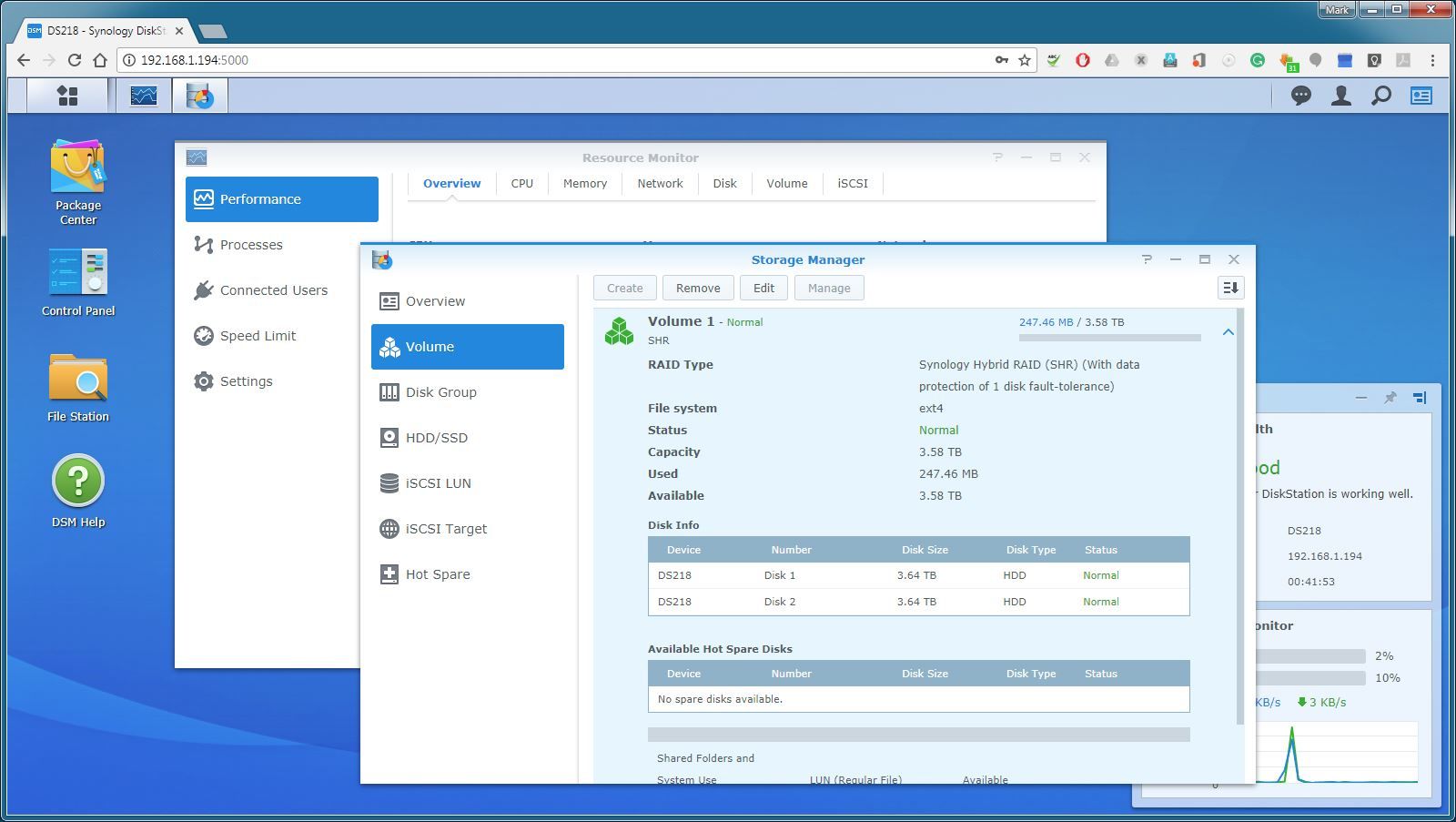 In the final analysis, the DS218 hasn’t got a compelling argument over the DS218Play for many customers, and for those that don’t need transcoding, the DS218j is fine.

We’d contest that the DS218 or its DS218+ brother should have had dual LAN ports, eliminating the need for the DS718+. And, that highlights the issue here, because this product range has become congested in places, where new models can’t get the upgrades they need for fear of stepping on other product’s toes. 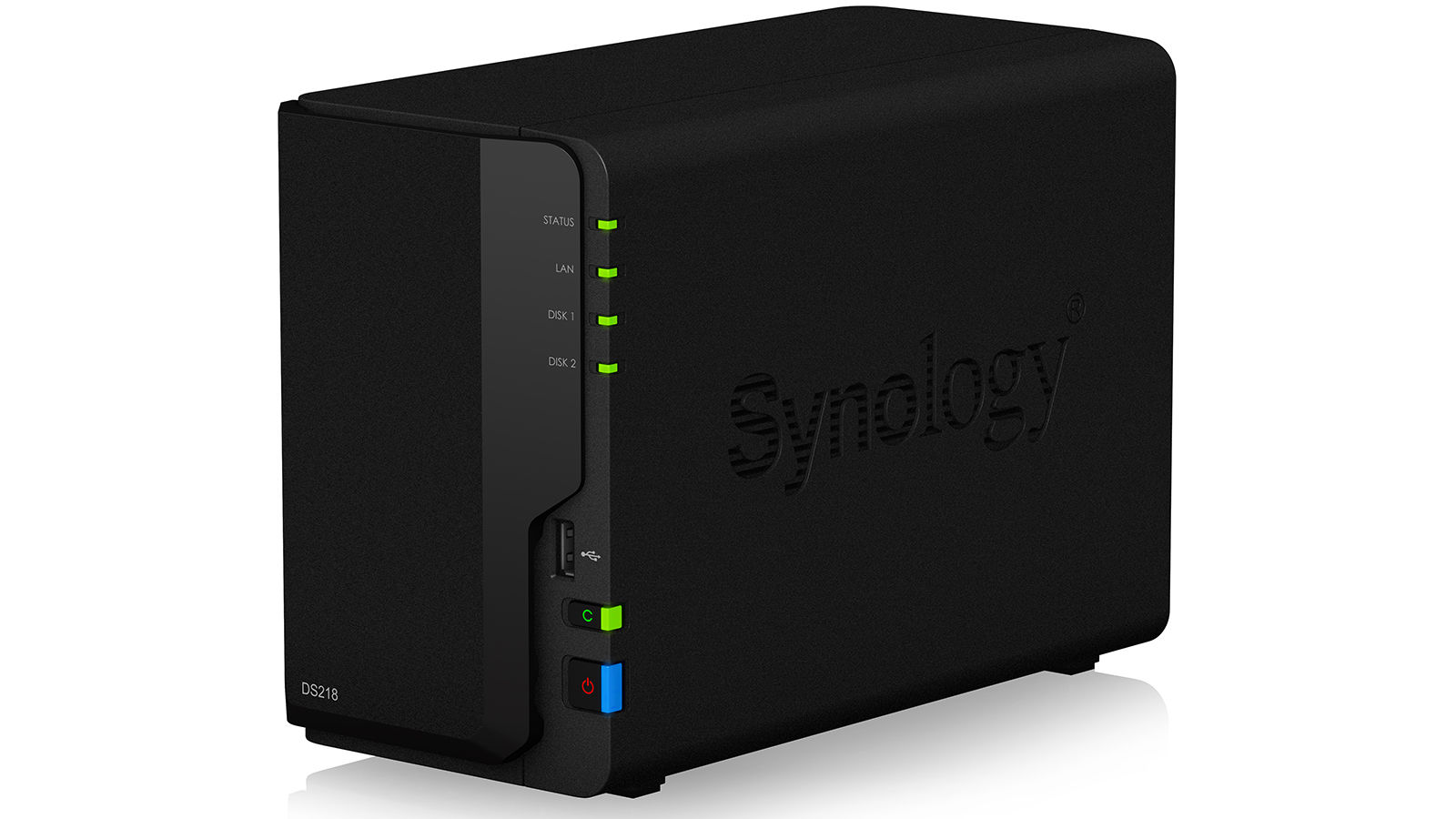