Although you may not consider it cheap, the Mavic Air is astounding value for money. It’s the most advanced consumer drone you can currently buy and shoots great-quality video and panoramic photos. The Quickshot modes are brilliant, there’s best-ever obstacle avoidance and it’s small enough to carry everywhere with you. Ultimately, this is the drone you’ve been waiting to buy.

DJI is on a roll at the moment. GoPro tried to compete and failed, and it’s hard to think of any other consumer drone manufacturer that’s even a serious rival. So the launch of the Mavic Air reasserts the Chinese firm’s dominance, but the sheer range of drones is getting a little overwhelming.

Essentially, the Mavic Air is a baby Mavic Pro: a smaller, lighter and more portable version. It’s also cheaper, which means there isn’t really a reason to buy the Mavic Pro any more.

That’s the base model, but as with other DJI drones you can also go for the Fly More Combo which includes three batteries, more spare propellers, a multi-battery charger and a carry case.

You can choose from Artic White, Onyx Black and Flame Red. Both packages include prop guards for indoor flying, something you don’t get with the base model of the Spark.

The Air is about half the size of the Mavic Pro and it weighs 430g. That’s over the weight limit under which drones don’t have to be registered in the US with the FAA, but it’s very light for a 4K-capable drone.

The standard kit includes a zip-up case for the drone only, but the remote control has detachable sticks so it’s the slimmest yet. The sticks fit into little recesses on the bottom of the controller, but there’s a spare pair in the box in case you lose them. 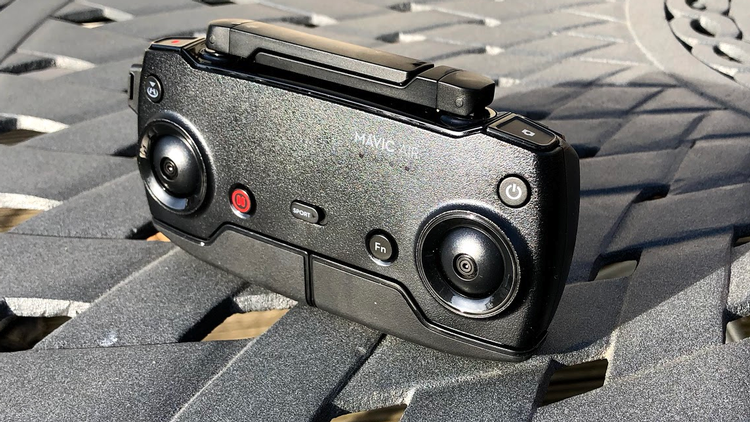 Presumably to save cost, the LCD display from the Mavic Pro’s controller has disappeared so the Air’s remote is much closer in design to the Spark’s.

Getting back to the drone, the arms fold up much like the Mavic Pro, but the propellers don’t fold as they don’t really need to.

The battery unclips from the bottom and there’s a USB-C port and microSD slot under a flap at the rear, similar to the Spark. The battery occupies most of the space within the body, so it’s remarkable that all the electronics fit into such a tiny space. 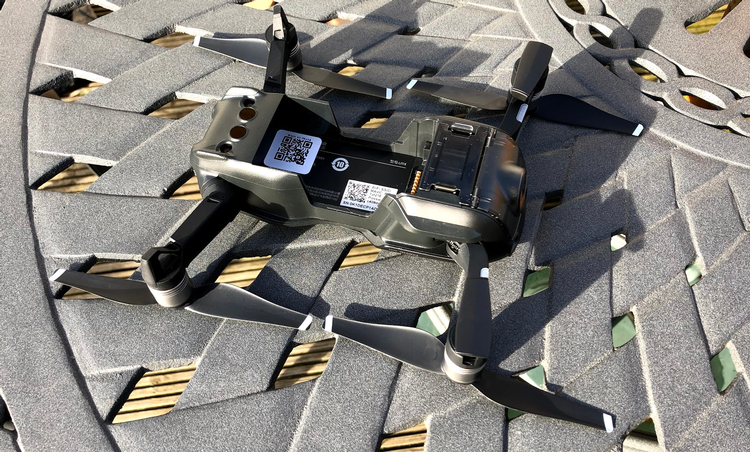 A real bonus is the 8GB of on-board storage which allows you to record at full quality even if you forget your microSD card, though you’ll probably want to step down from 4K30 at 100Mb/sec as that’ll eat up 8GB in about 10 minutes. 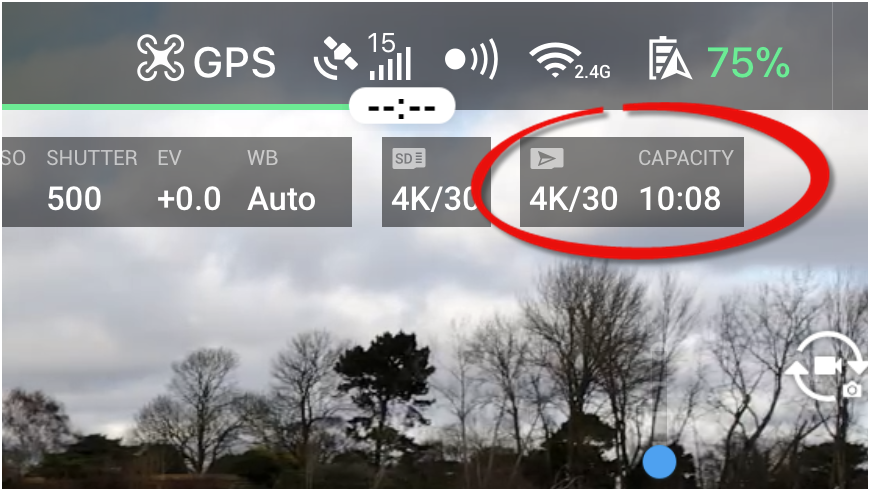 It won’t automatically record onto an SD card so you have to go into the settings and choose this rather than Internal Memory.

Amazingly, the Air gets a better obstacle avoidance system than the Pro. There are front and rear cameras, plus downward-facing sensors so there’s a decent chance this drone will avoid crashing into trees and other things – even when flying backwards.

There’s also a new APAS mode (Advanced Pilot Assistance System) whose aim is to fly around obstacles as you fly rather than stopping dead. This is a new icon on the main screen which lets you toggle the mode on and off.

Obstacle detection is slightly improved so the Mavic Air can detect them up to 20m away, instead of 15m for the Mavic Pro. It worked well in our tests, but as before, it isn’t a cast-iron guarantee it won’t crash into anything: thin branches can still fool it and it can’t see glass (bear this in mind when flying indoors).

The camera itself is said to the be the same as the Mavic Pro’s, topping out at 4K30, but offering 120fps at 1080p for great slo-mo. It’ll capture 12Mp photos, and will save them as lossless DNGs if you choose. 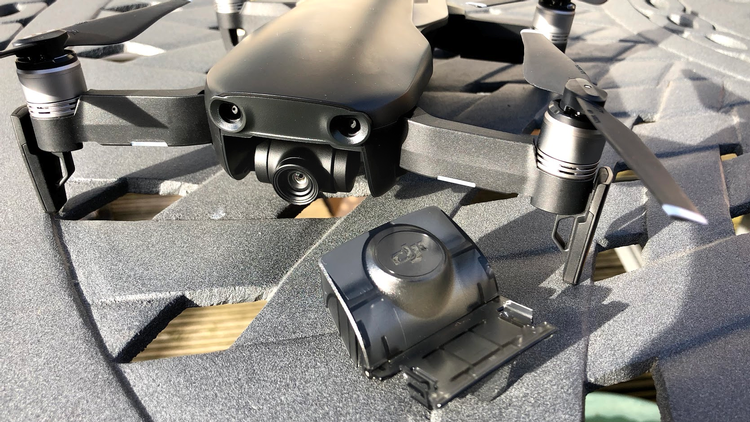 It hangs on a very similar 3-axis gimbal which is better dampened than on the Mavic Pro to keep it steadier in flight. The whole assembly is protected by a hinged plastic cover that’s much easier to install and remove than on the Mavic Pro, but it can’t be left in place during flight.

Introduced with the Spark, but added to the Mavic Pro, Quickshots let you pick from several cool automatic flights which all give wonderful, cinematic results that would take years of practice to do manually.

The Mavic Air introduces two news ones, which may or may not be rolled out to other DJI drones. The first is Asteroid. This flies up and away from you, then takes a 360° panorama by snapping 25 photos high in the sky.

Second is the Boomerang which does pretty much what it says: it flies away from you, starts recording and flies in a boomerang shape to the other side of you. You can choose whether the move goes clockwise or anti-clockwise.

There are of course many other ways to fly the Mavic Air, but one of the most-used will always be ActiveTrack. This is also used for Quickshots: you draw a rectangle around yourself (or something else) to keep it in the middle of the frame while the move is executed.

ActiveTrack on the Mavic Air is better able to keep a lock on multiple subjects even when they’re moving quickly on a bike or another quick-moving sport.

It’s one of the most advanced consumer drones you can buy.

As with the Spark, you can launch the Mavic Air without the controller or even a phone. Using gestures you can get it to take a photo, or start video recording. New gestures allow you to control the drone’s distance from you, follow you and land.

Although these make for a great party piece and mean there’s no phone or controller in sight in the resulting video, it’s still not 100 percent effective and it’s easy to feel out of control when the Mavic Air doesn’t respond perfectly to your gestures.

It’s best to use the prop guards if you’re going to try SmartCapture with other people around and practice so you know the gestures well first.

The Mavic Air is compatible with DJI’s Googles (which are now cheaper but no less clunky) and will deliver a 1080p video stream to them – or a phone connected to the Air’s controller – up to a distance of 2.4 miles. That’s less than the 4.3 miles you get with a Mavic Pro, but for most people, the difference will be irrelevant.

That’s the US version: European models are limited to 1.2 miles because of EC regulations. But in any case the Dronecode requires that you keep your drone in your line of sight at all times, so the extra range beyond around 500m is only usable if you have permission from the CAA.

Flying the Mavic is extremely easy, and it feels like flying just about every other recent DJI drone. Performance is deliberately limited unless you switch to Sport mode in order to keep the props out of the frame, but they’ll still be just visible if the Mavic Air is fighting against particularly strong winds, or you fly aggressively.

In normal calm conditions, it’s a joy to fly as it hovers in place and is very responsive to even small stick movements. Flying far away always gets nerve-wracking but we found the video feed was rock solid and the great quality meant it was easy to see which way it was facing.

Plus, there’s the reassurance of the return-to-home function which you can invoke yourself, or will kick in automatically if the signal from the controller is lost for too long.

We got almost exactly 21 minutes from a fully charged battery, which is about 6 minutes shorter flying time than a Mavic Pro. Considering the reduced size and weight, that’s a compromise most people will be happy with, and you can land, swap batteries and be back in the air in a couple of minutes.

In terms of video and photo quality, it was hard to notice any difference or, specifically, any compromises compared to the Mavic Pro’s quality. 4K footage looked fantastically sharp on our Philips 272P 4K monitor, and had great colours in the default mode.

Bear in mind you’ll need a beefy PC or laptop to play back footage at this resolution and bitrate. DJI’s app automatically saves a low-resolution version of all footage to your phone – including Quickshots – but you can download the originals as well. But again, you’ll need a powerful phone to edit that top-quality video.

Here’s a photo taken in the standard 12Mp mode (resized but otherwise untouched): 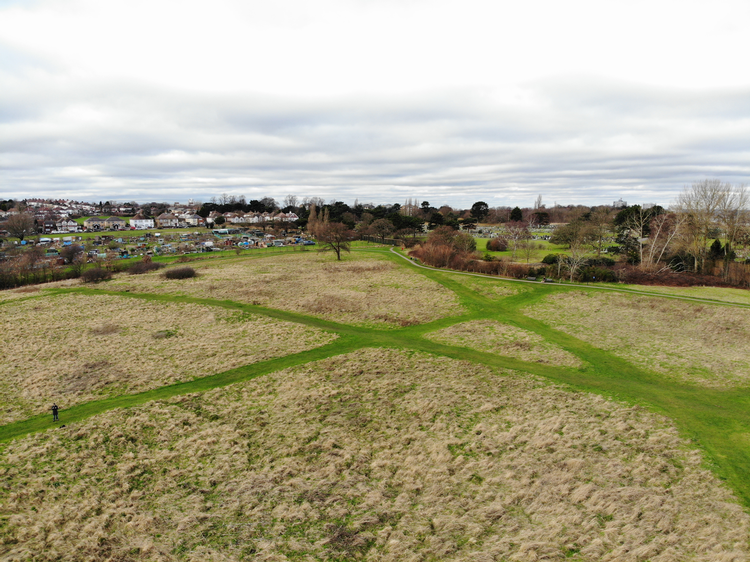 It’ll take three types of panorama, including a 360° sphere, horizontal 180° and vertical. Here’s the horizontal, again resized, but not edited: 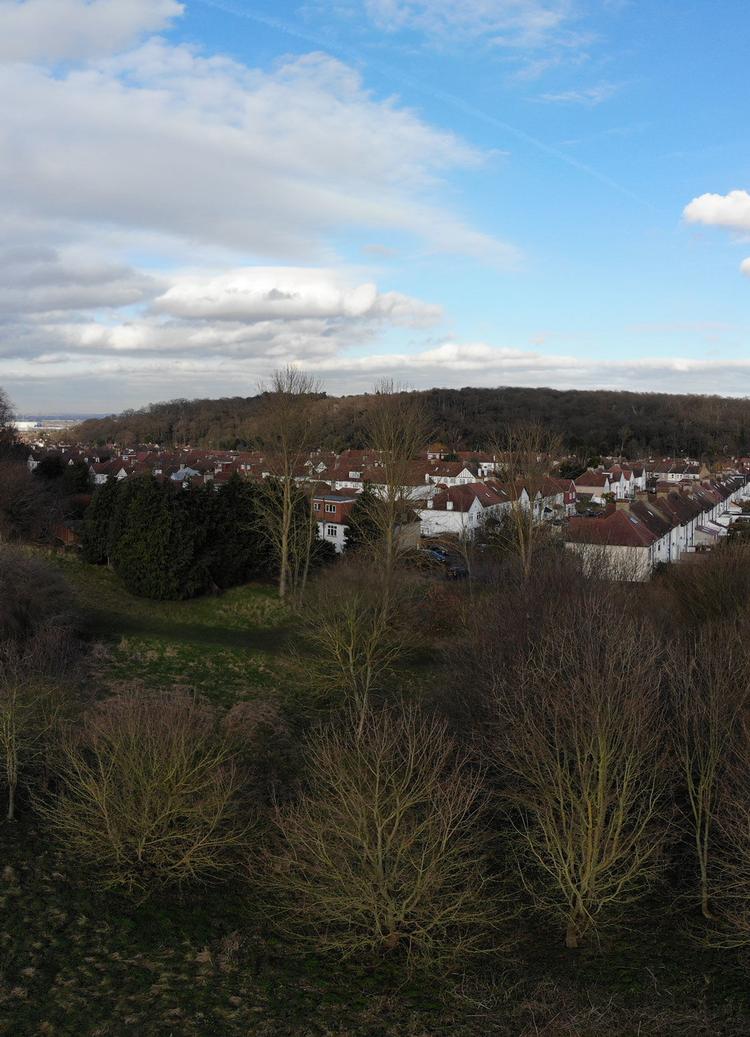