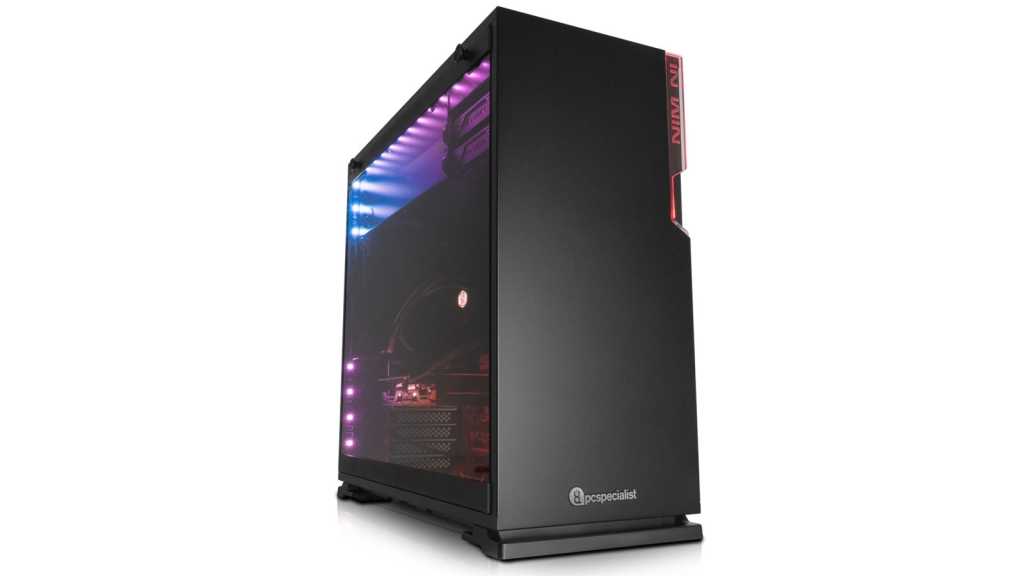 The PC Specialist Vanquish Goliath delivers superb desktop computing performance combined with Ultra quality gaming at 1080p. However, it’s not the best deal for gamers after the fastest frame rates for their money.

It comes with a high-end Intel 8th-gen ‘Coffee Lake’ processor, coupled with an Nvidia GTX 1070 installed in an Asus Gaming motherboard and is capable of delivering Ultra-quality gaming at 60fps in 1080p and beyond, so it’s ideal for playing today’s demanding AAA games.

This means you don’t get to customise the machine by picking and choosing individual components as you would when purchasing directly from the manufacturer.

The Vanquish Goliath is constructed in an In Win 101 system case featuring clean, minimalist lines and a full-width tinted tempered glass panel forming the entirety of the left side of the case.

The front, however, is left entirely blank giving it a tidy, no-nonsense appearance – and no room for any external drive bays or optical drives. It also features a translucent tab illuminated in red and bearing the In Win logo, beneath which sits a rather well-concealed power switch.

The most striking feature of the case has to be that huge glass side panel which is perfect for showing off the PC’s various self-illuminating internal components, to which PC Specialist has added two 50cm user-controllable RGB LED lighting strips.

Access to the inside is quick and entirely tool-free thanks to In Win’s simple fastening system which replaces tiresome screws with simple plastic latches.

A similar system holds the other side panel in place, which features an attractive honeycomb grille providing ventilation out of the side of the case. This grille lines up with the fan mounting points inside which would more usually be fitted at the front.

Opening the case reveals relatively tidy internals, thanks to a top-mounted compartment which hides the Corsair VS-450 power supply from view along with much of its cabling which is routed behind the motherboard.

Next to the power supply are two transverse-mounted tool-free 3.5in drive bays, one of which holds a 1TB 7,200 RPM hard drive.

Thanks to the latest Core i7-8700K processor, the Vanquish Goliath delivers not four, bit six processor cores and a total of twelve threads thanks to the Core i7’s Hyper-Threading feature. This is a very high-performance processor capable even of outperforming Intel’s more expensive Core i9 processors when running many typical desktop-based applications.

The Core i7-8700K starts with a base clock speed of 3.7GHz with a maximum single-core turbo speed of 4.7GHz. When all six cores are going flat out, they can reach 4.3GHz without overclocking.

This is a huge step up from the previous generation of Core i7 processors which featured only four cores. As usual, the ‘K’ designation denotes an ‘unlocked’ chip which can be safely overclocked to achieve even higher performance.

PC Specialist has chosen not to overclock the processor in this PC, but the Core i7-8700K still delivers better performance than the locked Core i7-8700, thanks to its slightly higher stock clock speeds.

The processor is fitted with a Cooler Master MasterLiquid Lite 120 with its radiator and 120mm mounted at the rear of the case. It’s matched with another 120mm fan mounted on the side of the case behind that honeycomb grille we mentioned earlier.

This cooler runs quietly and keeps the center of the motherboard clear of clutter for a better appearance through the side panel. It also features a while illuminated ‘Cooler Master’ logo which complements the system’s other lighting effects.

Of course, when it comes to gaming, a powerful CPU is only part of the recipe and PC Specialist has ensured strong performance by installing an Nvidia GTX 1070 graphics card.

As you’ll see from our performance results below, the GTX 1070 is a very competent graphics card and the Zotac GeForce GTX1070 Mini 8GB used here is no exception. However, we do have to question the selection of this particular graphics card given the specification and price of this PC.

While the performance of the various GTX 1070s on the market is broadly very similar, this particular ‘Mini’ card is built primarily to be small rather than fast and therefore doesn’t take full advantage of the space available in the case. A physically larger card with better cooling may be able to run cooler and quieter than this model under heavy loads. It would also have been nice to see a card with Aura RGB lighting to match the motherboard, such as an ASUS ROG Strix GTX1070.

This card would add a noticeable cost to the system, but we wouldn’t expect to find many gamers willing to pay for an expensive Core i7-8700K – a processor we’d usually expect to find paired with a GTX 1080 and above- trying to save money by buying a low-cost GTX 1070 like Zotac Mini.

Alongside the processor and graphics card, PC Specialist has installed a 250GB WD Blue M.2 SSD as the PC’s boot drive. While this is a fast drive by SATA standards, the motherboard is capable of using much faster NVMe drives although, again, that would have added more cost.

The majority of gamers will be happy with a SATA drive but, again, anyone buying this PC is spending money on a top-of-the-range processor which we feel deserves the fastest supporting components.

Also included is a plug-in Wi-Fi card for those who don’t like trailing cables. However, this is a budget 802.11n version with only 300Mbps performance. It’s likely still faster than your broadband speed, but another odd compromise in a PC at this level.

The powerful six-core processor found in the Vanquish Goliath equips it with plenty of grunt for gaming, but ultimately it’s the GTX 1070 which will determine frame rates in graphically intensive games.

When playing AAA games at 1080p, you can expect performance in excess of 60fps with ‘Ultra’ settings and even step up to 1440p in some cases, although you may need to come down a notch to ‘high’ quality on more demanding titles.

We recorded an average of 62.3 fps in Deus Ex Mankind Divided at 1080p Ultra and 56.8 fps when stepping up to 1440p. Many older games, such as Alien Isolation, run much faster.

As mentioned earlier, the Vanquish Goliath uses a SATA-based SSD. This achieves 209 MB/sec in the PCMark 8 Storage benchmark, which is on the slow side for a PC at this price point.

Replacing the SSD with an, admittedly more expensive, NVMe-based SSD could result in around three times the performance.

Outside of gaming, the Vanquish Goliath is extremely fast. With a PCMark 10 Score of 6946 and PCMark 8 Home scoring 5349, it’s one of the fastest PCs we’ve tested, even beating expensive 10-core Core i9-based systems at many common tasks.

However, the 3.7GHz Core i7-8700K here is only realising part of its potential. As an ‘unlocked’ chip, it’s designed to be overclocked, and speeds as high as 5GHz are often achievable when sufficient power and cooling are provided.

The Asus gaming motherboard used here provides easy overclocking facilities to enable you to boost the processor speed yourself, but the single-fan cooler and 450W power supply installed in this system, although perfectly good for running at stock speeds, aren’t ideal for pushing such a CPU to the limit with overclocking.

The PC Specialist Vanquish Goliath comes with a three-year warranty with one year’s cover for parts and a one month collect and return service. Lifetime telephone support is also provided.

This level of warranty is typical for a gaming PC, but we’ve seen much better warranty terms than this included as standard from other vendors. In fact, PC Specialist offers a full year’s collect and return service for only £5 extra on PCs bought directly through the company’s own website.

The PC Specialist Vanquish Goliath is a powerful gaming PC, but its core components have been selected in such a way that will limit its appeal to many potential customers.

The Core i7-8700K processor is extremely powerful but, unless you need that level of performance for non-gaming tasks, for example video editing, it’s going to be overkill when paired with a GTX 1070.

Stepping down to a Core i5-8600K would leave you with enough money left over to upgrade the graphics to a much faster GTX 1080, giving you significantly better gaming performance for the same overall price.

This PC is therefore not for the gamer who wants to get the best gaming frame rates for the money. What the Vanquish Goliath offers is an incredibly powerful PC for video editing, content creation and live streaming, combined with the ability play AAA games with Ultra quality settings at 1080p.

If this performance is what you seek and you don’t want to venture into overclocking, then this is the PC for you. It’s priced a little lower than PC Specialist’s custom-built systems, making it pretty good value for money, and you don’t have to wait several days for it to be built to order.

For everyone else, we recommend going directly to pcspecialist.co.uk where you can customise your own PC and select components which more closely match your needs. This will also give you access to enhanced warranty terms and pre-overclocked options which can significantly improve the performance you get for your money.