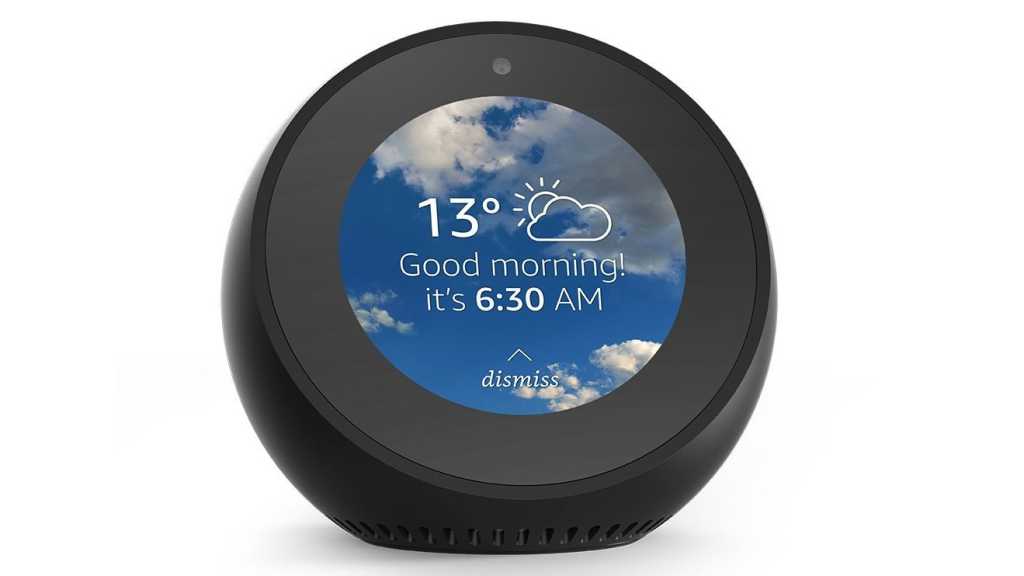 The Echo Spot is another great piece of hardware from Amazon, and the screen adds genuinely useful information for most things you ask Alexa. It’s also half the price of the Echo Show when bought as a two-pack. And if you want a screen and will use the Drop In capability, it’s good value. If not, the Echo Dot still does a lot for £49.99.

When Amazon released the Echo Show, many thought it was too expensive, too big and – dare we say – ugly. So if you were hankering after an Alexa speaker with a screen but didn’t like the Show then the Echo Spot might fit the bill. Also see our guide to the best Echo deals here.

It’s dinky and has a cute circular screen on which it displays a clock, song lyrics, a weather forecast and a lot more. Alexa works well as an audio-only device, but the screen allows her to give you more information or, if not more, then prettier information.

Amazon calls it ‘glanceable’ which is a good description, as it happens. You’ll see news headlines, the time and the weather all in a format you can take in with just a glance.

Black Friday deal: The Echo Spot is discounted in the Amazon sale down to just £89.

It’s more expensive than a second-generation Echo, which costs £89.99, but when you factor in the screen it makes sense and isn’t bad value at all.

It comes in black or white, but it’s a shame Amazon doesn’t make it in other colours and didn’t opt for swappable shells as with the Echo 2.

In a  YouGov survey published in April 2018, it was revealed that Amazon’s Echo family still holds 75% of the UK smart speaker market.

The Spot is neatly designed: a perfect sphere with the bottom and front chopped off at an angle. The three buttons are flush-mounted on top so they don’t break up the smooth surface and there are four holes around them for the far-field microphones.

Two buttons are for volume while the third mutes the microphone and disables the camera for privacy – an important factor when you’re likely to place it by your bed. Around the back is a power connector and an aux output for connecting an external speaker. 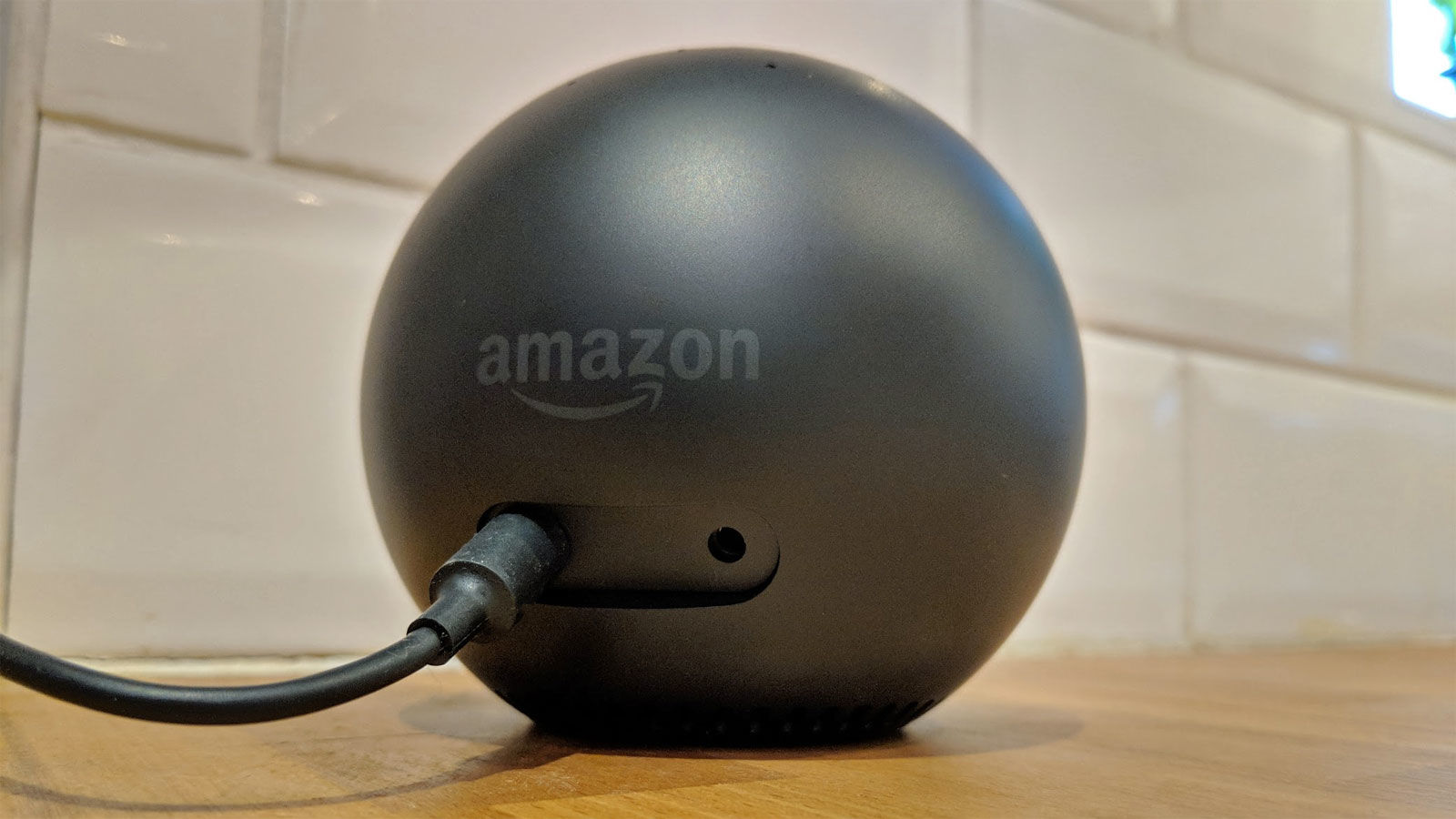 The screen measures 2.5in in diameter, which isn’t a whole lot bigger than the 3rd-gen Nest thermostat at 2.1in. But it’s enough to read the time at a distance and headlines. Other content, such as song lyrics and a three-day forecast, requires you to be closer though.

Resolution is high enough that everything looks sharp, and it’s bright and colourful. A sensor adjusts brightness according to ambient light and you can set a ‘night’ period where the screen dims – ideal if you decide to use it as a bedside alarm clock. 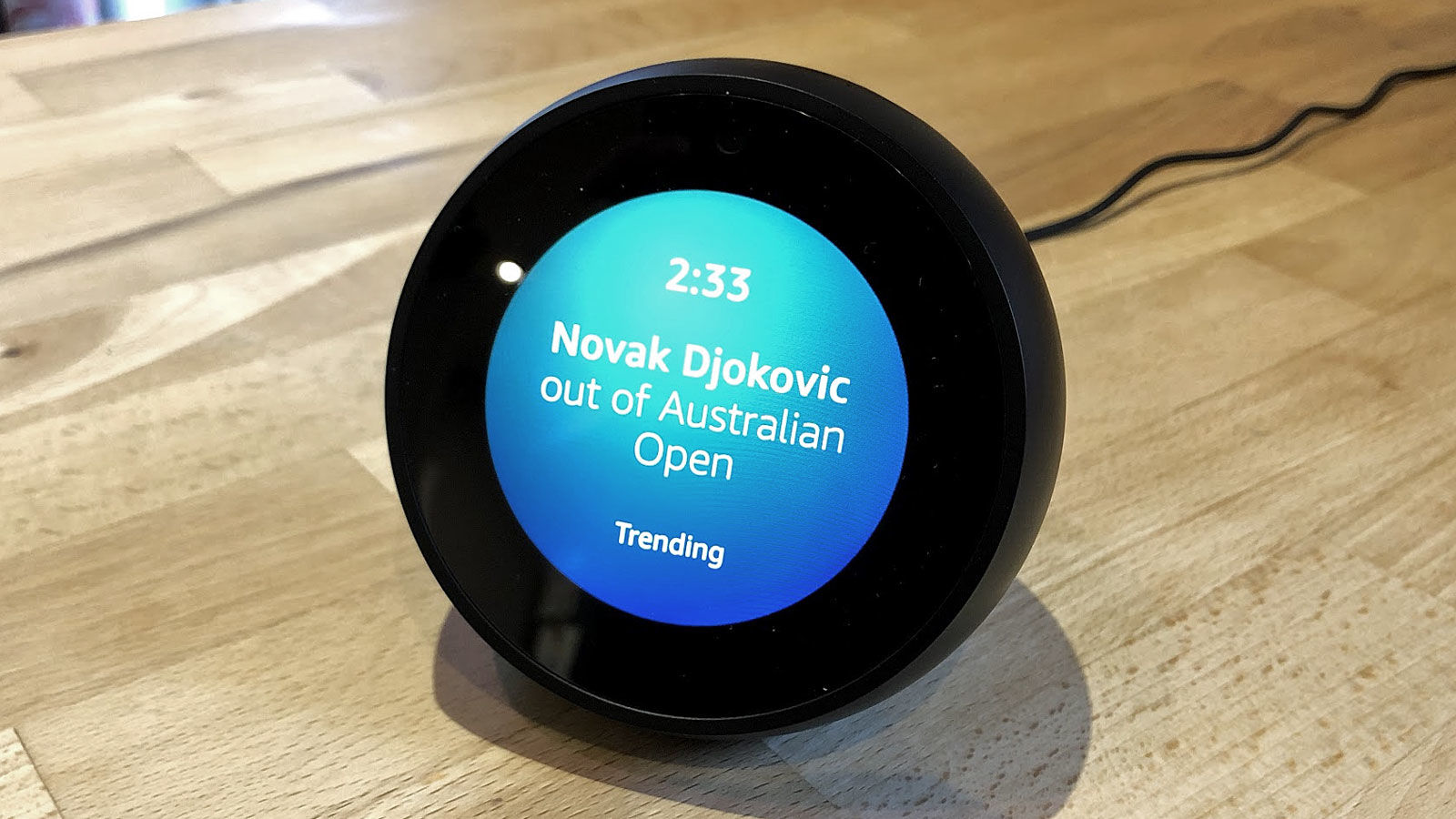 Of course, the Spot can be used anywhere and we found it was just as useful on a kitchen worktop or shelf. You might even choose to put one on your office desk so you can keep an eye on a security camera at home.

That happens to be one of the Spot’s tricks: it works with an increasing number of manufacturers including Negear Arlo, EZVIZ (US only), Nest, Logitech and Ring so you can say “Alexa, show me the front door” and the video feed appears after a few seconds – cropped to fit the circular screen – on your Spot.

There’s another thing you can with the Spot called ‘Drop In’. This is basically video calling, but it works only with other Spots or Echo Shows. However, unlike Skype or other video calling services, you can set your Spot to allow video calls from your household or specific contacts so there’s no need to answer a call.

Instead, when someone uses Drop In, they’ll appear on the screen and they can see the feed from your Spot’s camera. This has many uses, from keeping an eye on an elderly relative to a video intercom to a remote part of the house or an outbuilding. It’s probably a little overkill to use simply to call the kids down for dinner, and may simply be a more convenient way to call family or friends that you already video call regularly. 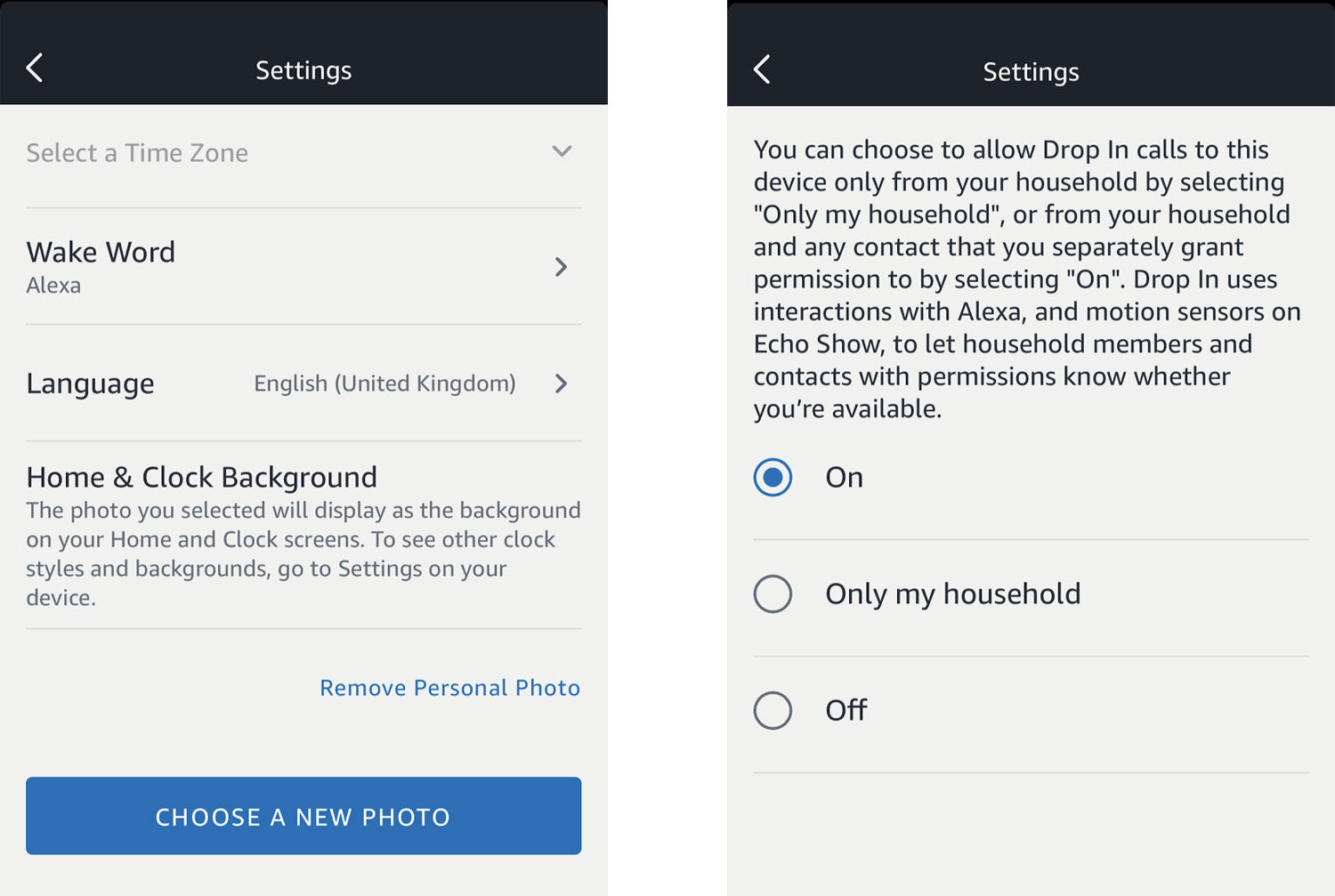 To give you a chance to avoid the camera, a Drop In call begins with a white screen which slowly transitions to the image, and your Spot will also make a noise to give you a bit of warning. And if you’re calling someone else who doesn’t have a Show or Spot then the conversation will be audio-only.

As well as Drop In, the Echo Spot’s screen can show short video clips from BBC News as part of your Flash Briefing. It will also display lyrics when you listen to certain songs from Amazon Music and highlight them as they’re sung, so you could use it as a mini karaoke machine. Kids loved this particular feature in our testing.

In other respects, Alexa has the same capabilities on the Spot as with any other Echo. You can get a better idea of these in our How to use Alexa guide.

Although the Spot’s screen is a touchscreen, you won’t find yourself using it that much. It’s necessary for initial setup to select your language, Wi-Fi network and for entering your Amazon account details. The small on-screen keys make this rather fiddly but at least you have to do it only once.

After setup, you can use the touchscreen to scroll through the information screens and settings menu, but the idea is that you use Alexa with your voice for most things. 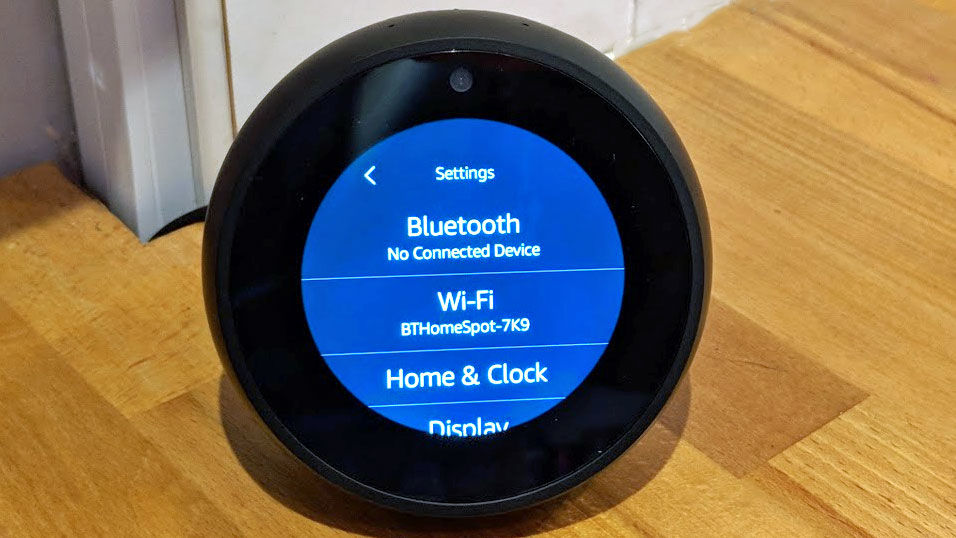 The Spot’s sound quality isn’t as good as the Echo Show, but that’s to be expected from a much smaller device. The speaker fires out of the bottom underneath the screen and reflects off whatever you’ve sat the Spot on so the material will have an effect.

Audio quality is about the same as the Echo Dot so the Spot is great for Alexa’s voice, news reports, radio and podcasts. It isn’t as great for music as it lacks bass and outright volume, but Amazon gives you two ways to connect a better speaker: Bluetooth and aux out.

And like all other Echos, you can use the Spot as a Bluetooth speaker itself to stream music from your phone, which you can then control using Alexa.

Since Alexa has been available on the Echo Show and some Amazon Fire tablets for a while, developers have had time to add a visual element to their ‘skills’. However, although some have been optimised for the Spot’s screen, others could look neater.

National Rail’s skill, for example, doesn’t appear to have been optimised, with graphics in seemingly the wrong places. 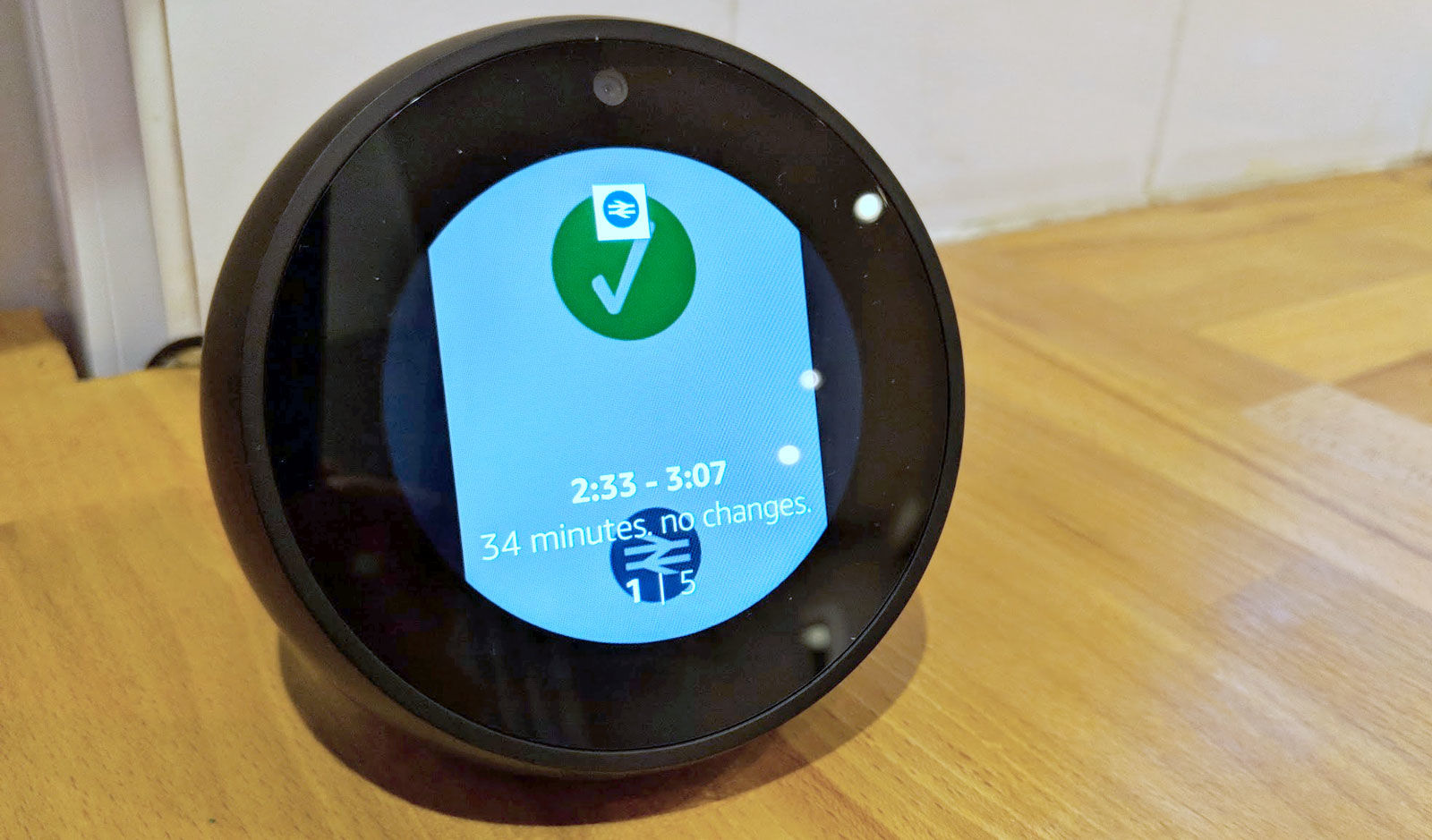 It’s also a shame that some security cameras which work in the US aren’t yet supported in the UK by Alexa. Being able to check a camera from the Spot is handy, so it’s well worth checking if yours is supported. Ultimately, there’s better support for smart home kit in the US at the moment.

In any case, if you think you’ll use the Spot’s extra features and prefer the idea of Alexa with a display, the Spot is a decent buy.