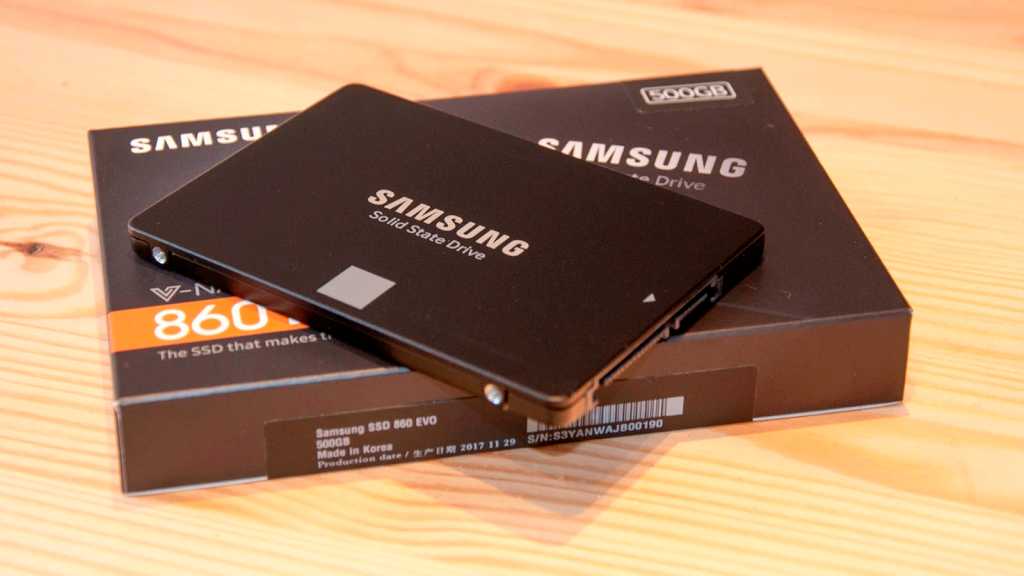 If you’ve got an NVMe PCI M.2 port on your system you’ll probably want Samsung’s 970 Evo Plus in that form factor, but for everyone else the SATA model is an excellent option. It’s not substantially quicker than the model it replaces, but the extended lifespan is certainly worth the modest investment. If every penny counts, the Crucial MX500 is cheaper.

At close to three times the speed of spinning rust the SATA SSD also uses less power, is lighter, silent, and connects using a port that all desktop systems come with as standard. Samsung makes a wide range of these devices, with the Evo series sitting in the middle ground of performance and capacity at an affordable price point. Here we review the new 860 Evo.

Samsuns currently makes 960, 850 and 750 Evo models, although the 960 is exclusively an NVMe PCIE M.2 design and not available in the 2.5in SATA form factor.

That makes the new 860 Evo series design it sent us the flagship SATA SSD, as it offers more capacity and greater lifespan than even the current 850 Pro series devices.

Samsung have told us that it’ll also be releasing mSATA and M.2 SATA versions of the 850 Evo, but not an NVMe PCIE M.2 design.

Those that want raw unadulterated performance need NVMe PCIE connected SSDs, but as a drop-in replacement for a hard drive or older SSD, the Samsung 860 Evo has plenty of enhancements to justify buying one.

In the US an 850 Evo 500GB costs about $150, and the new model is pitched at $20 more, almost the same ratio as the UK difference. Within a short timescale expect the 860 Evo to come down in price modestly, and what 850 Evo’s are left in the channel might well be discounted, too.

It’s worth noting that the 4TB model is cheaper than the 4TB 850 Evo, and therefore if you want an SSD that big then it might be worth waiting for the 860 Evo to be fully released.

At this time none of the major SSD brands makes a 4TB SSD that’s SATA connected, so unless you have a system that can accept and RAID dual 2TB drives then options are limited.

From the outside all 2.5in SATA SSDs look practically identical with the exception of colour and branding details. The Samsung 860 Evo does not break that convention; it’s a small black metal box with an edge SATA connector at one end.

The scale and appearance of the device is designed to emulate that of a 2.5in SATA conventional drive, although the electronics inside could probably be delivered in a much smaller enclosure.

Samsung tell us that mounted in there is a 64-cell layer V-NAND and the all new MJX controller, designed to enhance speed, reliability, compatibility and available capacities.

The design also supports AES 256-bit full disk encryption and can handle a non-operating shock of 1500Gs. Although, that last aspect is only useful if you’re not holding the SSD when it experiences that G force, because humans can’t normally withstand those extreme levels of abuse.

In the packaging is just a multi-language notes that point you to a web location where you can download Samsung’s Magician software that can be used to clone your drive and configure DRAM caching “RAPID Mode”, among other useful features. That’s all you get, because it appears that even Samsung has tired with including the plastic thickness spacers that SSDs once came with.

So, is the Samsung 860 Evo SATA a game changer or the retirement parade for another milestone in PC technology? 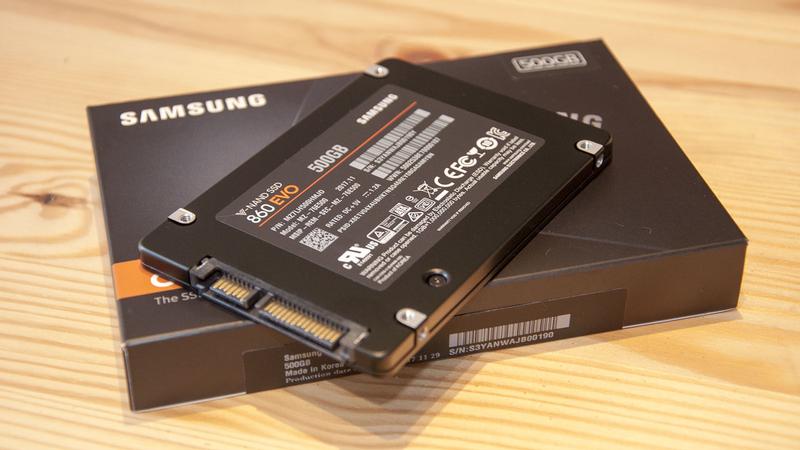 Before we talk about Benchmarks, we need to discuss the blind alley that the SATA SSD performance headed into a few years back.

Because the speed that this drive achieves is capped by the way that it connects to the PC, using SATA III technology, and not the quality or organisation of Samsung’s V-NAND flash memory placed in it.

Whatever speed the memory on the SSD can do, the absolute limit of the bandwidth available to SATA III is effectively about 550MB/s. If want to go quicker than that then you need an alternative means to connect, like that used by PCIe connected NVMe M.2 SSDs.

Therefore benchmarking the throughput of the Samsung 860 Evo is a marginally pointless exercise, as we’d be testing SATA III performance and not that of the 860 Evo. Samsung quotes 550MB/s reads and 520MB/s writes, and that’s where the SATA III express train hits the virtual buffers, so to speak.

The obvious question is therefore why you would want the 860 Evo over a previous design, like the 850 Evo, that could also nearly achieve the full experience of SATA III?

Well, there are a number of significant differences between this and its predecessor that are to do with the new Samsung MJX controller, the amount of cache memory and how these and other modifications have significantly impacted on the MTBF (mean time before failure).

If you run a battery powered system that reduced consumption will keep you going longer without a recharge, especially if you’re swapping out a conventional hard drive for the 860 Evo.

But the big news here isn’t power or speed, ironically. It’s the enhanced lifespan of this new generation.

Our typical weapons of choice for benchmarking SSDs are CrystalDiskMark and AS SSD benchmark, both of which provide accurate, reliable synthetic benchmark data.

In these tests we didn’t activate RAPID Mode, as how well this works is entirely dependent on the speed and amount of RAM on the PC and would skew the results against those drives that don’t use the same utility. If you don’t wish to plough through all the Bench results, we’re happy to tell you now that the 860 Evo is a fine replacement for its 850 Evo predecessor, and about one of the best SATA drives you can get today.

Compared with any conventional hard drive the 860 Evo just barrels along, and even compared with other SATA SSDs it isn’t a slouch. Bettered only by the Integral P Series 4 on reads, the 860 Evo is very close to the maximum practical speed for any drive connected using SATA III 6G/s technology. Write speed is also the best we’ve seen on SATA, and is only trumped by those drives that use PCIe connections.

Again, the 860 Evo is up with the best performance devices bettering all but the PCIe drives on reads and only the Kingston KC400 on writes. The only weakness of this design is the 4KiB Random Reads, where it presents the same sort of mediocre results that marred the 850 Evo. In all other respects this drive is an excellent performer, and a worthy replacement.

Wishing not to put all our testing eggs in just the CrystalDiskMark basket, AS SSD provides a good opportunity to support (or contradict) our other benchmarks.

Sequential reading was second only to the Toshiba Q300 in the SATA competitors, although it was marginally behind a few drives, including the drive it replaces in the write test. Conversely, it was slightly slower at 4K reads that the Evo 850, but trounced it and everything else in the 4K writes. 4K-64 reading and writing were both top level.

The Copy part of the AS SSD application simulates moving a range of file sizes defined as ISO, Program and Game. ISO was quicker than another other SATA SSD, as was Game. When we reviewed the 850 Evo this test provide challenging for that drive, but not the 860 Evo.

Best score for a SATA drive goes to…the 860 Evo! OK, it’s not that much better than the 850 Evo, but it crushes some other brands dramatically.

This test doesn’t actually provide comparison numbers, it’s more about spikes on the graph and how these represent compression bottlenecks. The 860 Evo is devoid of these, and presented a very consistent performance across the spectrum of this benchmark.

On the 850 Evo the designs below 500GB had a predicted failure after just 75TB TBW (Total Bytes Written) and the larger designs offered 150TB TBW. While 150 TB is plenty of writes, users are understandably nervous about how long drives last and how they wear, knowing that they are by definition finite.

Each cell in an SSD can only be written to so many times before it refuses to accept new modifications, and because of this the makers have an elaborate wear-levelling logic that tries to evenly distribute write operations.

The 860 Evo addresses that issue by offering 150TB TBW on the smallest 250GB drives, and then doubling that number at each subsequent size. At 1TB the TBW is an impressive 600TB, and the 4TB mechanism has an incredible 2,400TB or 2.4 Petabytes TBW. Yes, we’ve got to the P-word. So long terabyte, hello petabyte!

To put that in perspective; if you wrote the entire contents of a 50GB Blu-ray to the 4TB 860 Evo every single day it would take 131 years to hit the predicted failure point of the 4TB unit. This isn’t a claim we can practically test given deadlines, but it would strongly suggest that even with the smaller mechanisms the Samsung 860 Evo is highly unlikely to fail within the typical lifespan of a modern computer.

The most popular size is likely to be the 860 Evo 500GB, and with that you get 300TB TBW, or the equivalent of writing a 50GB Blu-ray each day for roughly 16 years, and that is plenty unless you’re editing 4K video for a living. Those that have that sort of write level should probably go for the larger models where even their excessive use seems well within the longevity of their new design.