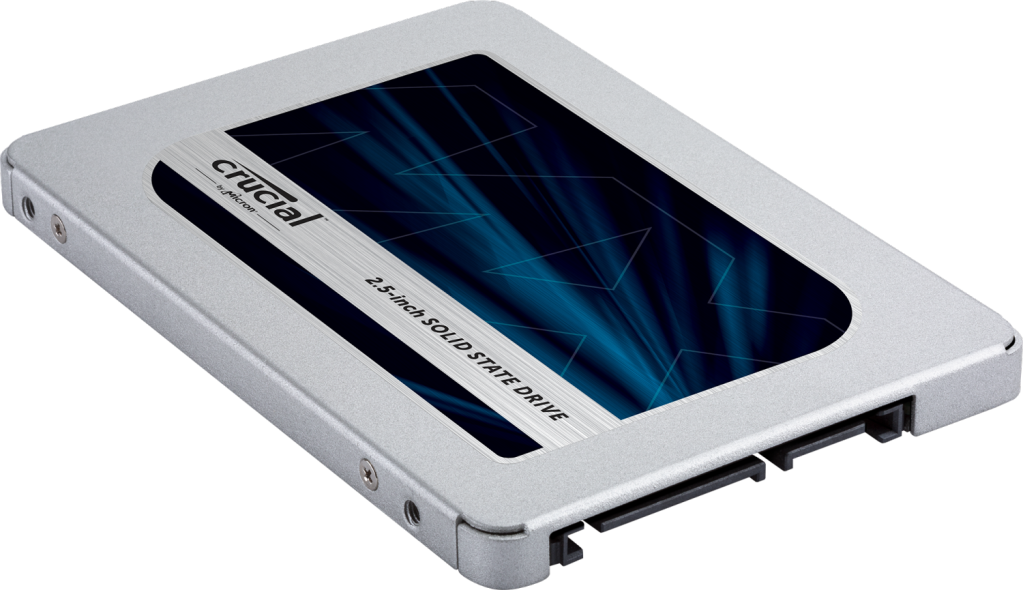 Unless you’re going to be using this drive for editing 4K video every day or need a 4TB device, the MX500 provides an almost perfect combination of performance and price. If you can afford the bigger capacities, you get a bonus not only in cost-per-GB, but they also have a much longer lifespan.

With the majority of PCs and laptops having SATA ports, companies that make SSD drives are determined to support this technology even if superior interface options are available.

The Crucial MX500 is aimed squarely at those people who have traditional spinning hard drives or older-generation SSDs, and fancy something better, bigger or just a new drive in their system for more capacity.

With new models from Samsung and others, what makes the MX500 the SSD you might want? Let’s find out.

Looking at these figures in more detail, the cost per GB goes down as the capacities increases, making the 2TB drive the most cost-effective choice, for those that can afford one that is.

The benefit of the 2TB is that it also has the greatest TBW (Total Bytes Written) endurance, making it even more desirable.

Compared with the competition, the MX500 is cheaper than Samsung’s 850 Evo (and the coming 860 Evo), the SanDisk Ultra II, the Kingston SSDNow UV400 and OCZ Toshiba Trion 150 Series.

To get a 500GB drive at this price point encompasses the Kingston A400, Sandisk SSD Plus, Panther AS300 or Western Digital’s Blue SSD. And of these drives, only the WD Blue offers anywhere near the performance of the MX500.

See our list of the best SSDs to buy for more alternatives.

Note that you can get this SSD in two different form factors – see Features & Design below for more.

We’re not sure what happened to the MX400, because the prior model in this series was the MX300, a decent design that broke new ground when it first appeared back in August 2016.

For those who like SSD history, the Crucial M500 was the flagship product in 2013, so the MX500 isn’t really a follow up to that device.

Since then the inexpensive BX300 has appeared, succeeding the BX200, and now the MX500 replaces both that and the M500 in a single solution. With Crucial not offering a ‘Pro’ series equivalent tier, the MX500 stands entirely alone as the flagship SATA SSD. 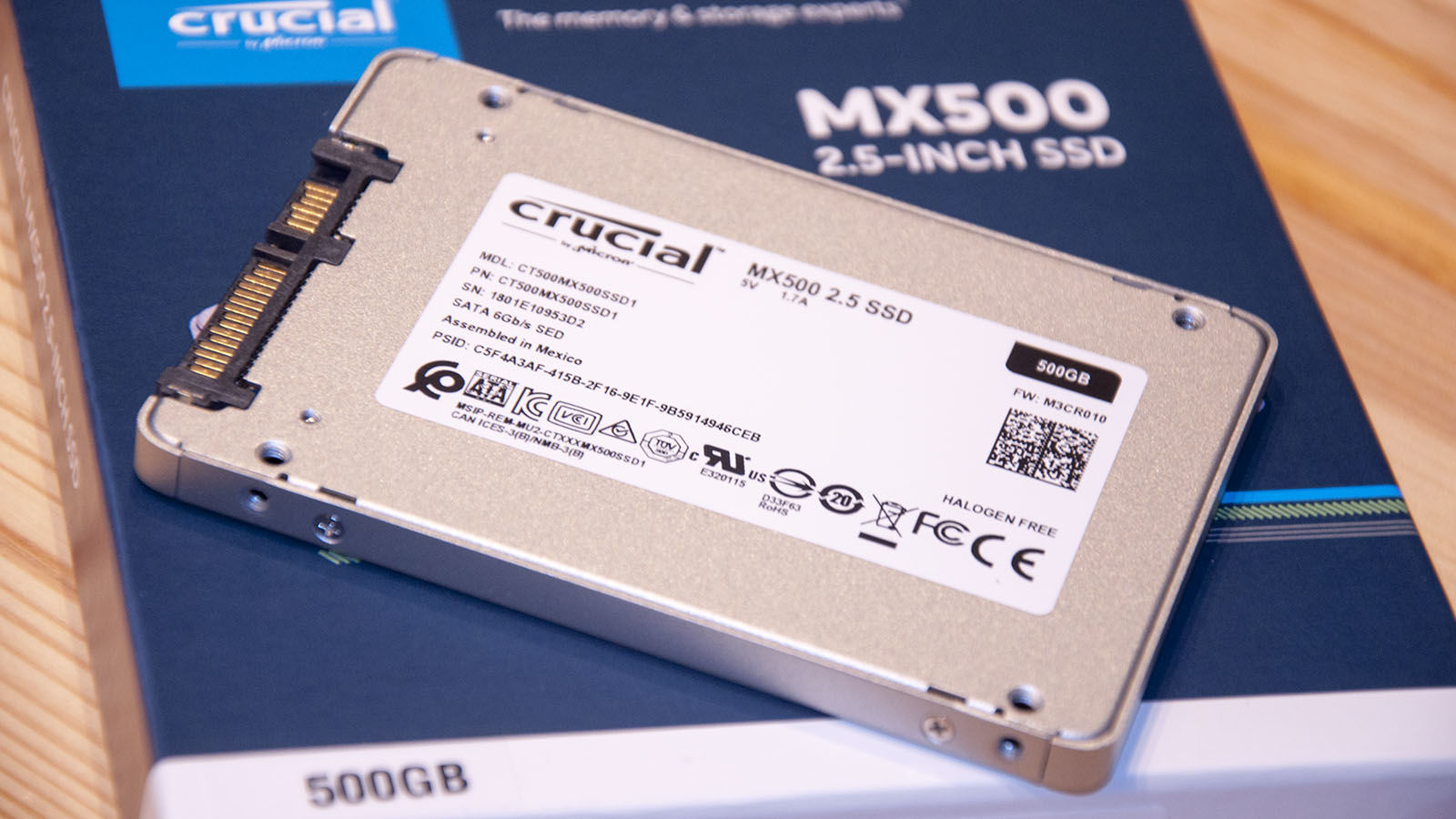 Before anyone with an M.2 slot on their motherboard gets overly excited, the M.2 version is a SATA drive and not PCIe NVMe, and therefore has identical performance to its hard-drive-sized siblings.

Another comparison worth noting is that the era of getting different performance levels at each capacity is now truly behind us with the MX500. Because irrespective of capacity these drives all have identical quoted read and write performance, and this even extends to the IOPs.

Where they differ, in other than capacity and price, is that the larger drives have greater TBW (Total Bytes Written) values, giving them a theoretically longer life expectancy.

There isn’t anything unusual about this, because logically if you have twice as much space then and each byte can be written X times before it fails then you can write twice as much data before hitting that limit.

On the MX500 the scaling of TBW values is a little uneven, but the largest 2TB drive has 700TB TBW, the equivalent of writing a 50GB Blu-ray disc to the devices every day for 38 years straight.

The 500GB drive we tested would have lasted nearly a decade doing the same exercise, should lifespan be a concern for you.

Another interesting feature added to this design is Integrated Power Loss Immunity, a mechanism that protects the drive from incomplete writes should the power be unexpectedly cut in mid-operation.

All drives can become corrupted during power failures, especially if the part of the process still to complete is the updating the master file tables at the time, so this type of protection is very useful. It might not protect you from partial file write, but the drive should at least have a readable structure after the power comes back. 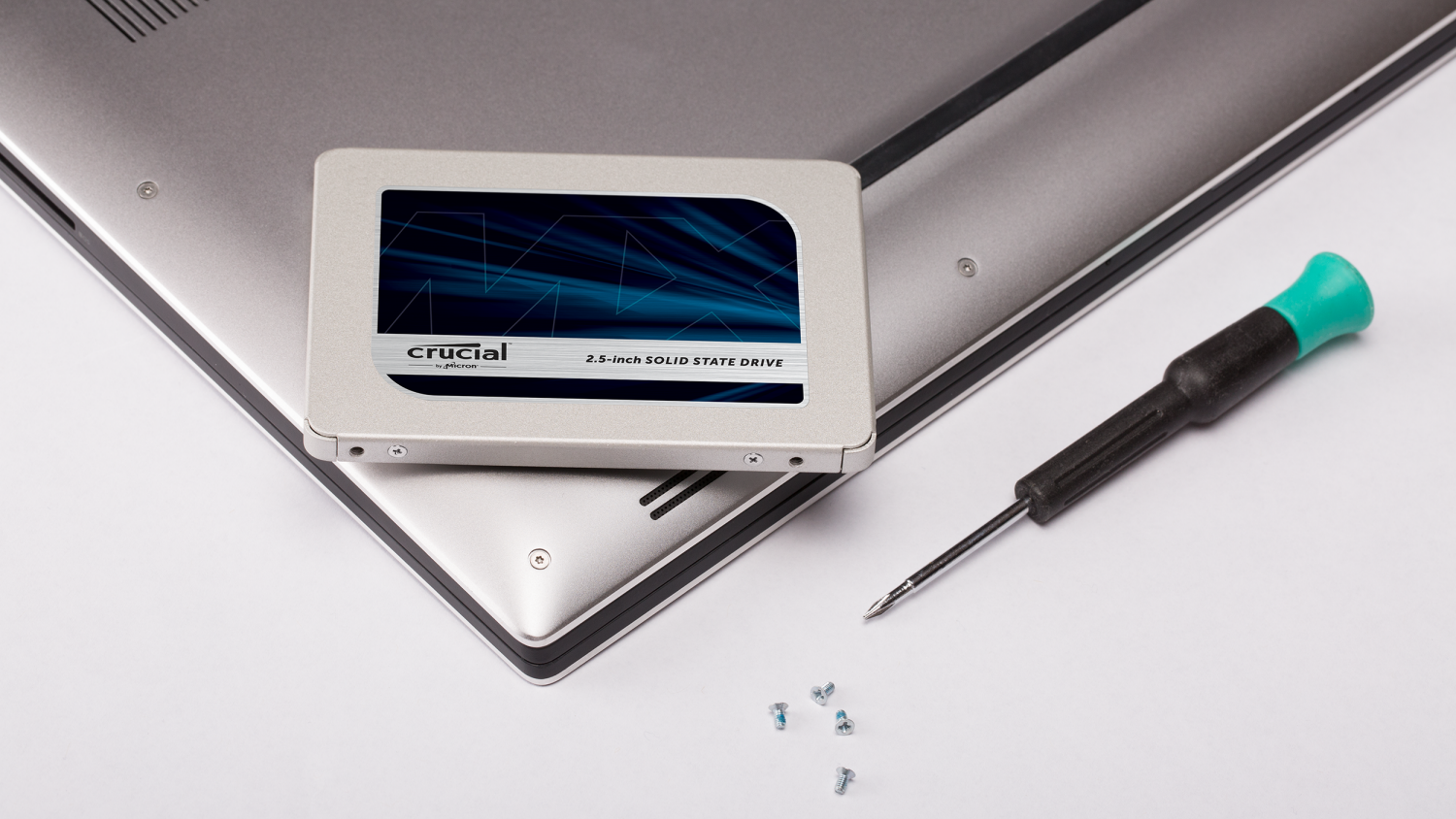 In the box along with the drive Crucial provides a plastic spacer, used in those laptops designed for older (and thicker) 2.5in hard drives, and instructions as to where you can download a free version of Acronis True Image HD software, for easy data migration from your existing drive.

Having ticked the boxes for price and functionality leaves the MX500 only one hurdle left, performance.

This isn’t the very quickest SATA SSD we’ve ever tested, but it’s hardly slow either. The profile of this design is one that is strong at reading, acceptable at writing and better at both than any previous Crucial SSD design.

Our typical weapons of choice for benchmarking SSDs are CrystalDiskMark and AS SSD benchmark, both of which provide accurate, reliable synthetic benchmark data. 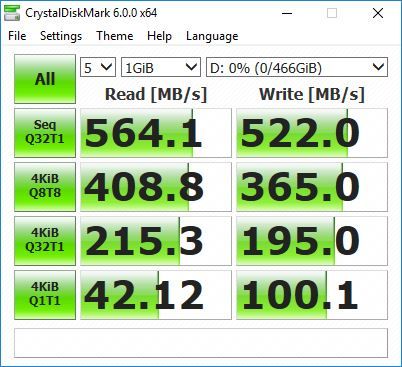 Forgetting all the SSDs that use PCIe connections, the Crucial MX500 is one of the fastest SATA drives we’ve ever tested for reading on this test. Marginally slower than the Integral P Series 4, it kicks the older BX200 series to the kerb.

Sequential writing is also good, but not best in class. It’s on par with the Samsung 850 Evo, and a bit slower than the Kingston SSDNow KC400. Again 4k reads are excellent, where 4K writes are good but no rosette. 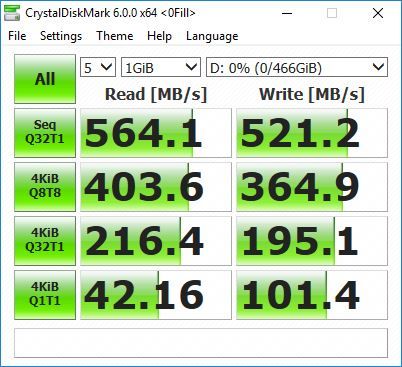 Like the Random results, the MX500 is a strong contender across many tests, but manages all its exceptional results on the reading side of the coin.

The Random Sequential Q32T1 score is excellent where conversely the write is good, but not exceptional. That said, the write speed on 4KiB is great.

If there is a weakness here, it is in the Random Write 4KiB Q32T1 test, where the numbers are much lower than we’d of expected. 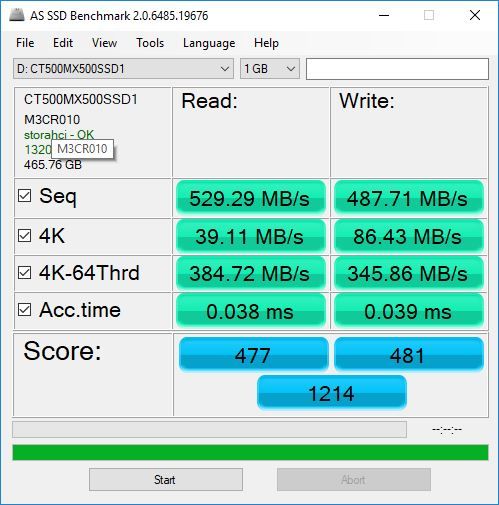 Wishing not to put all our testing eggs in just the CrystalDiskMark basket, AS SSD provides a good opportunity to support (or contradict) our other benchmarks.

The Sequential Read performance of the MX500 mirrors the CrystalDiskMark results, being exceptionally good. But, as per the previous tests write performance isn’t as strong compared with the likes of the Samsung 850 and 750 Evo, Kingston KC400 and the Toshiba Q300.

This trend continues through most of the elements in this test, where read performance is wonderful and write speed is decent, but not remarkable.

The only exception to this is the 4k-64 Write test, where the MX500 is better than almost anything else we’ve previously tested. 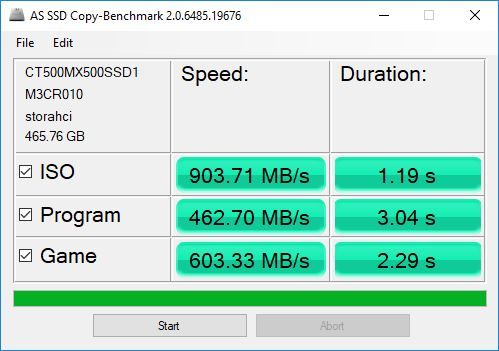 The Copy part of the AS SSD application simulates moving a range of file sizes defined as ISO, Program and Game. ISO was quicker than another other SATA SSD, as was Game.

The oddity of this test is that the MX500 delivers higher scores on the ISO part of this test than it should be capable given the SATA interface.

The numbers for Program speed are more believable if high, and the Game test is about twice what it should be. It would be prudent to assume that the way the MX500 organises its cache has somehow flummoxed this benchmark. 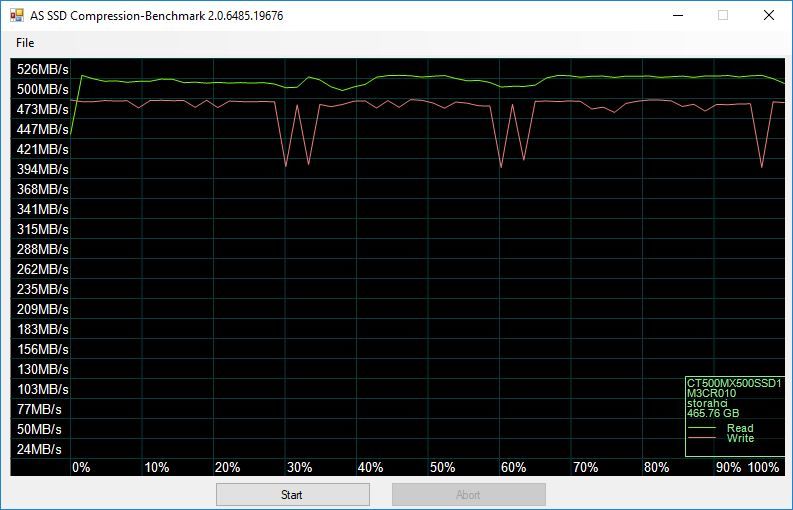 This test doesn’t provide comparison numbers. It’s more about spikes on the graph and how these represent processing logjams for variably compressed data. What we’re looking for is reasonably parallel performance tracks for reading and writing, and a lack of random spikes.

The gap between the lines could be narrower, but it’s hardly wide. And, the spikes appear in roughly the same place on subsequent tests.

We’ve seen straighter lines and fewer spikes, but this isn’t a bad result by any standard.

Should I buy the Crucial MX500?

With SATA III 6GB/s connection being a limitation than SATA connected drives can’t easily circumvent, companies that make them have been forced to get creative to differentiate their products in the market place.

Where some SSD makers have taken to giving their new products a very high TBW, Crucial has taken a slightly different tack. That’s not to say that the TBW on the MX500 is poor, it isn’t.

The performance is also generally good, within the limitations imposed by the SATA interface.

Those that want the ultimate speed will be sourcing PCIe M.2 SSDs that the SATA MX500 just can’t compete With price being the key strength of this design makes it seem unlikely that Crucial will revamp the BX series drives anytime soon.