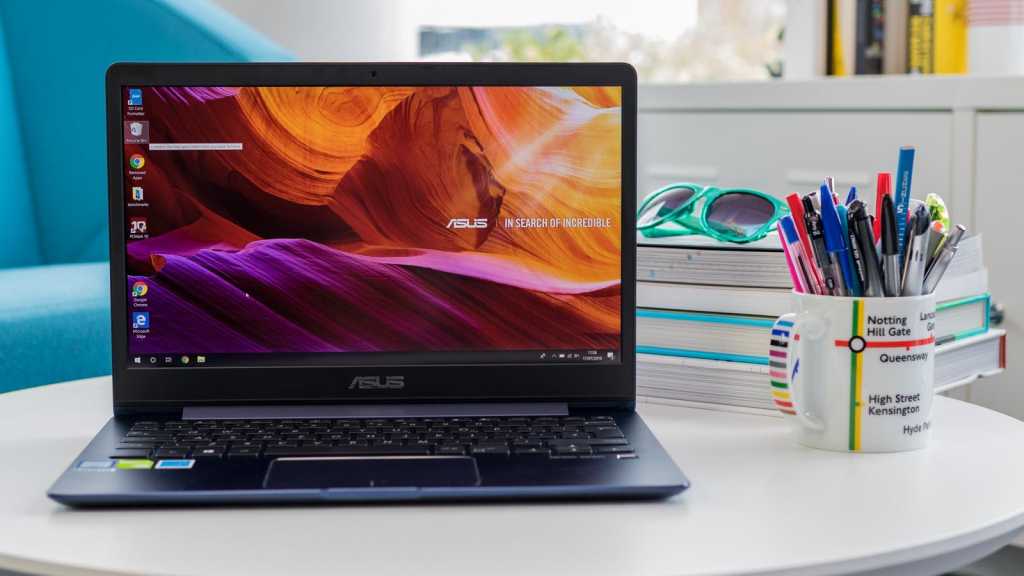 The ZenBook 13 might not look quite as slick as its closest rivals, but it’s astonishing that Asus has managed to cram high specs and a decent selection of ports into a laptop this light – and at a starting price below £1,000/$1,000. If you want a powerful ultrabook with great connectivity and don’t mind a slightly flimsy plastic finish, the ZenBook 13 is an easy recommendation.

Smaller is clearly better this year, as seemingly every computer manufacturer under the sun used CES 2018 as an excuse to unveil a new ultrabook. Dell revamped the XPS 13, Acer slimmed down the Swift 7 even more, and Asus revealed the new ZenBook 13.

Where the Zenbook hopes to stand out against the competition is with an ultrabook that’s ultralight without being ultrathin – which may sound like a bad thing, until you remember that means massively improved connectivity, including USB-A ports.

So has Asus managed to offer portability without compromise, or has the ZenBook 13 lost its focus? Let’s find out.

When Asus first announced the revamped ZenBook 13, we predicted prices starting from £1,200/$1,200 – which is why we’re pleasantly surprised that in fact it costs a chunk less than that.

The models are a little different in the UK and US, so we’ll tackle them separately. In the UK, there are two versions of the laptop available, both exclusive to John Lewis. The base model costs £999.95, and comes with an i5 processor, 8GB RAM and 256GB of storage – that’s what we’ve reviewed. Jump up to £1,199.95 and you can upgrade to an i7 processor with 512GB storage instead.

In the US there’s only one model available, which costs $999 from Asus but is also available from Best Buy or B&H Photo Video. That comes with an i5 processor, 8GB RAM, and 256GB of storage, and one notable difference from the UK model: the display is a touchscreen.

The design of the Zenbook 13 is where Asus has arguably made its most interesting choice. The company is making a big fuss about it being ultralight – at just 1.12kg, it weighs a little more than the MacBook or Asus’s own ZenBook 3, but only just, and that’s despite boasting a full 13.3in screen, larger than either of those models.

To put the weight of this laptop in perspective, this is 100g lighter than Dell’s new XPS 13, despite similar specs. That’s despite the fact that at 13.9mm this is actually thicker than Dell’s latest, which boasts a strikingly slim design that’s just 11.6mm thick. The ZenBook 13 is still an impressively thin laptop by any measure, but it’s not quite leading the ultrathin pack.

Those extra few millimetres are put to good use though, allowing Asus to offer more ports than most of its ultrabook rivals, including the holy grail: a pair of USB-A 3.1 ports. They’ll be a boon to anyone who wants an ultralight laptop without the need to carry round a separate USB-C dock to make up for missing ports – thus negating most of the benefits of the ultralight design.

The lighter weight is made possible in part by the decision to use plastic for the laptop’s lid – though the main chassis is metal – with an ultra-glossy finish that attracts fingerprints like nobody’s business. Between the plastic and the smudges it does detract slightly from the otherwise premium aesthetic, but if Asus is going to save costs anywhere this is probably the best option, leaving the laptop’s actual performance intact.

Officially this is available in a choice of two finishes, Royal Blue and Slate Grey, but so far we’ve only seen the blue model on sale in the US and UK.

Neither the keyboard nor trackpad excel in the ZenBook 13, but equally neither disappoints. The keyboard – which is backlit, with three different brightness settings – has a surprisingly high resistance and deep travel (1.4mm), along with comfortable key spacing – including decent-sized arrow keys and a full row of function keys.

It’s not quite our favourite laptop keyboard out there – that’s still Dell’s XPS 13 – but it’s comfortable to type on, and fundamentally pretty unobjectionable.

The trackpad is similarly tough to complain about. It’s a great size, with a glossy  metal edge that’s one of the laptop’s most attractive little features. It’s smooth and responsive, and in one nice touch you can use any part of the pad to left-click except the designated right-click area – though in practice, long-formed habit probably means you won’t.

The display is arguably a bigger letdown. Unlike some rival ultrabooks the 13.3in IPS display caps out at Full HD, with no 4K option, and in the UK there isn’t even the option of a touchscreen model – despite the fact that the US model is touch-enabled (which we haven’t been able to test, since we’re UK-based).

The best part of the screen is the anti-glare finish, which does a great job of minimising reflections even under the bright glare of fluorescent office lights, and helps the display offered an impressively wide viewing angle – though that’s not the biggest priority for a laptop.

The downside is that the display isn’t especially bright itself, maxing out at 302 cd/m2, well behind rivals like the Surface Book 2 or XPS 13. Colour reproduction is also slightly muted – no doubt made worse by the limited brightness – though contrast is better. The display definitely isn’t awful – it’s almost certainly good enough for the average user – but it’s one of the areas where the ZenBook 13 lags behind its more expensive alternatives.

Despite the lightweight design, this is a laptop with some serious heft under the hood. It comes with an 8th-gen Intel Core processor, with a choice between an i58250U or an i7 8550U (though the US seems to be limited to the i5). It comes with 8GB RAM, 256/512GB of SSD storage and – most impressively for the price – a discrete Nvidia GeForce MX150 graphics card.

That pays off when it comes to performance and benchmarking, with the ZenBook 13 posting some seriously impressive results for its size and price. A score of 3408 on PCMark 10 puts our i5 model in spitting distance of the XPS 13 and Surface Book 2 – both tested with i7 chips – while the 8201 score in 3DMark actually outperformed the XPS 13, even though Dell’s device is more expensive.

Those high scores are perhaps in part down to great heat management, minimising the need for thermal throttling. The laptop doesn’t get too hot even under heavy load, and best of all manages to stay cool without the fans cranking up to an obnoxious volume.

The benchmarks mostly bore out in day-to-day usage, and the ZenBook is snappy and responsive through most tasks. It did hang up and freeze on us a couple of times, with the cursor locking for ten seconds or so before returning to normal, which is the only thing that gives us pause when it comes to performance.

One of the best aspects of the ZenBook 13’s build is the fact that Asus has left in space for a serious array of ports – the sort you just can’t get any more on rival ultrabooks.

Yes, you get the now ubiquitous USB-C port, but alongside that there are two USB-A 3.1 ports, HDMI, a headphone jack, and a microSD card reader. The only real downside here is that it uses a round DC power lead rather than USB-C, so you can’t use the same charger for this as you might use for your phone or tablet.

You also get a blazingly fast fingerprint scanner, and built-in Harman Kardon speakers that deliver pretty respectable audio by laptop standards. Oh, and the webcam sits above the screen – always a more flattering angle.

Battery life is also impressive – Asus claims it should offer up to 15 hours of usage, and in our testing it lasted just under 12 hours of constant video at 50 percent brightness – more than enough to last a long-haul flight or get you through a day of typing if you accidentally leave the charger at home.