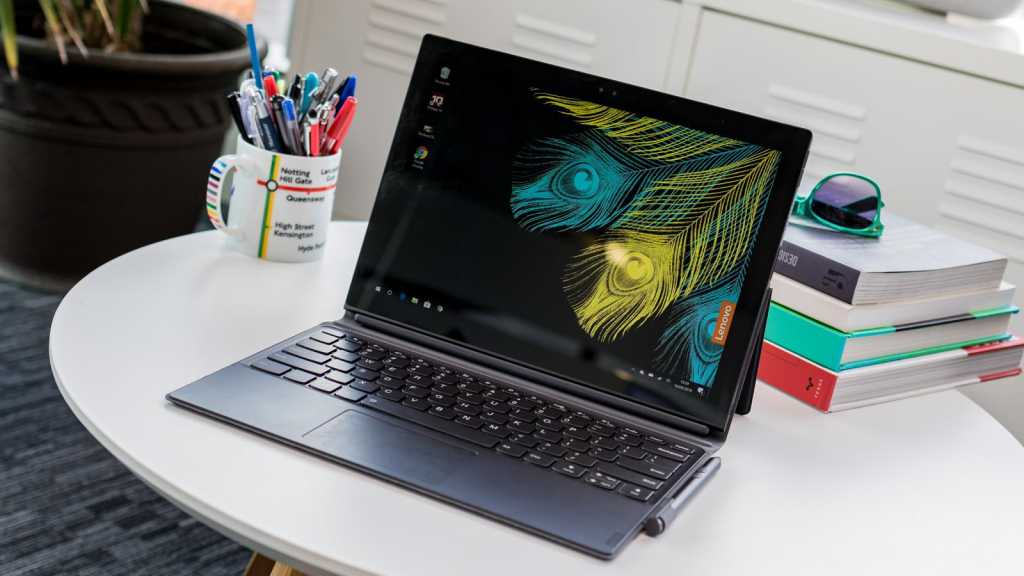 The Miix 630 is basically budget performance in a premium body, with 4G and a big battery to help sweeten the deal. It could be a great option for users who want a 2-in-1 laptop that’s easy to use on the go, without worrying about battery life or Wi-Fi connections, but only if you’re happy to stick to word processing and web browsing. If you need anything much more intensive than that you’re probably better off looking elsewhere – which would be easier to swallow from a cheaper device, but for something nearing a grand it’s a harder sell.

The Lenovo Miix 630 2-in-1 is one of the first three Windows 10 devices powered by Qualcomm’s Snapdragon 835 processor – rather than an Intel chip. The HP Envy x2 and Asus NovaGo released earlier this year, but Lenovo has waited a little longer to release the Miix 630.

The upshot of using the Qualcomm chip is that the Miix 630 enjoys always-on LTE connectivity along with a mammoth battery life of 20 hours – though can the Snapdragon power a Windows 10 laptop as smoothly as it does a flagship phone?

The Miix 630 is on sale now in the US, where it costs $899.99, and you can buy it direct from Lenovo or Microsoft, or for a little less from Amazon.

That’s a small chunk less than the £999/$999 HP Envy x2, but more than the £599/$599 Asus NovaGo, the only other two Snapdragon 835 devices running Windows 10. It’s worth bearing in mind that Snapdragon 850 devices on the way though – including Lenovo’s own Yoga C630 – promising better performance for a similar price if you can wait until early 2019.

It’s not out in the UK right now, but hopefully will be soon – and if not you can always import it from one of those US stores, though you should naturally expect to pay a little extra for shipping and customs.

In terms of design, the Miix 630 is a fairly standard 2-in-1 with a detachable keyboard. It’s attractive enough in an understated way, but it’s clearly not a design-driven device.

The core of the device is essentially a 12in tablet bordered by some fairly thick bezels. Most of the time though you’ll probably use it with the included keyboard cover and kickstand, which does a pretty good job of replicating the laptop experience.

The body of the main tablet is all metal, which leaves it feeling substantial and premium without weighing it down too much – it’s still just 7.3mm thick and 770g without the keyboard – slightly chunkier than HP’s Envy x2, but still comfortably portable. Adding the keyboard takes it up to 15.6mm and 1.33kg.

The rear is finished in a sort of slate grey with a lighter band of grey along one edge, with a single camera lens tucked into one corner. Then there’s just a power button, and two volume buttons, keeping things pretty minimalist.

With a full-size backlit keyboard and touchpad, the keyboard cover is a respectable substitute for a proper laptop. It comes in a slightly plain dark grey, but the leatherette finish looks and feels great, and the internal body of the keyboard part is a sturdy plastic that adds to the ‘proper laptop’ feel.

The key feel is surprisingly impressive, without the mushiness you often find on detachable keyboards, but we did experience a frustrating number of dropped key presses when typing quickly – you probably won’t want to use this for extended writing sessions, though it’s fine for dashing out emails or notes. The trackpad is slightly small for our tastes but gets the job done for the most part.

There’s also a small strap on the right edge to attach the Lenovo Pen, a simple stylus that comes included with the device. Again, this won’t compete with serious artistic stylii, but for doodles or note taking it’ll more than hold up its end.

The display is a 1920 x 1280 touchscreen, which is crisp and fairly bright, with a maximum brightness of around 315cd/m2 – that’s about what you’d expect from a device at this price, but nothing to write home about.

Still, it’s bright enough that it can just about hold its own even if you want to use it outside in bright light, which is crucial for a device like this, which will be sold mostly on the basis of its portability and always-on internet.

The big selling point for the Miix 630 is that Snapdragon 835 chipset lurking inside, which promises a few big benefits over Intel’s equivalents – with a couple potential downsides too.

The improved battery life and LTE connectivity sound like big benefits, but there’s still the question of performance hanging over this and similar devices. The Snapdragon 835 is a powerful chip, capable of silky smooth performance on a flagship phone, but can it manage the same running Windows 10?

The Miix 630 runs Windows 10 S out of the box, but Lenovo is offering users a free upgrade to Windows 10 Pro within 180 days of activation, which offers more functionality, but at a slight hit to performance and battery life – and the risk of compatibility issues, as not every app outside of the Windows Store is guaranteed to run smoothly on the Qualcomm chip.

We don’t run into too many issues with apps, but found that some of our usual benchmarking software wouldn’t run on the Snapdragon, and it’s likely that other demanding programs – think games, or photo, audio, and video editing software – might either refuse to run, or run with a few extra bugs and issues.

For its part, Qualcomm says its working on improving compatibility issues, so you can probably expect this to improve over time at least.

Speaking of benchmarks, it’s no real surprise to see that the Miix 630 struggled here. A Geekbench multi-core score of 3077 is in line with the HP Envy x2, but to find an Intel device with similar performance you’ve got to go right down to the budget end of the market – worrying for a device that costs four times as much as those.

In real-world use, performance is perfectly smooth if you stick to web browsing, email, or streaming, and it even keeps up with light multi-tasking well, but don’t expect this to handle anything much trickier than that. With only 4GB of RAM and 128GB of storage this is clearly not a powerhouse, so it’s best approached with that in mind.

The flipside of that limited power is one of the big perks of the Snapdragon processor: this is an always-connected device, with Qualcomm’s X16 modem offering Gigabit LTE through a Nano-SIM slot.

Access to 4G internet on a laptop could be a huge boon for some users, freeing you from the need to track down Wi-Fi everywhere you go, but it naturally comes with the additional ongoing cost of a data plan, so bear that in mind. Still, access was smooth and fast, and Windows does a good job of switching between LTE and Wi-Fi as and when connections are available.

As for ports, you get one USB-C port, a headphone jack, and a MicroSD card slot – it’s built into the SIM tray though, so it’s more for expanding the internal storage than quickly transferring files. The single USB-C is a big limitation when it comes to using this as a laptop, as it means you can’t simultaneously charge the device and transfer data – and you’ll obviously need a dongle or USB-C hub to use HDMI, USB-A, ethernet, or anything else.

Finally, battery life, which is the other area that the Snapdragon excels, with Lenovo promising up to 20 hours use. In our continuous video playback test, the Miix didn’t quite manage that, dying after a very respectable 17 and a half hours.

Real-world usage is better than that, as non-stop video is among the more battery-intensive things you’re likely to use it for, and the Miix really is impressive in that respect. It’s the sort of device that lasts for so long that you just sort of forget about charging it, especially if you’re only grabbing it for the odd meeting rather than using it all day.

Still, you don’t have to jump to Qualcomm to get similar performance. Some of Microsoft’s Surface devices have lasted just as long, while Dell’s XPS 13 does almost as well while offering much more power, which slightly negates half of Qualcomm’s USP.