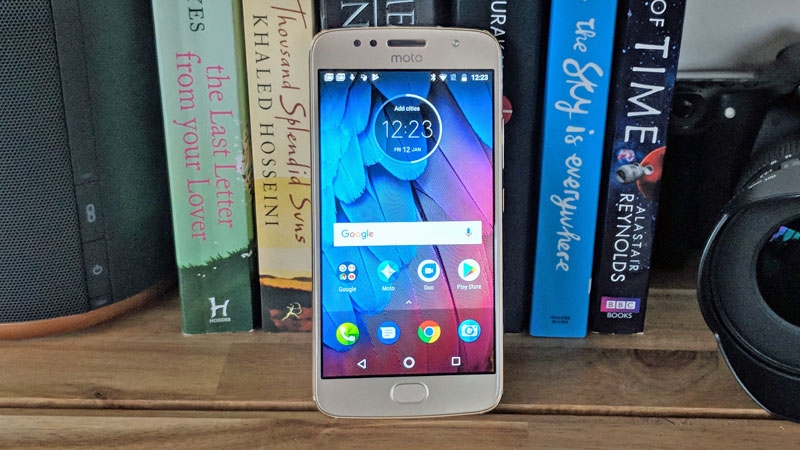 The G5s is a good-looking, well-built phone that suffers from below-average performance. Its cameras are good, though, and it has a decent screen. The main problem is that you can get a faster phone with better specs for the same money, so it’s hard to recommend it unless you find it significantly cheaper.

When the Moto G5 launched it became our favourite budget phone, but things weren’t perfect. It was no faster than the outgoing G4 and – if anything – battery life was marginally worse.

Motorola followed up with the G5s, which in 2018 faces stiff competition from plenty of other inexpensive phones – notably those from China.

That’s the single-SIM version with 3GB of RAM and 32GB of storage. It’s expandable via a microSD card up to 256GB.

There are dual-SIM versions of the G5s, but they’re not widely available in the UK and in any case, they use a hybrid tray which forces you to choose between using a microSD card or a second SIM.

Compared to the many ‘bezel-less’ phones around these days, the G5s looks dated with its large top and bottom bezels. However, with an all-aluminium chassis, it feels well built. And at 154g, it isn’t too heavy.

Even though Motorola has installed a slightly bigger screen, 5.2in up from 5in in the G5, the phone itself is barely any smaller than rivals with a 6in screen.

That said, it’s a decent 1080p screen which is nice and bright and has decent contrast and colours. As it’s larger than the G5’s screen, pixel density is a bit lower but at 423ppi everything still looks lovely and sharp. It’s covered in Gorilla Glass 3, unlike the G5 which had no Gorilla Glass at all.

You don’t get a whole lot of great specifications for your money, though. There’s no 802.11ac Wi-Fi, no USB-C port and – worst of all – the same old Snapdragon 430 processor which we criticised in the G5.

The ‘s’ does have upgrades beyond the bigger screen though. It has NFC, so you can use it with Android Pay, and there are better cameras both front and rear. You also get Bluetooth 4.2 with aptX support and in the box is a TurboPower fast charger, too.

The fingerprint scanner is on the front, as before, and doubles as a navigation button if you enable the option. It works quickly and reliably.

It’s worth saying, too, that although there’s no 802.11ac, you still get dual-band 802.11n, which means the G5s can connect to the faster 5GHz radio on a compatible wireless router.

And talking of radios, there’s an FM radio which is unusual to see in a UK phone. You can read our detailed Moto G5 vs G5s comparison, too.

The main problem with phone is that processor. Motorola calls it a ‘blazing-fast 1.4GHz octa-core’ but this isn’t remotely true. It’s an oxymoron: the latest chips run around 1GHz faster than this.

Clock speed isn’t the best indicator of performance, but our benchmarks (not that we needed them) confirmed that the G5s is just as sluggish as its predecessor.

Even with no additional apps installed it’s easy to notice the occasional hesitation when switching between apps and simply navigating around Android.

Put simply, performance is below the level we’d expect from a £200 phone and there are faster alternatives available for less money.

The same goes for 3D grunt: the G5s can handle casual games, but you’ll notice a reduction in graphics quality on more demanding games, which won’t run as smoothly as on more powerful phones.

In GFXBench it managed 14fps in the basic T-Rex test and only 7.5fps in the Manhattan test. The newest Car Chase test played like a photo slideshow.

Battery life is marginally better than the G5 thanks to the bigger-capacity 3000mAh cell, but you’ll still be charging the G5s each night so, practically, there’s no real difference.

The benefit is the TurboPower charging which will give the phone around five hours of use from a 15-minute charge.

This is where the real improvements show. The front camera unfortunately still has only a 5mp sensor, but the f/2.0 lens delivers sharper, slightly better selfies than before.

It’s at the back where there’s a noticeable jump in quality. It isn’t really because of the switch from 13- to 16Mp sensors: resolution is never a good indicator of quality. Regardless, the G5s is capable of taking much better photos than the G5.

In good light, pictures are sharp with lots of detail and great colours. We also like that there’s an auto HDR mode rather than having to select it manually, which is an inconvenience that means it rarely gets used.

On the G5s, automatic HDR is enabled by default and when invoked it does a decent job of improving high-contrast shots.

Things aren’t as rosy in low light where much noise creeps in and the camera just can’t resolve the level of detail you get from flagship phones.

The bad news for those who like to shoot video is that the CPU limits resolution and framerate to 1920×1080 and 30fps respectively.

It does benefit from software stabilisation, though, which does smooth out a lot of unwanted movement from shaky hands.

Since launch, Motorola has updated Android to 7.1.1, but there’s still no Oreo available even though the firm did promise to roll out Android 8.0 to the phone.

The good news is that – as ever – the Moto G5s runs a near-stock version of Android with actually useful additions from Motorola. You get the double-twist to launch the camera, karate chop for torch, plus the option to use gestures on the fingerprint scanner instead of the standard Android navigation buttons.

Again, the ability to flip the phone onto its screen to put it in ‘do not disturb’ mode is really handy.

Compared to other Moto phones, there’s a limited selection of Moto Display options. No double-tap to wake the phone, nor swipe your hand over the screen to see notifications. You can enable ‘fade in and out’ notifications when the screen is off and a blue-light reduction at night, but these are pretty standard on most Android phones.

Those who love their Android notification LED will be disappointed that, although there is one for indicating low battery and charging, it cannot be used as for notifications.