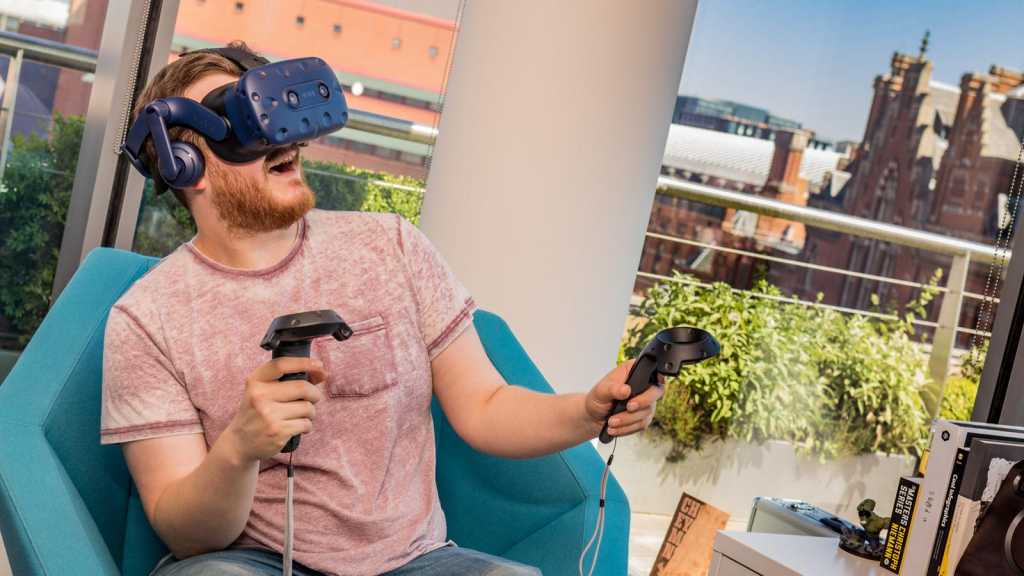 The HTC Vive Pro is, essentially, an iterative upgrade. It doesn’t radically transform the VR experience, but it does offer a series of solid, important improvements that make the product feel much more polished. The higher resolution display provides crisper visuals and makes text much easier to read, but when you consider the price of the headset and the fact that accessories aren’t included, not even the high resolution will be enough to tempt the majority of consumers.

Two years after the release of the HTC Vive, the second-generation HTC Vive Pro is now readily available to buy in the UK and the US. The new headset offers a range of design changes alongside a bump in resolution, making the Vive Pro one of the highest resolution VR headsets on the market at the moment. It certainly isn’t cheap though, at £799 just for the headset.

Is the HTC Vive Pro worth the money, or should you stick with the regular HTC Vive? We’ve spent some time with the high-end VR headset, and here’s our HTC Vive Pro review.

The HTC Vive Pro is now available to buy for £599/$599, following an early 2020 price drop from the original £799/$799 price tag. Those interested in picking up the headset can do so from the  Vive website, as it seems many UK and US retailers are yet to update pricing for the headset.

Is the high resolution and design overhaul worth the high price of the Vive Pro? Carry on reading to find out. 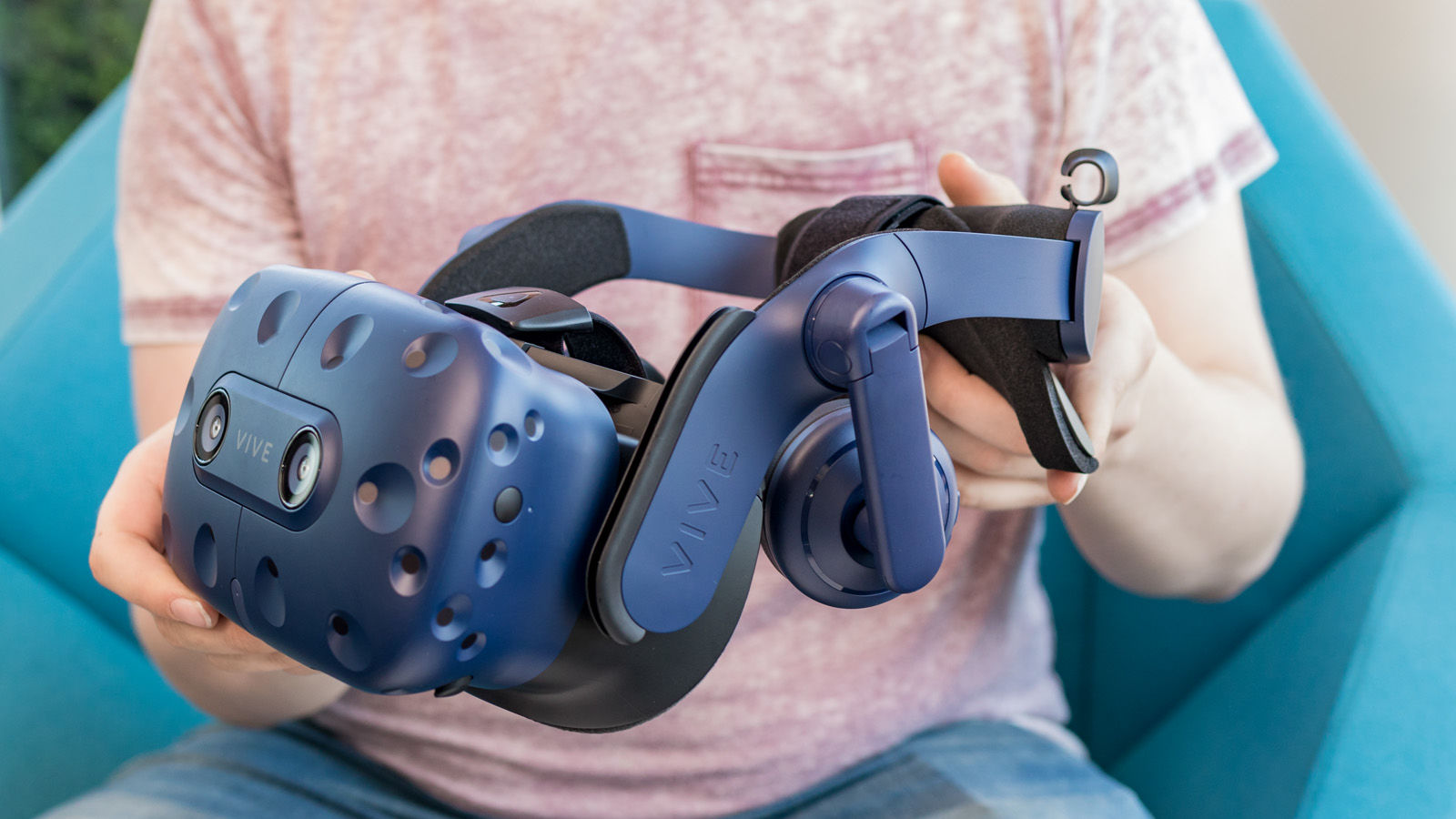 Apart from the change in resolution and a couple of other internal features, most of the evolution from Vive to Vive Pro is in the design department. The most noticeable change for many will be the colour of the headset – while the HTC Vive was black, the HTC Vive Pro is deep blue across most of the body, with a single black strap across the top of the headset for extra support.

While purely a cosmetic change, the change of colour helps the HTC Vive Pro stand out in a market where most headsets are non-descript, black ski goggle-esque devices that you strap onto your face. Though with that being said, a nice all-black Vive Pro would’ve been nice too!

Of course, the colour isn’t the only redesigned element of the Vive Pro. HTC has listened to feedback from early adopters, and has fixed many of the complaints of the first-gen headset with the Pro. The main focus for HTC was to improve the overall comfort of the headset, as the first-gen headset felt a little weighty and uncomfortable over longer stints in VR. 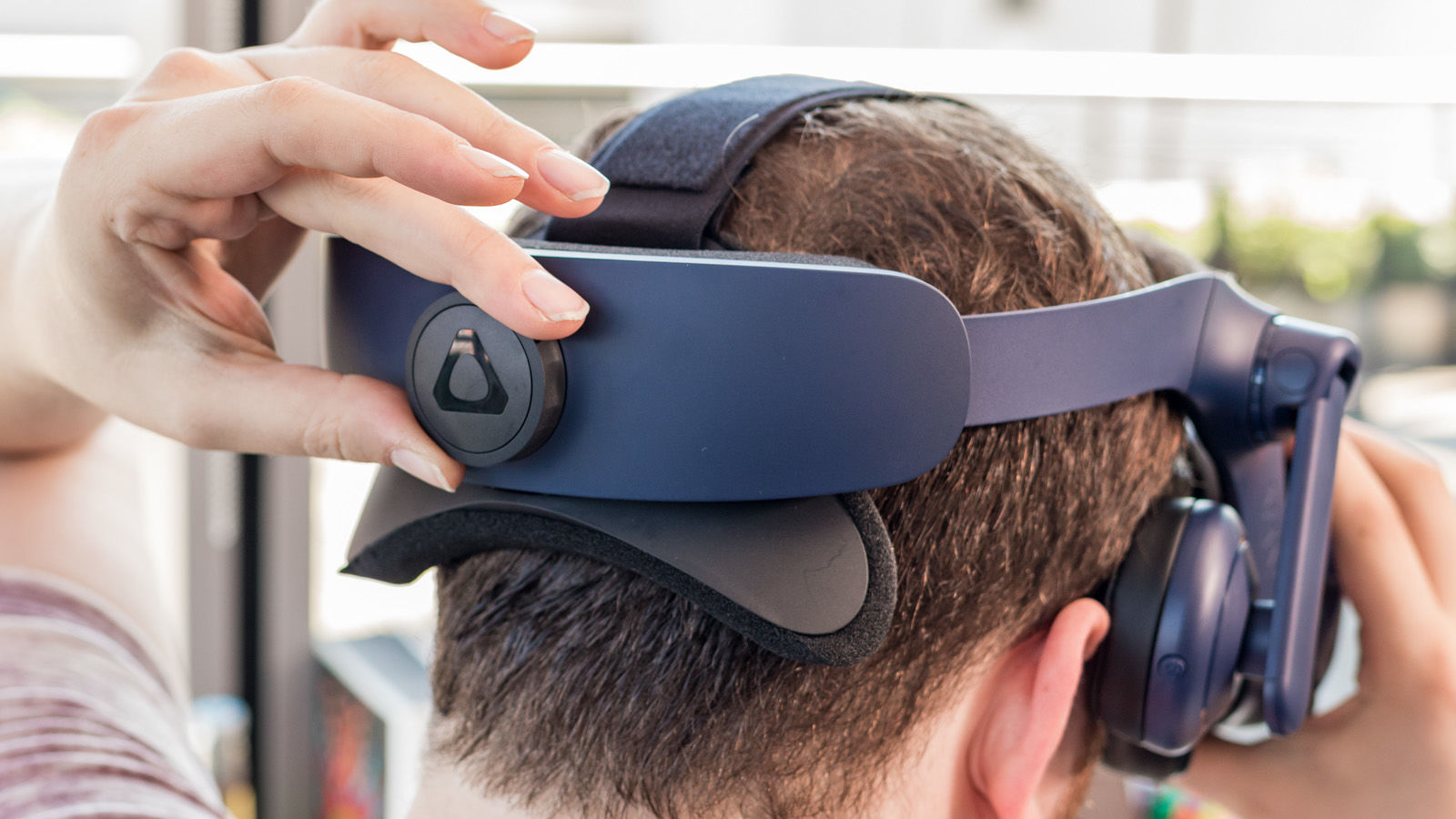 After spending a little under a month with the Vive Pro, we think that HTC has succeeded. How? First of all, HTC has ditched the elastic straps for a PlayStation VR-esque crank system. It’s a smart move from the company; we’ve always remarked that PSVR’s headset design is amongst the best on the market, as you simply slot the headset on and turn a crank on the back to tighten it to a comfortable level. That’s what you’ll also get with the HTC Vive Pro, meaning less time fiddling with straps and more time in VR. It’s also ideal when sharing the headset with friends, making it a good option for parties and commercial use alike.

The redesigned strap system helps redistribute across the whole of your head, helping to make the headset feel substantially lighter than other headsets on the market – even with a higher resolution.

Along with the new strap system, you may notice a lot of padding in the headset. There’s thicker padding around the facial surround, as well as on the arms of the headset and even on the rear where it secures to the back of your head. This stops your skin becoming irritated over long sessions in VR, especially as you get hot and begin to sweat in more physically demanding games. 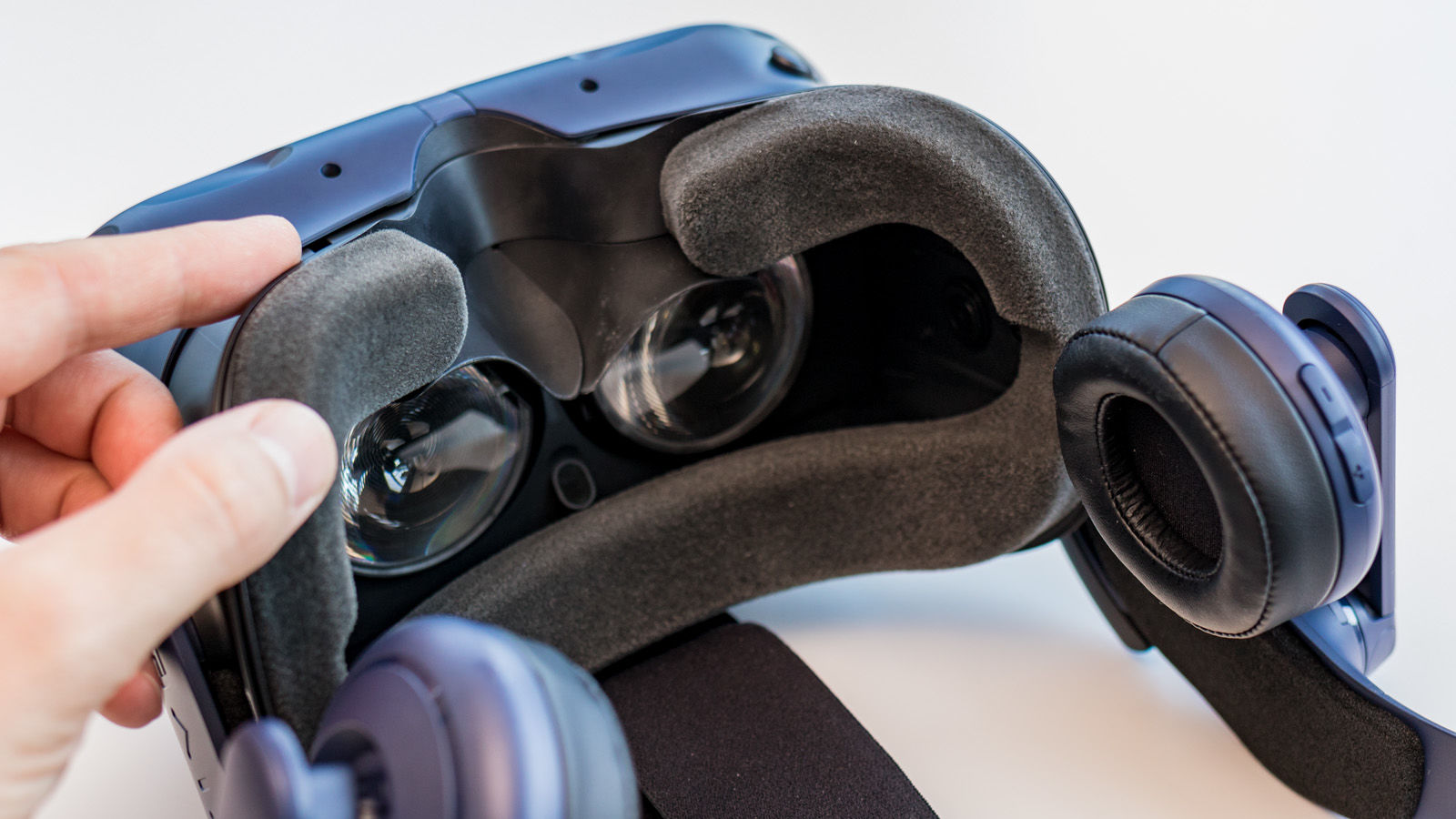 Any change that makes VR headsets more comfortable – and thus, easier to forget you’re wearing one – is welcome, and we suspect that for many existing VR users, this will be as important, if not more important than the technical upgrades of the headset.

The eagle-eyed amongst you will also notice that, like with the Vive Deluxe Audio Strap, the Vive Pro also features integrated headphones. These are slightly different to that available for the first-gen headset, as they feature volume controls on each earcup to allow quick adjustment of volume. The headphones, in general, work really well and thanks to the pivot joint, they can sit at almost any angle too.

Of course, the headline feature of the Vive Pro (and the reason many will upgrade) is the enhanced display. While the HTC Vive offers a respectable resolution of 1080 x 1200 per eye, the Vive Pro cranks to up to 1440 x 1600 per eye for a combined 2880 x 1600 overall resolution. That’s an increase of around 78 percent according to HTC, and it’s definitely not something to be sniffed at.

The increased resolution makes the HTC Vive Pro one of the highest resolution headsets available on the market in 2018 compared to 2160 x 1200 on offer from the Oculus Rift and 1920 x 1080 from PlayStation VR, though the Pro is almost double the price of those headsets. Admittedly, the difference in quality isn’t quite as dramatic as we were imagining, but it’s definitely noticeable when switching from the Vive to the Vive Pro. Edges are crisper and, most importantly for VR users, text is much easier to read. No need to lean in close to read blurry text anymore! It’s not going to completely transform your overall VR experience, but at the same time, a screen packing more pixels is rarely a bad thing.

The integrated headphones offer high-res 3D spatial audio, providing impressively accurate directional audio that’s so immersive you’ll soon forget you’re wearing a VR headset altogether. Despite not being over-ear headphones, dual microphones on the headset are used to provide active noise cancellation that performs pretty well. The microphones are also used in a brand-new Conversation Mode, allowing those in VR to converse with those in the room while still being aware of virtual audio.

As well as the tech inside the headset itself, the Vive Pro is also compatible with Valve’s newly announced SteamVR Tracking 2.0 technology. Tracking 2.0 offers support for up to four base stations, up from two with the Vive, and supports much larger tracking areas. It can track an area as large as 10x10m and also supports multi-person VR, though if all users are using Vive Pros that’ll be an expensive multiplayer session! 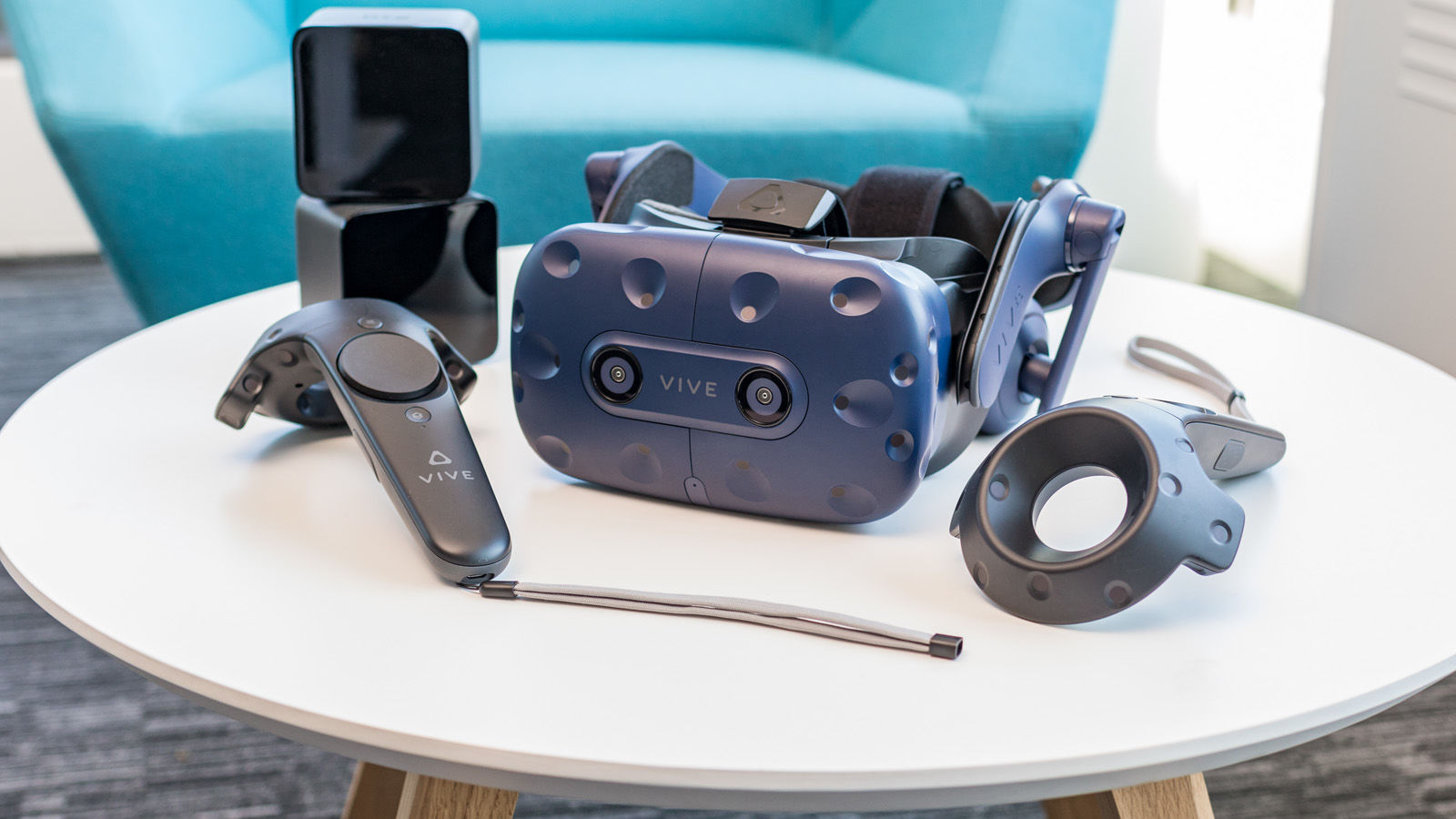 Unfortunately, we’ve only tested the Vive Pro with two base stations, so we can’t comment on the enhanced tracking on offer with the second-gen headset. The standard 1:1 tracking is as accurate as it was with the first-gen headset, with no real tracking errors experienced.

The downside, as mentioned in the price and specs section, is that you don’t get any base stations with the Vive Pro headset by default. You’ll have to buy those separately from the Vive website if you didn’t opt for the Starter or Full Kit, and at least two are required for you to be able to use the headset. It’s a similar story with the controllers too; no controllers are provided in the box, and must be purchased separately for £120 each.

This is arguably the biggest downside for potential buyers; unless you’re an existing HTC Vive user looking to upgrade, the Vive Pro with all accessories will set you back at least £899/$899.

The HTC Vive Pro is, essentially, an iterative upgrade. It doesn’t radically transform the VR experience, but it does offer a series of solid, important improvements that make the product feel much more polished. The higher-resolution display provides crisper visuals and makes text much easier to read, but when you consider the price of the headset and the fact that accessories aren’t included, not even the high resolution will be enough to tempt the majority of consumers.