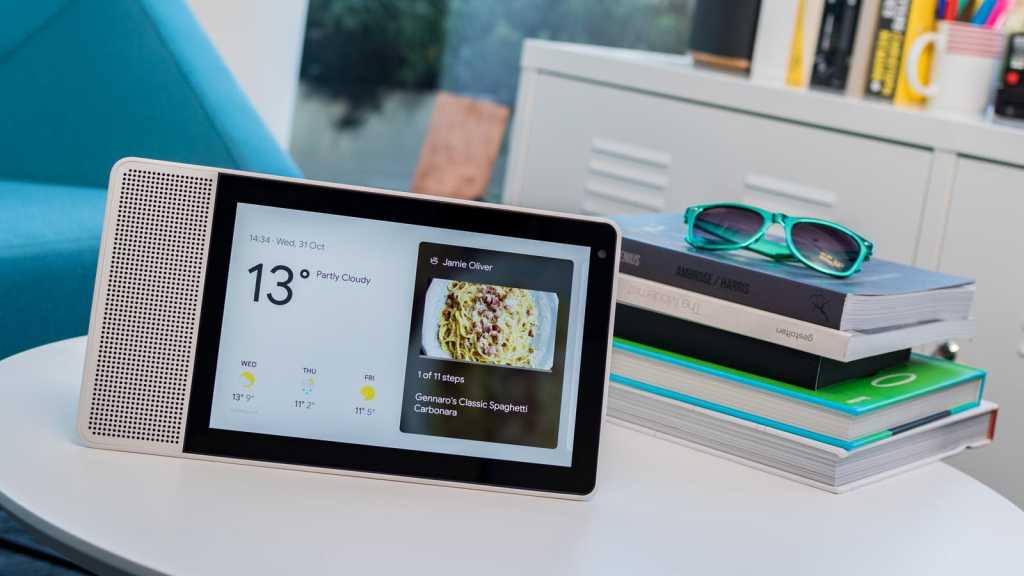 The Lenovo Smart Display is a strong start for Google’s smart display ecosystem, and probably a better option than the Google Home Hub for most users – if only for the integration of a camera for video calling. Ultimately, the irritations here are mostly on Google’s side, and mostly software – so we hope they might improve over time anyway. Lack of support for the vertical orientation and the frustratingly stripped back touchscreen controls are undeniably annoying, and highlight the occasional failings of the voice controls.

Amazon put a screen on an Echo device in June 2017, with the Echo Show (though it took a few months longer to reach the UK). Now, more than a year later, Google has finally caught up, partnering with third-party manufacturers to build its own Echo Show rivals powered by Google Assistant, in addition to its own Google Home Hub.

LG, JBL, and other manufacturers have all developed Google Assistant devices with displays, but the most impressive third-party option so far is the Lenovo Smart Display. Check out our ranking of the best smart displays to see some of the alternatives.

The Lenovo Smart Display is out now in both the US and the UK – though the US actually got it a few months earlier than us here in Britain. 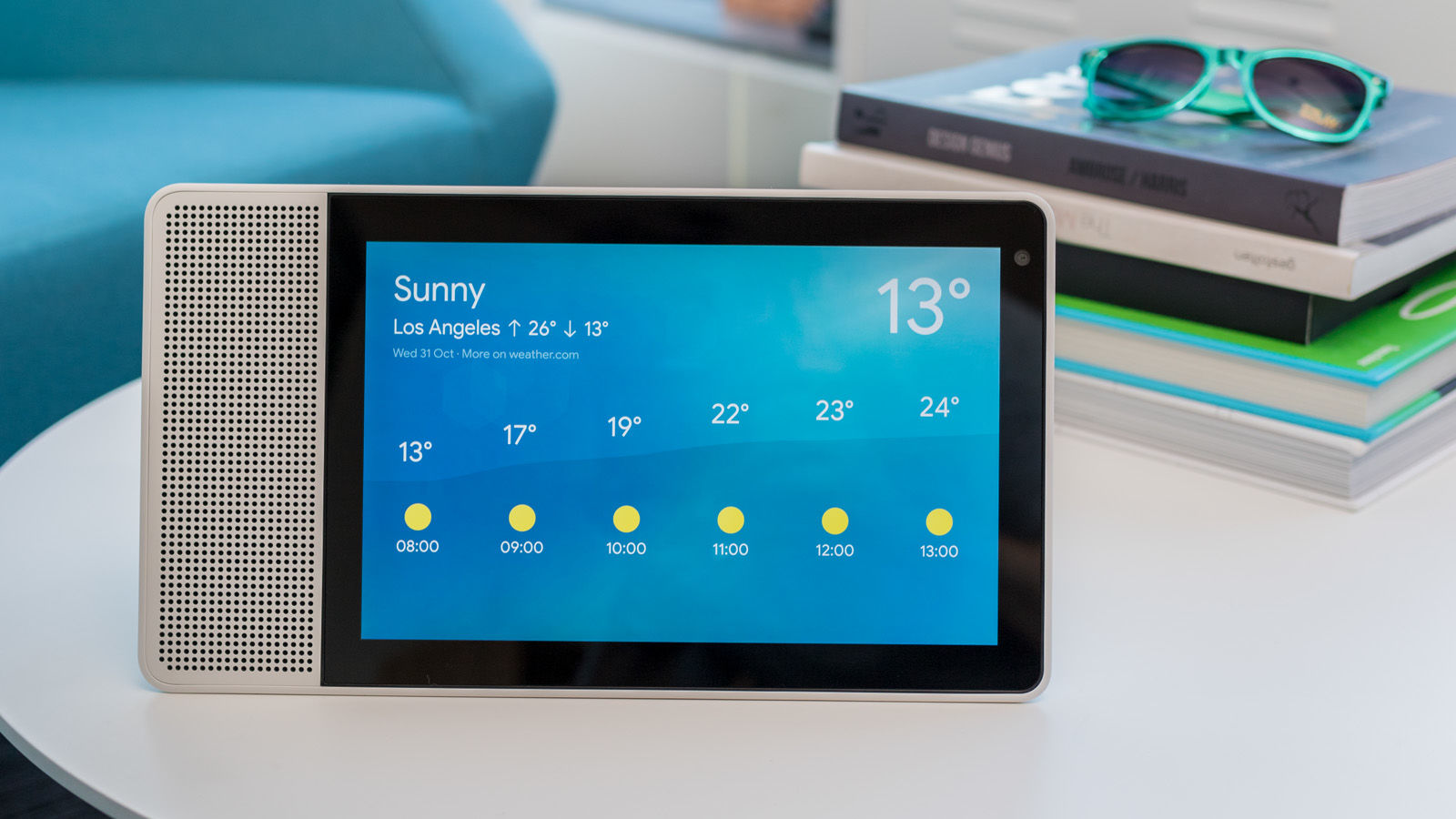 The price makes it a fair bit more expensive than Google’s own £139/$129 Home Hub – though that comes with a smaller 7in screen and has no camera for voice calls – and closer in price to Amazon’s second-gen Echo Show, at £219/$229.

All about the display

At first glance, the Lenovo Smart Display looks a lot like a tablet with an oversized speaker grille at one end – either the left-hand side or the bottom, depending on which orientation you choose. From the back though, there’s an angular wedge shape to the base to help keep it upright.

As we said above, the Smart Display comes in two different sizes: 8in or 10in, with the latter one of the larger smart displays on the market. There are a few other differences between the two models though – the most obvious being the finish. 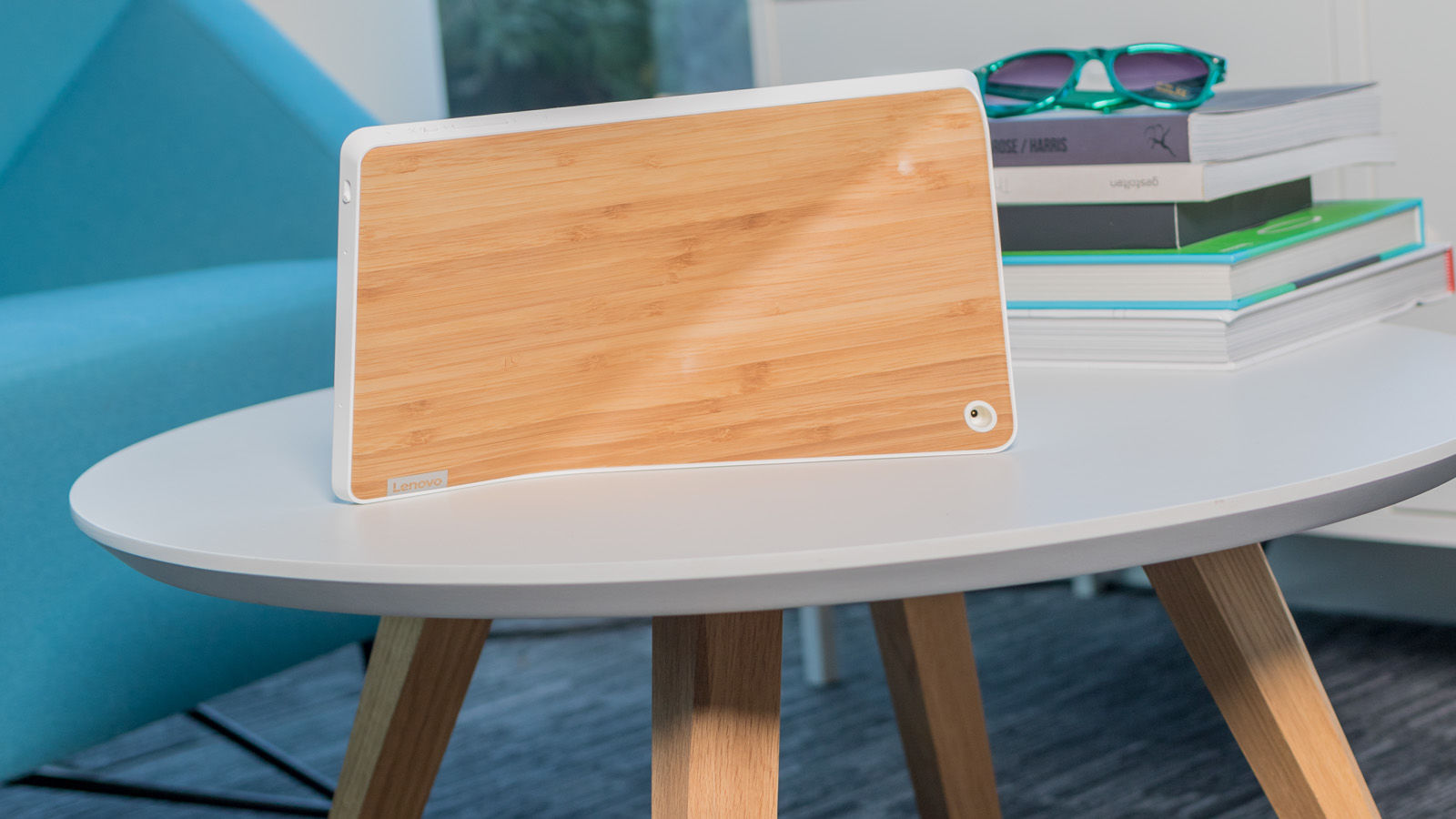 While both models are white on the front, the 8in comes with a muted grey on the rear while the larger device (pictured) comes with a bamboo finish instead. Both look attractive enough, but since they’re on the rear of the device it’s easy to imagine that many users will never even see the colour of the rear – so we’d encourage picking your model based on the screen and price, not the finish.

Both devices use IPS displays, though the resolution differs significantly between the two. The 10in display runs at 1920×1200, while the smaller screen is just 1280×800, so anyone worried about crisp video calls or HD video should make sure they spring for the £50/$50 extra for the larger screen – though of course it will take up a bit more space on your kitchen counter.

As for buttons, both devices keep it simple. Beyond the touchscreen, camera, and microphone, the only inputs are volume buttons and separate mute controls for the microphone and camera. The latter is particularly noteworthy – the button physically blocks the camera shutter, so the privacy-conscious can guarantee that the camera can’t be hacked to record them. 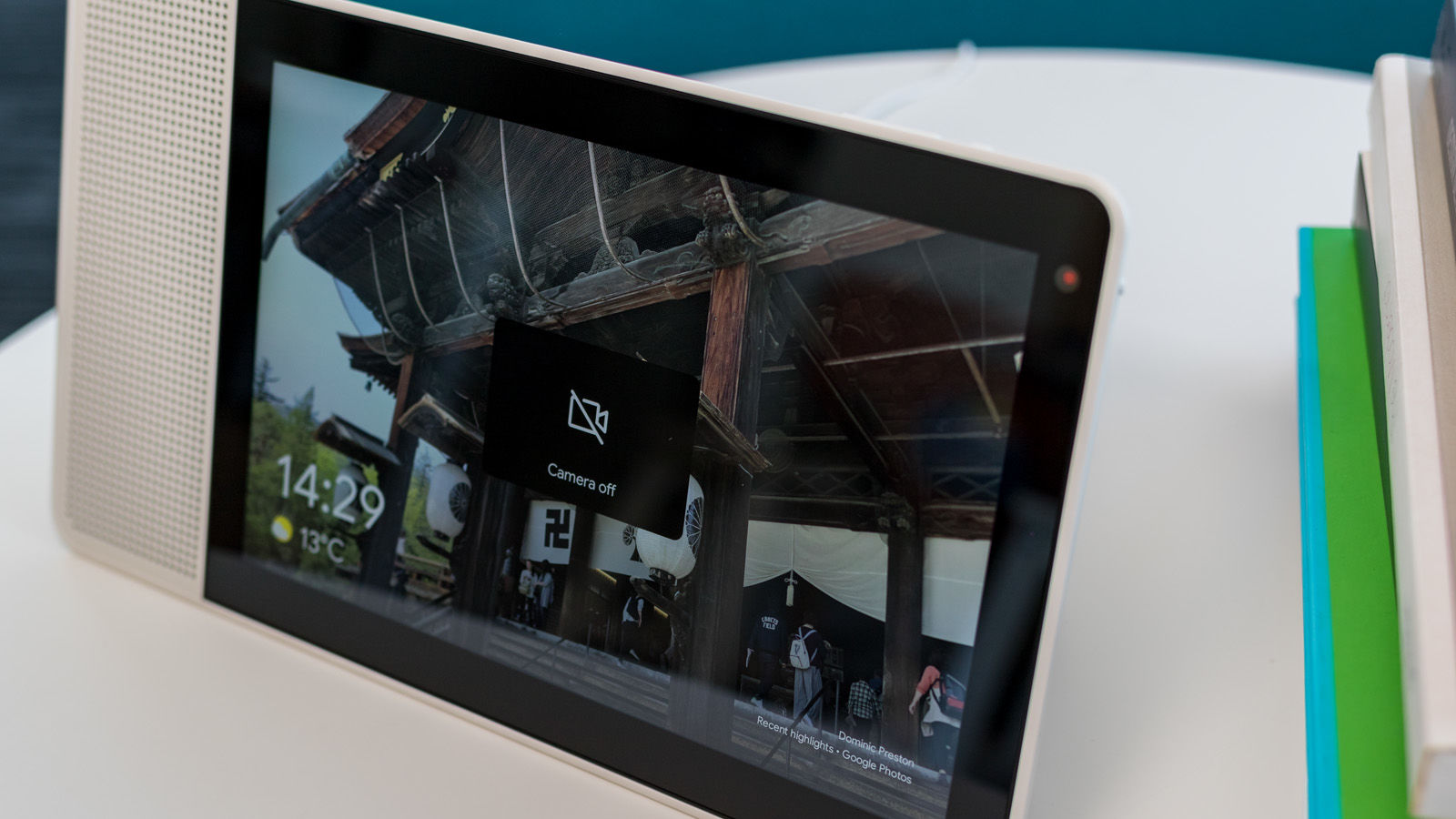 So what does the Smart Display actually do? In essence, it’s just a Google Home device with a screen. Driven by the Google Assistant, it can be used as a digital assistant to listen to music, check your calendar, ask about the weather, set alarms, and more.

The introduction of the screen adds obvious features like YouTube support and video calling, but also just simple visual aids and basic touch controls for checking the weather or seeing the recommended route to work.

Naturally, everything works neatly through your Google account, pulling through contacts from your phone and video recommendations from your YouTube account. Video calling is handled by Duo, which means it should be fairly easy to reach people – most Android phones come with it pre-installed, though you may have to persuade iPhone owning friends and family to visit the App Store first.

Duo is also the only app that makes use of a criminally under-utilised feature of the Lenovo device: the wedge. It lets you stack the display in a vertical orientation, with the speaker at the bottom, but right now video calls are the only thing that take advantage of it, with the entire rest of the UI locked into landscape. 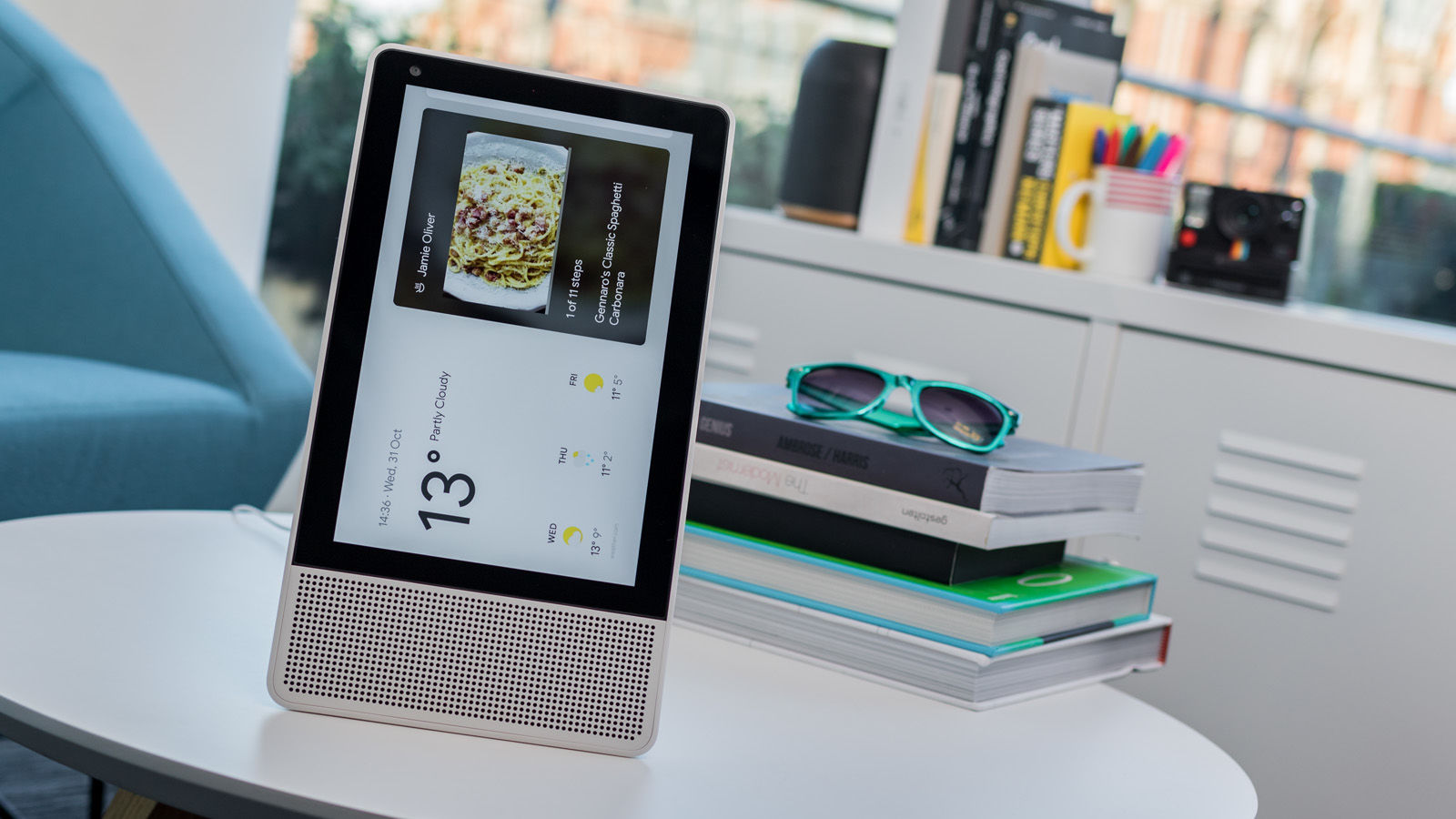 As for YouTube, not only can you watch whatever you want through the main app, but videos are also integrated throughout the rest of the experience. Google Assistant will recognise contextual prompts to help you out with appropriate videos – for example, asking Google how to prepare the rosemary in a recipe it was reading out prompted it to automatically pull up a relevant YouTube tutorial.

It’s at moments like this that the Smart Display really sings and feels valuable, but whenever the Assistant doesn’t quite get it right the experience is more frustrating. Despite appearances, this isn’t tablet, and it isn’t running Android, meaning you don’t have anywhere near as much control over apps as you do from your phone.

If you can find the YouTube video or song you want through voice commands then great, but if you can’t then your browsing and search options are exceedingly basic using the touch interface. Of course, having a touch interface at all gives you more options than a mere smart speaker, but having that touchscreen there simultaneously makes you more aware of everything Google and Lenovo aren’t letting you do with it.

Listening to music remains one of the main things people use smart assistants for, and despite the screen the Lenovo Smart Display is really no different.

You can integrate it with Spotify, Google Play Music, YouTube Music, Deezer, or Pandora to request songs and albums and to our surprise it actually doesn’t sound bad. 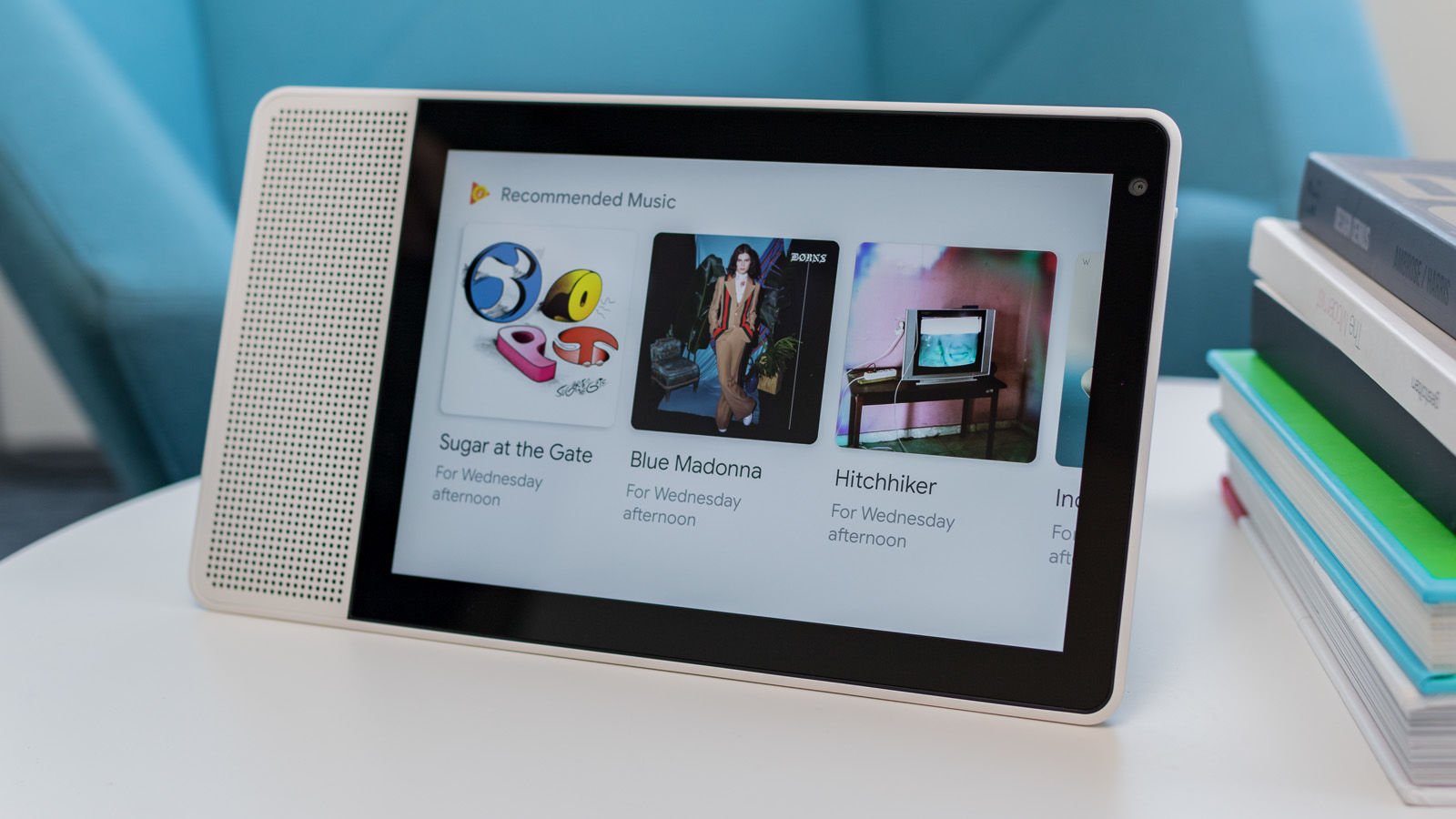 Turns out that large speaker grille isn’t just for show, and the Lenovo packs solid sound and even pretty decent bass – at least in our 10in review model, though it’s possible that 8in version will offer a bit less oomph.

You can crank it up loud enough to fill even a large room, though it definitely sounds best if you’re in front of where the display is facing. It won’t ever match a seriously high-end speaker but it’s much better than you’d expect from a device led by its screen, and potentially the best audio in any smart display so far.

Still, if you’re a serious audiophile you can always pair it to a better speaker set over Bluetooth or Wi-Fi through the Google Home app. One thing you can’t do – to our surprise – is add it to a speaker group within the Home app though, so you can’t use it as part of an existing multi-room audio setup through Google Home.

That’s just one of a number of oddities about integration between the Smart Display and the accompanying Google Home app.

You need to install the app on a phone or tablet in order to set up the Display in the first place, and it’s also what you use to connect the display up to your other smart home devices so that you can use it to control them.

That’s all fine, but what’s occasionally odd is how many controls are buried within the Home app when they could just as easily be built into the device itself. 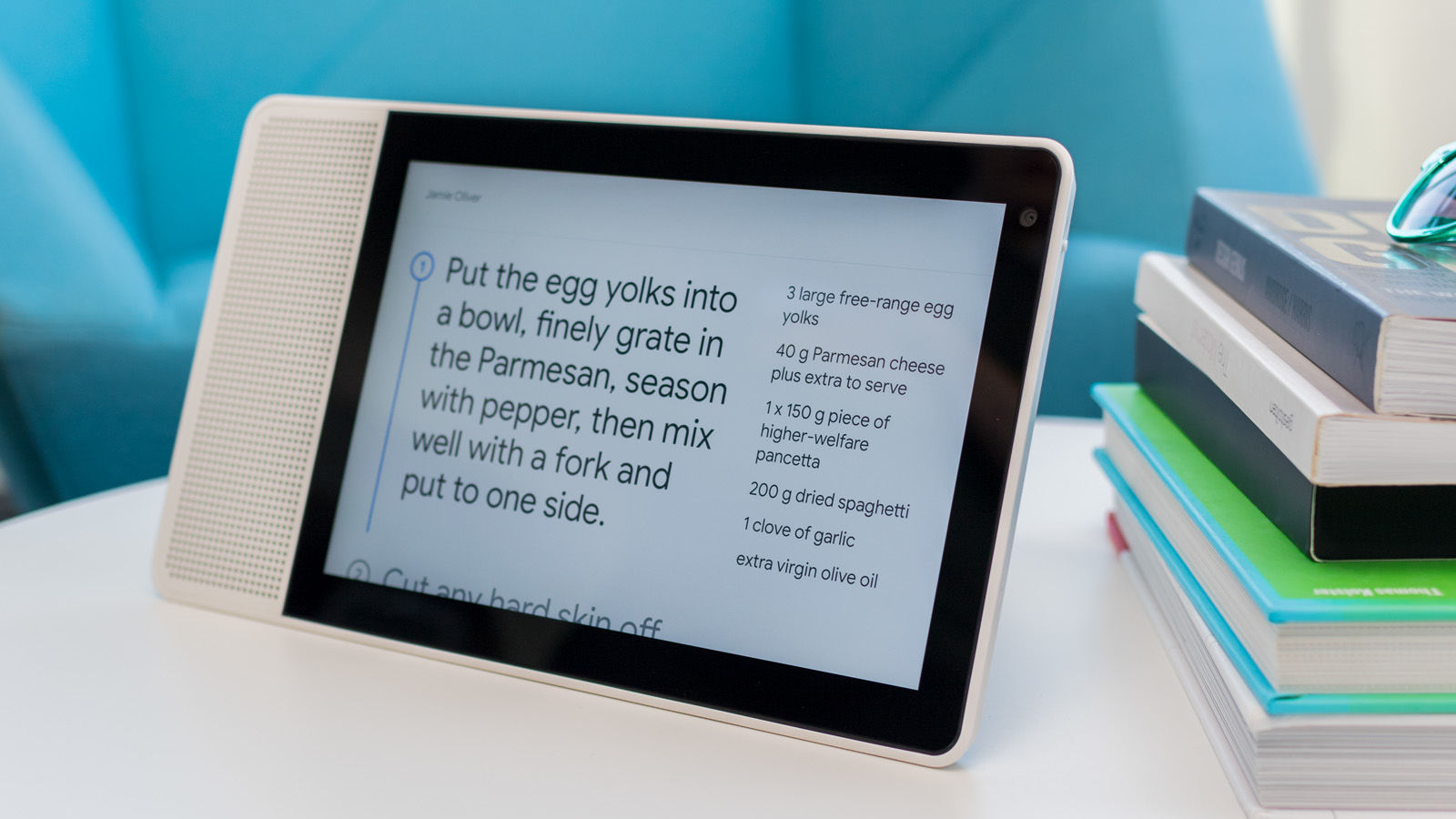 If you want to set content restrictions for your kids or Downtime periods when they can’t use the display, that’s all through the Home app. The same is true for notification controls, settings for Duo and YouTube, speaker pairing, and more.

This is also how you set up Routines, Google’s term for individual voice controls which can trigger multiple events – a single morning command to boil your smart kettle, turn on the lights, and tell you the weather, for example.

The same is true for the device’s Ambient Mode – this is what it displays when you’re not actively using it. You can have it play photos from your Google Photos library, making it a fantastic digital photo frame, but to actually change which photos it shows, you have to go to the Home app – there’s just no way to do it from the main device.

The Home app is increasingly cluttered and difficult to use, making matters worse, whereas it would seem easy to build a stripped back UI for the display itself. It just feels odd to have a fully functional touchscreen device that could include all of these settings and controls, but doesn’t. It’s an unnecessary level of irritation when you’re trying to change a couple of settings, and we can only hope Google is going to expand the Assistant’s own controls with future updates. 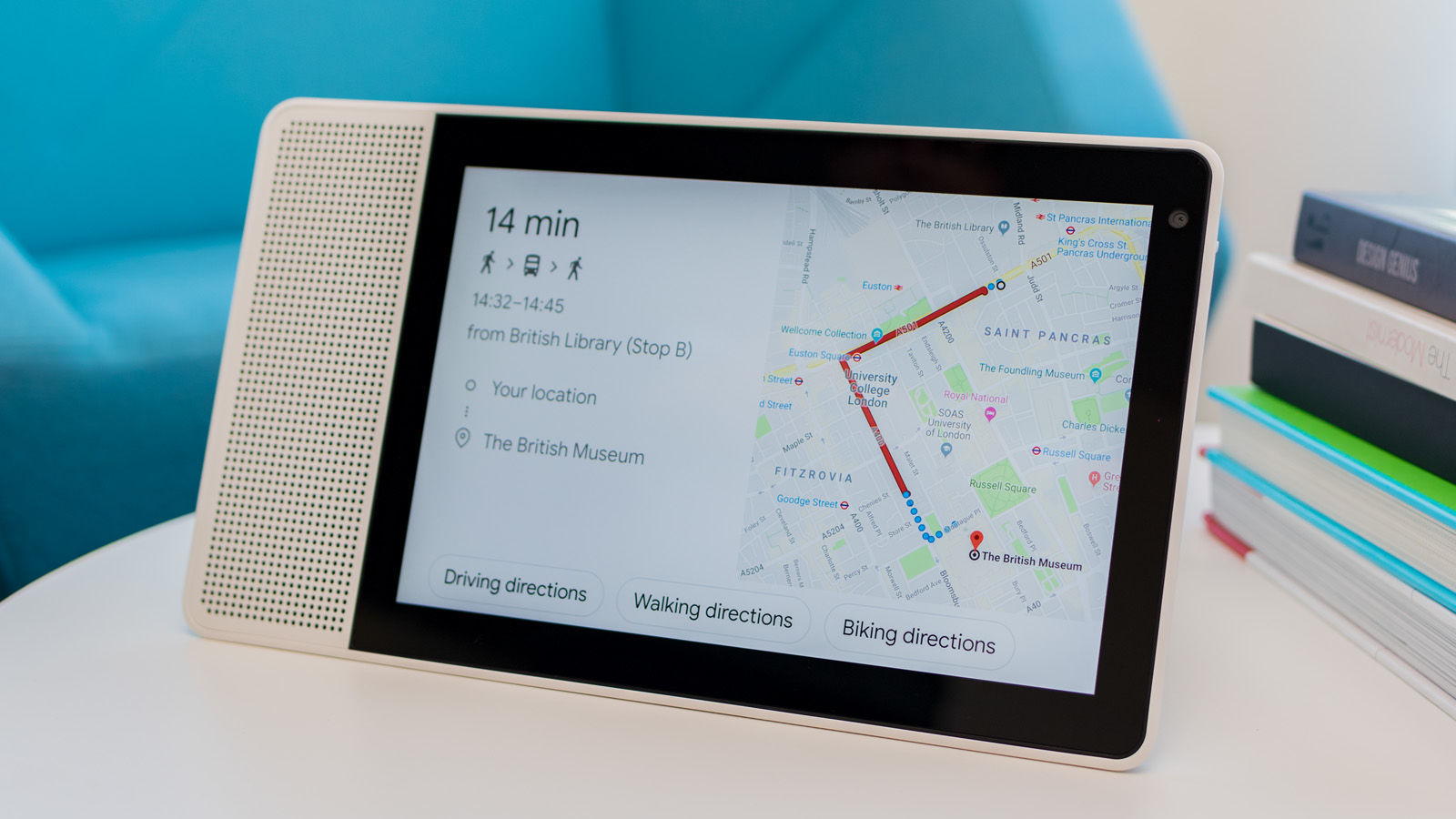 The Lenovo Smart Display is a strong start for Google’s smart display ecosystem, and probably a better option than the Google Home Hub for most users – if only for the integration of a camera for video calling.

With a big screen and big sound it should suit people with larger homes especially – if your kitchen or bedroom is cramped already, a smaller screened option might be better.

Ultimately, the irritations here are mostly on Google’s side, and mostly software – so we hope they might improve over time anyway. Lack of support for the vertical orientation and the frustratingly stripped back touchscreen controls are undeniably annoying, and highlight the occasional failings of the voice controls. Beyond that though, there’s really not a lot to complain about here.