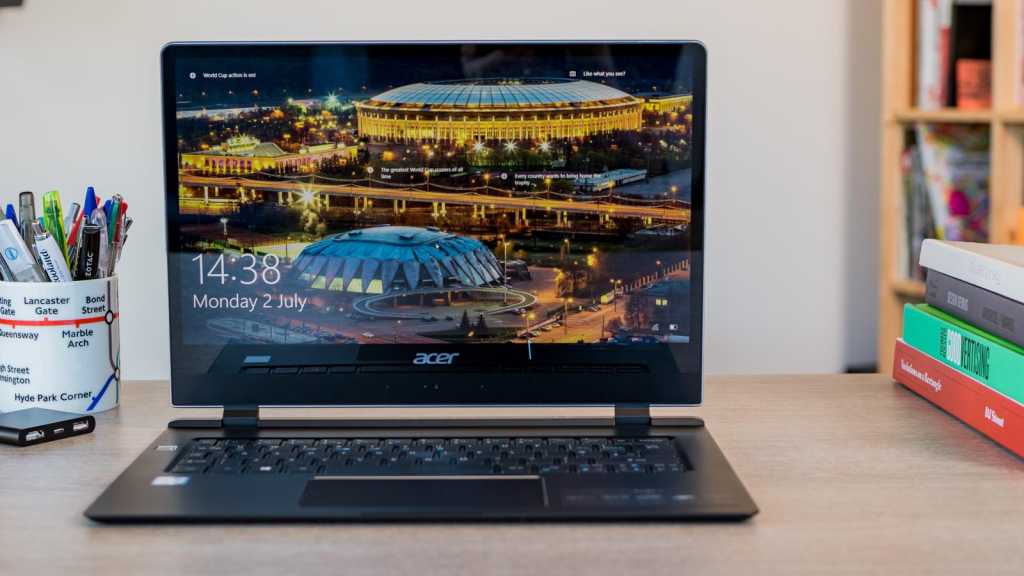 The Acer Swift 7 for 2018 might not be perfect but it’s an amazingly thin laptop that will be a great choice for those looking for a travel companion. Not only is it thin and light, build quality is great and the batter life is decent, even if you can find better elsewhere. Don’t be fooled by the Core i7 processor, though. It’s built for efficiency not performance so don’t expect the Swift 7 to cope with demanding tasks. You will also have to deal with USB-C ports (just don’t forget the adapter) and a sometimes frustrating keyboard and trackpad. It’s a mixed bag then, so it really depends what you’re looking for in a laptop as to whether it will be worth the high price tag.

We first saw the new Swift 7 back in January at CES 2018. Now the world’s thinnest laptop has arrived in our lab, beating its own record with a few upgrades thrown in for good measure. Here’s our Acer Swift 7 2018 review.

Acer said: “Building on the engineering breakthroughs from the previous generation, the new Swift 7 steps up the game with an even slimmer chassis, powerful performance and always-on 4G LTE connectivity for professionals on the go.”

Although it was supposed to be available in April, it’s not on sale just yet and it’s July at the time of writing. We’re told it will arrive at Currys PC World and John Lewis so we’ll add links when it does.

As you might expect, design is the key element here. The previous  Swift 7 was already extremely thin at just 10.16mm but the firm has managed to shave the chassis down to 8.98mm.

That’s pretty mind blowing really, especially when you consider it means the Swift 7 is actually thinner than a number of recent and new smartphones. Colour us impressed.

A thin profile also equates to a lightweight product and the Swift 7 is a true featherweight at around 1.2kg – the previous model was 1.12kg. This is because of a few things but mainly the addition of a touchscreen.

Still, it’s one of the lightest laptops around and you won’t notice it dragging you down when it’s in your bag. It’s nice to see that at this price, you get a stylish sleeve included in the box.

So it’s thin and light but it also looks the part with Acer doing a great job of making it stylish and sleek. It’s partly down to the tin profile but also some small touched like a beveled edge on the aluminium body and around the trackpad.

That aluminium uni-body is smooth to touch and also gives the Swift 7 plenty of rigidity. Something that a lot of thin laptops don’t have, making them feel wobbly and cheap.

It might not come in handy very often, but the screen can fold back 180 degrees from the shut position. That means it’s not a 2-in-1 but is certainly flexible, we just can’t think of many situations where the screen needs to be flat on a desk.

However, there are some downsides to having such a thin design and that starts with ports. We’ll look at them later but you won’t find any traditional USB ports here.

New to the design is a fingerprint scanner to the left of the keyboard. Like other elements it has as shiny bevelled edge. It’s means you can log into Windows a lot quicker, although not when you have to try it two or three times, which does happen.

As the Swift 7 is so thin, it’s difficult to offer a really great typing experience. Keys need space to work to the desired effect really.

The keyboard might be backlit (simply on or off) and there’s some travel, but not much. Depending on what you’re used to, the change could take some acclimation. Some may like the sharp, crisp action.

As is so common, many keys are smaller than we’d like. For example the four arrow keys, along with two function keys, are all squeezed into the space of just three regular keys. The ‘Del’ key is also very small, sitting next to backspace.

We actually have more of an issue with the trackpad. It’s large and responsive but has no push-to-click which can make things pretty tricky and frustrating when you don’t have a mouse and need to do more advanced things.

For example, even dragging and dropping an element is hard as you need to double tap and move in once fell swoop. There’s also no right-click so you’ll need to do that with a two-finger tap.

One upgrade on this new Swift 7 model is the display which, to a small extent, explains the price rise.

For starters, the screen is larger at 14in – up from 13.3in within the same size frame. Bezels are smaller and the Full HD IPS display is now touch sensitive, which these days we find far more useful than when laptops first started getting touch.

It’s no Dell XPS on the bezel-front though and we don’t love the large glass section below the screen with the Acer logo on and then another bezel below that which houses the webcam and microphones.

A webcam below the screen is never a good placement, so bear this in mind if you’ll be using it a lot.

The display might not be 4K, but really most consumers don’t need an Ultra HD resolution on a laptop. It would mostly hinder performance and battery life. At Full HD, the Swift 7 is perfectly crisp and offers good colour.

It’s also brighter than the Swift 5, at 291cd/m2. Over 300 would be better but you can pump this to max when in bright conditions and you’ll still be able to work. The display is glossy and does reflect, therefore.

It’s a shame that despite being a few hundred pounds more expensive, the Swift 7 for 2018 comes with a 7th-generation Intel processor. We’d expect 8th-gen now they have been announced and available for a while.

That said, it is a Core i7 chip which is an upgrade from the Core i5 in the previous Swift 7. This is sort of a faux i7, though as it’s not built for performance as you might assume.

It’s the i7-7Y75 which is designed to consume as little power as possible. It’s just 4.5W – where many are ten times the power rating – and is only 1.3GHz and dual-core. You might have a more powerful chip in your phone.

There won’t be various different configurations of the laptop so you’ll have to be happy with 256GB of storage and 16GB of LPDDR3 RAM. We’d expect a little more at this price point really.

The memory should be enough for most people but double the storage would be nice.

With a focus on being low-power, it’s not a huge surprise to find benchmark results lacking a little. In PCMark 10, the Swift 7 scored 2600 and in Geekbench 4 it managed 6432. On the graphics side, it provided a score of 3285.

So if you’re just looking for a light laptop to do basics like word processing, web browsing and similar then you’ll be fine. Otherwise, you need to look for something with more grunt.

As mentioned earlier, there are no traditional full-size USB ports here. Instead, you’ll find a pair of USB-C ports (one for charging), a headphone jack and on the other side is a power button and a nano-SIM slot.

That’s pretty limited but Acer does at least supply an adapter that provides USB-A,HDMI and USB-C.

Earlier we mentioned the nanoSIM slot but there’s also an embedded eSIM. Acer says the Swift 7 ships with a Transatel profile provisioned with up to 1GB of free data valid for one month in 48 countries, including the UK.

Like the HP Envy x2, 4G LTE connectivity on a laptop will be extremely handy for some users and the Swift 7 also has 802.11ac Wi-Fi with a 2×2 MIMO antenna at the bottom of the lid.

Despite a Dolby Audio logo adorning the chassis, it’s hard for any laptop this thin to provide decent sound. A pair of stereo speakers sit underneath and, let’s face it, aren’t going to set the world alight.

You’ll be ok if you’re just watching something on Netflix in a quiet room.

Acer claims battery life at a decent 10 hours, via Mobile Mark 2014. That’s more than its predecessor and impressive when you consider how little room there is for the battery is a laptop this thin.

Considering the low-power Intel chip in the Swift 7, we were sort of hoping for a lot more. Especially with the Swift 5 lasting a decent enough 10 hours and 32 minutes.

That’s not to be sniffed at and is a good few hours longer than its predecessor – and lot of chunkier laptops. Still, you can get a lot more for less money if it’s battery life you really need. The Surface Laptop, for example, lasted a whopping 16 hours in this test.