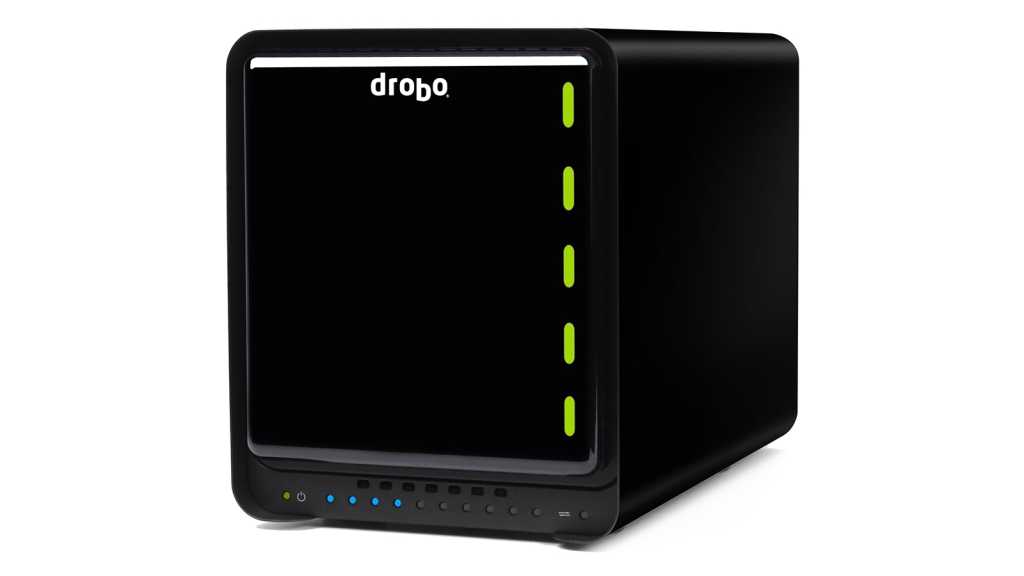 It might be relatively expensive, but the flexible RAID system that can handle multiple drives of different size could be a major cost saving for many users. The performance, build quality and expanding app selection also makes the Drobo 5N2 a highly desirable solution.

Home- and small business storage systems are very popular, as the amount of data most people acquire has rapidly expanding in the past few years.

While it’s mostly aimed at demanding home users, the Drobo 5N2 – a five-bay NAS drive – could be used by a small business unit to provide a quick and flexible means to secure files and distribute them easily.

But how does it differ from a dozen other NAS boxes, and is this one worth the additional cost?

The list price of the Drobo 5N2 is £576.99, although you can buy it from Amazon for a more palatable £442 at the time of review. That’s a bare system without any drives, so unless you have some unused SATA disks, you’ll need to factor those into your budget.

Frankly, though, if you don’t already have spare drives and you don’t need five bays, you may be better off opting for a cheaper NAS and buying matching drives. See our chart of the best NAS drives for cheaper alternatives.

US pricing for the standard 5N2 is $499, and stateside you can also get this hardware with drives pre-installed.

The 5N2 also comes in Gold and Platinum special editions that include mSATA cache modules, a period of DriveSavers Cloud backup and five years of premium DroboCare.

There’s also the marginally cheaper 5N model sporting similar hardware but only a single Ethernet port. Or, the SD3 that has no Ethernet ports, but instead has dual Thunderbolt and a USB-C port for direct connection to a single PC.

Most competitors only make four-bay systems, not five. The only five-bay solutions that Synology makes are the DS1517 and DS1517+, both of which cost considerably more than the Drobo 5N2, costing £650 to £850.

Four-bay barebone NAS drives can easily be found for less than the Drobo 5N2, but the maximum storage capacity will only be 80 percent of what this unit offers.

A NAS boxes go, the Drobo 5N2 is robustly constructed, promoting that it is something special from the outset. The pressed steel outer skin is of a thickness that doesn’t easily flex or distort, and the finish on the parts is exemplary.

Inside this shoe-box scale tube are bays for five 3.5in SATA drives, although with those metal trays you can cheaply buy for Micro Servers, you could also place 2.5in mechanisms in it.

The drive bay design is an entirely tool-free one that doesn’t use trays for 3.5in drives, so you won’t even need a screwdriver to install them.

Access to the drive slots is behind a magnetically attached front panel that has inbuilt windows for viewing the status LEDs of the drives.

Beneath the bays is a simple LED scale that provides a clue as to how full the system currently is, and when it might be a good idea to whack another, possibly bigger, drive in.

On the back are two gigabit LAN ports that can be channel bonded, allowing the 5N2 to talk to two clients at full 110MB/s speed or one that’s also channel bonded to a suitable network switch.

The only other external feature is a small access hatch on the underside that allows you to get to a mSATA slot, intended for a caching SSD to be installed.

Given that mSATA has been overtaken by M.2 technology this feature does seem a little dated, although if you are working the 5N2 hard, investing a relatively small amount in a 120GB mSATA SSD might be a beneficial upgrade.

Curiously, there are no USB ports. Therefore, all the data that goes on this machine will be via the network, and any backups must travel the same route.
Where the Drobo 5N2 truly stands out is how it handles drives and the advantages that unique approach offers the user.

If you’ve previously owned a NAS box that can take more than a couple of drives you should be familiar with the various concepts of RAID (Redundant Array of Inexpensive Disks).

The various RAID modes define how drives are mapped as a group to enable resilience, performance or any combination of those requirements.

With the five drives that the Drobo 5N2 can accept the obvious choice is RAID 5, where each drive holds two bits from each other drive, allowing any single drive to fail without data loss occurring.

The Drobo’s hybrid RAID mode isn’t like RAID 5, or rather, it’s like RAID 5 will some intelligence applied to it.

Because what most RAID modes insist on is that all the drives are the same size, where on the Drobo is doesn’t matter. It will map multiple small drives to secure the content of larger ones, intelligently.

The review model came with four drives; a 4TB, 2TB, 1TB and a 500GB unit. In a conventional RAID 5 system that would have only provided 4 x 500GB of space and just 1.5TB of usable space.

But on the Drobo, the available space is 3TB, because the 2TB and 1TB drives are securing most of the data on the 4TB.

We added another 4TB drive (Seagate Iron Wolf 4TB), and the capacity immediately jumped to 6.64TB, releasing almost all the extra storage on the new drive.
For those that are paranoia enhanced, particularly IT people, there is also a dual-disk redundancy mode, where two drives can fail without complete catastrophe.

How the available space in these scenarios is calculated may be somewhat complicated, so if you have five drives in mind to use with one, Drobo has kindly provided a storage calculator on its website that will tell you how much resilient space any drive combination should deliver.

The beauty of this solution is that you can start small, with a couple of drives perhaps, and add more drives when you need more capacity. Once all bays are occupied, a rolling upgrade plan can be initiated where the smallest drives are removed and replaced with larger ones.

We’ve tried doing something similar on other NAS boxes, and the process often doesn’t go smoothly. Because reorganising the pack structure can take days with large drives, and you won’t fully see the capacity advantage until all drives have been swapped for larger ones.

Therefore regarding drive management, the Drobo 5N2 is certainly a market leader. But, how is it in respect of the other services that NAS boxes provide?

It’s hard to talk about NAS without using the ‘S’ word, specifically ‘Synology’. Comparing the Drobo 5N2 to what Synology is offering, the closest hardware is the DS1517, although that model does have four LAN ports and the ability to connect another ten drives through expansion boxes.

Where the Drobo doesn’t compare is in the number of apps available, with Synology offering 100+, and Drobo having just 46 listed on their Drobo Dashboard configuration software.

That said, those on offer are really good quality and include the likes of Plex, WordPress, Apache, MySQL, Python, Ruby and Twonky’s DLNA/UPnP Media Server.

There are also tools that are designed for remote access, to work with mobile devices, and provide FTP serving. Most of these do assume a level of technical knowledge to use, but they’re all relatively easy to install and manage.

For the less ambitious user, getting the unit operational is very easy as this is one of the few NAS boxes we’ve seen that you can access the control interface without any drives installed at all.

Because the OS lives on flash memory in the 5N2 that allows you to remove all the drives and place them inside another Drobo box in the event of failure, and you don’t even need to put them back in the same slots.

Starting with a bare system and five drives the system was ready for use in under 20 minutes, which is very quick by personal NAS standards.

Our only reservation about this design is the lack of a USB port, a feature that would allow the Drobo 5N2 to create additional local backups to an external drive or be a print server.

In all other respects, this is a very solid piece of technology that addresses the typical storage problems that most home users encounter when managing their NAS solutions.

The speed of this NAS box, even if you’ve only got a single Ethernet port connected is excellent.

Benchmarking a network shared folder we managed 118.5MB/s reads, and 117.8MB/s writes, leaving almost nothing at the bottom of the gigabyte LAN bandwidth barrel.

For those with multiple machines or a channel bonding switch and dual LAN ports, those numbers can be doubled, though you probably need at least three drives installed to get the full effect.

Because of this inherent speed we never actually explored what adding a mSATA SSD did, as we’d already hit the practical ceiling of gigabit Ethernet. It might help if you have lots of small files or more than a couple of users for caching repeated requests effectively.