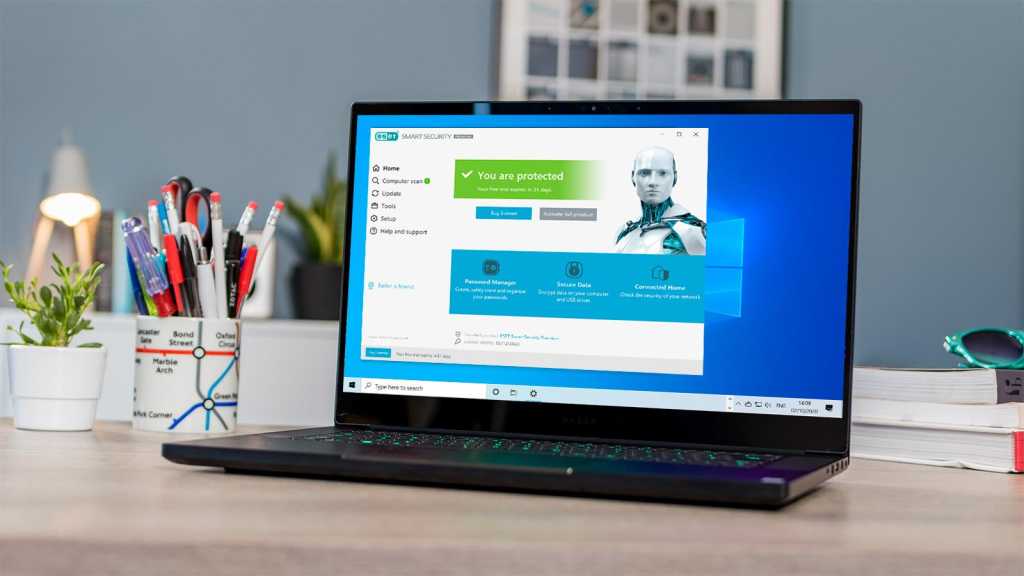 Solid protection from all kinds of threats, but even Smart Security Premium isn’t the most comprehensive security package out there

If you’ve somehow not heard, 2020 has been a big year for malware. Coronavirus has presented a huge opportunity for cybercriminals to trick you into installing malware or even steal your logins or money by playing on your fears.

This means every security company – including ESET – has beefed up protection with improved machine learning for better detection of threats, including those arriving by email.

The company has also stepped up behavioural detection, which watches out for any abuse of system files and other activity. In particular, it says that the Internet Security and Smart Security Premium 2021 (both of which use version 14 of the antivirus engine) are better at detecting ransomware or any other malware which is making suspicious calls to encryption and decryption APIs.

This kind of language may be beyond your computing knowledge, and this theme runs through a lot of the more advanced tools and settings within ESET’s Windows app which can require you to be something of a network expert or super-geek to understand and use.

That’s not to say ESET is a bad choice, far from it. It’s simply that ESET hasn’t yet done what some rivals have and made its interface and notifications easy to understand even if you’re more technophobe than technophile.

Indeed, ESET’s protection is excellent, on the whole, and once installed and set up you can largely leave it to its own devices assured that it will stop your filed being encrypted by ransomware and your system being crippled by malware. If you really like to play around and tweak there are lots of options for the notifications alone, allowing you to choose what you see and how long alerts appear for before they close automatically.

We’re focusing on the Windows app here, but you can use your licence(s) for Android, macOS and Linux if you prefer.

In the years we’ve been reviewing ESET, it has always scored very highly in tests conducted by AV-Test, AV Comparatives and SE Labs, but beyond top flight protection, what do you get?

One of the great things is that none of Internet Security’s modules are simply opportunities to begin free trials of extra software, or cut-down versions of modules whose full versions are extra paid software. We see this so often in rival antivirus products so this is a huge plus for ESET.

There’s the Connected Home Monitor which scans your local network looking for hosts and open ports. You can opt to scan your router, or just scan your devices to cut down scan time. Like many comparable products, when a new device joins your network, a pop-up alerts you, meaning that neighbours cannot secretly leech your Wi-Fi.

And if you ever have your laptop stolen, a sophisticated anti-theft module allows you to send an onscreen message to the thief along with a webcam snapshot of his ugly mug.

On installation, you’re asked if you’d like to detect potentially unwanted programs (PUPs) trying to install themselves, which is another welcome touch as most security suites don’t even detect them unless you run an in-depth scan. PUPs can affect the stability of your devices, as well as being irritating if they’re nagware, and also posing security risks.

ESET’s user interface remains its usual sparse self, which is largely a good thing. There are three tools on the main menu, the Connected Home Monitor, Password Manager and Secure Data. The latter two and only in Smart Security Premium. Opt for Internet Security instead and you’ll see Anti-Theft and Banking & Payment Protection instead.

To see the full array of tools available to you, these are split between Tools and Setup in the menu to the left. Click Setup and things are broken down into four areas of protection: computer, internet, network and the rather miscellaneous-sounding ‘Security tools’.

Click Computer protection to get to Device control and Gamer mode. The first offers full control over your computers ports and devices, such as the DVD drive. It could be useful if you want to prevent your kids from plugging in USB drives, but for most people it will unnecessarily complicated to set up. Here you’ll also find webcam protection, which is enabled by default.

Gamer mode is – as the name suggests – a way to stop ESET displaying notifications or running scans while you’re playing games. This can be set to enable automatically whenever you run an app full screen.

Banking and Payment Protection has been improved: you can either use the included secure browser or you can choose to use your existing one which gets toughened up with proper encryption whenever your using your bank’s website or any other site, such as managing cryptocurrencies. You’ll know when it’s working as your browser will have a green outline around it.

The anti-theft module is rather fun. It operates by creating a “phantom” account on the protected computer, which you name. Mr (or Mrs) Thief will then log into this account if the try to use your laptop.

You can take pictures of them via the anti-theft page on the ESET web site, and also track their location. You can send messages and those pictures to show you’re spying on them. You can even remotely access and retrieve your data from the machine, though it can’t wipe the hard drive.

The SysInspector tool, mentioned earlier, is one you could easily miss. It’s a separate app that you run from the Start menu (search Eset) and it analyses your entire system, assigning a risk level to every component, from the registry to network connections.

This is could be great for seeing exactly how secure it is, but it’s not particularly user-friendly and unknown processes and apps are highlighted in red along with known-risky ones. This means you’re left not really knowing whether there are problems or not: it’s down to you to search online to check out what the offending items are, and whether they’re genuine threats or not.

Speaking of tools and features which are hard to find, it looks at first sight that there is no explicit ransomware module, but deep down in the advanced setup screen under HIPS (Host-based Intrusion Protection System) there’s a slider indicating this module is active.

Although we praised Eset for not including trials or cut-down modules that you have to pay extra for to get all the features, the parental controls are a disappointment. Really, it should be renamed Web filters as that’s all it is. And when you go to enable it, you’ll realise you have to set up password-protected Windows’ child accounts.

There’s nothing there to restrict screen time for categories of app or limit when that account can be used. So don’t buy ESET Smart Security (or Internet Security) thinking it will save you a separate subscription on parental control software.

Finally, it’s worth mentioning the firewall. Though it is ‘enabled’ by default, it simply replicates what the Windows firewall does and allows all outgoing traffic. It can manage that outgoing traffic, but you’ll to delve into the settings and switch it into Interactive mode.

You’ll then get a pop-up each time an app tries to access the internet and you have a choice of asking every time it does so, remembering your decision until the app is quit or creating a rule  that applies permanently.

It’s just a shame there’s no list of known-safe apps so it can only ask when there’s a potential problem: again asking you to do the work instead of doing it itself.

Across the board, ESET scores extremely well for known and zero-day threats. We have no question that it is among the best anti-malware software available.

You can have a closer look at the test results in the latest AV-Test report.

It also came out well in AV Comparatives more recent tests in September 2020 where it achieved a very respectable offline detection rate of 90.3% (where many rivals fall down) and a 99.98% online protection rating. Its 2 false alarms were the fewest of any rival.

Fortunately, it barely affects app loading times, and has less of an impact than most security software.

Before we talk price, it’s worth noting that even ESET Smart Security Premium doesn’t have some features that rival packages do. These including ID monitoring (watching the dark web for your email address and other login details which may have been hacked and are for sale).

There’s also no VPN service, nor any cloud storage or backup.

The latter two – you could argue – aren’t antivirus or malware features so shouldn’t be in an internet security package or that the VPN services included with rivals aren’t even that good. Regardless, you don’t get them when you buy ESET.

You might also be annoyed that there’s no app for iPhones. But in ESET’s defence, so-called ‘antivirus’ app for iOS don’t actually scan for or block viruses… because they can’t. So this is an understandable absence.

Although we’ve reviewed Smart Security Premium here, this differs from Internet Security only in that it includes tools for encrypting files and external drives, as well as coming with a password manager.

Internet Security costs £39.99/$49.99 for one device for one year. It’s an extra £5 / $10 to add extra devices. This may not sound as cheap as rivals, but those tend to use very cheap ‘introductory’ offers and then boost the price upon renewal. ESET doesn’t do that: the price is the same – barring any increases down the line – for subsequent years. And you can save 15% if you sign up for two years, and 25% if you go for three years.

You can protect up to 10 devices (the total cost is under £100/$100 for both packages), so the more you have, the cheaper it is to put Internet Security or Smart Security Premium on them.

You can also have a look at our other recommendations for the best antivirus software.

ESET Smart Security Premium – and Internet Security – are effective tools for protecting your files and computer from malware and while there is a bit of a negative impact on performance, the worst is when installing apps – something you won’t do all that often.

If you have a family’s worth of devices to protect it’s not bad value at all when you consider the cost per device, but it’s certainly not the cheapest out there.

It’s also not the most user friendly, which is fine if you want to install and forget about it, but it does mean it’s better suited to geeks who like endless options and plenty of customisation.

We like the gamer mode, but not so much the barely-there parental controls. At the default settings, the firewall is no different that what you get as standard with Windows 10.