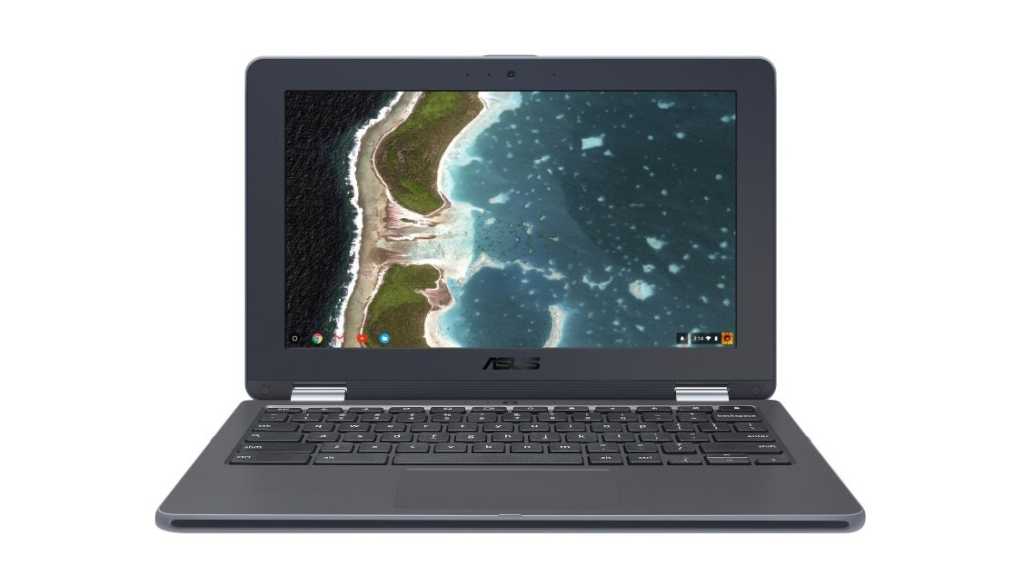 The rugged construction of the C213 will definitely appeal to those who intend to either give this to a child or want to use it themselves in harsher conditions. Having an easy to repair modular design is a welcome feature in these days of soldered laptop components. It’s a tough machine that also offers decent performance at a price that, while higher than some Chromebooks (and regular laptops), is still acceptable. The only real drawback is the average display, which does seem a slight misstep in the now HD world.

Chromebooks have long been a favourite of education establishments, and parents, as they offer plenty of computing power for very little outlay. They’re easy to set up, maintain, and avoid many of the virus and malware dangers posed by other machines.

The new Asus C213NA adds something else to this potent recipe – a rugged build and modular construction that makes it easy to repair. We take a look at the Chromebook that’s made to take a beating.

So it’s cheaper than a lot of laptops, but bear in mind that the likes of the Acer Spin 1 are priced at just £279.

Undoubtedly the thing that marks the C213 out from the crowd is its durable casing. Both the surrounds of the lid and main body are enveloped within a rubber protective binding that should protect against drops from tabletops.

The outer casing is also covered in a textured material (we’re pretty sure its plastic) that is supposedly there to prevent scratching and fingerprint marks. It seems to do the trick, while lending the device a tough, militaristic aesthetic.

This durable approach continues inside, where the chiclet keyboard features a spill-proof construction that Asus states has been tested to repel up to 66cc of liquid. In operation the keys are decent, if a little spongy and high, presumably to make room for the liquid. A small, but perfectly usable trackpad completes the set.

Should the worst happen and the C213 sustains any damage, then its modular design means the keyboard, motherboard, battery, and thermal module, can all be removed and replaced within minutes. This is quite a departure from the sealed laptops we’ve grown sadly used to in recent years.

As this is one of the Flip series of Chromebooks, the two thick hinges enable the device to move through 180 degrees. This means it can be used as a standard laptop, placed in the tent mode for hands free touchscreen fun, or wrapped around completely if you want a makeshift tablet.

The hinges are strong, and the unit remained stable and secure in the various orientations we tested.

One unique feature that takes this versatility into account is the dual webcams. One is in the normal upper part of the screen, while the other is situated above the keyboard. This is useful because when the unit is folded over so that it stands on the two lower edges (resembling a tent) then the camera is once again at the top. Clever.

An 11.6in touchscreen display lives within wide grey bezels that make the C213 resemble old field laptops you might have seen in the wild. The 1366×768 resolution is not dissimilar to many Chromebooks we’ve reviewed, but does feel a little dated now that Full HD screens have become the norm. Its anti-glare, matte finish helps in bright lights, but gives the display a slightly frosty look which again feels behind the times.

Ports are generous for a small device, with two USB 3.1 Type C apertures that can be used to charge the device or other ones that you plug into it, two USB 3.1 Type A slots, alongside microSD, 3.5mm headphone jack and a Kensington lock.

An 1.1GHz Intel Celeron dual-core N3350 processor is at the heart of the C213, which is a capable if not exactly speedy chip. The 4GB of RAM that compliments it is a good choice, and for general browsing, productivity, and watching YouTube videos there’s nothing to complain about here. 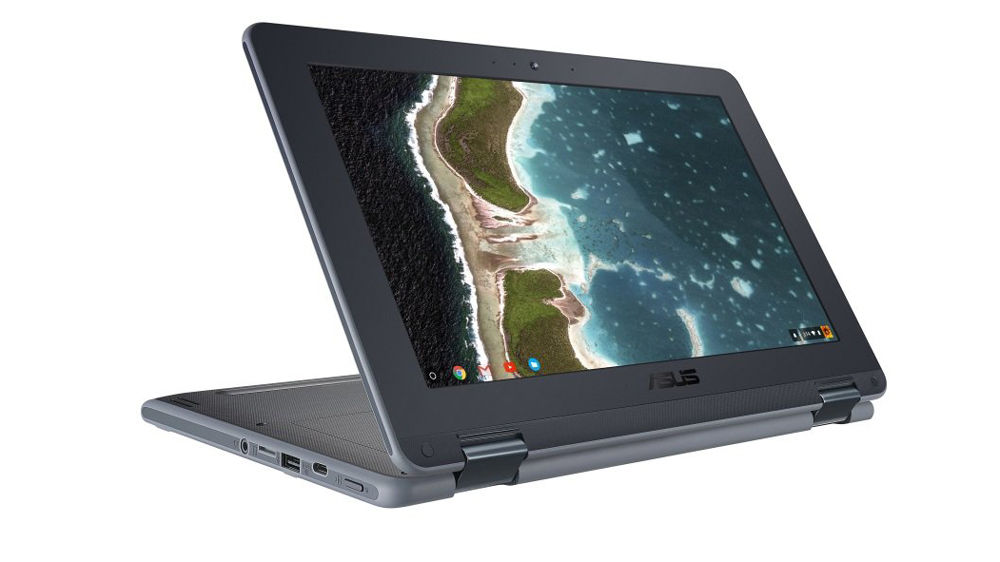 Running several tabs open at once, with a video playing in one, and some image heavy websites in others, does slow things a tad, but not to the point where it’s a huge problem.

Putting the C213 through a couple of benchmark tests returned a 53.2 score on Jetstream, and 162 on Basemark 3. This ranks it above the likes of the Acer Chromebook 14, Acer R11 and the Dell 11 in terms of speed.

Battery life is also strong, with our looped video test lasting for a little over ten hours. That’s more than enough for a good day’s work.

For those not familiar with ChromeOS, it’s much like the Chrome browser that you’ve most likely come across. It can be used with everything in tabs across the top – just like Chrome – or you can open different apps in their own windows, making it easier to tab between them.

While ChromeOS is definitely aimed squarely at the web, you can still create documents and spreadsheets offline with the Google office suite. New apps are found on the Web store, where there are sections for offline apps, ones that work with Google Drive, alongside other general offerings.

It’s a simple, easy to understand operating system, that you can give to an elderly relative or child without worrying too much about support calls every day. It’s not just for them though, as you can get a surprising amount done with a Chromebook, and as long as you’re aware that certain apps don’t work on this platform – iTunes being one regularly mentioned – then it’s a great day to day computing experience.

Google is also expanding these capabilities by allowing newer Chromebooks to run Android apps. The C213 is one of those, and we found using Adobe Lightroom, several games and the Microsoft Office suite a decent addition to the platform.

One advantage of the move to Android apps, is that Netflix subscribers can now download shows and movies to watch when travelling or offline – something not available simply on the web version. You might want to be judicious in your choices though, as the 32GB of built-on storage might fill up quickly if you get carried away.

Android compatibility is still in the early stages though, with Google stating it remains in Beta, so quite a few apps are not yet optimised for the desktop format. If this can be fixed soon, then Chromebooks will become an even more compelling option for consumers.