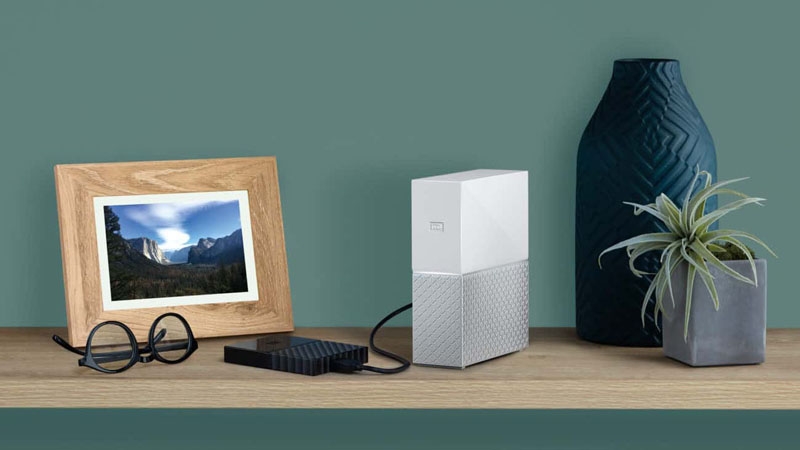 The design and styling of the hardware in the My Cloud Home is top-notch, with all its issues lying in the software components provided for it. The underlying platform is a solid one for which WD hardware engineers should be proud, and the software team needs to better support.  The My Cloud Home can provide DLNA storage to access with a smart TV or a personal cloud solution, but those that want more should consider Synology, QNAP or the higher-end WD My Cloud products.

People are rightly nervous about cloud storage. Services can be hacked, or accounts deleted, leaving the user waving goodbye to numerous irreplaceable files.

The ideal solution is to have a cloud copy of their files with all the advantages of access and sharing, but also to have a personal cloud that you can control.

The WD My Cloud Home is exactly that: a personal cloud you can keep at home, use as a multimedia NAS box and synchronise with cloud-stored data.

We reviewed the 3TB version of the My Cloud Home, though Western Digital makes My Cloud Home boxes that range from 2 to 16TB in capacity. The maximum single-drive unit is 8TB, while those higher in capacity use two drives.

Regarding the best value, the relative cost per terabyte decreases as you increase the capacity, so 2TB offers the least value for money, and 8TB the most.

Subtracting bare drive costs, the enclosure overhead is least with the 4TB version and greatest on the 3TB and 8TB options.

The dual-drive ‘Duo’ models follow the same pattern, with the 16TB offering the best value, and they also have the added twist that with dual-drives they can be configured in mirror mode for extra redundancy.

That feature, and the ability to replace drives, make the Duo models more desirable. 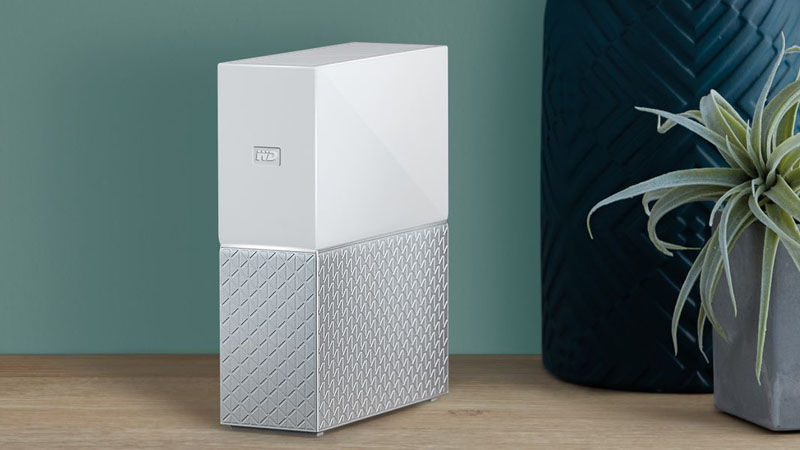 The My Cloud Home is the latest in a series of devices that began with My Book devices that connected to a PC or Mac over USB, and has since evolved into fully network-attached storage.

Thankfully, in a recent revamp the ‘book’ analogy has been dropped, and if anything these new products look more like document-storage boxes with their two-tone styling.

As elegant as the new look is, the enclosure is a plastic tube with a vented top and bottom for airflow. Inside Western Digital has mounted one of its NAS drives and sufficient ARM SoC technology to drive the hardware with a custom Linux distro.

On the back of the device is a single 100/1000 Ethernet plus a USB 3.0 port, and the power inlet for the small wall-socket-mounted PSU that comes in the box with it. 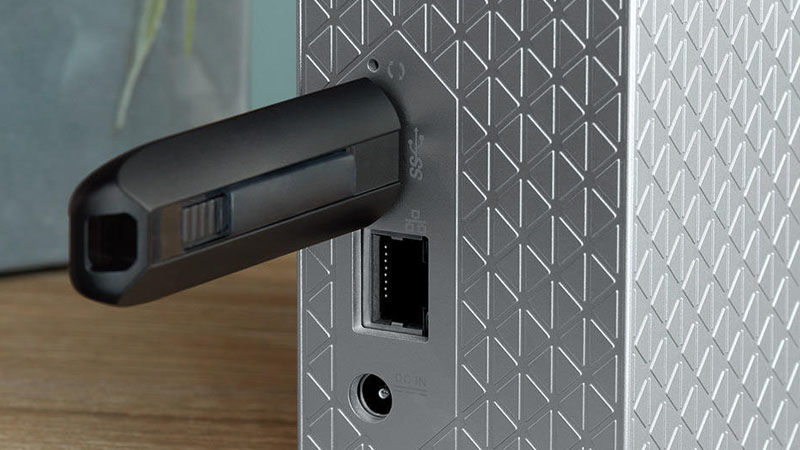 There’s no power on/off button, and the only indication of activity is a strip LED visible across the middle of the front face.

For those who are wondering, access isn’t provided into the WD My Cloud Home single-drive system. So if the drive inside fails there is no easy way to swap it out.

That’s not true of the dual-drive Duo models, which have a removable lid that allows you to replace any malfunctioning drives. 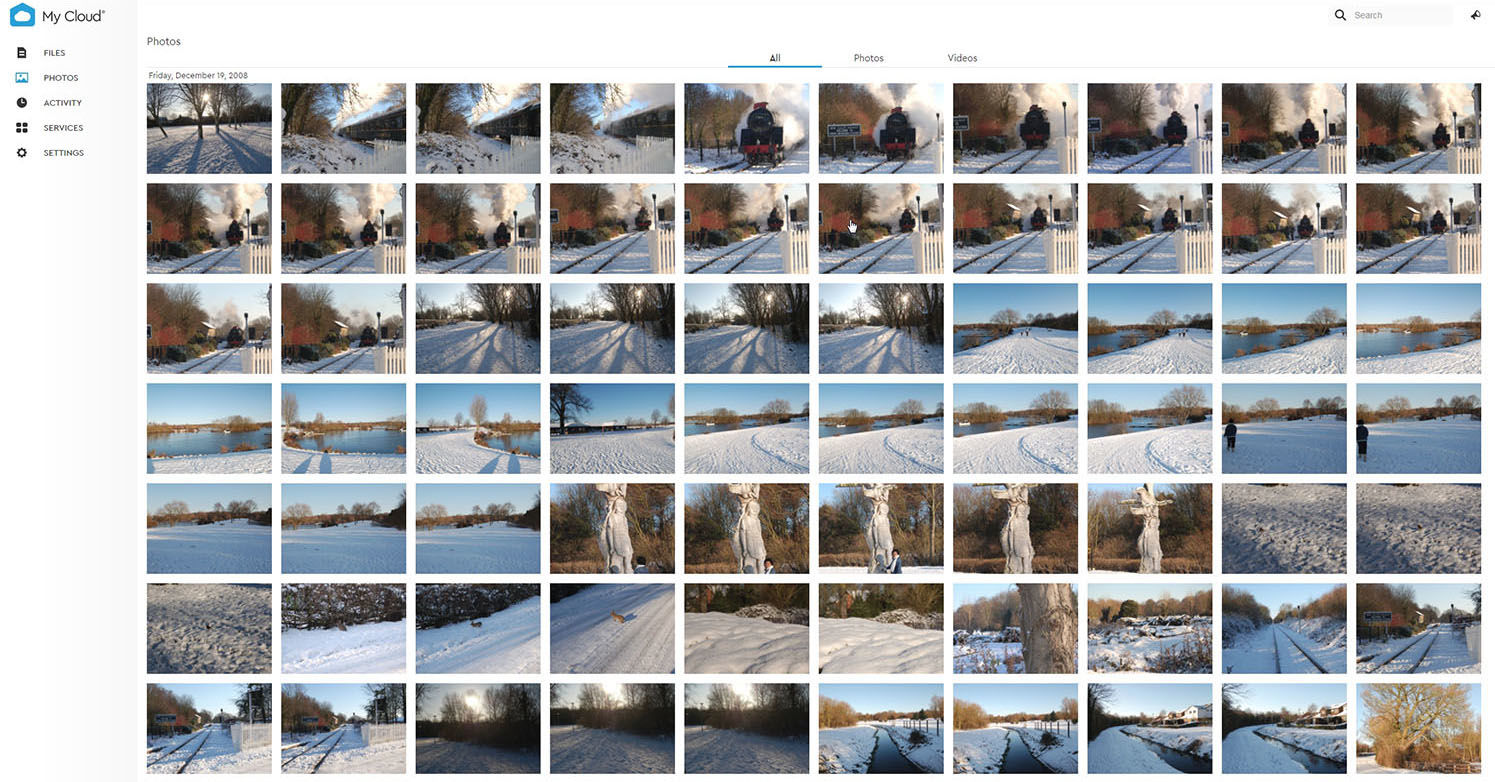 For those who have previously owned a NAS box, the approach taken by Western Digital on the My Cloud Home isn’t one that will be familiar.

Instead of the usual web interface on the device, all control is via a website that relays any changes you make to the local hardware. That difference might seem insignificant, but it does make configuration during an internet outage impossible.

The advantage of this method is that from home.mycloud.com you can remotely access any files on the system, add users, browse photos and activate a limited set of services.

Of these, the most critical for many users will be the Plex functionality that allows any local DLNA client devices to find your files. At least it does if you place them inside the Plex sub-folder on the My Cloud Home Public hierarchy.

The problem with Plex is that for more than one person to access the contents using the Plex client app it requires a monthly, yearly or lifetime subscription.

However, there are some alternatives to using it at the client end, and Western Digital even has Android and iOS tools that bypass the DLNA functionality and allow you to navigate the contents on the My Cloud Home.

Confusingly for new customers, these aren’t the applications that are labelled ‘WD My Cloud’ on the app store, because this hardware has its own ‘WD My Cloud Home’ tools. Those trying to log into the standard My Cloud apps will find the login and password will be rejected.

The software side of this deal is its weak point. Not wanting to rob sales from its higher My Cloud line, Western Digital has reduced the functionality of its Home products. But the separation hasn’t been well considered, and the Home mobile apps lack the key functionality that anyone buying this device would expect. 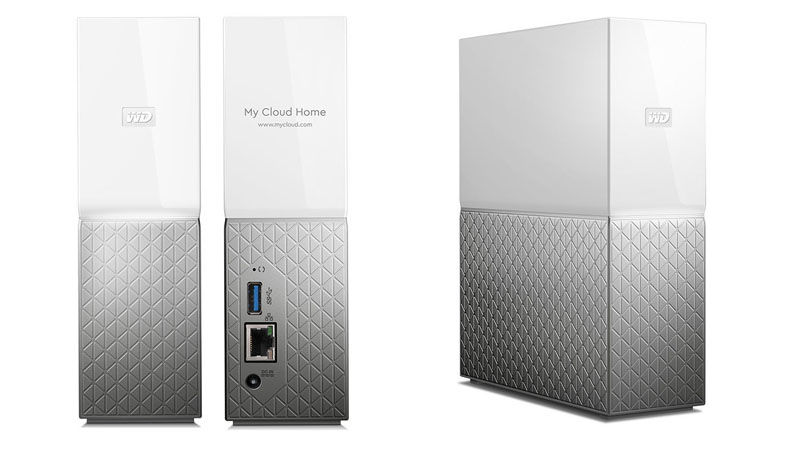 Imagine a scenario in which you’ve moved your music collection to the My Cloud Home, and wish to play it back on your Android phone. A simple enough task, surely?

In the My Cloud Home app you navigate the folder structure and find an MP3 file (with a music icon) and click on it, expecting it to download to the mobile device and play. Instead it asks you what you’d like to Open it in, and when you go to choose the app it presents all the options for sharing files, not playing them.

The irony of this is that once you’ve activated the Plex DLNA feature on the My Cloud Home you can then install any free DLNA client app on your phone or tablet and get this functionality working easily. But that solution assumes you’re prepared to ignore Western Digital’s instructions entirely.

Other bits of the My Cloud Home solution work better than this, thankfully.

For general PC use, the WD Discovery app will splice the shared folder to the computer as a network drive relatively painlessly.

You can also create a folder and generate a hyperlink for that location using the web interface that you can send to anyone via email or chat, allowing them access to the contents remotely.

WD has also implemented a Social and Cloud import system linking Dropbox, Google Drive, OneDrive, Box, Facebook or Google Photos accounts and synchronises them with the My Cloud Home each in a separate folder.

The sync folders have odd names by default, and sync is slow in realising that new files have been added online, but eventually online content is replicated to the local storage system. Files added to the My Cloud Home aren’t then copied out to the cloud, so ‘sync’ is one directional.

Apple macOS users get their stalwart Time Machine, so they should be happy with that.

For the technologically astute the My Cloud Home isn’t a challenge to decipher, but for the less able frustration isn’t lurking far behind its outwardly friendly demeanour.

Given the high specifications, we were expecting this device to perform better than it initially did in our tests. Typical reads speed are in the 55-60MB/s range over a gigabit link, with write performance at a disappointing 25-32MB/s.

How WD managed to misplace more than 50 percent of its drive performance is unclear, but what is apparent is how the system is biased to larger file sizes. Bombarding the My Cloud Home with hundreds of small files we found write speeds reduced to sub-1MB/s levels.

Curiously, removing the official WD Discovery app and directly linking to the share using the machine IP revealed a whole new dimension to the My Cloud Home – one in which write speeds cruise at 88- to 90MB/s and read speeds can hit 95-100MB/s.

Another oddity is that the USB port works for copying files from external storage devices to the internal drive, yet WD decided not to enable it as a means to back up the device.  Given that there is only one drive inside this seems a foolish omission.

Overall, once configured and manually linked the My Cloud Home performs well, and better than Seagate’s equivalent hardware.