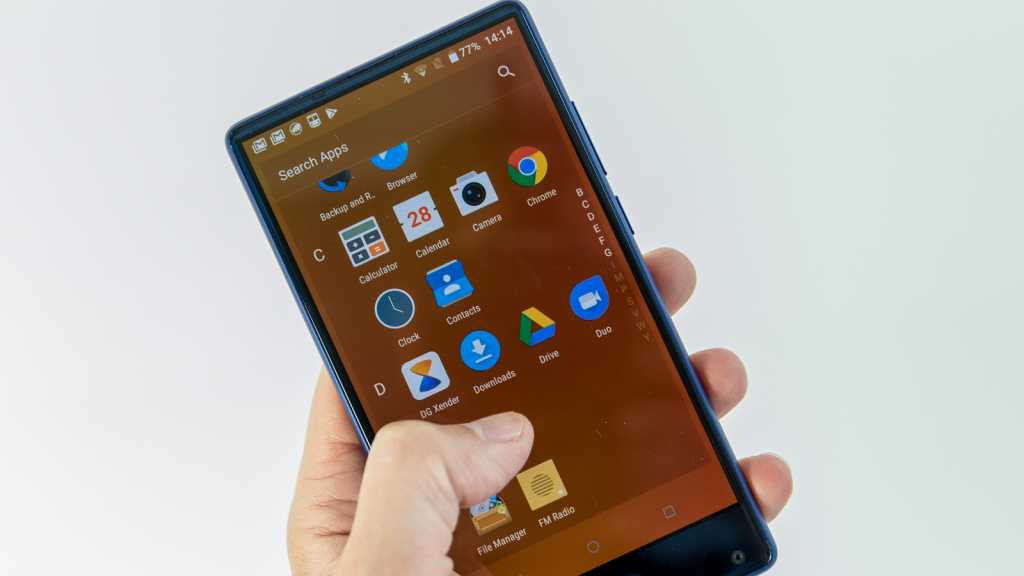 There’s plenty to like about the Doogee Mix. The display, while only 720p, is bright, colourful and detailed, plus the slim bezels make it seem bigger than the actual 5.5in size. An unfettered Android experience is welcome, and the battery life means you’ll make it through the day without a problem. Cameras are a bit hit and miss, but you get get good results if there’s plenty of light. Although, those wanting a gaming device will find the hardware can’t quite cope with anything too demanding. For around £200 you’re getting an attractive, highly usable device, that stands out from the crowd. Not bad at all.

Doogee might not be a brand that instantly sparks recognition (or if it does it’s about a TV show starring a very young doctor), but this Chinese manufacturer has much to offer those looking for an inexpensive Android phone.

The Mix is it’s latest creation, and ticks many of the important boxes for potential buyers. But, what compromises do you have to make for a sub-£200 device? We take a look.

For a wider choice of import-worthy devices take a look at our Best Chinese phones chart.

As Doogee doesn’t have a direct retail presence here in the UK, you’ll need to import one from an online retailer like Gearbest. While this is perfectly fine, and something that UK buyers are increasingly doing, you will want to weigh up the pros and cons of doing so before you spend any money.

The model we’re reviewing is currently available on Gearbest for £141.54, although you’ll need to add import duty on to that for your final price.This is calculated at 20 percent of the value on the shipping paperwork, plus an admin fee of around £11.

The first impressions made by the Doogee Mix when you take it out of the box are positive. A metal chassis with glass front and back, lends the device a premium feel, and this is matched by a sturdy 193g weight which certainly feels substantial in the hand.

Most of the front panel is taken up by the 5.5in display, with only a lower bezel interrupting the glass. Here you’ll find a fingerprint sensor that also doubles as a capacitive button for some functions. We found this to be fast and very reliable at unlocking the phone, which isn’t something we always say.

Then there’s the curiously positioned selfie camera, which occupies the bottom right corner of the bezel mimicking the Xiaomi Mi Mix. When launched, the camera presents a message that you should turn the unit upside down to take a picture. This does seem a bit absurd.

On the right flank there’s the power button and volume controls, while the opposite side is home to a dual-SIM card slot with the secondary place also supporting microSD cards up to 128GB. The bottom of the unit houses twin speakers and a Micro-USB charging port. We’d like to have seen USB-C here, as that is now the norm, but we realise that a few corners have to be cut when you’re working in this price range.

One inclusion that we’re happy about though is 3.5mm headphone jack. Glad to see that Chinese manufacturers didn’t get the memo about the stupid decision to remove it from modern devices. It’s just a shame that Google did on one of our favourite Android phones – the Pixel 2.

Turning the Doogee Mix over reveals dual cameras on the back, which is a nice touch for a device under £200.

Closer inspection of the handset does show up a few clues that construction standards might not be as high as you’d hope. The physical buttons on the side are a little loose, and the dual-SIM tray doesn’t sit flush when you put the card in. But neither are deal-breakers.

Doogee has included a 5.5in AMOLED display on the Mix, which looks bright and spacious. The thin edge bezels might not be the curved variety that make the Samsung Galaxy S8 so attractive, but they do give the Mix something approaching an edge-to-edge display.

The blot on this landscape is that the panel itself is only capable of a 1280 x 720 HD resolution. In general use this isn’t a big deal, and to be fair we found the display to be very pleasant, but if you want to use the phone for VR or demand full-HD on your devices, then the Mix is going to come up a bit short.

We think that would be a shame though, as the colour range, bright display, and clear text representation is perfectly acceptable on a device of this type. The lower amount of pixels to push should also grant a boost to battery life and performance over higher specced rivals at this price point.

This makes the Mix a pretty nippy device, with only the occasional pause when launching apps. Of course, it’s still a budget phone, so you won’t be able to do anything that requires heavy lifting – graphically demanding 3D gaming for instance – without a noticeable drop in performance.

From a full charge in the morning, and with a mixture of Wi-Fi surfing, listening to music, WhatsApp messaging, and a few YouTube videos, we were happy to see around 30 percent of battery life still remaining by late evening. This kind of stamina proved consistent, so if you want an all-day phone then the Mix should do the job.

The dual cameras are 16Mp and 8Mp units, which can give a x2 zoom. Results varied quite a bit, with occasionally a nice photo appearing, but for the most part shots were acceptable rather than impressive.

There are a few fun settings, such as one that adds make-up, another that blurs backgrounds in a Bokeh fashion, and even a Pro mode that offers a wide range of control over exposure, ISO speed, and colour temperature. But, you have to work hard to get a great shot.

Again, it’s fine for social media snaps, but you’ll want a better unit for important photos you intend to keep.

Video capture is decent, but you’ll want to hold the camera very still to avoid shaky footage. If you do you’ll be rewarded with up to 1080p at 30fps.

Doogee has included Android 7.0 Nougat as the default OS for the Mix. There is the obligatory skin running on top – Doogee OS V2.0 – but it’s lightweight and for the most part feels like pure Android.

The only real clues are a newsfeed app that appears when you swipe right on the Home screen, and a cat in a teacup that dangles from the top of the display. The latter is only on the Home screen and is a quick link to the Doogee themes store. We thought it would be annoying, but actually found it quite fun as it doesn’t interfere with operating the phone.

You’ll also find various settings available that expand the personalisation of button placements, quick links, that sort of thing, but all can be turned off. It’s a nice, clean version of Android.