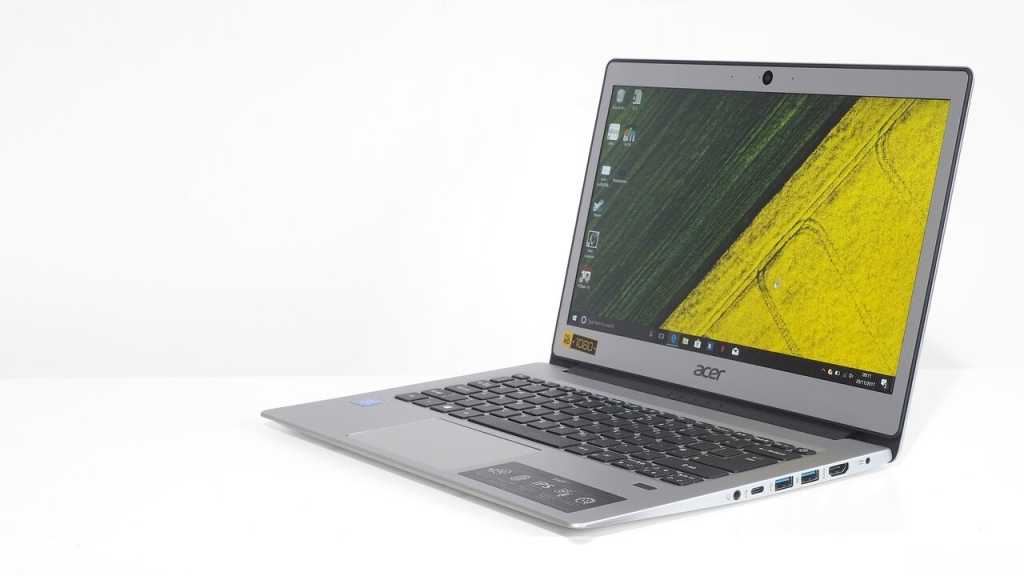 The Acer Swift 1 is perhaps the most expensive-looking and feeling laptop Windows 10 laptop you can get for around £350. A metal shell, solid keyboard and trackpad, and a 13.3in Full HD IPS screen are all to be celebrated. There’s only one worry: performance. While the Pentium processor used here is significantly better than that of previous generations, it’s a low-end chipset that will make more demanding tasks seem a real chore. However, for light use — emails, browsing, some casual gaming — the Swift 1 performs fine. It’s also a great choice for humanities students, as the sort of essay-making machine you can comfortably carry around all day, every day.

The Acer Swift 1 is one of the cheapest laptop you can buy that looks a little like a MacBook. It’s slim, and has a metal frame with plenty of bright aluminium on show.

Where MacBooks start at £949 for the arguably out of date Air 13, the Swift 1 costs £349 in the variant we’re using. Let that sink in: just over a third the price of Apple’s cheapest alternative.

Low CPU power and minimal storage make the Acer Swift 1 suitable for only light jobs like writing documents, surfing the web and streaming video. However, given the price its impersonation of a £700-1000 slim and light laptop is almost bizarrely convincing.

Price is paramount for the Acer Swift 1. In the UK at least, the most common spec is the one we’re reviewing. It costs £329 for an Intel Pentium CPU, 4GB RAM and 64GB storage.

They’re the sort of specs you might normally see attached to a tablet. But so is the price.

A £250 hike may seem steep, but in the jump up to an i3 CPU, the Swift 1 becomes a very different laptop on the inside.

The Acer Swift 1 comes with a standard one year carry-in warranty.

If a laptop costs £350 or less, we normally expect to see a somewhat thick plastic shell. The aim should be a solid, practical laptop, not a flashy one, right?

The Acer Swift 1 is nothing like that. It’s affordable, but still has a full aluminium shell. Its lid, the keyboard surround and the underside all use plates of real aluminium. This is the sort of look that makes you expect a £650-plus price tag, not a £350 one.

Acer has a history of providing that expensive aluminium look and feel at a low price, having used the same tactic (and a similar shell) in its 13in Chromebook.

For the price, the Swift 1 looks and feels lovely, and there’s no obvious sign Acer has done the job on the cheap. The panels don’t flex like cardboard at the first sign of pressure and the aluminium has an anodised finish just like several of the popular expensive alternatives. It’s a brighter, shinier finish than some, but still looks great.

Let’s not just gush, though. There are a few signs the Swift 1 isn’t really an expensive 2017 laptop. The screen has a black border around it, which isn’t the prettiest look. And the display surround is that of a classic laptop. Many new models (including some cheaper ones) only have a few millimetres of redundant border around them. This one has — shock, horror — about an inch to the left and right.

Its thickness and weight let it easily slide into the “thin and light” category, though. The Swift 1 weighs 1.3kg and is just under 15mm thick.

The Swift 1 also has all the main connections we like to see in a laptop, including some you’ll miss by choosing a much more expensive model.

There are two USB 3.0s — great for the price — and one USB 2.0. A USB-C port complements these, although it’s predictably only specced to the 3.1 standard, not the much faster Thunderbolt 3.0. We’d be frankly confused if it did: you don’t tend to get Thunderbolt in cheap laptops.

A full-size HDMI and full-size SD card slot finish off what is a connections array fit for a much more powerful laptop than the Swift 1.

There are also no nasty surprises in the keyboard and trackpad either. Some super-affordable laptops have keys that feel cheap, often with hollow-feeling feedback or too much wobble. There’s none of this in the Swift 1.

This is a rock-solid semi-shallow chiclet design. Buying this entry-level spec version of the Swift 1, you actually benefit from the fact there are significantly pricier models with the same shell and keyboard. Acer couldn’t afford to cheap out too much.

Saying that, Acer also uses some great keyboards on its bargain basement Chromebooks. It knows how to make a good, cheap computer.

We used the Swift 1 as our main work computer for a while, and came across no issues.

There is, and this came as no surprise, no keyboard backlight. While some surprisingly affordable laptops have backlit keyboards, we don’t expect one in a £350 laptop that already has budget siphoned off to accommodate an aluminium shell.

The trackpad is similar: not high-end but great for the price. Its surface is plastic rather than textured glass, but then some laptops twice the price still use plastic.

Swipes are relatively smooth and the click action is solid. It’s not too stiff, not too deep, not too loud and not broken. As in so many other aspects, the Swift 1 trackpad doesn’t seem like a melted Madame Tussauds mock-up even when stacked up against “real deal” £1000 laptops.

Acer has — although we’re not entirely sure why — also crammed in a fingerprint scanner to the right of the trackpad. This is a little mad in a £350 laptop. It’s a little fiddly compared to that of high-end laptops, but does let you login with your finger as promised. It just may take a couple of attempts.

If the scanner is a case of Acer showing off unnecessarily, the screen is the sort of grandstanding we’re a sucker for. The Swift 1 may be cheap, but it still packs in a perfectly respectable 1080p IPS LCD display, one 13.3in across.

At first it might seem the 1080p part is most important, but in fact, IPS is. Plenty of cheap laptops still use TN screens that look bad from even a slight angle, while even an entry-level IPS panel like this looks good from almost any angle.

Not every aspect of the Swift 1 is amazing, of course. Colour is visibly a little undersaturated, covering just 61.2% of the sRGB colour gamut. Tones don’t pop off the screen as they might in a £350 tablet, but this is undoubtedly among the best laptop displays at the price.

Solid contrast of 985:1 also helps makes the most of this colour capability. For a £350 laptop, the Swift 1’s screen looks alarmingly good to us.

It’s a matt screen too, which is better if you’re going to use the Swift 1 out in daylight, or on a train with light streaming right through a window onto your Excel spreadsheet. However, brightness is only just good enough to reach an acceptable level for any sort of outdoor use.

The Swift 1’s max brightness is 266cd/m². You’l really want to see 350cd/m² or above for best results on a sunny day. But just by saying that we’re (once again) comparing the Swift 1 to laptops twice the price.

This isn’t a touchscreen, but the display does fold back almost 180 degrees, rather than the usual 130. It’s not useful in that many situations, but does make sharing what’s on-screen easier.

If you’re waiting for the reason why the Swift 1 is so cheap when we keep comparing it to models “twice the price”, the best answer is the CPU. Our version of the laptop has an Intel Pentium N4200 processor.

This is a quad-core CPU with a clock speed of 1.1GHz and a “burst” of 2.5GHz. However, compared to Core series processors, even the Core i3, this is a bit of a weakling.

Using the Swift 1 as we would any other laptop, we found installing and loading apps took significantly longer than with a Core-powered system. And any intense applications like video editing or high-level 3D gaming are off the cards.

However, with this generation of Pentium CPU, we’re finally past what has put off recommending most budget Windows laptops in recent years. Until this gen, Atom and Pentium-powered laptops could be borderline painful to use at times even with light duties.

The Swift 1 and its Pentium N4200 feel just fine, with minimal lag when you’re just coasting across the surface of Windows 10 and, say, using the browser or WordPad. This is the level at which the laptop is comfortable. But it’s important as it wrestles away some of the appeal of “premium” Chromebooks, which we’ve often recommended over rock-bottom laptops.

You’ll need a little patience, but not anything like some older entry-level laptops require.

There’s a more telling comparison, though. The Intel Pentium 4450U Lenovo used in its IdeaPad 320S scores 2295, making it much more like a lower-power alternative to a Core-series computer. Of course, the 320S is more expensive, made of plastic and has a much, much worse screen. Comparing the two on performance is just one side of the story.

Gaming performance is poor, again worse than the IdeaPad 320S, but no worse than we expect from a Pentium CPU, which has a low-end Intel HD 505 GPU. Alien: Isolation runs at an average 9.8fps at 720p, minimum graphics. At 1080p with the settings maxed you’re looking at 3.3fps. We’re miles away from playable speeds.

We couldn’t even try our usual Deus Ex: Mankind Divided as there’s no enough room on the Swift 1’s paltry 64GB solid state storage. But we’d be looking at single figure frame rates no matter the setting.

Gaming is not a total bust, though. The Swift 1 can play Skyrim at 720p resolution, Low settings reasonably well.

One benefit of using such a low-end CPU is the Swift 1 doesn’t need fans. It uses passive cooling, like a tablet. It’ll be silent (or near silent) no matter what you do. Putting an ear up to the ports, we can hear a slight almost HDD-like noise from the Swift’s insides. It’s likely to be noise from the power supply or another component. Your Swift 1 may not suffer from it, and in ours it’s only audible if you go listening for it.

A CPU that barely uses any power makes you expect a battery that lasts forever. Acer says the 42Wh battery lasts 10 hours, but in our experience it’s not quite as long-lasting.

Playing a 90-minute video on loop at 120cd/m brightness, the Swift 1 lasts 7 hours 49 minutes. While not a mind-blowing result, it’s very close to what we tend to look for: a full day of work.

The speakers too are sufficient, but not special. While clear and largely non-distorted at higher output, they don’t have the volume, mid-range bulk or bass of the best laptop speakers.