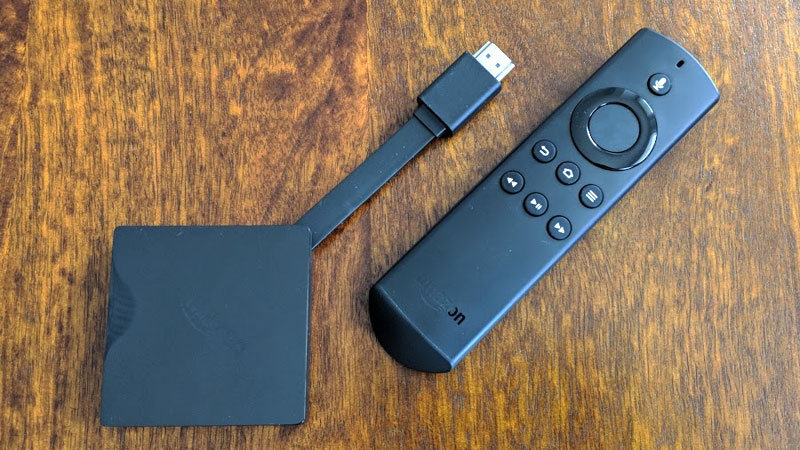 If you are an avid Amazon Prime subscriber then it makes sense to go for the Fire TV for ease of integration and 4K access to Amazon Prime films and TV. It also offers full Netflix support and access to a plethora of apps and channels at less than half the cost of the Apple TV 4K – though that product has an Ethernet port for a potentially more stable streaming experience, unlike the Amazon Fire TV that relies on Wi-Fi.  Just be aware that at the moment, there aren’t actually that many 4K HDR films or TV shows out there, on any streaming service. When the Fire TV works to its full potential it’s great, but for now it might be overkill for your needs. It’s only worth it if you’re a Prime subscriber, or intend to become one after purchase.

New in 2017, the Amazon Fire TV replaced the company’s older set top box of the same name. But with a new diamond-shaped design it is not the same as the Fire TV ‘Stick’. It brings 4K capabilities and Alexa support to a product it hopes can compete with Google’s Chromecast and, to an extent, the Apple TV.

The Fire TV costs costs £69.99 compared to  the regular Stick at £39.99, but you gain 4K HDR support for the extra money. Whether or not this is worth it depends if you care about the improved definition and if you have a compatible TV.

The Fire TV is now quite similar in design to the Fire TV Stick, as a hanging HDMI plug-in rather than a set-top box. It plugs into an HDMI port but also requires the included USB power brick and cable to function.

It’s a design that will hide neatly on the side or rear of your TV much like a Google Chromecast, but if you don’t like lots of wires then it might be off putting and you might prefer the look of the Apple TV.

The Fire TV can only support HDR10, and it becomes a bit complicated working out if your TV is totally compatible. HDR10 is the industry standard for HDR )High Dynamic Range) in modern TVs. Chances are if you have a new 4K TV then it will be HDR10 compatible, but make sure to check before you buy the Fire TV.

The latest batch of high end TVs support the Dolby standard called Dolby Vision HDR. The Fire TV won’t work with this standard, but for all but the pickiest TV buffs, you’ll be just fine with HDR10 streaming.

We tested the Fire TV on our own 55in Hisense 4K HDR TV at home over a fibre broadband connection. This is also worth noting; the Fire TV does not have an Ethernet port, so even if you have a 4K TV, you’ll have to rely on a strong Wi-Fi connection to get a full quality stream.

Shows look absolutely incredible and we experienced no lag or stutter in the stream or the UI, which is intuitive and smooth but not dissimilar to rival products.

We tested Amazon Prime, Netflix, BBC iPlayer and more in our time with the Fire TV and Amazon and Netflix in particular make it easy to view content in the highest definition promised by the product. We were even prompted to upgrade our Netflix account to the compatible subscription package.

Just be aware that the Fire TV does not make upgrade all content to 4K, but instead is capable of streaming compatible content to its highest possible quality, unlike the cheaper Fire TV Stick which can only stream in standard definition.

As well as the Fire TV’s Alexa remote, you can use Alexa on your Amazon Echo to control your Fire TV, completely hands-free.

If you have only one Fire TV, just ask Alexa something involving the Fire TV, such as “Alexa, find action movies on my Fire TV”. As long as they’re connected to the same network, the two devices should pair automatically and you can begin to tell Alexa to play specific shows, play the next episode, fast-forward and more.

Also of annoyance is Amazon’s ongoing spat with Google, which has seen each block content from the other’s hardware. This means there is no YouTube (Google-owned) app on the Fire TV anymore. It could return if the companies can come to an agreement, but don’t bank on it.

This is extremely annoying, as it means it’s just about the only media streamer which does not offer YouTube on your TV. Amazon has directed owners to install a web browser and use YouTube.com, but this is a clunky workaround which is less than satisfactory.

If you were to buy a Google Chromecast instead, you wouldn’t be able to watch Amazon Prime Video, so you’ll have to pick sides here, which is a pain. (Incidentally the Apple TV now offers the best of all worlds with YouTube and Prime Video, and plenty of UK catch-up TV.)

If you’re a Prime subscriber with a 4K TV, then this latest Fire TV is the one for you. As long as you are sure to plug the thing into a ‘4K UHD @ 60fps’ port on your TV (check before you buy that your TV has one) then you will have no problem with the Fire TV. But if you have £69 to spend it’s worth considering the  Google Chromecast Ultra which is the same price but allows wireless streaming direct from your laptop, tablet and phone, a feature the Fire TV lacks.

The Fire TV also has the Alexa integration in the remote, but we found it didn’t really make navigation quicker. Saying ‘find comedy’ expecting Netflix to show us the genre, we instead were prompted to pay £3.49 to rent The King of Comedy from Amazon. Great film, but no thanks Alexa.

Amazon also promises further integration with Fire apps, like the ability to use the remote to order a takeaway. The technology, and trust in it, is just not there yet though – we can’t see anyone using a Fire TV remote to order a curry anytime soon.