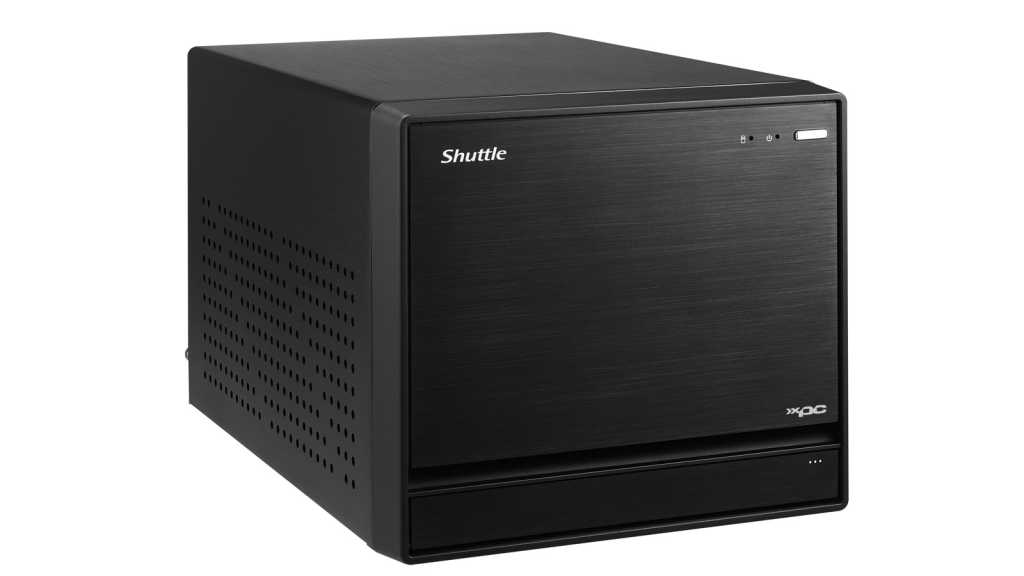 The Shuttle SZ270R8 delivers full-size gaming performance in a compact and discreet case you can put anywhere, yet remains surprisingly upgradable. It delivers competent all-round performance, but can’t use Intel’s latest processors.

Shuttle has been making tiny desktop PC barebones systems for years. You simply add a processor, memory, a hard drive and a graphics card, if you need to. But while you can still do this, you can also buy a fully built system from iCubes in the UK.

As reviewed, the Shuttle SZ270 R8 Mini PC costs £1,579.25 from iCubes.  Alternatively, you can configure it on iCubes’ website with a variety of processors ranging from a Celeron G3950 up to a Core i7 7700K. There are also many storage options, allowing for up to four drives including NVMe support. You can also buy the barebone PC on its own for £320.72 and build a system with your own components.

Interestingly the price changes depending on how soon you want to receive your PC. The default option will see it built in seven to ten working days, but you can reduce this to five working days for an additional £37.52 or three working days for £56.29 extra.

Unlike the majority of desktop PCs constructed from carefully selected off-the-shelf components from any number of manufacturers, this mini PC is built around Shuttle’s XPC Cube Barebone system SZ270R8.

This comprises a 14.2 litre case containing a pre-installed motherboard, cooling system and power supply to which a processor, RAM, storage and other components can then be added. It’s around one-third the size of a typical gaming PC.

As its name suggests, the case is roughly cubic in form and has a minimalist design featuring a black brushed aluminium exterior with just a small silver power switch and a pair of tiny indicator LEDs on show. There are no external drive bays present, so you won’t be installing a DVD or Blu-ray drive in this PC.

A pair of front-facing USB 3.0 ports is concealed behind a small hinged flap alongside a pair of analogue audio jacks.

Other than the flap, which looks and feels rather cheap when opened, the PC looks smart and solidly built. Perhaps unusually for a gaming PC, there has been no attempt to festoon it with coloured lighting or transparent side panels. This box is designed to blend in, not to stand out – a design decision which makes it ideal for placing next to your TV as part of an entertainment system without it becoming an unwelcome distraction.

All remaining ports are at the rear where four more each of USB 3.0 and USB 2.0 ports can be found (sadly there’s no USB 3.1) along with a pair of Gigabit LAN connectors and three more audio sockets. 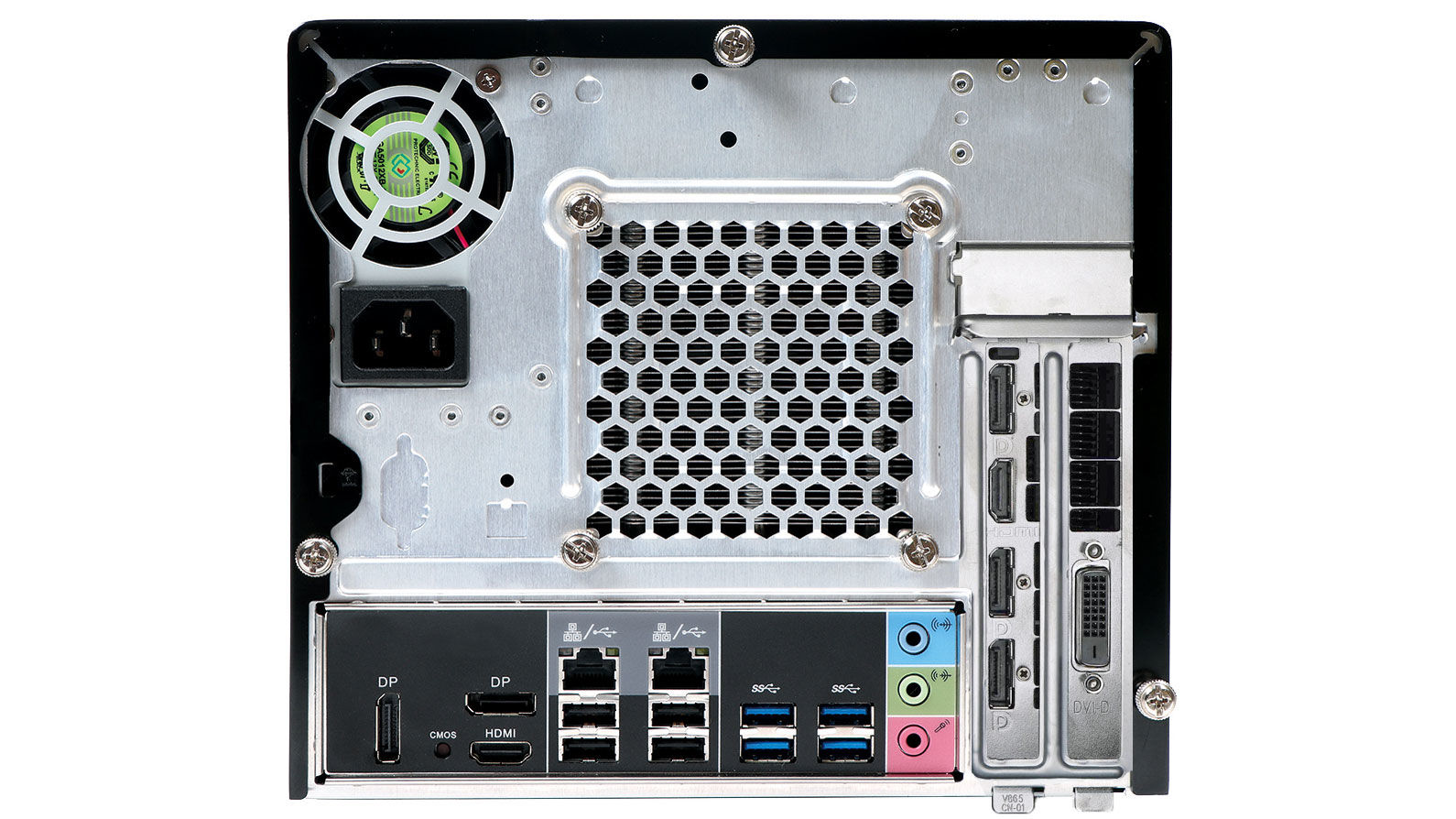 Access to the case internals is via three thumbscrews which must be removed before sliding off the lid from front to back.

Inside you’ll find everything packed in quite tightly but elegantly. Surprisingly, there’s enough room in the case for up to four 3.5in hard drives or even eight 2.5in drives if you install Shuttle’s optional adapters and an additional SATA card. The drive bays are easily accessible from the top, but full access to the motherboard beneath will require a little more time with a screwdriver. The system also includes a 500W power supply with an 80Plus Silver designation for improved efficiency.

A custom, integrated processor cooler comes pre-installed in the form of a heatsink and fan at the rear of the case connected by four large heatpipes which travel across the motherboard to the CPU itself.

In this configuration, an Intel Core-i5 7600 has been chosen as a sensible balance between performance, power and cooling requirements, although the motherboard will support other CPUs of either the Skylake or Kaby Lake designation.

Note that 8th-generation Intel Core CPUs aren’t supported by the Z270 chipset in this system, so you won’t be able to take advantage of their improved performance and additional cores. This is one of a few limitations you’ll have to live as some compromises are inevitable in a PC of this size. Custom hardware designs such as this will always lag a little behind when it comes to supporting the latest chipsets and components.

So, you won’t be swapping out the power supply or processor cooler with any off-the-shelf alternatives and you’ll also be limited in terms of what graphics cards you can install, because of size, power and power connector constraints. 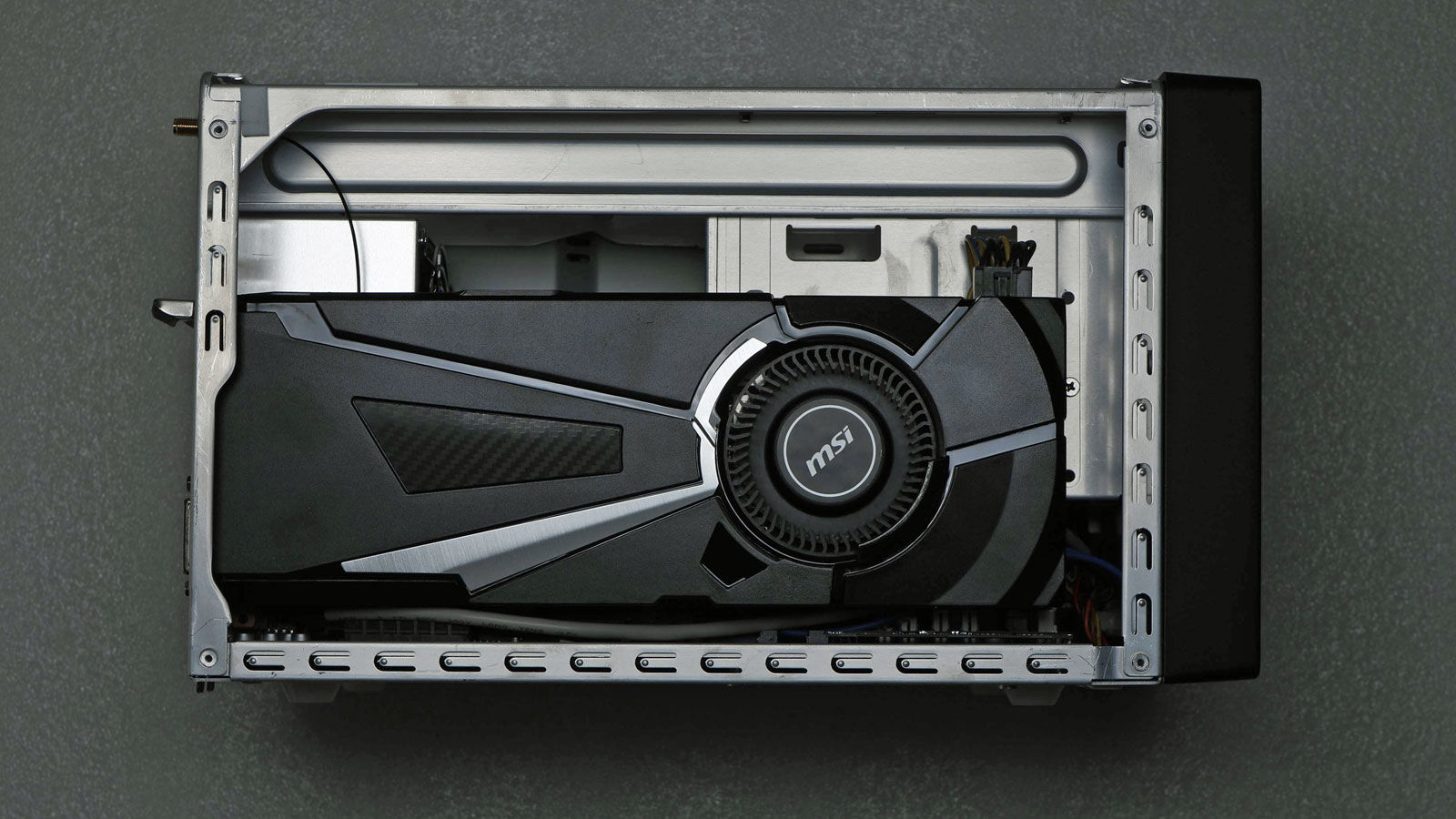 However, given its size, this Shuttle Mini PC is rather more accommodating than you might expect when it comes to graphics. The left side of the case has room enough for a double-width graphics card of up to 280mm in length, or up to 273mm with end-mounted power connectors.

It’s this design which has enabled the use of a high-performance GeForce GTX 1080, this MSI model being slightly overclocked from 1733MHz boost to 1771MHz boost. The graphics card’s fan draws air in directly from dust-protected vents in the side of the system case, so it’s important to keep this in mind when locating the PC.

Cramming high-performance components into a such a small case is no easy task, but the Shuttle SZ270R8 Mini PC performs admirably for its size with the GeForce GTX 1080 graphics card delivers excellent frame rates in a device that’s small enough to move from room to room or take to a LAN party in a backpack.

You’ll be able to maintain more than 60 frames per second playing many AAA games at 2560×1440 resolution in Ultra quality and 4K will often be possible too. If you’re planning on using the PC connected up to a TV, which is an excellent use for such a discreet system, then it will cope well with 4K gaming at 30 Hz. It’s also more than capable of VR gaming.

Our less demanding title, Alien Isolation, averaged over 82fps at 4K resolution with ‘Ultra’ settings, while the more demanding Deus Ex Mankind Divided averaged 52.6 fps with the same maxed-out quality settings. Dropping to to ‘High’ quality, pushed it up to 67.3fps.

Outside of gaming, performance is compromised somewhat by the fact that the motherboard supports only up to the 7th generation of Intel desktop processors where the new 8th generation chips can offer far greater performance for your money. This won’t have a huge effect on the majority of gaming titles, but be aware that buying into older technology is part of the compromise you’ll have to make for this compact PC.

The Core i5 7600 processor isn’t an overclockable model, so core speeds are necessarily  much lower than could be achieved from a full-sized, overclocked gaming PC. If you really need more speed, the system will optionally support overclocked CPUs, but issues of controlling heat and power are magnified in such a small system case so do exercise caution. In our test configuration, the PC remained reasonably quiet but noticeably louder than a full-size PC which bigger, slower fans designed specifically with quietness in mind.

Ultimately, though, this PC isn’t about breaking any performance records. It’s about delivering a powerful graphics card in a small package with enough processing power and general system performance to support it. This it achieves admirably.

The Shuttle SZ270R8 Mini PC is covered by iCubes’ three-year ‘Eco’ warranty. This gives you a free collect and return service for the first three months, parts cover for the first two years and labour for all three.

A premium warranty upgrade is available for an additional £61.30 which provides a collect and return service for all three years, with parts covered for the first two.