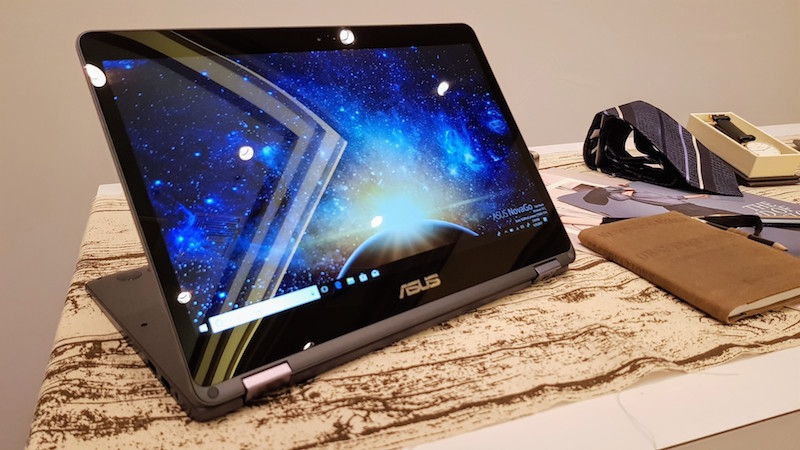 On the surface, the Asus NovaGo is just another laptop with a 360 degree hinge. However, it’s what’s hidden that’s important here. The Snapdragon 835 brings with it a data connection wherever you go and amazing battery life. At least, that’s the theory until we test it fully.

It’s been a long wait but  Windows 10 has finally landed on Snapdragon and the Asus NovaGo is the first laptop to run on the platform. Here’s our Asus NovaGO hands-on review from the Snapdragon Summit in Hawaii.

Unlike the HP Envy x2, which also runs on Snapdragon, the  Asus NovaGo has a price – in dollars anyway.

It will set you back $599 for the cheapest model with a more impressive spec priced at $799. There could well be another model in between but we’re waiting to find out.

What we don’t know for sure, is when the NovaGo will be released. An Asus representative at the Snapdragon Summit told Tech Advisor that it will arrive in Taiwan first this month with other countries later. He said to expect it in the spring or ‘late Q1’.

The NovaGo is pretty much your straight forward 360 laptop. The hinges between the screen and keyboard allow the lid to be fully rotated around so the two a back-to-back.

Generally known as a convertible, or 2-in-1, it means the laptop can be used in different modes.

There’s really nothing unusual about the design. The NovaGo looks and feels quite nice on the whole. The lid is aluminium with a nice bevelled edge while the main chassis a composite of the metal and plastic.

Typing on the keyboard feels reasonable, if a little spongy. The trackpad feels responsive and also wields a fingerprint scanner for Windows Hello authentication.

A pretty standard array of ports adorn the sides with two USB ports, headphone and HDMI. It’s disappointing, then, to see the lack of an SD card slot. It’s more like a phone with a microSD card slot that takes up to 256GB cards.

Windows on Snapdragon aims to offer thinner and lighter designs and the NovaGo is 15mm and 1.4kg which isn’t exactly anything to write home about.

The reason for most people to buy the NovaGo over a rival with a different processor, like Intel, is the features and performance offered by the  Snapdragon 835.

This is in theory for now, as this is the first laptop powered by Snapdragon we’ve seen. We’re impressed with the claims being made here but hands-on time isn’t sufficient to test them out properly.

One of the main claims is battery life with Microsoft saying you could go a week before charging with occasional usage. Asus says the NovaGo will last a whopping 22 hours of continuous video playback and 30 days on standby so we’re hoping this is true.

Another reason to get the NovaGo is because it has LTE connectivity. So you can stay connected to a mobile network wherever you go just like your phone. Not everyone will need this but for many it will be a big deal.

We haven’t been able to try this out yet and the other question is how much data plans will cost for a device like this.

Moving on and the performance of a laptop running on Snapdragon 835 is unknown. We know it can run a flagship phone smoothly but what about Windows 10.

Well it seems pretty smooth during some hands-on time but we weren’t able to push the system to see where the limits lie. Is it a genuine rival to Intel devices or more on the level of a Chromebook.

Qualcomm has already said this type of device won’t be suitable for high-end gaming but has put plenty of work into making sure things you would normally run on Windows 10 will ‘just work’. For example, Office 365 has been optimised for the platform.

The device comes with  Windows 10 S but you can upgrade to Pro for free if you like. This may well affect performance, though.

For the more regular specs, the NovaGo has a 13.3in Full HD screen that has touch input and the quality appears about right for a laptop this price. It also supports a stylus but that’s sold separately.

Along with the Snapdragon chip is 4GB of RAM and 64GB of storage unless you spend more money for up to 6- or 8GB of RAM and either 128- or 256GB storage. Models will vary in different markets.