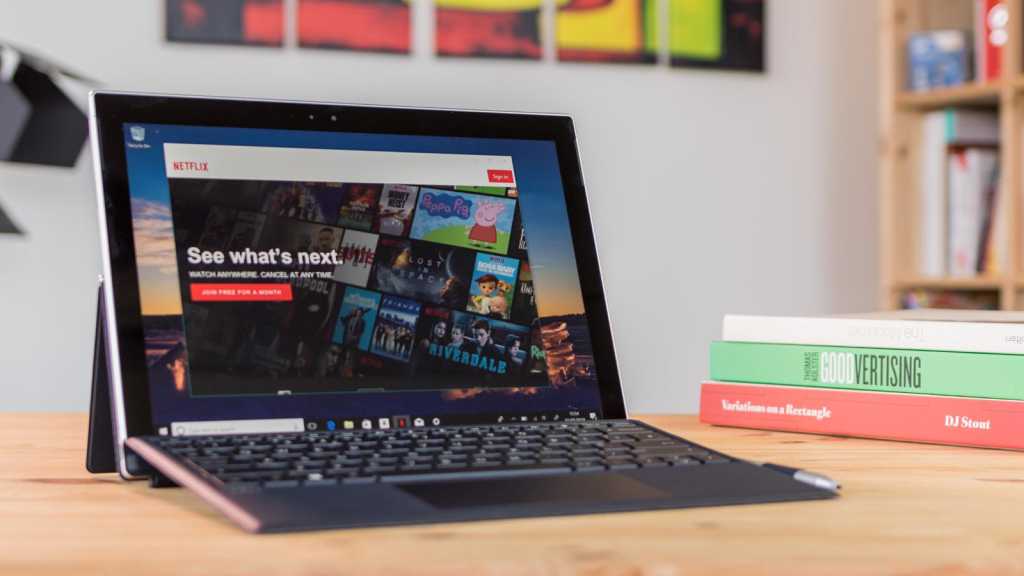 The HP Envy x2 is a sleek tablet and one of the first devices to run Windows on a Qualcomm Snapdragon chip. Starting at £999 it’s more expensive than we expected but you get the keyboard case, stylus and 4G connectivity all included. It has an excellent screen and the best battery life we’ve seen on anything at over 20 hours. However, performance isn’t great even on the more expensive model with 8GB of RAM. You’ll also need to upgrade from Windows 10 S to install software not found on the official store. If you’re looking for a Windows tablet with amazing battery life to do basic things, this will be an expensive luxury purchase. If you’re looking for a balance of battery life and productivity, the Surface Pro is a much better option.

It took some time for Windows 10 devices running on Snapdragon 835 to arrive, but they’re finally here and the Envy x2 is the first one to make its way through out test lab. here’s our in-depth review.

The alternative to Intel aims to offer amazing battery life inside a thin and light design, complete with built-in 4G connectivity.

You can buy it from Currys or directly from HP.

That’s a lot of money, even if the device does come with accessories. It somewhat defeats the point of these machines being affordable and cheaper than Windows rivals running Intel or otherwise.

One of the other three devices on Snapdragon, the  Asus NovaGo, is much cheaper at £599/$599 – albeit at a retailer we’ve not heard of before, Silicon Nerd.

You can also get the Surface Pro from last year with the Type Cover for just £619 from Amazon. If you go for a similar iPad Pro 12.9 with cellular data and the Smart Keyboard, your bill will come to over £1,000.

A Windows tablet like this might not be the right purchase for you so take a look at our best laptop chart and also the best budget laptops.

In terms of design, the Envy x2 is hardly anything new, but is a little different to the likes of the Surface Pro or even HP’s own Spectre x2.

Instead of a built-in kickstand, it’s part of the keyboard cover so it’s a sort of all-or-nothing situation. You can still use it in various different modes but it’s all a bit more fiddly and limited.

The case is faux-leather and feels like plastic but the magnetic system means the Envy x2 connects easily and securely.

The keyboard is decent enough, there’s a row of function buttons at the top but keys are little bit spongy. It’s similar to, but we prefer the Type Cover for the Surface. It’s also backlit (simply on or off) which is useful.

The trackpad is also a good size for a 12in device, it’s very wide, with a smooth feel that’s nicely responsive to touch input.

The keyboard cover hinge is excellent so you can put the screen at almost any angle. You can have the keyboard section flat or at an angle thanks to magnets. There’s also a loop on the side to store the supplied stylus.

Like the Surface Pro, it’s a slightly awkward device to use on your lap but it’s not the worst.

The good news is that the Envy x2 looks and feels great. It’s a stylish and desirable gadget. Build quality is premium with machined aluminium and that’s one of the reasons for a higher price than expected.

There are fairly thick bezels around the screen which don’t look great but this helps when holding the tablet when it’s not in the keyboard case.

One of the things having Snapdragon inside brings is the possibility for thin designs. HP has made that promise a reality with the Envy x2 thinner than a lot of flagships smartphones out there at just 6.9mm.

It’s impressive and that also means the devices is light at 680g, which is a lot lower than many laptops but that’s without the keyboard case. Add it in and the package is a more comparable 1.2kg.

The size of the tablet itself does have drawbacks, though. You’re probably used to using Windows with various gadgets and peripherals but the Envy x2 only has a single USB-C port rather than any full-size.

So this means getting additional adapters or Bluetooth accessories – not quite the ‘every port you need’ as HP suggests. A rep says some markets might get an adapter in the box, but our sample did not.

There’s a mircoSD card slot, which is handy but many would prefer a full-size SD slot – particularly photographers.

We’ve not seen a Windows device running a Qualcomm Snapdragon processor before and there are some big claims about what this means, including amazing battery life. Let’s take a look at what’s on offer with the Envy x2.

The display on offer here is 12.3in and uses a 1920×1280 resolution. The screen might have some sizable bezels around it as mentioned, but the quality of the panel itself is very good.

This IPS LED display offers great levels of details and colour. Add in the fact that it can go very bright – 460cd/m2 when over 300 is good – and you’ve got yourself a great display for all kinds of tasks.

It’s touch sensitive, of course, but also supports the HP Digital Pen stylus which is included in the box, so you can use this for navigation or for things like drawing. It’s about on a par with the Surface Pen, which is an optional accessory.

It’s what’s hidden beneath that’s perhaps more important here, as the Envy x2 doesn’t have an Intel inside as you might expect.

Instead, it’s running a Qualcomm Snapdragon 835, a processor you’d normally find in a smartphone. It’s worth noting that it’s taken a while for devices like this to arrive so there’s actually a newer model, the Snapdragon 845 available.

The entry level model come with a combination of 4GB of RAM and 128GB of storage. However, you can pay £200 more to double both. This might be wise if you can afford it, despite the inclusion of a microSD card slot.

Performance was always going to be an interesting point, not having seen Windows on an ARM chip for some time. To run some of our benchmarks, we’ve had to upgrade to Pro but the Envy x2 comes with Windows 10 S – see below for more on that.

As you can see below, the benchmark results for the Envy x2 aren’t great and we’ve been testing the more expensive model with 8GB of RAM. The Geekbench score is a long off rivals (albeit some with Core i, rather than entry-level Core m chips) and although the T-Rex graphics test is good, things quickly go down hill when things are more demanding in Manhattan.

Overall, the device is noticeably slower than rivals when doing day-to-day tasks, even rotating the screen.

A key point is connectivity, so the Qualcomm X16 modem means Gigabit LTE wherever you go.

There’s no need to plug in a USB dongle, find Wi-Fi or hotspot to your phone. This is the kind of thing you have to pay extra for on an iPad so it’s nice to have it included here. Using the Envy x2 with the same data connectivity as your phone will be a real boon for some users.

It uses a nano-SIM slot like most modern smartphones so get a SIM only deal and away you go.

As mentioned earlier, the only port on the Envy x2 is a single USB-C port so although the device is thin, this is a sacrifice. You need the port for charging and there’s no adapters included in the box either so you’re quite limited here.

The Envy x2 comes with front and rear cameras to use as you see fit. The rear camera is 13Mp, a higher resolution than most, which produces reasonable shots.

At the front is a 5Mp Wide Vision camera which is most useful for signing in using your face and Windows Hello. It works pretty well unless the lighting conditions are poor. You can also use it for video chat, of course, and the image is good as long as you’re in a well lit place.

On the audio front is a headphone jack, a trio of microphones and a pair of front facing stereo speakers by Bang & Olufsen which sound pretty good for a tablet, especially for music.

Battery life is the other headline feature here with HP touting a whopping 22 hour battery life of local video playback. That’s three hours more than the Surface Book 2 which is much bigger, heavier and has two batteries.

With 700 hours of standby, the Envy x2 is supposed to be always on like your phone. With this level of power efficiency, Microsoft says you’ll be able to use it for a week before charging – although this will be with occasional use rather than a full-on day of work.

We haven’t had it for long enough to test that standby time but it seems plausable. What we have tested is the video loop claim, as our normal test is very similar to HP’s conditions.

Our benchmark involves looping a locally stored video at 120cd/m2 (lower than HP’s brighness level) and we found the Envy x2 lasts a whopping 20 hours and four minutes. That might be two hours short of the advertised figure but it’s the best result we’ve ever seen by a long way.

So if you want a Windows device with exceptional battery life then you’ve just found it. This is the Envy x2’s strongest feature, it’s more a case of whether everything else is to your liking.

The tablet also has fast charging so you can get up to 90 percent in 90 minutes, which is quite impressive. You’ll be able to forget the charger and not panic about it.

As mentioned earlier, the Envy x2 comes pre-loaded with Windows 10 S and, like the Surface Laptop, this isn’t a very good thing.

It’s a relatively new edition of the operating system and in simple terms means you get normal Windows but you can only install apps from the official Store, rather than download and install whatever you like.

You can upgrade to Windows Pro for free if you like, it’s quick and easy but there’s a dilemma here.

Keeping on Windows 10 S will help with performance by restricting you to apps on the Store but it’s frustrating not being able to use the software you want, even Chrome instead of Microsoft’s Edge browser.

However, upgrading to Pro might mean you end up with a more laggy experience. You can load up multiple tabs in Chrome but start running other programs at the same time means everything quickly slows down – and this is when using the model with 8GB of RAM.

We wouldn’t recommend the Envy x2 if you’re thinking of upgrading to Windows 10 Pro and using any demanding pieces of software. This is a shame, but HP doesn’t make any huge claims about it being a machine you can throw anything at.