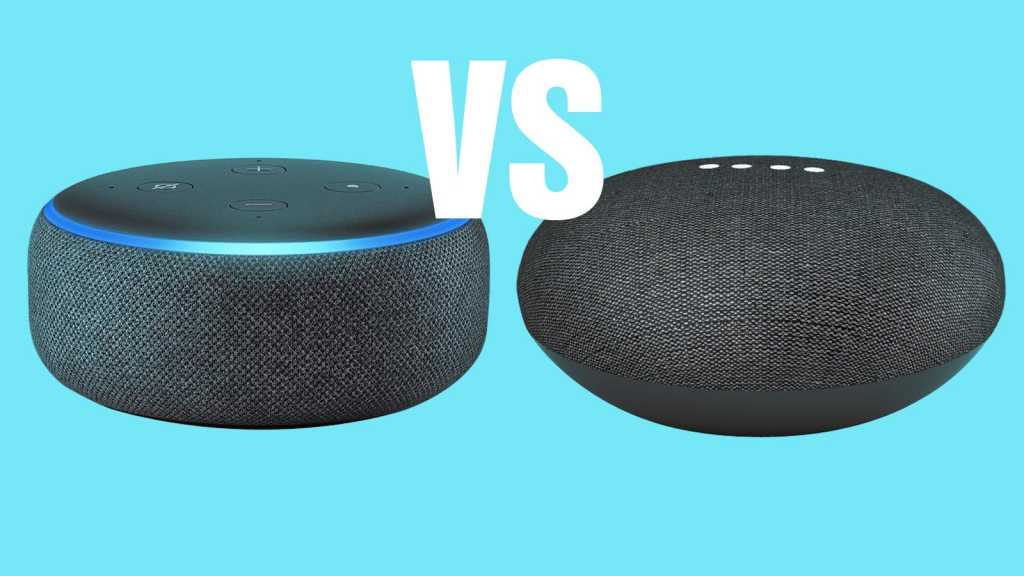 On sound quality the Nest Mini has a slight advantage, though the Echo Dot adds support for stereo pairs  as well as a physical AUX port. On price there’s nothing in it, but while Alexa takes the lead on Skills (allowing it to integrate with other smart-home kit, for example), in terms of brains and personality Google Assistant is out of Alexa’s league. We think Google Nest Mini is the better device, but depending on which smart kit you already have in your home the Amazon Echo Dot could be the better choice for your needs.

Amazon and Google lead the smart speaker market, and with their entry-level Echo and Home devices often significantly reduced as part of sales, they offer a tempting way to take your first step into this exciting product category. But do you buy Google Nest Mini or Amazon Echo Dot? We outline the differences.

The Nest Mini is available from Google, Currys, Argos, and John Lewis. You can also still buy the older Home Mini, often for less, from  Currys PC World,  Argos,  John Lewis, and  AO.com.

The Echo Dot 3 is available from Amazon and Currys, or you can spend a little extra for the £59.99/$59.99 Echo Dot with Clock, which includes an LED clock display.

Both these mini smart speakers feature a small puck-like design, and are covered in soft fabric. The Echo Dot is now more rounded than previously (now in its third generation), but Google Nest Mini is certainly the more pebble-like of the two.

There are controls on top of each device, though for the Echo Dot these are in the shape of clearly defined buttons while the Nest Mini has a touch-sensitive surface.

On the Nest Mini you can control volume by tapping either side of the device (or by asking Google Assistant to adjust the volume), and four LEDs shine bright from below the fabric cover to let you know Google Assistant is listening, with another two on the sides to highlight the volume controls.

Echo Dot has a light ring on its top that performs this same function, and from certain angles is easier to see than the Home Mini’s LEDs.

The Google Nest Mini is available in Chalk, Charcoal and colourful Coral and Sky, while Amazon’s Echo Dot comes in three shades of grey – Sandstone, Heather and Charcoal. That might sound bland, but this new edition is significantly better looking than previously.

An obvious difference between the two is found in the ports and connections. Both must be mains-powered using custom DC cables (though the original Home Mini had a handy Micro-USB port) but the Echo Dot has the advantage of an AUX port, which is missing from the Google Nest Mini. This allows you to hook it up to a separate speaker for improved sound quality using an audio cable. This is also possible with the Google Nest Mini, but only using Bluetooth (which, incidentally, is also supported on the Echo Dot).

While the 3rd-gen Echo Dot brought the Amazon device up to par with the original Google Home Mini, with the Nest Mini Google stepped back into the lead on audio – though the difference between the two isn’t vast.

You’ll be surprised by how loud is the sound from such tiny devices, and it also sounds good at these low prices.

You are able to adjust the treble and bass on both devices.

In our opinion, what’s more important than the pricing, design, ports and connections and even sound quality is what each device can do. After all, these are not ordinary cheap Bluetooth speakers, but smart speakers with intelligent voice assistants at their core.

In our opinion, Google Assistant is the better of the two. It supports more natural conversation (and now continued conversation without you having to say “Okay Google” each time), while Alexa needs you to structure your questions much more carefully.

To be fair, Amazon’s “Alexa” wake word rolls off the tongue much more naturally than “Okay Google” or “Hey Google”, which becomes a tongue-twister over time. Right now it’s impossible to change the wake word on either device.

With the power of Google Search behind it the Home Mini is more adept at search queries, and far more competent at answering the most random of questions when Alexa often cannot help. But with shopping giant Amazon behind the Echo Dot, it majors on retail queries.

Google Assistant also shows more personality than Alexa, though both are able to tell jokes and play games. (We’ve compiled lists of some funny things you can ask Google Assistant and Alexa.)

And with so many Google web services to tie into there is a huge amount of data that can be drawn upon when asking it to tell you about your day ahead or set calendar appointments and reminders.

Something Google Assistant can do that Alexa can’t is make free phone calls over Wi-Fi to anyone in your Google Contacts. Echo Dot allows you to make free calls only to other Amazon Echo users or those with the Alexa app installed.

Both will give you a news and weather briefing, which you can configure via the Alexa / Home app. They are also both great at playing music on request, whether from Spotify or their respective Amazon Music/Google Play Music services.

On each you can also set up routines, whereby you say a single phrase and they action various commands. These can include things like playing music, but also controlling smart home kit – and this is the key area in which Echo has the lead.

While more and more smart home devices now support Google Assistant, many more support Amazon Echo. This is because it has by far the commanding market share, which is largely down to its earlier release and multiple discounts offered by Amazon over the years. Indeed, which of the two you choose may depend entirely on what is supported by your existing smart home kit – it’s not cheap to replace.

For the Echo much of this integration is made possible through add-on ‘Skills’ (in essence developer-created apps), and its huge popularity means the Skills store is brimming with new features you can add – not all of them related to smart home products. We’re in two minds about this: many are very gimmicky, and some are useful. But we don’t like the idea of needing to add a Skill to get some of these features.

You can use IFTTT with both devices, but this is more useful on the Home Mini where there isn’t any ‘app store’ of skills to enable as with Alexa. Some of the time you can control devices directly with no set up but otherwise it’s something you’ll have to set up yourself using IFTTT, which can be a bit of a hassle.

On sound quality the Nest Mini has a slight advantage, though the Echo Dot adds support for stereo pairs as well as a physical AUX port. On price there’s nothing in it, but while Alexa takes the lead on Skills (allowing it to integrate with other smart-home kit, for example), in terms of brains and personality Google Assistant is out of Alexa’s league.

We think Google Nest Mini is the better device, but depending on which smart kit you already have in your home the Amazon Echo Dot could be the better choice for your needs.