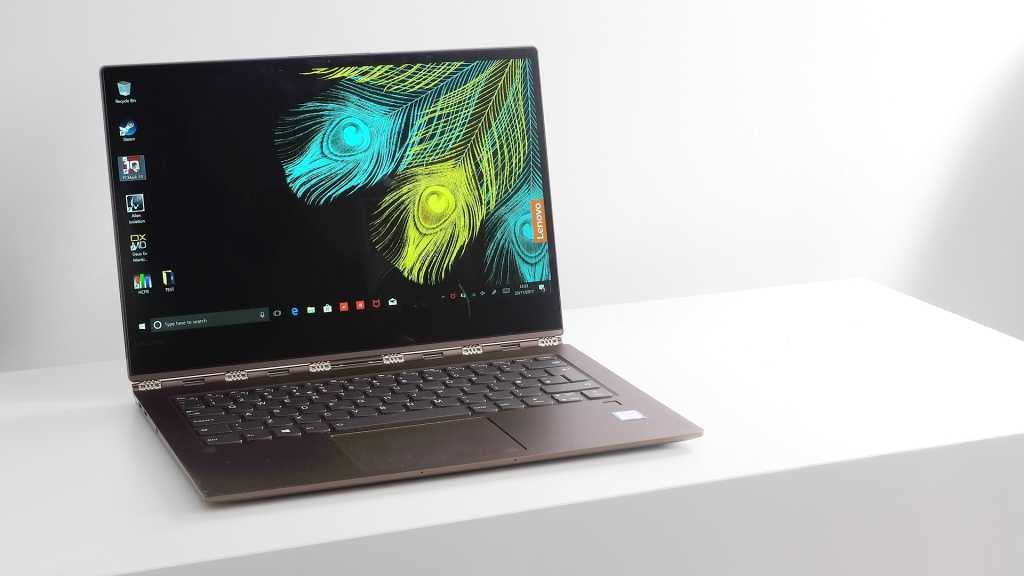 The Lenovo Yoga 920 is an excellent hybrid laptop. It has amazing battery life, great build, good looks, real power and a high-quality screen with a pressure sensitive stylus. What’s not to like? It’s not great for gaming, and a few similarly slim laptops now have discrete graphics. Display brightness could be higher too and it would be good to see the 4K option come to the UK. However, as that will also come with a higher price we can’t honestly say we’d necessarily recommend it over this model.

The Lenovo Yoga 920 is a laptop with a 360-degree hinge. Lenovo makes a handful of different models with this design but the 920 is the most stylish of the lot.

Lighter alternatives are available. But with a powerful 8th generation Intel processor, great battery life and an ultra-high contrast screen, this is one of the best portable laptops money can buy.

That’s a £230 difference, but it’s justified by the extra storage and power. Lenovo has kept things simple, and you’re not getting ripped off with either spec.

Both versions come with Lenovo’s active stylus, and have a one-year standard warranty.

There are several interesting aspects to the Lenovo Yoga 920 design. But the one you’ll almost certainly notice first is the hinge. Like the Yoga 910, it has a very bold hinge style inspired by watches with stainless steel straps.

Would it look better with a simple hinge merging into the handsome purplish-bronze of the rest of the shell? Probably. But we’ve known this design for years. Maybe your eyes are less jaded.

The hinge lets the screen sit at any angle, even just a few millimetres from being closed, and there’s almost no wobble. It’s a great hybrid hinge.

Another interesting design choice is that while the Lenovo Yoga 920 is thin and light, getting the slimmest, lightest sounding specs to brag about online isn’t Lenovo’s top priority. The laptop is 14mm thick and weighs 1.37kg. That’s very similar to the HP Spectre X360, and both models care about battery stamina as much as slim design: a great approach.

The Lenovo Yoga 920’s build is exceptional. It’s made of aluminium, giving it that cool and hard feel magnesium alloys just don’t have, and the rigidity of this laptop is virtually unbeatable.

Press down hard on the keyboard and it still refuses to flex. The screen too is very rigid.

Given the high-end style focus here, the lid does look a little plain next to some of the competition. But at this point we’re looking for possible complaints. The Lenovo Yoga 920 is a charming laptop that sits proud among its high-end peers.

At a time when thin laptops like this are rapidly losing USB connectors, we’re also happy Lenovo hasn’t done the same. There’s only one USB 3.0 port, but if like us you have a bunch of hard drives and USB peripherals hanging around, this is extremely useful. No adapter required.

Other than this, you just get two USB-C ports and a headphone jack. There’s no SD card slot, which is disappointing but virtually the standard in this class today.

Both USB-Cs support the Thunderbolt 3.0 standard, meaning their maximum bandwidth is excellent: 40Gb/s.

The Lenovo Yoga 920 has a typical Lenovo slim and light keyboard. Its action is somewhat shallow, but nowhere near the level of Apple’s latest laptops.

If you’re used to a ThinkPad-style keyboard, you may not like it. However, there’s solid key resistance, typing is very quiet and we have no issues with typing accuracy.

The keyboard also shows off one of Lenovo’s classic design traits. There’s a slight curve to the bottom of each key, softening the look of the entire inside of the Lenovo Yoga 920.

Typical of a high-end lifestyle laptop, there’s also a backlight. This can be set to two levels, a relaxed glow or really quite bright.

Below, the trackpad is of similar top-end quality. It’s large and has a very smooth textured glass finish.

The button action is light and “high pitch” rather than mellow and meaty, but quick double taps are a cinch and we haven’t encountered any driver issues. To go looking for potential problems again, the click is quite “treble” in tone, making it more distracting than some if you’re working in a quiet space. It’s a minor niggle that hasn’t really bothered us.

The Lenovo Yoga 920 also has a deep-recessed fingerprint scanner to the right of the pad. This lets you log into Windows with your finger. There’s occasionally a delay of a second or so before the laptop registers your print, but unlike some it doesn’t tend to fail, making you place your finger again.

Look at a Lenovo Yoga 920 product page and you could well assume it has a standard 13in screen. However, this is actually closer to a 14in laptop as its display measures 13.9in across.

As it has a slim 5mm screen surround, this screen fits into a traditional 13in laptop frame, though.

In some countries you can get the Yoga 920 with a 4K display, but at the time of writing it’s 1080p only for the UK. We’re perfectly happy with this resolution, although it does make slight pixellation in fonts quite obvious to those looking closely.

This is not a wide colour gamut display, but it is rich enough to do the job for everyone but graphics professionals and photographers. It covers 82.4% of sRGB, 58.1% of Adobe RGB and 60.8% of DCI P3.

Deep reds and blues look rich, with no obvious sign of undersaturation. The colour temperature is very warm, though, giving whites and slightly yellow tinge. However, we find this look quite pleasant.

The Lenovo Yoga 920’s strongest element, though, is contrast. At 1369:1 it’s among the highest we’ve seen from an LCD laptop. Even at maximum brightness the display’s blacks almost merge into the screen surround when you’re in a room with moderate lighting.

This makes the laptop perfect for late-night movie watching.

It’s not quite as good out in bright daylight. The Lenovo Yoga 920’s maximum brightness is 300cd/m, which is fair, but the brightest laptops get close to (and occasionally exceed) 400cd/m. Greater brightness would be nice, but the laptop’s display also has an excellent anti-glare coating, minimising reflections. The screen won’t look bright outdoors, but should be visible.

Like other hybrids, the Lenovo Yoga 920 has a touch display and, new for this year, you get an Active stylus in the box. Its specs are excellent, 4096 pressure levels matching some pro-grade graphics tablets. Unusually, it takes three batteries, one AAA and two tiny watch-style cells.

The pen is metal and has a rubberised nib for a more natural feel. However, like a lot of laptop styluses the feel isn’t totally smooth when you drag the pen across the display quickly. Still, for casual design work and doodling, it’s great.

You might have to pay up to around £50 for such a stylus elsewhere.

The Lenovo Yoga 920 is among the first laptops we’ve reviewed to have an 8th generation Core-series processor. While these won’t radically alter how Windows 10 feels, as a 7th generation chipset already runs the OS extremely well, Intel has made some rather interesting changes.

The standard clock speed of these cores is 1.4GHz, but the Turbo is 4GHz.

According to Geekbench 4 at least, this results in incredible productivity performance gains when using the Turbo. The Lenovo Yoga 920 scores 14423 points in Geekbench 4 (4668 per core), which is much closer to the result of a 7th Gen Core i7 you might find in a giant workstation than the Core i7 U-series model used in the last wave of slim and light laptops.

Recently we reviewed the HP Envy 13 with the last-gen Core i7. It scores 8499 in Geekbench 4. That’s a huge performance gulf.

Laptops like this aren’t designed to work in Turbo mode all day, but in short-ish bursts the Lenovo Yoga 920 appears to have true desktop-grade power.

PC Mark 10, which emulates normal day-to-day use (around 40 minutes of it), pegs the Lenovo Yoga 920’s performance as between a 7th gen Core i7 U series and the HQ type you’d never fit into a laptop this small. It scores 3976 points, up from around 3280 from a last-generation CPU.

We’re impressed. However, we’re also a little disappointed that this great raw CPU improvement hasn’t been joined by a corresponding improvement in the GPU. The Lenovo Yoga 920 has an Intel HD 620 family graphics chipset just like the last generation of laptops.

Gaming performance has barely improved. We’re seeing slightly better results, perhaps thanks to the improved CPU, but nothing more.

If you want to be able to play games, look out for a laptop with a GeForce MX 150 GPU. Even if it uses a last-gen CPU it will get you much better frame rates than one of these new processors alone. You can currently buy an HP Spectre x360 with a new Intel CPU and that GPU too, although it costs £1599. The Envy 13 is a less “fancy” option, landing at £999.

The Lenovo Yoga 920 is near-silent much of the time. When pushed the fan kicks in, and gets reasonably loud, clearly working hard to get rid of the heat from the CPU. However, the noise is never high-pitch or annoying. The fans also rev down very quickly as the heat is dispersed.

There are many great elements to the Lenovo Yoga 920. Battery life is one of the best.

A combination of the new Intel Core processor and a large 70Wh battery give the laptop not just all-day battery life, it’ll last well into the night too. Playing a 720p video at 120cd/m, which is an unusually high 77% brightness here, the Lenovo Yoga 920 lasts an incredible 16 hours 45 minutes.

This is far in excess of Lenovo’s own claims, of 12 hours. It’s because Lenovo’s figures are based on MobileMark testing, based on more taxing mixed usage.

The Lenovo Yoga 920 is one of the longest-lasting laptops in the world right now, although the Dell XPS 13 and HP’s Envy and Spectre laptops with 8th Gen CPUs are unlikely to be far behind.

Too much praise? One of the few parts of the Lenovo Yoga 920 we’d like to see improved is the speaker setup. While the mids and treble are clear, the bottom-loaded JBL speakers don’t have any real bass, so kick drums in music and explosions in movies lack weight.