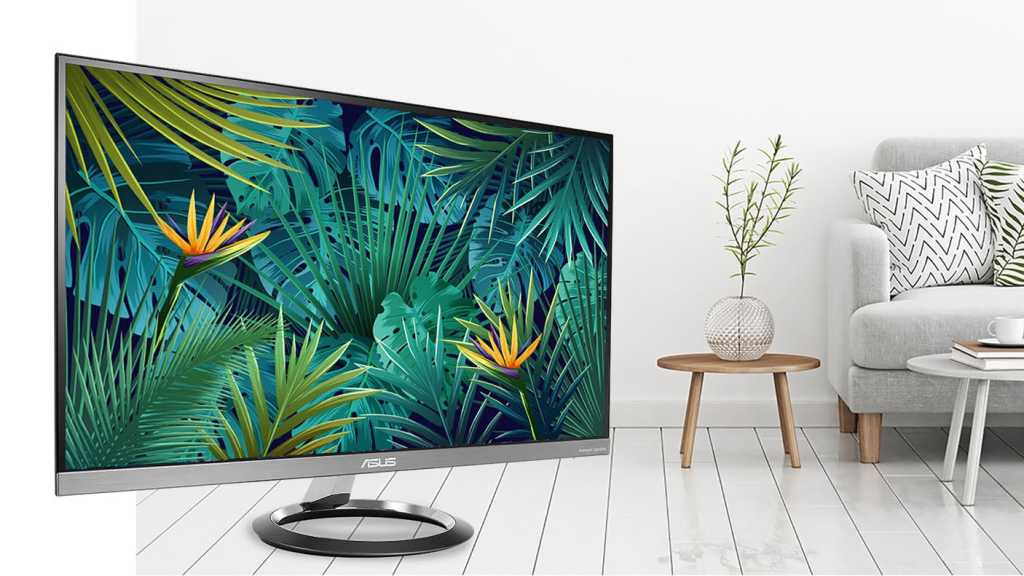 Asus has put some attractive options in the MZ27AQ that would work well for occasional gamers and weekend photographers alike. The Harman Kardon tweaked speakers are especially impressive, give how abysmal monitor audio can often be. The asking price is a little on the high side. But as we’d expect from Asus, this is a high-quality device.

There are lots of people that don’t use their computer for a specific role. We pigeon-hole them as ‘occasional gamers’ or by some other equally imprecise description that fails to identify what they’re exactly doing.

The ASUS Designo MZ27AQ Ultraslim Monitor speaks to them, the legions of undefined users that write code on Monday, pen letters on Tuesday, play games on Wednesday and watch Netflix all weekend.

But is being a Jack of all trades and a master of none, better than being a master of one? Check out our best monitors chart.

The RRP of the ASUS Designo MZ27AQ is £399 in the UK ($449 in the USA), although finding it for less than that amount can be a challenge.

Asus also makes the MX27AQ, an almost identical design that doesn’t have the external subwoofer for about £30 less. While IPS panels with this resolution abound, finding others that have precisely this specification isn’t easy, especially in respect of the speakers.

If you discount that factor, the Acer 27in RC271U has a very similar performance envelope for a little less, and Dell has the older UltraSharp U2715H for about the same cost as the MX27AQ.
It is possible to get a 2560×1440 resolution screen for less than £300, although certainly not with this level of construction or image quality.

It turns out, unexpectedly, that ‘Designo’ isn’t a made-up word. It has Catalan origins from which the English ‘design’ is a descendant, we are reliably informed.

For a monitor at this price, one might expect some distinctive styling, and Asus hasn’t disappointed with an elegant thin panel supported on a chrome plated ring.

It describes the screen as frameless, although it has a 0.84cm frame on three sides and a 2cm silver strip across the bottom. Centered on this strip is the ASUS logo and on the far right is also the Harman Kardon branding, that hint at the audio capabilities we’ll discuss later.

The minimal aesthetics of the front are continued around the back. All the ports are placed on the right side, looking from behind, and a single directional joystick is located on the far left.

These joysticks have appeared on every screen we’ve seen recently, and are the new Meta for OSD manipulation. We approve of this change. Because over the years we’ve hit the wrong button and cancelled a complicated configuration more times than we can collectively recall.

While we also rejoiced that Asus didn’t use one of those annoying plastic covers for the port area, we also noted that all the ports face directly outwards and not down. As there isn’t any cable management provided, this could make for some messy wiring behind the screen.

And, although the main part of the display is just 7mm deep, the ring-shaped support stops the Designo MZ27AQ being flush against a wall. An obvious solution to this would be to wall mount it, but Asus doesn’t provide a VESA mount option, sadly.

The provided inputs include two HDMI 1.4 and a single DisplayPort 1.2, making this screen suitable for anyone who likes to connect their PC plus a games console, and a streaming device such as the Chromecast.

With slimness like this Asus opts for an external PSU that looks originally conceived for a laptop. It’s small, and the cable delivering power is sufficiently long that it doesn’t need to be placed anywhere near the screen.

The other external feature of note is what looks like Asus designed its own Alexa smart speaker. This is in fact a 5W subwoofer that forms part of a special audio system design in coordination with Harman Kardon.

Placing this part is easier on the left than the right, due to the short length of the cable that is necessary to power it. Placed on the left-hand side, the subwoofer can be forward of the screen without interfering with the view. Where on the right the cable isn’t long enough for it to sit beyond the edge of the frame. Making the cable just 10cm longer would have avoided this minor issue.

How good any monitor is at the different tasks it performs will be strongly influenced by the technology employed, and the Designo MZ27AQ is no exception to that thinking.

The natural resolution of 2560×1440 on a 27in panel looks incredibly crisp, and the colours are strong and well saturated without appearing garish.

A number of these modes use Asus’ ‘SPLENDID Video Intelligence Technology’, to enhance the experience. There are also general colour temperature modifications, a Low blue light option, and three skin tone selections.

These options tend to lean this design towards graphical work and movie viewing than games, although curiously there is also an option for Adaptive-sync. As this panel has a maximum of a 60Hz refresh, the scope for this is only 40-60Hz, so it is of limited value to those that have AMD GPU’s that can drive 2560×1440 at 40-75fps on their title of choice.

Other oddities include an inbuilt eye-test that shows you letters of different sizes like those wall charts you see at the opticians. And, a QuickFit function that scales images so that they’re the same size that they’ll be eventually printed (assuming the files DPI is correct).

Not sure of the logic there, but someone at Asus thought it was useful enough to include.
Like the screens general one-size-fits-all ethos, the menu provides something for everyone, even if it leaves things like precise colour temperature and overdrive off the menu.

As with all our screen reviews, the Datacolor Spyder5 calibrator was deployed to assess the worthiness of the panel Asus put in the MZ27AQ.

In the specification, Asus quotes sRGB of 100 percent, and we registered 99 percent without specifically activating the sRGB mode. AdobeRGB is 77 percent, and the Gamma value remains practically glued to 2.2 across the whole response range.

Unusually, the quoted brightness of 350cd/m2 was below what we recorded, with 100 percent brightness generating a powerful 407.4cd/m2 of illumination.

The static contrast isn’t quite up to the specs, but the 700:1 it does deliver is much better than many IPS panels of this type can offer.

Those working in professional colour will want more than this, but they’ll also be paying for that extended Gamut, and for most users the colour scope of the MZ27AQ is wonderful.

But, with its Harman Kardon branding, the MZ27AQ isn’t only about visuals, it’s also about sound.

The visual standout feature of this design is the bean-tin sized subwoofer, although we’d contest that this device is something of a distraction. Because what makes the most difference to audio quality is the two 6W drivers built into the actual monitor.

These can output a decent level of output, and cover enough frequencies that the horrible clipping many display speakers create isn’t as apparent.

They also have some bass mixed in their too, although that’s the forte of the subwoofer. How that device performs is very dependent on the surface you place it. Because how it vibrates the desk surface very much dictates the contribution, good or bad.

On a softwood table it didn’t add much, but on something sturdy the audio resonates much more. Some experimentation might be necessary before you get the best results.

The sound solution isn’t on par with an external dual driver and subwoofer combination, say like the Logitech Z333, but it’s substantially better than most displays are saddled – if they even get speakers.