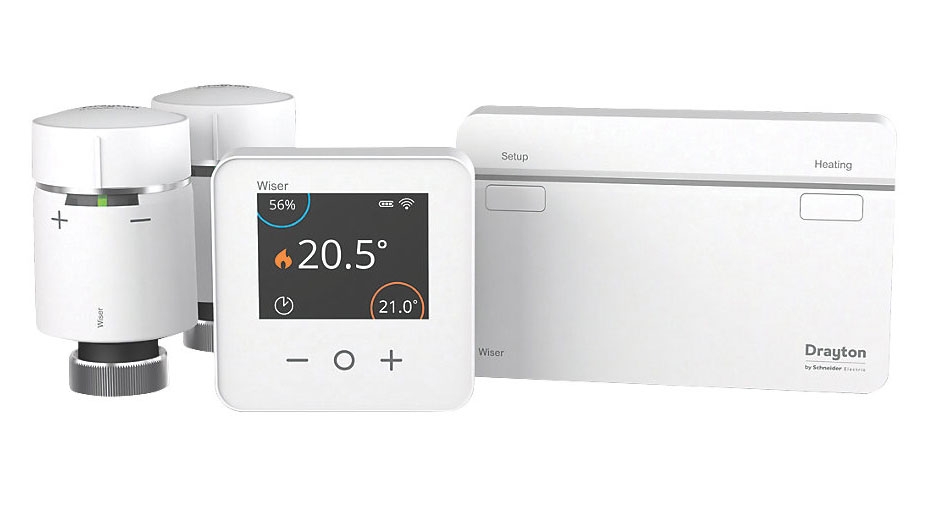 The Wiser heating system does exactly what it promises: it’s easy to install and easy to use. It’s a good choice for UK homes.

There are lots of smart heating systems to choose between. From big names such as Nest and Hive to lesser-known systems from Tado, Genuis and Netatmo. One name you’ve probably heard of is Drayton, one of the biggest brands in UK heating systems.

Its Wiser system aims to make the upgrade from dumb to smart heating as simple as possible, while also giving you a system that’s both easy to use as well as comprehensive.

And on the face of it, we think it has succeeded. There are various starter kits to suit different types of boiler, and multi-zone kits which include smart radiator valves that let you create heating zones without having to change any plumbing.

The kit is very simple to install if you have a standard old-style programmer wired up to your boiler. And everything else is wireless and battery powered so there should be no need to pay for an electrician to install it.

Wiser supports Alexa and Google Assistant as well as integration with IFTTT. In September 2021, Schneider Electric announced that Drayton Wiser will be compatible with Matter, the industry-unifying standard that aims to simplify development for companies and streamline life for smart home customers.

What this means for Wiser users is that their smart heating system will be able to integrate with smart home devices from the likes of Google, Amazon and Apple.

We were sent the Wiser Multi-Zone Kit 1 for review. This includes a one-channel thermostat, plus two radiator valves (these bring the multizone control: you don’t need a heating system plumbed for multizone as they control individual rads).

At under £200 it’s good value considering most smart radiator valves (smart TRVs) cost between £50 and £70 each. Nest’s third-gen thermostat costs £179.99 on its own and as of yet, Nest still hasn’t launched its own TRVs.

Bear in mind that a one-channel kit is what you’ll need if you have a combi boiler. But if you have a separate hot water tank and want to control that as well, you’ll need the  two-channel thermostat kit. Like all Wiser kits, this also supports multi-zone.

Individual TRVs cost £40 each from Amazon or Screwfix, which is cheaper than most smart TRVs and means you can control extra rooms without the costs spiralling out of control.

If you need it, there’s a three-channel thermostat kit which doesn’t come with any TRVs but does include two thermostats, and extra wireless thermostats are £79.99. 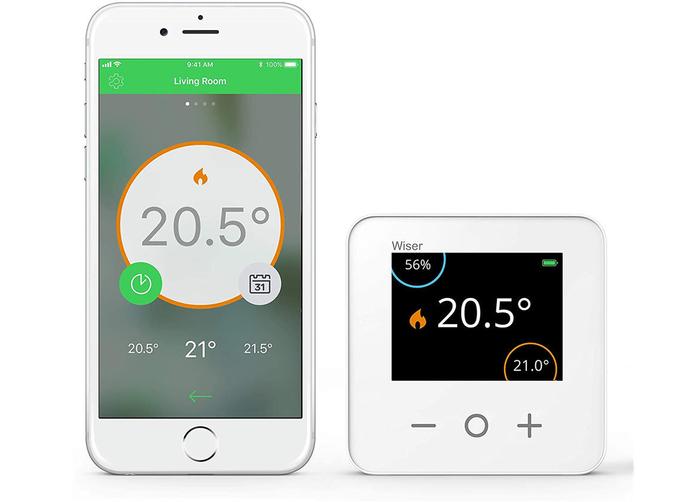 And if you don’t want the TRVs, the basic thermostat and relay bundle is only £139.99, but in reality closer to £120 from Amazon. And that’s a great price.

There’s also the Wiser Plug. These cost £41.99 each ( slightly less from Amazon) and allow you to turn appliances on and off from the Wiser app.

The control box uses the industry-standard connector so in a lot of cases, upgrading from your old manual heating programmer to the Wiser takes just a couple of minutes and a screwdriver. Note that on the one-channel kit the box has only a Heating button. On the two-channel version you also get a Hot Water button. 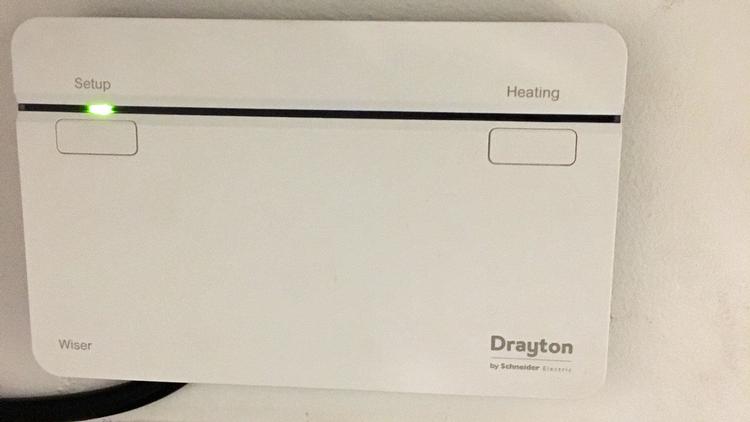 If it does need wiring up, diagrams are included in the installation instructions or you can pay an electrician to do this job for you if you’re not confident.

Then it’s a case of installing the Wiser app on your iPhone or Android phone, creating an account and using the on-screen instructions to set up the system, including connecting to your Wi-Fi network. In all, it should take you under 30 minutes.

The thermostat is wireless and powered by a pair of AA batteries. You can place this anywhere, and even take it from room to room. It has a decent colour display and clearly displays the current temperature, the programmed temperature and the current humidity level. 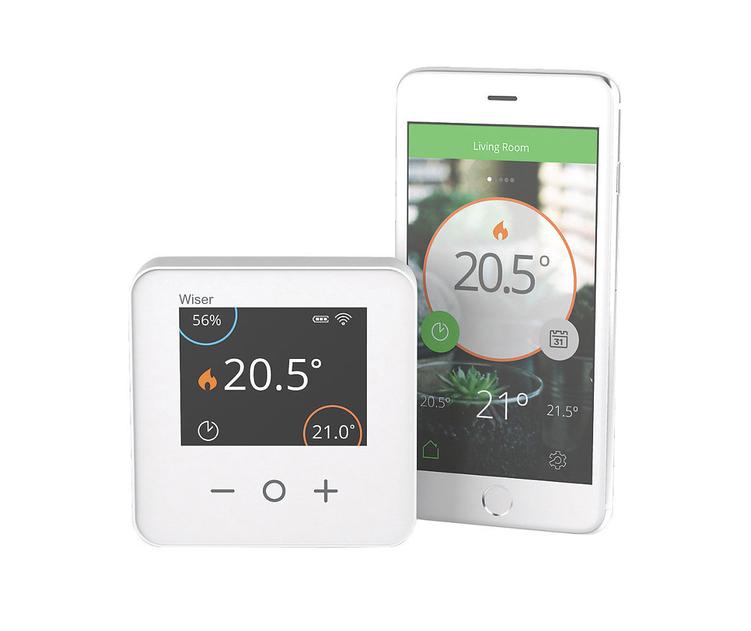 The only hiccup could be if your radiators don’t have compatible valves already, but several adapters are included for popular valve types.

Drayton has designed the TRVs well. They have a control on top so you can manually control the valve: turning towards + boosts temperature by 2 degrees, and decreases by the same when turned to -. Even though there’s no screen which shows the temperature, it’s still handy if guests are staying or you don’t want to fire up the app just to adjust the temperature of one radiator. Some smart TRVs (even those which cost more) have no manual control or temperature display at all. 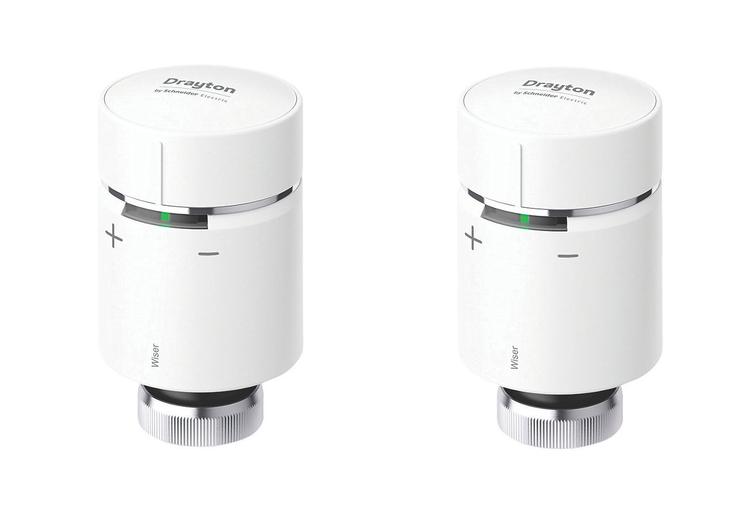 The valves also self-calibrate when you first install them, which should ensure that they all work properly. 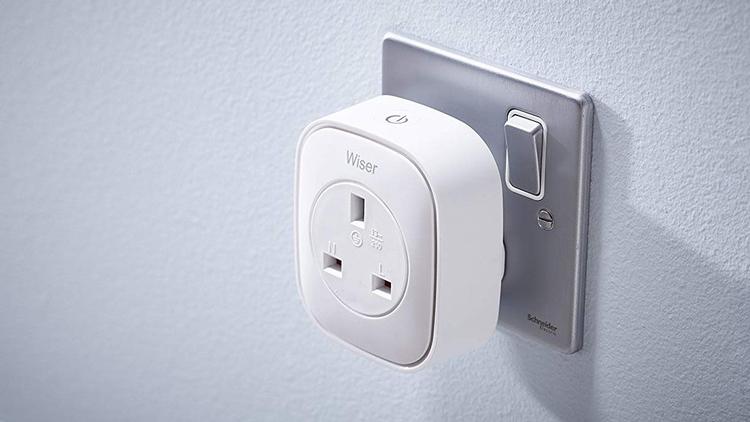 A fairly recent addition to the system is the Wiser Plug. It’s more expensive than the Wi-Fi smart plugs you can buy from TP-Link and others, but the reason is because it has a built-in Zigbee hubs so acts as a range extender as well. The plugs can be set to automatically switch off when you enable Away Mode in the app. So the extra cost could well be worth it for the extra convenience.

They support Alexa and Google Assistant (and IFTTT) so you can control them with your voice, or trigger them using an IFTTT applet.

We found it took literally two minutes to get the plug working via the app. You can set a schedule for each plug, including different times for different days.

The app itself is well designed, its interface is clean and intuitive. You can set up a schedule just as you would with a traditional programmer. And thanks to the TRVs, you can also create schedules for individual rooms. 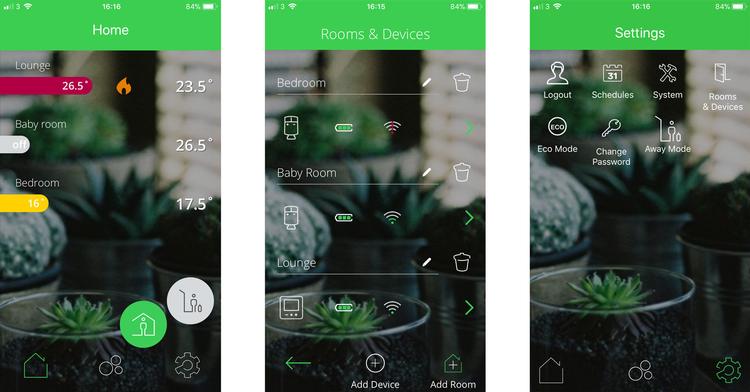 For example, you might install the valves in two bedrooms and set up a schedule so they’re not heated during the day, saving money in the process.

Alternatively, you might want the kitchen and bathroom to heat up earlier than other rooms. Whatever your preferences, the smart TRVs give you precise control over what happens when, so it’s well worth investing in a few more if you can afford it.

If you opt for the two- or three-channel version you will also be able to set schedules for when the hot water should be heated.

Naturally, you can use the app to control the system when you’re out. So if you’ve been away for a few day and you end up coming home earlier than expected, you can remotely turn on the heating so your home is warm when you arrive.

Wiser also offers an Eco mode which takes into account the outside temperature and learns how quickly your home warms up and cools down. This way it won’t needlessly turn the heating on early or keep it on for too long.

A boost function on the thermostat, replicated in the app, allows you to increase temperature in a certain room or zone for a set amount of time. This is useful, but it would be nice to have the option to keep the change until the next scheduled temperature change.

There’s also a holiday mode and an Away Mode. Originally, the latter was a manual control, but there’s now geo-location which uses your phone’s position to work out that you’re not at home and turn off the heating (and any Smart Plugs you have attached to the system). 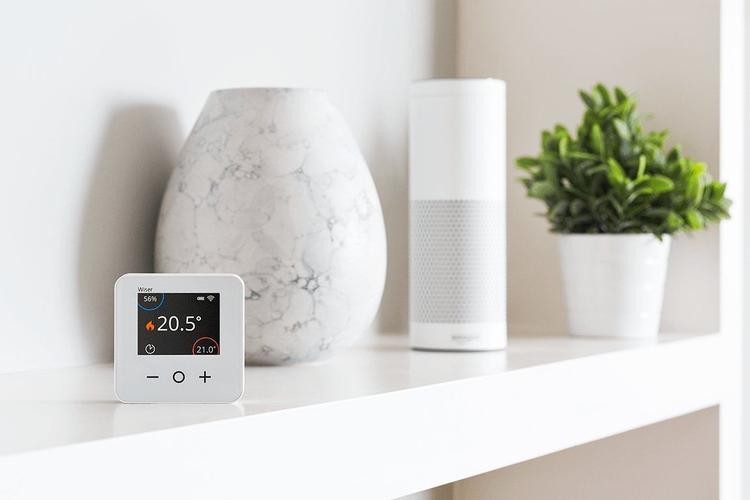 Alexa support was there from the get-go, but there’s now support for the Google Assistant too. Plus, IFTTT support has been added. It’s unlikely to get Siri support since the Wiser isn’t HomeKit compatible.

We had an issue with a weak signal from the control box to the thermostat and radiator valves. However, after a call to Drayton’s support, we were sent a booster box which largely fixed the problem. This is no longer offered: customers are instead directed to purchase the new smart plugs which act as range extenders. Beware, though, that these still may not cure your problem, especially if you live in a house with thick stone walls.

As the system uses a closed Zigbee network rather than Wi-Fi to communicate it isn’t necessarily the size of your house which determines signal strength but rather the level of interference from other devices as well as the thickness and construction of your walls. It operates as a mesh network, using a daisy chain topology, so each range extender talks to one another, carrying the signal through the house.

We’ve had the system installed for over 18 months now and, aside from a couple of connection problems, we’ve been impressed with it. It’s simple to use and does the job well.

Since we first tested Drayton Wiser and wrote this review, the system has had a number of updates, and new features have been added to the app.

There’s a new Underfloor Heating Controller, which will allow you to set your wet underfloor heating and radiators via the Wiser app. The new Electrical Heat Switch will give you similar control over anything from heated towel rails to plinth and underfloor heating.

The app itself has had some major updates since its user-friendly redesign at the end of 2020. The new features include Insights+ and Moments. The Insights page in the app brings together lots of information about your heating to help you save money. There’s access to a detailed heat report, you can track your hourly activity and even see how often you’ve turned the heating up or down. You can also easily turn on Eco and Away Mode. 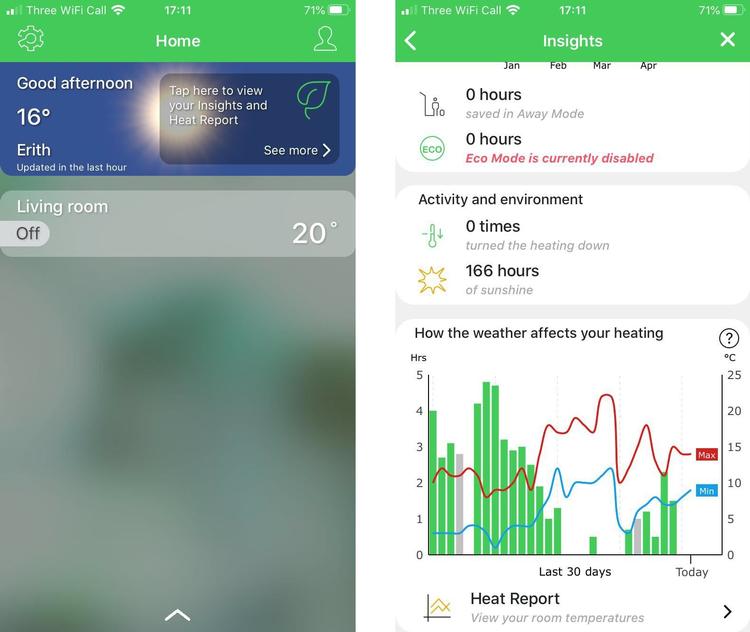 Moments lets you group heating, hot water or smart plugs together to control multiple devices with a single tap. This would allow you, for example, to boost the heating in the living room, switch off the lamps and turn on the TV (via Wiser smart plugs) to instantly set the scene for a movie night.

There’s also a new, dedicated heat pump setting that can be chosen during installation.

The Wiser heating system does exactly what it promises: it’s easy to install and easy to use. It doesn’t have all of the advanced features you’ll find in Honeywell’s Evohome, but then again it is a lot cheaper and new functionality is being added all the time.

There are a few rival systems, including Hive, Tado and Netatmo, which are now available with radiator valves so you can control the temperature in certain rooms, but none can match Wiser’s low cost.

We also like the app which looks good and is – in general – a pleasure to use. Drayton has added a few of the missing features since launch including Alexa, Google Assistant and IFTTT support, plus the smart plugs which double as range extenders.