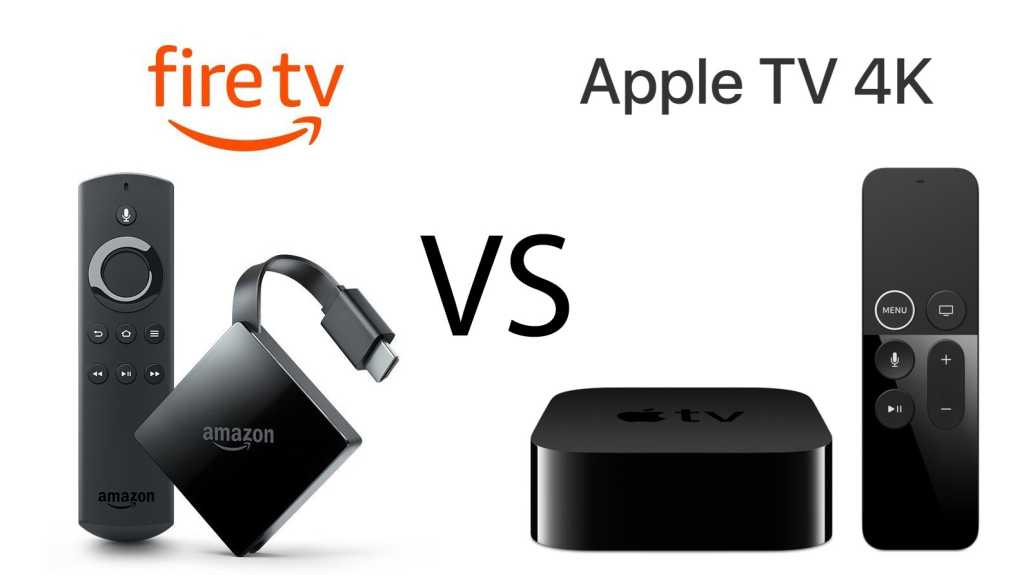 Unless you live exclusively in Apple’s world, it’s hard to justify the extra cost of an Apple TV over Amazon’s Fire TV. Apple doesn’t even have its own video streaming service (yet, at least) so there are no exclusive video apps that you can’t get on a Fire TV. Games are – subjectively – slightly better on the Apple TV, but if your priority is streaming videos, the Fire TV makes more sense even if you have to spend an extra £14 to get the adapter for a wired network cable.

Amazon’s latest Fire TV isn’t its first to support 4K video streaming, but it has managed to shrink it down so it can hang behind your TV out of sight, just like Google’s Chromecast Ultra.

The Apple TV 4K is an altogether larger, more expensive box with a couple of extra features. But it’s also a lot more expensive at £179: that’s £110 more than Amazon’s box.

But before you jump to any conclusions about the Fire TV being the obvious choice, let’s delve deeper into their differences so you spend your money wisely.

Which one is cheaper?

You can buy a Fire TV 4K for £69.99 from Amazon. That’s £10 cheaper than its predecessor. However, it lacks the Ethernet port of the older model and you’ll have to pay £13.99 for the  adapter to give the new model the same port if you find that your Wi-Fi isn’t good enough for 4K streaming.

Which has better specs?

Here’s a handy table which shows the similarities and differences in the main specifications.

You can see that both streamers have pros and cons, but in the main these will affect you only if you have a TV or sound system that supports the extra features. For example, the lack of Dolby Vision support on the Fire TV is only an issue if your HDR TV supports Dolby Vision.

Right now, very few do, and even those that do can’t manage the current peak target of 4,000nits brightness, let alone the ceiling of 10,000nits. So, put simply, unless you’re planning on buying a very expensive TV with Dolby Vision in the near future, this difference between the two boxes is moot.

What about audio? Apple has said that it will add Dolby Atmos support at some point, but the Fire TV has it already. Again, this matters only if you have an Atmos system already, or are planning to buy one. And, of course, if you’re happy to buy an Apple TV with the promise (but not a guarantee) that Atmos support will arrive soon.

Size could also be a factor for you. The Fire TV can hide out of sight, but the larger Apple TV is likely to have to be put on a shelf below the TV.

Streaming 4K HDR over Wi-Fi is pretty demanding. You’ll need to make sure you have a fast broadband connection (ideally more than 40Mb/s) and an up-to-date router that supports 802.11ac.

Alternatively, and perhaps a better idea, is to connect your streamer using a network cable. This is usually faster and more reliable. There’s a snag with the Fire TV, though: it doesn’t have an Ethernet port.

Amazon will sell you an adapter for £13.99 but as far as we can work out, this is a 10/100 device, not Gigabit (1000Mb/s). That shouldn’t make much difference, admittedly, as you’re unlikely to be streaming any video with a bitrate over 90Mb/s. If you know you will be, then go for the Apple TV, which has a Gigabit Ethernet port on the back.

Is storage important on a device which, by definition, streams video? Yes and no. These boxes let you install apps to give you extra video services, but they also let you install games. Games can take up a lot of room, so the 8GB Fire TV could fill up fast.

But for those who plan to mainly watch video from Netflix, YouTube and other services, it’s not a concern.

Which has better software and apps?

The biggest difference, for some people, will be the software these boxes run. We’re not talking interfaces, as both are decent and easy to use.

We’re not even talking about voice assistants: Alexa is fairly capable at searching for and controlling video playback on the Fire TV; Siri does the same on the Apple TV.

Really, it comes down to the fact that those with iPhones and iPads will have a better experience with an Apple TV.

For one thing, the Apple TV supports AirPlay so you can beam videos and photos from your phone to your TV. You can also stream video from apps that aren’t available on the Apple TV yet, including some UK catchup TV apps.

Apple doesn’t have its own video streaming service though, so you’ll likely use Netflix and other apps rather than renting or buying TV shows and films from iTunes.

It’s supremely easy to set up an Apple TV if you have an iPhone as it saves you from having to enter your Apple ID, Wi-Fi password and other annoying details. And even if you do have to enter some text, the Remote app (now built into iOS 11) lets you do so on your phone or tablet’s keyboard.

Plus, we love that you can speak passwords using the Siri remote: no more fiddling around with alphabetical on-screen keyboards on your TV.

Last, the Apple TV can be a Homekit hub, allowing remote control of smart home gadgets from your phone when you’re out and about.

With the Fire TV, you can also mirror your phone’s screen, so long as it supports Miracast, and this means you can also stream video from apps and services that aren’t available directly on the Fire TV.

The Fire TV does have a wider choice of UK-specific video apps, though, but you’ll never be able to get any Apple services through it, so you can’t watch and videos you’ve bought from iTunes.