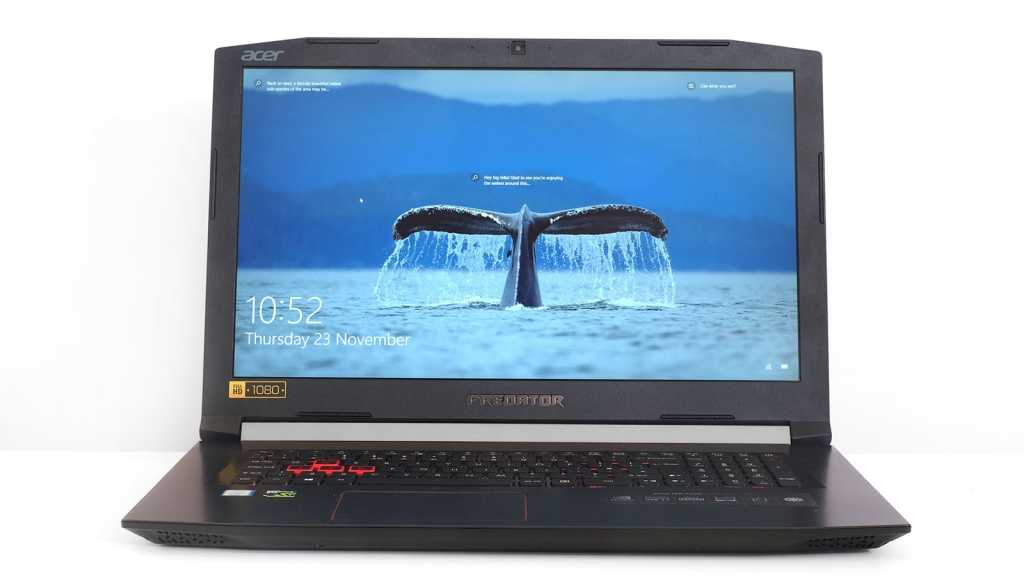 The Acer Predator Helios 300 is a good gaming laptop if you’re after a machine that’ll be plugged-in 95 percent of the time. It gets you good performance per pound with elements of gamer flashiness that appeals to some. The screen is what secures it a fairly good score, though, with solid colour and decent contrast a close enough match for just about any non-wide-gamut display. Games look good on the Acer Predator Helios 300. Poor battery life and an uncomfortable trackpad mean it’s not as appealing away from the charger, without a mouse plugged-in, though.

The Acer Predator Helios 300 is the first mid-range laptop in the Predator range. This series used to be filled with laptops designed to show off the latest hardware, complete with trackpads and keyboards designed for the hardcore crowd.

This new Helios 300 model tones everything down a bit, mainly for those who don’t have a couple of thousand to spend on a new laptop. The trackpad is disappointing and the battery life poor, but if you want a home gaming laptop with which you’ll use a mouse, the Helios 300 is a great choice.

How much does the Helios 300 cost?

The best UK deal at the time of review was £899 from Amazon.

As you upgrade the graphics to a GTX 1060 and the CPU to a Core i7 and the price gradually rises to £1399. Asus currently charges roughly £200 more for an Asus ROG GL702VM with a similar spec.

We’d recommend putting your money into the GPU rather than CPU at this level: something to bear in mind.

These laptops come with a 2-year return-to-base warranty.

For more alternatives, check our list of the best gaming laptops.

The Acer Predator Helios 300 has a lot of the design motifs of the full-blooded Predator models, such as the gamer give-away Predator logo and red strips across the back. However, the build is solid rather than bomb-proof. 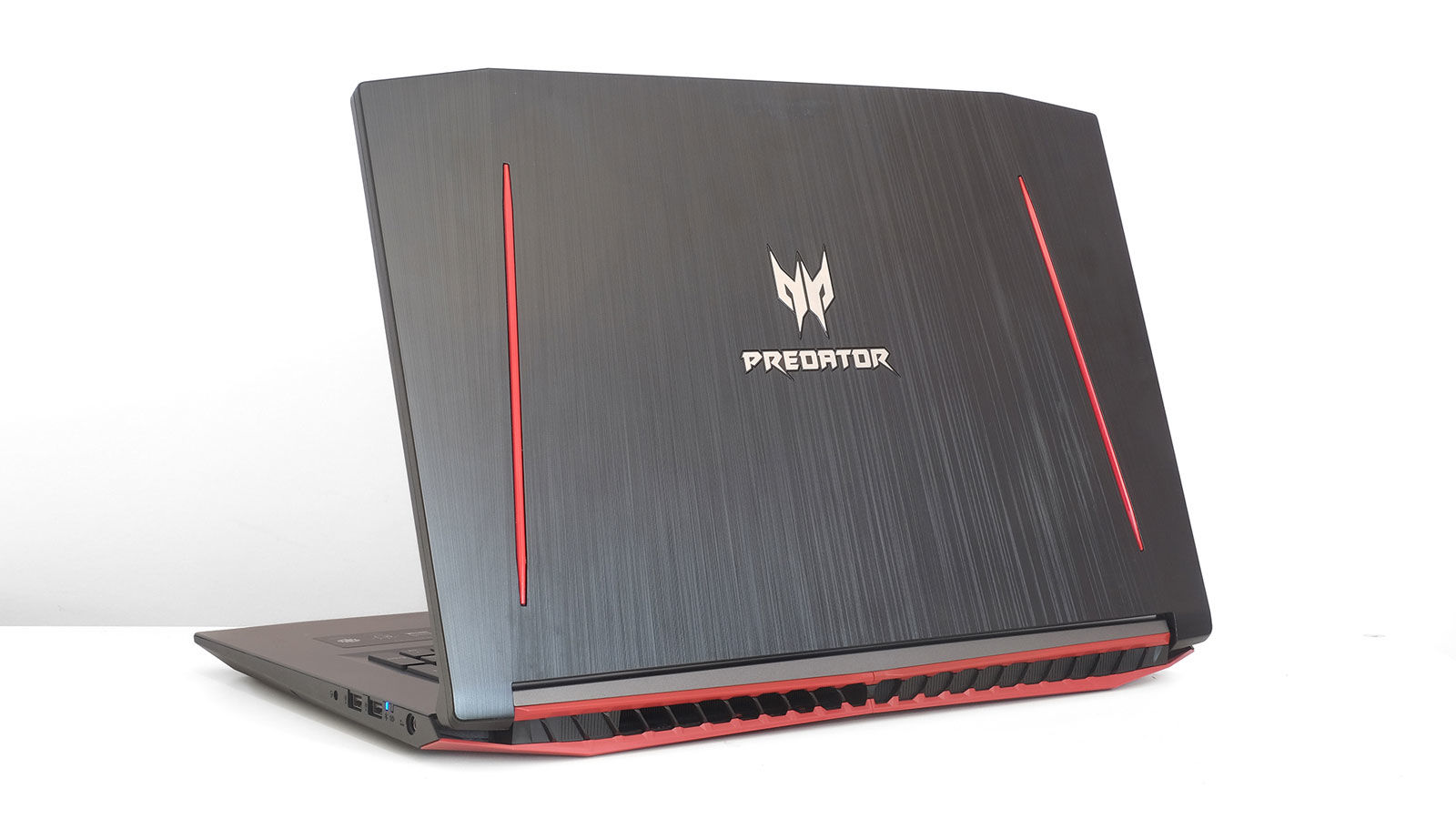 This is an all-plastic laptop, including the brushed metal-effect lid. To confuse things, Acer makes variants of the Helios 300 laptop with a metal lid, although at the time of writing these are only available in the US.

The lid flexes a little more than a top-tier gaming laptop and there’s a hint of flex to the surround below the keyboard. There are no shortfalls that really affect use, though, as the keyboard itself is stiff.

It’s also around 9.5mm thinner and 1.2kg lighter than the Predator 17, but at 3cm thick and 3kg, this is not a portable gaming laptop. But what 17in model is?

Cutting out the optical drive is one reason the Acer Predator Helios 300 is a lot slimmer than its big brother. And the connections are also cut-down, primarily in spec rather than number. 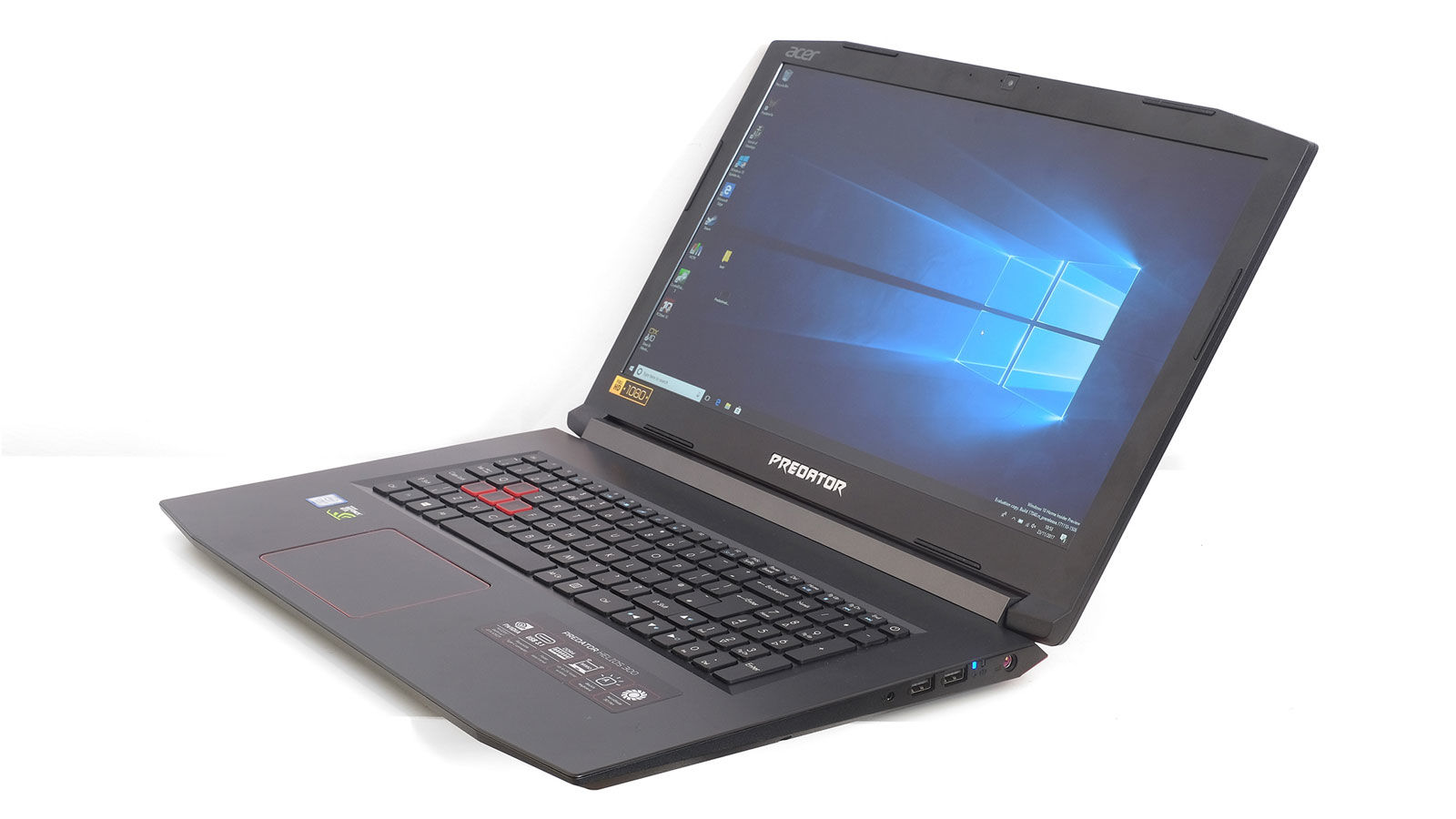 There are three standard-size USBs, only one of them is a USB 3.0. It seems odd to have a £1000-plus laptop that still has USB 2.0s, but if you’re plugging in a mouse the added bandwidth of USB 3.0 is wasted anyway.

The 300 also has one USB-C port, which is specced to the USB 3.1 Gen 1 standard rather than the much faster Thunderbolt 3.0. 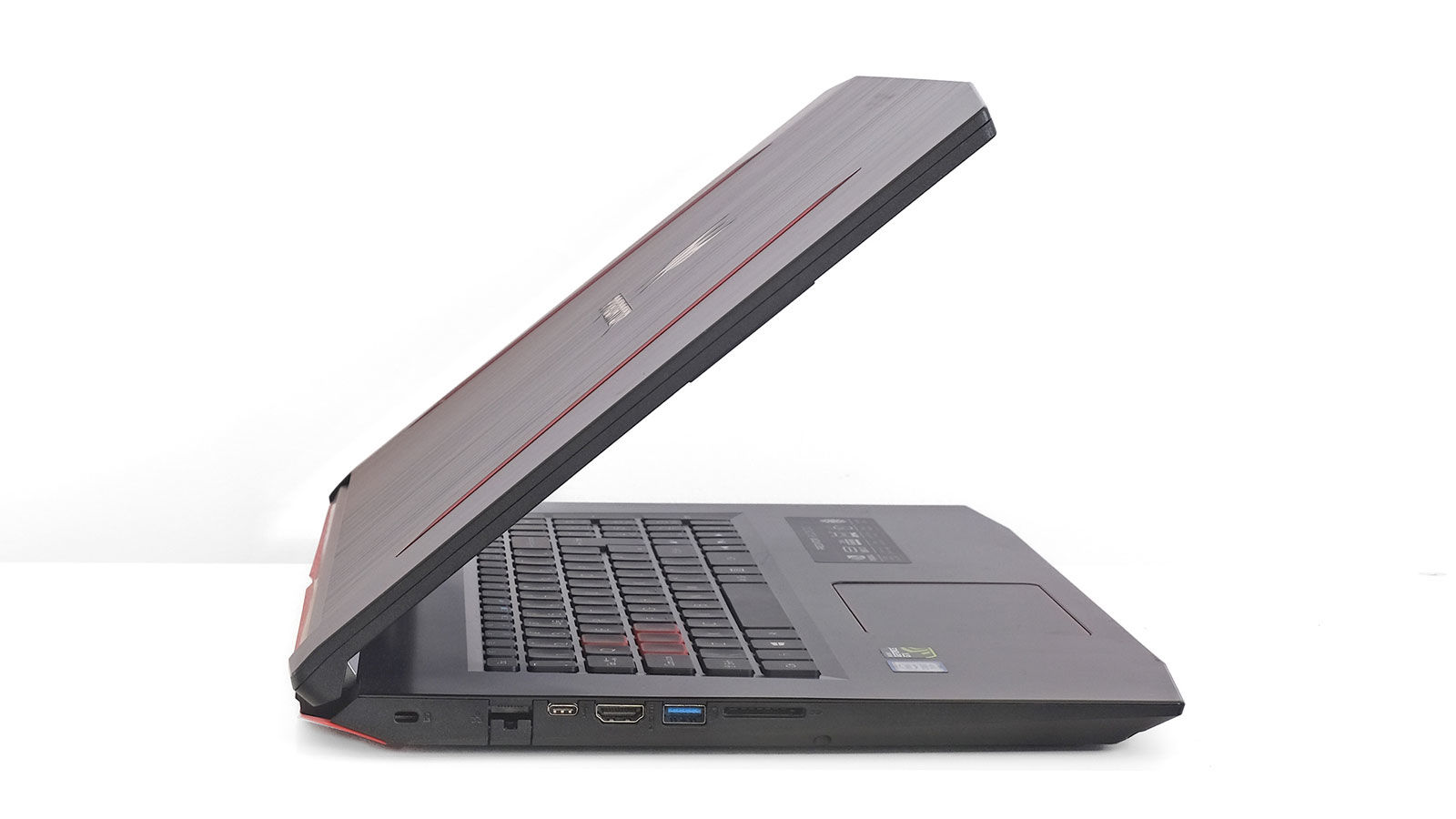 Other connectors include an RJ45 Ethernet port, HDMI and SDXC card reader. There’s everything the average gamer needs, but if you want top-spec ports you’ll have to look at a more expensive model.

Some of the key appeals of the full-fat Predator laptops include a fairly chunky keyboard and a good trackpad with buttons that aren’t built into the pad. With a Acer Predator Helios 300 the setup is more conventional.

There’s a soft-action chiclet keyboard free of macro buttons and a trackpad with integrated buttons. The hardcore gamer crowd may turn their nose up at these, but we think the keyboard is generally fine. 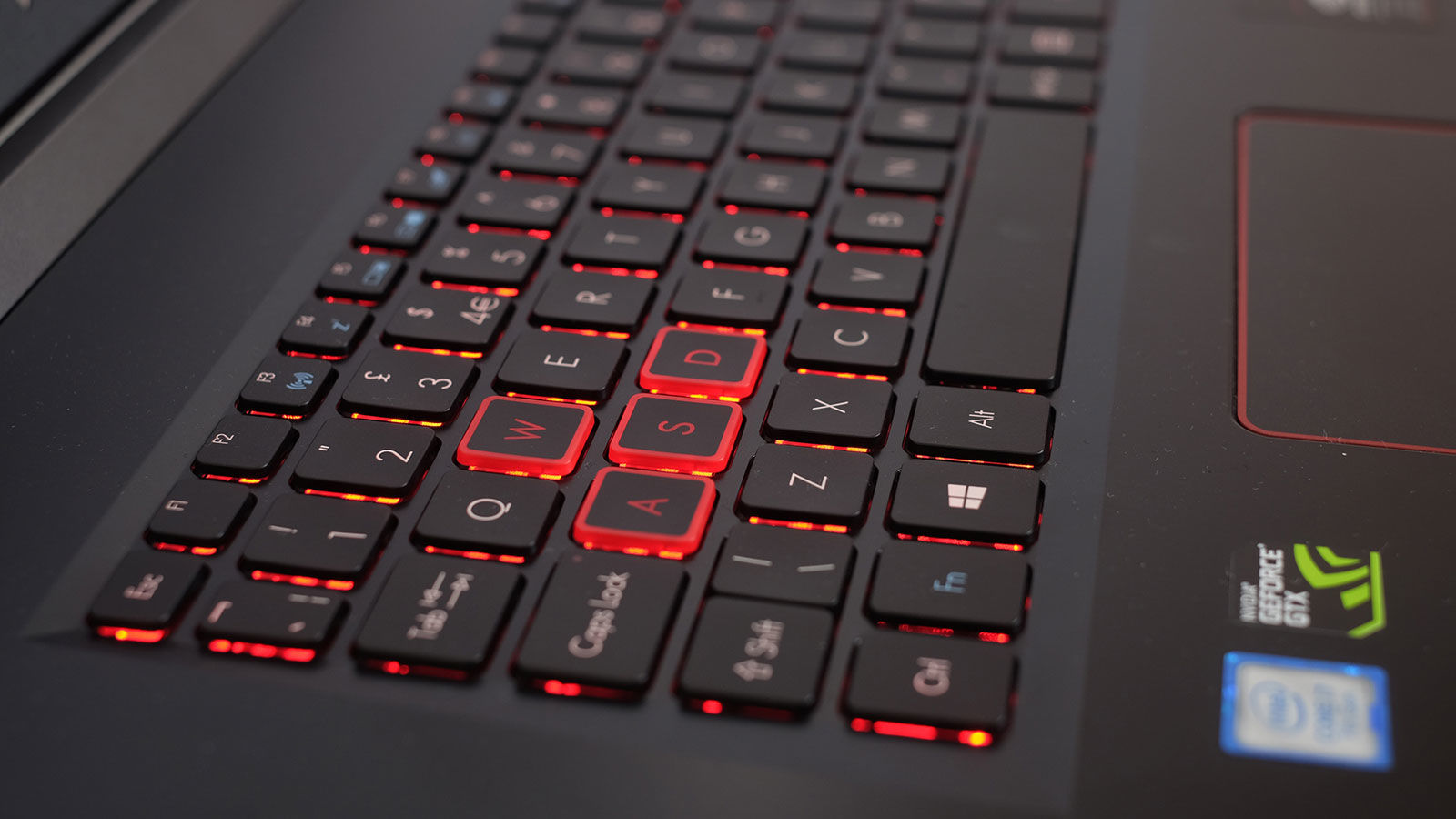 Action isn’t super-deep or notably well-defined among gaming laptops, but it’s comfortable to use. Like the USB 2.0 ports, the prosaic keyboard is just something you have to weigh up against the relatively competitive price.

There are also some typical gamer aspects to the keyboard too, including a red backlight and highlighted WSAD keys.

We’re less keen on the trackpad. Its action is too deep and the feel of the pad too stiff. It’s not great for quick-fire double taps, which is bad news for any sort of competitive gaming. Acer probably thinks most will plug in a mouse. 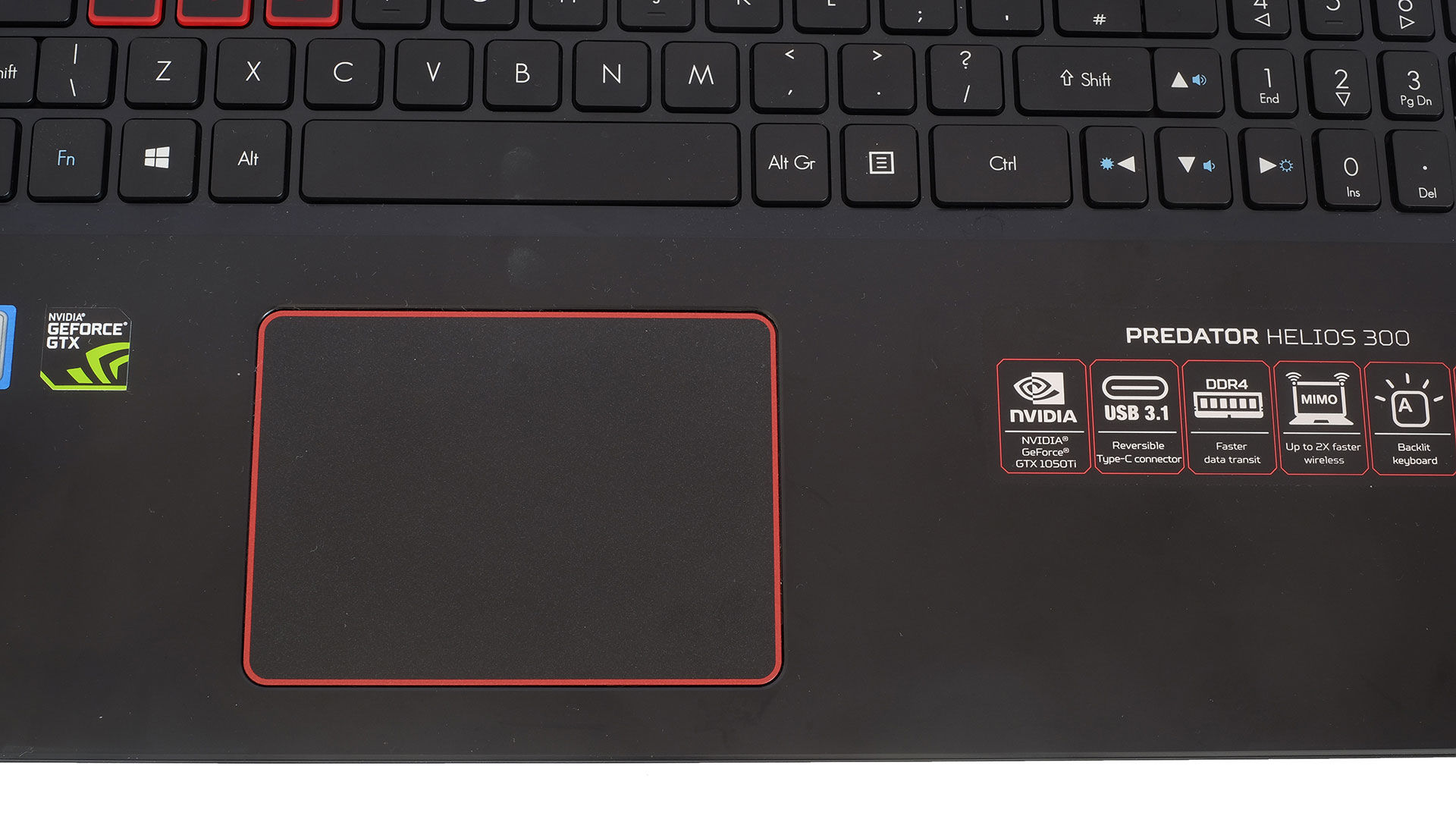 Predictably, given the focus on affordability, it’s a plastic pad rather than a textured glass one too. This offers a less smooth feel, but it’s not light years away from a glass pad in use.

The display is one of the Acer Predator Helios 300’s strongest elements, and a strike against a popular smaller-screen alternative like the Dell Inspiron 15 7000 Gaming (which has a fairly poor TN screen). This is a 17.3in 1920 x 1080 IPS LCD screen with a matt finish. 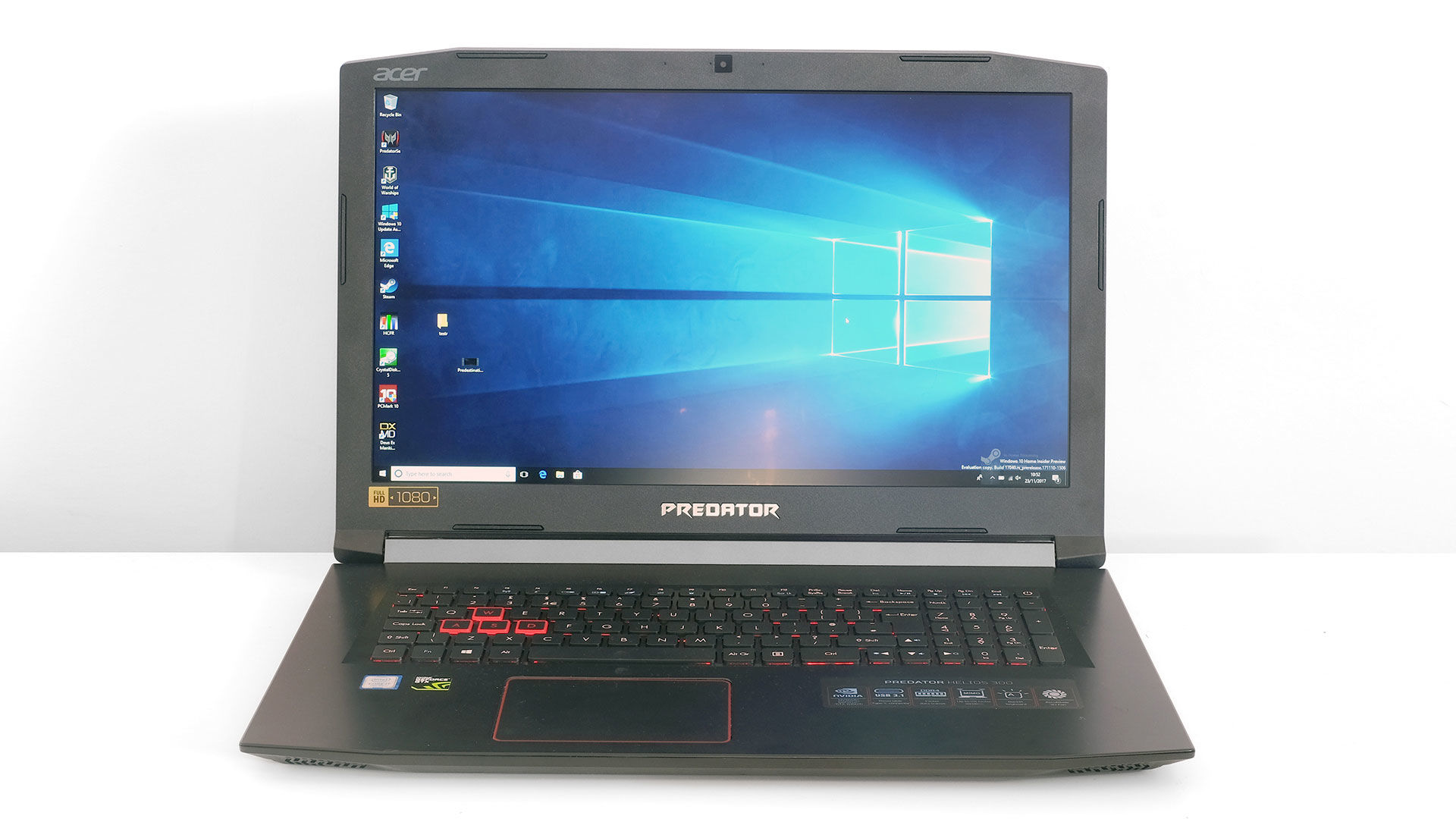 Viewing angles are good, colour reproduction is solid and contrast is commendable in a mid-range model too. While the large surface area shows off the limited pixel density of the 1080p panel, making text look a bit blocky, this is a screen that would’t look out of place in a top-end gaming laptop. 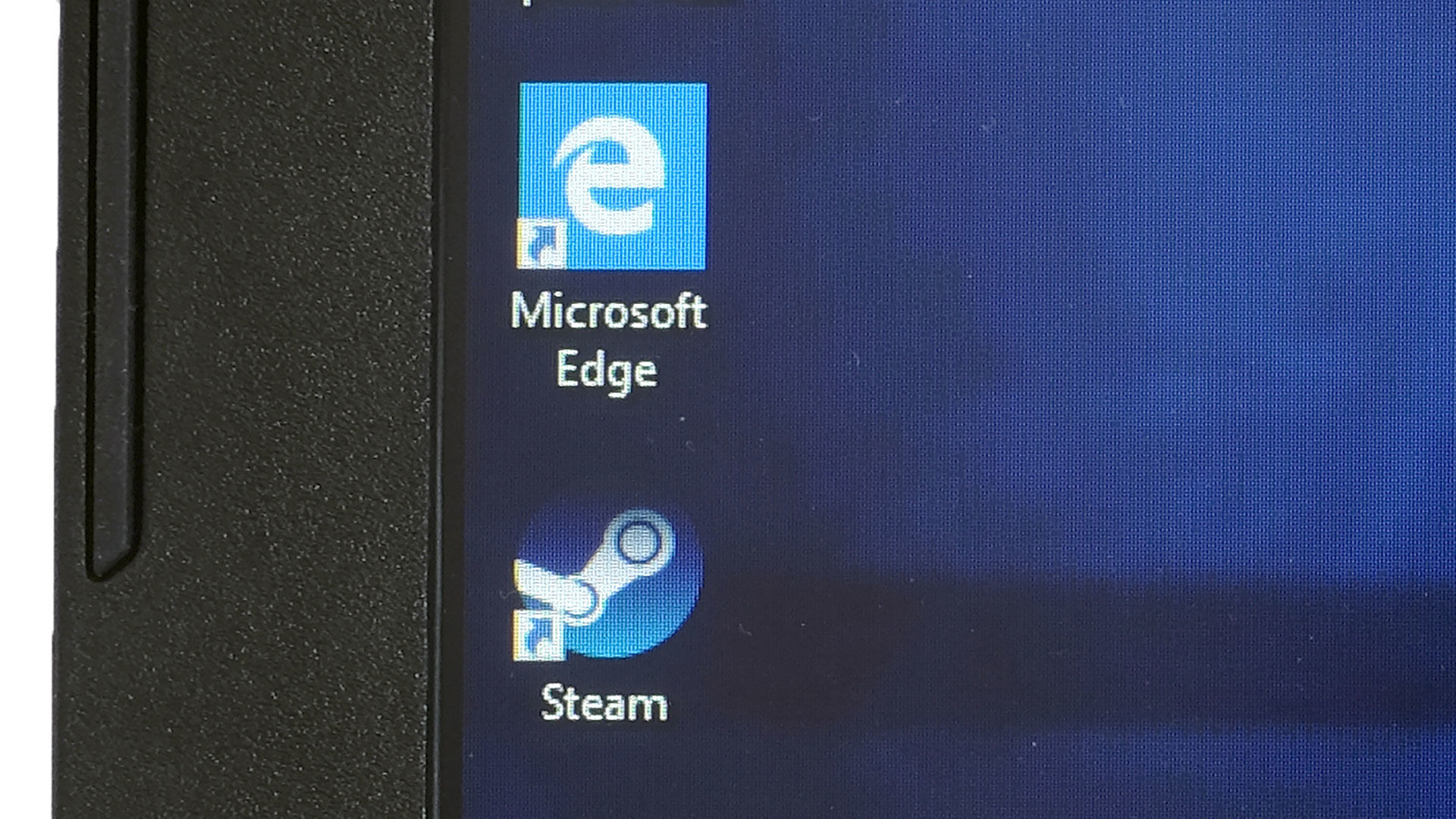 The screen covers 85.3 percent of the sRGB colour spectrum, and has contrast of 838:1. These may not be perfect scores, but to the naked eye are good enough to make the screen appear rich and well-saturated.

For the screen obsessives, it manages 62.4 percent of Adobe RGB and 71.7 percent of DCI P3, the cinema standard.

Maximum brightness is almost unnecessarily high too, at 385cd/m². To get to the 120cd/m² we use for screen testing, as the kind of brightness you might use indoors, you only need to set the brightness to 25 percent.

This is one of the better screens you’ll find in a mid-tier gaming laptop. Like other models in this class, though, it doesn’t have a touchscreen.

As we noted at the start of this review, the Acer Predator Helios 300 spec we’re reviewing is probably not the one we’d buy. It has a slightly odd mix of a high-end Intel Core i7-7700HQ CPU with a small 128GB SSD and an entry-level Nvidia GTX 1050 Ti.

Those who care about gaming performance above all else would be better served by a Core i5 Acer Predator Helios 300 with a GTX 1060 GPU. And a 128GB barely leaves room for one very storage hungry games after a Windows 10 install, such as Deux Ex: Manking Divided, which we use for testing. A 256GB SSD is recommended.

There’s also a 1TB 5400rpm hard drive, but as this is rather slow compared with the SSD you’ll want to install games in the SSD if you can to avoid long load times.

Complaints about this particular spec aside, the Acer Predator Helios 300 gets you very good performance for your money.

The Core i7 CPU results in a PC Mark 10 score of 4206, which will be comparable with an Alienware 17. A Geekbench 4 score of 14479 flattens any slim and light laptop. Such a punchy CPU makes this a very versatile machine, able to take on serious jobs like video editing.

We did notice that on occasion elements didn’t pop up in the Windows 10 Start menu as quick as expected. But with this scale of PC it’s more likely to be down to a minor software issue.

The Acer Predator Helios 300’s GTX 1050 Ti is about as low-end a card we’d recommend for a large gaming laptop like this. And if you can afford the GTX 1060 model, get it. However, as-is this is still a very capable 1080p gaming machine.

It sails through Alien:Isolation, managing an average 95fps with all the graphical effects switched on and resolution at native 1080p. This rockets up to 209fps at 720p, low graphics.

Deus Ex: Mankind Divided is a good argument for that GTX 1060 upgrade, as the Acer Predator Helios 300 averages 26.5fps at 1080p, Ultra settings. That’s too low for an ideal experience when the “min” frame rates are going to be a lot lower.

However, the 720p Low result shows the laptop can still handle just about any game as long as you’re willing to sacrifice the odd element of visual gloss. Deus Ex runs at an average 92.3fps at this setting, so you just have to find a middle ground that you, and the laptop, are comfortable with.

The Helios 300 doesn’t have quite as large a cooling system as the Predator 17, but we haven’t noticed any particularly worrying heat problems when gaming with the laptop. Its underside tends to get warm, thanks to the only mid-size “exhausts” on the back. But the passive cooling is good enough to let the fans switch off when the laptop is idling or performing ultra-low demand jobs.

Under pressure the fan noise naturally becomes quite obvious: time to put the headphones on. However, the noise is not obnoxious.

As with most gaming laptops, the speakers haven’t quite made the same kind of improvements we’ve heard in some much thinner lifestyle laptops. While there’s bulk to the sound, it lacks clarity or any real bass power, instead relying on the mids to make it appear “full”.

Dolby Atmos software is used to bolster this further, although the audio often seems congested. You can switch to the “speech” mode to tone down the effects of the signal processing, but this also reduced perceived loudness.

The speakers are just passable but battery life is really quite poor, and nowhere near the claimed seven hours. Playing a 720p movie on loop, the laptop only lasts 2 hours 30 minutes. This is with the brightness at just 25 percent too.

It’s a result so poor we ran the test a few times just to make sure something hadn’t gone wrong on the initial attempt. You’ll get well under an hour of GPU-testing gaming out of a charge.

You’ll have to weigh up the importance of this yourself. It’s a poor result but as the Helios 300 is clearly a somewhat affordable gaming laptop not a portable one, we haven’t let it impact the overall score too much.