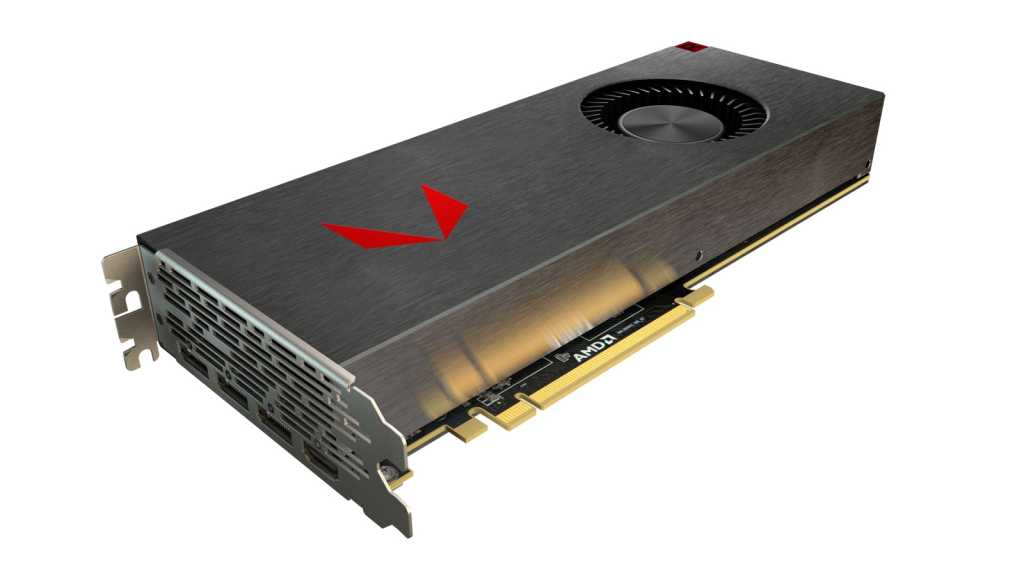 The Radeon RX Vega 56 is a worthy competitor to Nvidia’s GTX 1070, often beating it on both performance and price. It can be a little power hungry and runs rather loud but, if you can find one at recommended price, it’s an excellent value for money card.

AMD’s Radeon RX Vega graphics card fill a long-standing gap at the high-performance end of the range, where Nvidia had for a long time reigned entirely unchallenged. Released alongside the more powerful Radeon RX Vega 64 (and it’s even faster water-cooled version), the Radeon RX Vega 56 is arguably the most exciting of the three boards as it delivers superior performance at a price set to tempt many away from Nvidia. If you can find one for sale, that is.

Have a look at the new Ryzen 3 and Ryzen 5 processors with powerful in-built graphics.

HOW MUCH DOES THE RADEON RX VEGA 56 COST?

As is the case with our Radeon RX Vega 64 review, the RX Vega 56 model reviewed here is an AMD ‘own-brand’ reference board rather than a product you might buy in the shops. At the time of writing, partner-branded boards are available for around £390 inc VAT. This represents a saving of around £80 when compared to the more powerful RX Vega 64.

A warning on pricing

You might struggle to find an RX Vega card at the price we quote. Pricing seems to vary massively depending on availability and if you’re not careful you could end up paying way over the odds for a board. We’ve seen standard RX Vega 56 card selling for over £500, which is more expensive than a GeForce GTX 1080. The reason seems to be that the cards are in high demand for ‘mining’.

The Radeon RX Vega 56 is a cut-down version of the RX Vega 64 and is therefore very similar both internally and externally. In their reference designs, both cards appear as very boxy, yet not unattractive devices, with reassuringly high build quality featuring a metal housing with a single built in fan and a full-length metal backplate.

The 28cm long dual-slot board features four monitor outputs, including three DisplayPort 1.4 and a single HDMI 2.0b connector. These allow ‘Eyefinity’ multi-monitor setups, 4K displays and HDR. Notably absent is a DVI connector, but you can hook up a DVI monitor via an adapter if you need to. It also requires two 8-pin PCI-E power connectors next to which is a row of LEDs programmed to indicate GPU performance.

RX Vega 56 specs are pretty much identical to the RX Vega 64 except that it has, as its name would suggest, 56 compute units enabled rather than the full 64 compute units of the flagship model. The board is rated at a relatively high 210 Watts.

Like its bigger brothers, the RX Vega 56 has 8GB of AMD’s ‘HBM2’ high bandwidth memory, which in this board delivers up to 410 GB/s Vs. 484 GBs on the Vega 64. This represents a welcome doubling of the 4GB available on the previous ‘RX Fury’ boards and finally allows AMD to compete with equivalent Nvidia boards on total memory. AMD’s new High-Bandwidth Cache Controller (HBCC) also allows the RX Vega boards to access your PC’s system memory at high speed, potentially giving your games access to huge amounts of total RAM.

The RX Vega also brings support for DirectX 12.1 rather than 12.0 supported by the RX 5xx series and will also allow more high resolution displays to be connected at the same time. For example you can now hook up three 4K monitors at the same time, all running at 60Hz.

The Radeon RX Vega 56 is a big step up from the Radeon RX 580, and only a little behind the more expensive Radeon RX Vega 64. This places it in an interesting position a little ahead of Nvidia’s GTX 1070. This appears to be the motivation behind Nvidia countering with the new GTX 1070 Ti.

In our tests, the Radeon RX Vega 56 trades blows with the GTX 1070 and often outpaces it. This means solid performance at 2560×1440 with 60 fps and you could even have a go at 4K resolutions, especially if you’re playing on a 30Hz TV rather than a 60Hz monitor. If you’re looking to buy a compatible display for your new graphics card, cheaper FreeSync monitors are also a factor to take into consideration as you’d have to pay more for a G-Sync monitor compatible with an Nvidia card.

When comparing against the RX Vega 64, we see approximately 10 per cent lower performance but at a much more competitive price. This means you’ll be able to play the same games at roughly similar settings while saving a fair bit of money, and this is what will make the RX Vega 56 card a better value-for-money option for many gamers – as long as you can actually find a board for sale anywhere near the recommended price.

We did find that the card gets very loud under load as that single fan whips up to full speed. However, the RX Vega cards can be significantly tuned and tweaked via the Windows driver software, not just for the usual overclocking but also for controlling power consumption. Many users have found they’re able to reduce the total amount of power required by ‘undervolting’ the card, resulting in cooler and quieter operation than you’d get with the default configuration.

Should I buy the Radeon RX Vega 56?

Unfortunately for AMD the RX Vega 56 is currently very hard to find, and when you do, it can often be at such an inflated price that it makes no sense to buy one. However, if you can find one for sale near RRP it makes a very good value for money proposition as its performance is close to the RX Vega 64, but at a much lower price.

It’s also very competitive with an Nvidia GTX 1070 in terms of price and performance. If you really need more speed, there’s the RX Vega 64 or Nvidia’s GTX 1070 Ti but you may not end up getting as much bang for your buck.

Another consideration is that the RX Vega 56 can draw quite a lot of power and requires a reasonably beefy power supply to run properly. It’s single-fan design also means it can make a lot of noise under load. A GTX 1070, especially with a third-party high-performance cooler, will make considerably less noise.