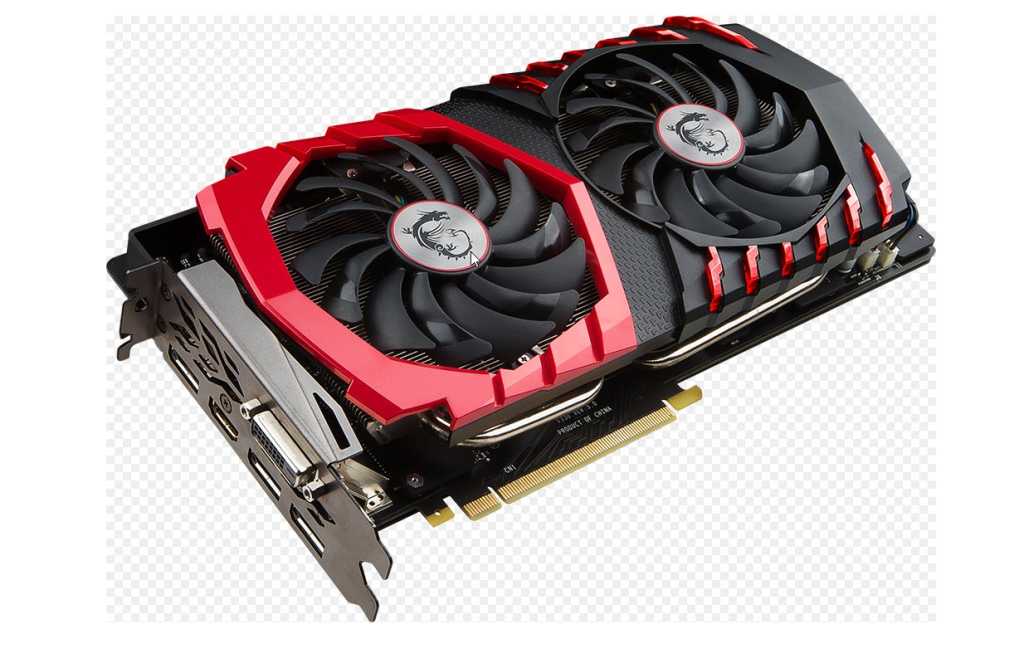 The MSI GeForce GTX 1070 Ti Gaming 8G delivers performance between a GTX 1070 and a GTX 1080 and its upgraded PCB design and cooling system makes it suitable for significant overclocking. However, there are no factory-overclocked modes available on this or any other GTX 1070 Ti. You’ll get cooler, quieter operation, but to you’ll need to manually overclock the board to get the best value for money. If you’re prepared to do so, this this board will give you near GTX 1080 performance at a significantly lower price.

Featuring Msi’s well-established dual-fan ‘TwinFrozr VI’ cooler and a custom-designed logic board, the MSI GeForce GTX 1070 Ti Gaming 8G differs significantly from Nvidia’s reference or ‘Founders Edition’ design, delivering extra performance and quiet, or even silent, operation. It has bags of potential, but you’ll have to overclock it yourself to get the best out of it.

MSI’s Gaming 8G has a recommended price of £469.99 and is currently available at that price from scan.co.uk.

If you’ve seen any of MSI’s Gaming-series graphics boards before, then this new model will hold no surprises. Finished in black and red, it features a custom PCB design topped with MSI’s familiar dual-fan ‘TwinFrozr VI’ cooler. It looks exactly like the GTX 1070 Gaming X 8G, in fact. 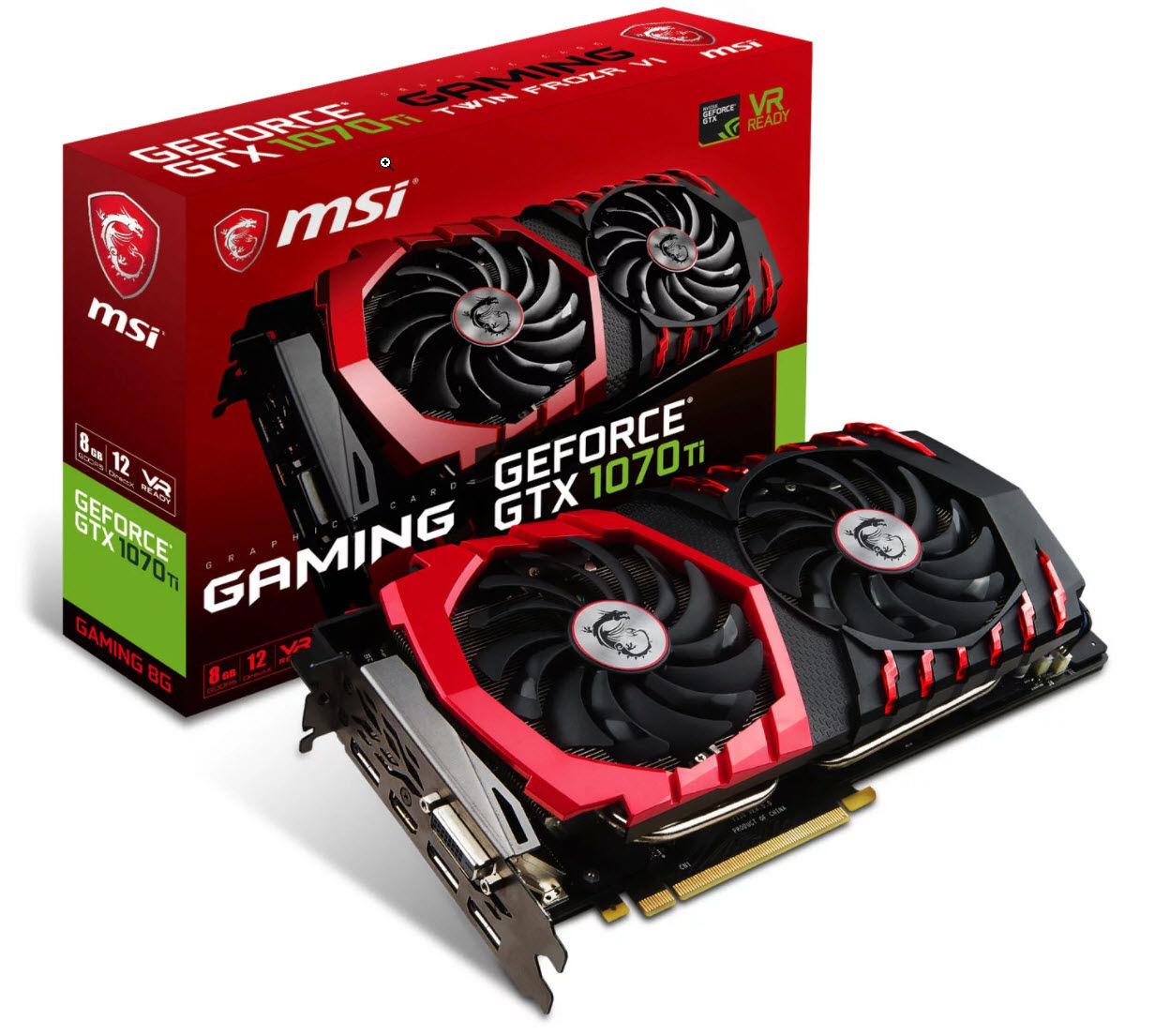 These hardware changes give the board several advantages over Nvidia’s standard Founder’s Edition design, including quieter fans and better cooling performance. As usual, these fans will turn off entirely when not needed, resulting in entirely silent operation. It also features a ventilated metal backplate to protect the card from knocks and scratches while helping it to keep cool.

The Founder’s Edition 1070 Ti boards use a single 8-pin power connector, but this MSI board adds a second 6-pin connector to allow for the extra power requirements of overclocking.

The board needs a case large enough to accommodate a 2.5-slot width and 279mm length. It has three DisplayPort 1.4 connectors along with a single HDMI 2.0 port and a Dual-Link DVI socket for older displays. It also supports multi-card configurations via standard pair of SLI connectors at the top.

The eye-catching red and black design, combined with the prominent exposed heatpipes of the custom cooler give the MSI a distinctive look which is made all the more striking by its RGB LED lighting which can be customised using the supplied software to perform a variety of effects in a full rainbow of colours – perfect for viewing through the transparent side window of your favourite gaming PC case.

At the heart of the board is, of course, an Nvidia GeForce 1070 Ti processor, but what is it and why should you consider buying one?

The short answer is that it’s very close to a GTX 1080. It’s so close, in fact, that Nvidia has had to take steps to limit its performance to ensure that it doesn’t encroach on the GTX 1080’s territory. So why would Nvidia make such a card in the first place?

Following Nvidia’s long-established naming convention, the GTX 1070 Ti slots in above the standard GTX 1070 and below the former consumer flagship, the GTX 1080. All of these cards are based on the same ‘GP104’ graphics processor, but are differentiated from each other by the enabling or disabling of internal graphics cores and external features such as memory support and clock speeds.

Creating a new graphics processor at this performance point gives Nvidia a direct challenger to AMD’s Radeon RX Vega 56, which launched with performance a little higher than a standard GTX 1070. The GTX 1070 Ti therefore gives loyal customers a viable Nvidia alternative without having to pay extra for the more expensive GTX 1080.

Nvidia creates the lower-spec models, by starting with a GTX 1080 and disabling the required number of cores at the factory. During manufacture, some chips inevitably fail to produce a full set of working cores, but still have enough functional ones to become a lower-spec card.

The GTX 1070 Ti could also, therefore, function as a way for Nvidia to achieve a better financial return on any GP104 chips which produce many more working cores than a GTX 1070 would need, but don’t quite make the grade to become a GTX 1080. They all cost the same to make, so with the new 2432-core designation, Nvidia can now sell these chips at a higher performance level and charge more money for them.

To further differentiate the product and cut manufacturing costs, The GTX 1070 Ti, uses the slower GDDR5 RAM found in the GTX 1070 rather than the faster, and more expensive, GDDR5X ram of the GTX 1080.

Even so, Nvidia has decided to limit the card still further by insisting that all boards ship with clock speeds set at 1,607MHz, with a boost speed of 1,683MHz. This applies not only to Nvidia’s own Founders Edition boards, but to third-party boards such as this one from MSI too. You may notice that 1,607MHz is the same base clock speed as the GTX 1080, although the boost speed is somewhat lower than the 1080’s 1,733MHz.

Gone then are the user-selectable ‘silent’, ‘gaming’ and ‘OC’ modes available on some GTX 1070 and GTX 1080 versions of MSI’s board. You can still overclock the board manually, but this time there are no versions of the board which ship with higher pre-set clock speeds.

This means the MSI GeForce GTX 1070 Ti Gaming 8G has all the hardware needed to achieve great overclocking performance, but the upgraded power inputs and high-performance cooler won’t be getting you a single extra fps unless you overclock the board yourself.

MSI’s Afterburner software is available to help you do this but, out of the box, this board will perform much the same as any other GTX 1070 Ti card, although you will benefit from its quieter and cooler operation which can also help prevent any performance throttling which could otherwise occur under heavy load.

There are no prizes for guessing how the MSI GeForce GTX 1070 Ti Gaming performs. In our tests, conducted without overclocking, it sits above the GTX 1070 and a behind the GTX 1080, right where you would expect. It’s also a pretty close match for the AMD Radeon Vega 56, depending which architecture your favourite games are optimised for.

This means solid performance at around 60fps in challenging modern titles at 2560×1440 resolution with ‘high’ or ‘ultra’ settings, depending on the game.

Overclocking the board will gain you a little extra performance. It may not make a massive difference to gameplay, but you’ll be able to feel a little smug knowing that it can reach the performance levels of a stock GTX 1080. With only minor overclocking on the core clock speed we achieved a 3D Mark Time Spy score of 7,284 which beats the GTX 1080 Founders Edition at stock speeds.

We noted a tiny bit of ‘coil whine’ during testing, but far less than on many other boards, especially compared to many AMD-based alternatives.