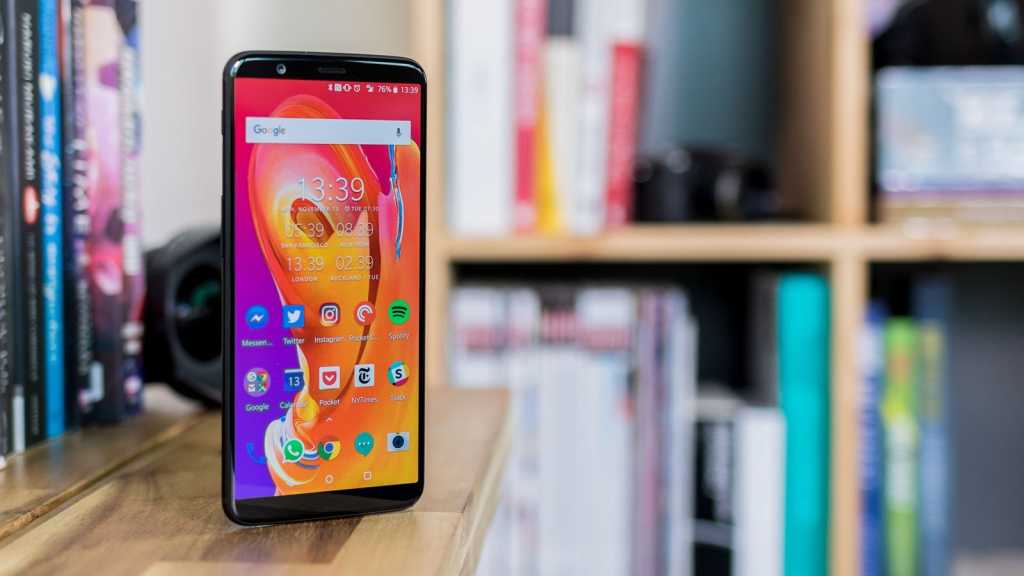 You know what you’re getting with the iPhone 8, as it remains very similar to the last few iterations from Apple. Performance is fast and fluid, the cameras are some of the best around, and iOS has also had a bit of spit and polish to make it feel more modern. It doesn’t have the wow factor of the iPhone X, but it’s a very solid device that sticks to the blueprint that has proved so extremely successful in the past.  OnePlus continues to impress with not only its hardware, but also the pricing that remains the right side of £500. Even if you opt for the most expensive model you’ll still be paying £200 less than the cheapest iPhone 8. For that money, you get a fantastic flagship phone, with specifications that should keep it in fine fettle for at the very least a couple of years. It’s frankly ridiculous that you can get a phone this good for this kind of price, and we strongly recommend that you do.

OnePlus has built a solid reputation for top quality smartphones at sensible prices. Its latest model is the OnePlus 5T, which looks set to continue the trend set by its predecessors. But, how does it compare to the iPhone 8, another handset that is certain to be in demand this winter? We take a look.

OnePlus is known for customer-friendly prices, and the 5T is not about to blot the copybook is this department. At £449 for the 64GB version and only £50 more to double the storage, it’s a lot of phone for the money.

There is one drawback though, in that the 5T is available to order only on a monthly plan from the O2 network. So, if you have a different carrier you won’t be able to buy it as part of your tariff.

Apple places no such restrictions on its iPhone 8, which you’ll find for sale pretty much everywhere. The new model comes with two storage options, 64GB (£699) or 256GB (£849), while there’s also the iPhone 8 Plus for those who want a larger display. The latter follows the same pattern for storage, with the 64GB version costing £799, and the 256GB a whopping £949.

The iPhone 8 will feel immediately familiar to anyone coming from the iPhone 6, 6S, or 7, as the design has stayed pretty much the same for the past few generations. It seems that Apple was holding back any new flourishes for its iPhone X.

This is presumably down to one major change – the glass back. Apple’s decision to include this material brings with it the welcome introduction of wireless charging on an iPhone.

This is accompanied by the even more welcome fact that it’s compatible with Qi standard chargers rather than some Apple proprietary system.

A headphone jack hasn’t reappeared, sadly, so you’ll have to make do with the Lightning earbuds included in the box. Strangely, one thing that has remained is the Home button.

While most smartphones have moved them to the back so that the front panel can fill the majority of the space, Apple’s adherence to its older design means that the iPhone 8 still bears large bezels at the top and bottom, with the lower one housing its ubiquitous button.

True, the iPhone X has brought Face ID to the table, and this should pave the way for future iterations, but right now the iPhone 8 appears quite dated and boxy compared to its rivals.

The OnePlus 5T suffers no such baggage, as it relocates the Home button/Fingerprint scanner to the rear, freeing up the majority of the front panel for its large display.

Construction is metal for the chassis, which does mean there is no wireless charging on offer here. Waterproofing is a more concerning omission, with OnePlus offering none at all.

This is a stark difference to almost all flagship phones this year, and compares poorly to the iPhone 8, which arrives replete with an IP67 rating to confirm that it will survive a few spills or quick dips.

The OnePlus 5T is slightly larger than its Apple rival, measuring 156.1 x 75 x 7.3mm, and weighing in at 162g. This is primarily due to its larger display, but the increased girth does mean that for comfortable use you’ll want to employ two hands.

A headphone jack has sensibly been kept on-board, and the USB-C port supports rapid charging from the included Dash Charge power supply. OnePlus boasts that plugging the 5T in for just 30 mins will give it enough power to last a full day.

The iPhone 8 also supports fast charging, but doesn’t include a power supply that offers this feature in the box. Not great when you consider how much the contents of the box cost.

Both devices are slippery buggers, and with the prices involved we’d advise using cases to avoid any unwanted trips to the glaziers. See our round up of best cases for the OnePlus 5T.

Apple has continued with its tried and tested 4.7in 1334×750 resolution IPS panel. This time around there’s the added feature of True-Tone, the subtle enhancement that measures ambient light in a room to optimise the brightness and colour temperature of the screen, and a wide colour display.

The OnePlus 5T packs an almighty 6.01in Optic AMOLED panel, furnishing a 2160×1080 resolution that stretches across its 18:9 aspect ratio. Basically, it’s a bit taller than most phones and looks great.

The OnePlus 5T comes equipped with dual-cameras: a 16Mp and 20Mp combination both with f/1.7 apertures. Low-light performance is a feature of which OnePlus seems very proud, and that’s easy to see why when you begin to take shots after the sun goes down.

4K video capture at 30fps is available, with EIS there to smooth out the bumps.

iPhones are renowned for their cameras, but competition has been getting tougher in recent years. This can be seen by the fact that the iPhone 8 only has a single main shooter, bearing 12Mp, an f/1.8 aperture, and OIS.

Apple has long been able to coax superior performance out of seemingly humble specs though, and the iPhone 8 camera is one of the only ones around that can record 4K video at 60fps. It also handles slow motion impressively, by shooting in 1080p at 240fps.

Whichever phone you choose, you’ll be getting some very decent results in your photo and video galleries.

The 5T packs a SnapDragon 835 processor and 6GB of RAM into the 64GB model. This increases to 8GB of RAM for the larger storage option.

Either combination will provide ample speed when navigating your way around the system, playing games, and general daily tasks.

Apple has introduced a new generation of processor for this year’s iPhones, dubbed the A11 Bionic. 2GB of RAM is fitted as standard in the iPhone 8, which does seem paltry in comparison to the 5T, but again Apple’s optimisation techniques ensure that things flow very smoothly indeed.

Here’s a detailed breakdown of the technical specifications for both devices;

The iPhone 8 comes with Apple’s latest iOS 11 release. This was a much-needed update to the operating system, bringing with it a redesigned control panel, App Store, and several refinements to the general workings.

It’s not been without problems though, with several rushed updates fixing issues but appearing to cause others. Battery life was a main victim for some, but you can expect Apple to get a handle on it quickly.

We were a little disappointed to see that the OnePlus ships with Android 7.1.1 rather than the new version 8.0, also known as Oreo. Hopefully this will only be a short wait, and in the meantime the Oxygen OS skin that OnePlus implements is still a clean and easy to use interface.

If you’re a fan of iOS then the iPhone will deliver everything you’ve grown to expect from the platform, while Oxygen OS is a light touch that gives users a close to stock experience of the excellent Android operating system.