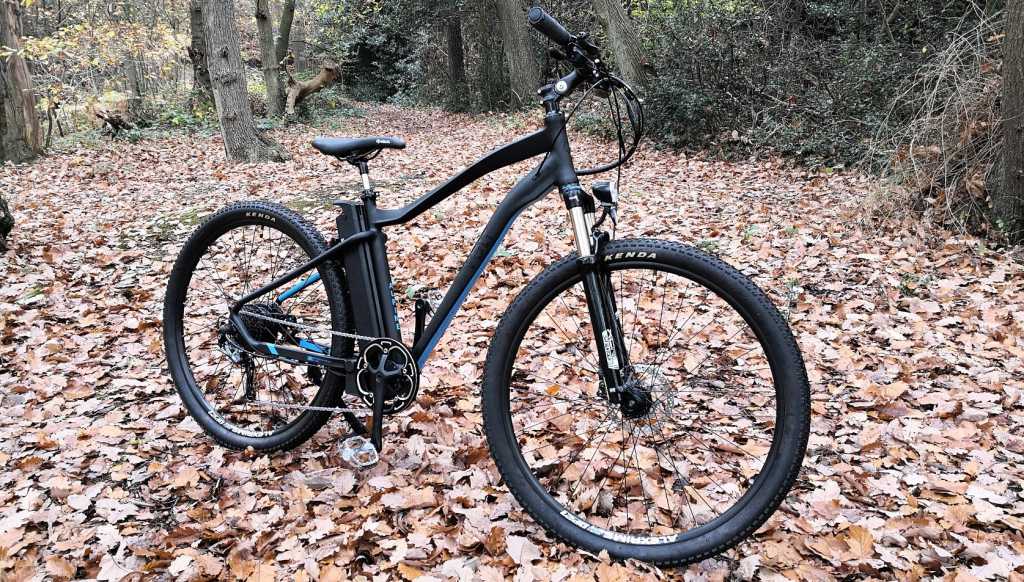 The Volt Alpine is very well built, great to ride on- and off-road and has decent range even with the smaller battery. The motor is powerful enough for riding at 20mph, too. It’s pretty heavy at 23kg, though, and comes in just one frame size. Thanks to the fact you can test ride, you can check if you’re happy before buying.

There was no doubt left in my mind after riding a Volt Alpine for a couple of weeks: electric bikes are the future.

Battery-powered bikes have been around for several years, and they’re slowly starting to creep into the mainstream. Volt Bikes is a UK-based manufacturer and has a wide range of electric bikes from folding and commuter bikes right up to the hardcore Bigfoot.

The Alpine sits roughly in the middle of the range, which starts at around £1200: these aren’t cheap bikes.

You can buy it from  Electric Bike Store for £1499 but it’s also available tax-free through the  cycle to work scheme which, depending on your salary, can make the final cost closer to £1000.

It’s a hardtail mountain bike with Shimano disc brakes and Tektro mechanical levers, so it stops as hard as it goes. In the rear hub is a 250W SpinTech motor which is powered by a massive Panasonic battery pack which slides in behind the seat tube.

You control it from a handlebar-mounted display which lets you choose between four power assistance modes, plus auto which attempts to figure out how much assistance you need at any given time. The display also acts as a bike computer, displaying trip distance, max speed and other stats.

There’s just one chainwheel at the front and eight gears at the rear, provided by a Shimano Alivio setup. Eight gears doesn’t sound much compared to the 30-odd you get on some mountain bikes, but it is plenty with the torque you get from the motor.

Those distances are on the flat in warm conditions, so just as with electric cars, actual range will be shorter if it’s cold and you’re using maximum power and there are lot of hills.

Recharging takes about 3-4 hours, and you can unlock the battery with a key, slide it out (you have to remove the seat first) and then charge it indoors – something you can’t do with some electric bikes.

The smaller pack weighs 3.2kg, and the larger one 4.4kg. It certainly makes this 19in bike a hefty old thing, and it requires some strength to lift its 23kg into a car boot – lifting it onto roof bars is a two-man job.

The front wheel has a standard quick-release mechanism, and the rear wheel is also easy to remove once you’ve unplugged the motor cable.

Riding the Alpine is a revelation. Its weight gives it great stability at higher speeds, and I found it was possible to cruise along at 20mph with ease on the flat – faster than the claimed 15.5mph.

Hills reduce this speed, but you can still make great progress with very little effort even on steep (10-12 percent) inclines.

Unlike some of the electric bikes we’ve seen, you do have to pedal the Alpine in order to get assistance. There’s a thumb throttle, but you can’t use this without pedalling due to UK law. It will allow the bike to travel at 4mph without pedalling to help you get started, though.

You can also use it to get extra assistance in modes 1, 2 and 3 when cycling along, but it appeared to have no effect in the top 4 mode as you’re already getting maximum power.

What’s great is that the acceleration kicks in quickly once you start pedalling and the modes aren’t gears: you can set it to 4 and get up to 20mph in just a couple of seconds.

Power cuts as soon as you stop pedalling, so you never feel like you’re out of control or having to brake against the force of the motor.

Offroad is arguably where the Alpine is at its best. That sounds obvious, but as well as being a well set-up mountain bike, it really takes the pain out of climbing hills and letting you enjoy the downhills. Certainly, few will be able to keep up with you going uphill.

The Suntour NCX fork soaks up the bumps, but you can lock it out for road riding.

Thanks to the various modes you can choose how much effort to put in, and also allow you to conserve battery power. And you can ride with the power turned off completely, or when the battery is flat. It’s then that you realise how much help you get from the motor.

It’s difficult to convey exactly how it feels riding the Alpine compared to a standard mountain bike, but it’s hard to go back to a standard bike once you’ve felt the benefit of an electric motor: it makes all cycling enjoyable, even when there’s a nasty headwind when you’re going up a steep hill.

If there’s a disadvantage beyond the extra weight, it’s that the massive battery makes it obvious from a distance that it’s an electric bike and I never felt comfortable locking it up and leaving it.

But if you’re not put off by the price and you don’t need to leave it locked up in public, you won’t regret buying an Alpine.