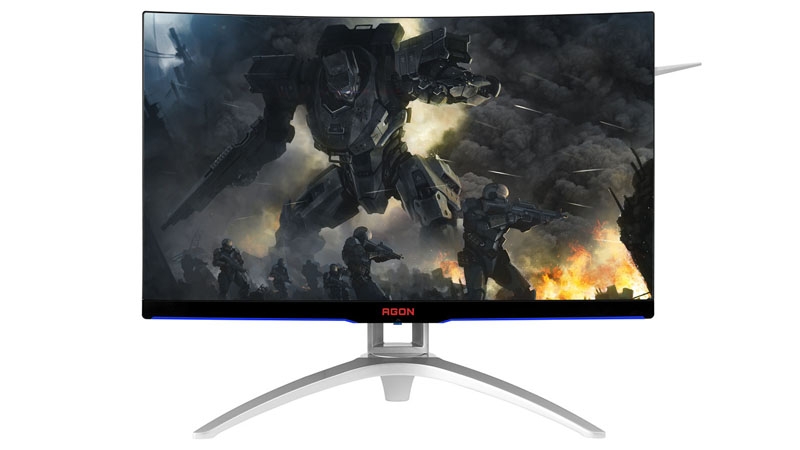 As 1080p curved 144Hz gaming screens go, this is a great one for those that own an AMD GPU. It might seem expensive for a 1080p resolution panel, and it is a little. But, the 144Hz refresh rate, FreeSync, curved aspect and the excellent colour gamut do much to counterbalance the cost argument. A higher resolution curved gaming screen this size is going to cost 30% extra or even more, and based on what GPU they have, this might be a better fit for many systems.

For most gamers, their PC has been a major investment in every department. Probably the last thing they consider on their ultimate gaming PC bucket list is the monitor, even if that piece of the jigsaw exerts a major influence on their overall experience.

AOC prides itself on delivering affordable solutions, and its new Agon AG272FCX is specified to provide gamers with a feature-filled option at a realistic price.

Note: This monitor has now been replaced by the AOC Agon AG272FCX6, which is not only better but cheaper.

Where to buy AOC Agon AG272FCX

The RRP of the AOC Agon AG272FCX in the UK is £389, although you can find it for £339 from online retailers including Amazon UK and Currys. The USA arm of AOC chose not to market this model stateside, unfortunately.

One of the few competitors in this narrow slice of the gaming market is MSI, with its £299 MSI Optix G27C. It has the same resolution, 144Hz FreeSync capability and offers a DVI input into the deal.

In deciding if the AOC Agon AG272FCX is good value for money, let’s first look at the features.

Out of the box, the screen and its support are separate, and the first job is to assemble the two parts using the screws provided. While the mounting point is custom, the screw layout is VESA 100, so you can independently mount the AG272FCX if you wish.

The support is milled from solid chunks of aluminium, and once the screen connected the combined assembly seems remarkably stable and robust.

A useful AOC touch is that the support has a carry handle on the top, making moving the monitor easier than many other designs we’ve covered.

The only limitation of the support design is that it doesn’t allow for twist rotation (i.e., portrait mode), though it pivots 30 degrees, tilts 28 degrees back and -5.5 degrees forward, and translates 11cm vertically. There isn’t any cable management as such, other than a few large gaps to poke wires through.

In an attempt to keep the weight of the screen element low, AOC went with an external power block that appears borrowed from a gaming laptop. Our preference is for integrated PSUs, but this one comes with enough cable on either side of it to give lots of options about where you place it.

Lighting has been placed along the front lower edge, left and right of the logo, and in four stripes on the rear. These lights can be globally set to Red, Blue or Green and three levels of brightness. Which begs the obvious question, if they used three LEDs why didn’t they make is RGB controllable for an even wider range of colours?

The inputs are all in clustered on the rear, including two HDMI 2.0 ports, a single DisplayPort 1.2 and a VGA input. Along with the video inputs are is a USB uplink two USB 3.0 downlinks, and also Audio out and Microphone in/out.

A slightly odd aspect of the USB is the uplink connection to the PC doesn’t use the typical type-B USB receptacle. Instead, AOC repurposed a USB 3.0 Micro-B SuperSpeed plug for the same job, which is technically acceptable.

However, that’s not a wise choice in our book. Because while type-B plug cables are widely available, where long ones with Micro-B on them aren’t, should you misplace it or break the one AOC included.

Another curiosity is a small gizmo that they’ve included that avoids the need to fumble for hard to find control buttons on the bevel. The QuickSwitch as AOC called it, is a small trilobite shaped control pad connected to the screen by a short cable.

While a markedly different approach to settings control, considering how elaborate they made the QuickSwitch’, wouldn’t it have been easier to have made it wireless?

The QuickSwitch allows you to access the OSD that is a mix of the finer calibration controls and also AOC’s special settings for various game types.

The menu can also set the flicker-free and AOC Low Blue Light Filter modes that are mostly designed for when you are using the screen for non-gaming activities.

The one toggle that many gamers will gravitate towards is ‘Low Input Lag Mode,’ reducing the decoding cycle for less lag. Though, selecting ‘Racing,’ ’FTS’ and ‘RTS’ game modes also has this impact and also makes some other settings adjustments in a single stroke.

Unusually for a curved screen, AOC put a couple of 3-watt speakers in this model, so you don’t need speakers or headphones to hear something. For headphone owners, they also included their motif spike that can be rotated out to provide somewhere for you to hang them between sessions.

Completely out of left field we’d also like to mention the internal speakers on this design that unexpectedly produced some acceptable sounds. Having suffered some angry-bee-trapped-in-a-tin-can audio from monitors for many years, the ones AOC put in here didn’t make our ears bleed.

Given that it has for a long time been an easy jibe for those that review monitors, it’s good to see that AOC has finally decided to do something about monitor audio.

But, we’ve been dancing around the periphery of the AG272FCX, because gaming monitors are mostly about the display.

While a few companies are making curved TN and IPS panels, the best ones we’ve experienced so far are VA (Vertical Alignment) or MVA as AOC calls theirs.

Those with an AMD GPU can use FreeSync with a range from 48Hz to 144Hz. NVIDIA based graphics cards can still use the 144Hz, but they won’t get adaptive sync.

Many gamers will question the 1080p resolution, but not consider that it might be an advantage depending on the exact GPU and CPU combination in use. With a middle-order GPU getting more than 100 fps consistently would be preferable to below that level at a higher resolution.

Also, our experience is that the fluidity of play (assuming a FreeSync compliant GPU), makes playing more immersive, and therefore the resolution becomes less critical.

Many of these next-generation VA screens have some impressive abilities, and the one in the AG272FCX is no exception. In testing with Datacolor’s Spyder5 calibrator, it managed a sterling 99% of the sRGB gamut and 91% of the AdobeRGB range.

While these numbers still aren’t likely to convince anyone who works with colour professionally to buy one, for gaming use those are number better values than any TN technology panel you can get with these refresh rates.

The quoted brightness levels at 250 cd/m2 are probably a slight undersell, as the screen can be even more luminous. The only caveat to that is that when you push the brightness setting above 75% tends to wash out the colours, somewhat negating its usefulness.

How this screen performs comes down to the rig that you match it with, although it works well enough with almost any PC.

A high specification system will probably be able to generate more than 144 fps at 1080p irrespective of details settings. And equally, a lower end solution wouldn’t be able to make the 144Hz capability or FreeSync mode of practical use.

It’s the middle band of performance that this monitor is best placed to work alongside.

One notable weakness is the power consumption. An average of 47 watts is on the high side for a 27in panel, as baselines go. But, decoding and displaying potentially up to 144 frames every second has a downside, and that’s it.