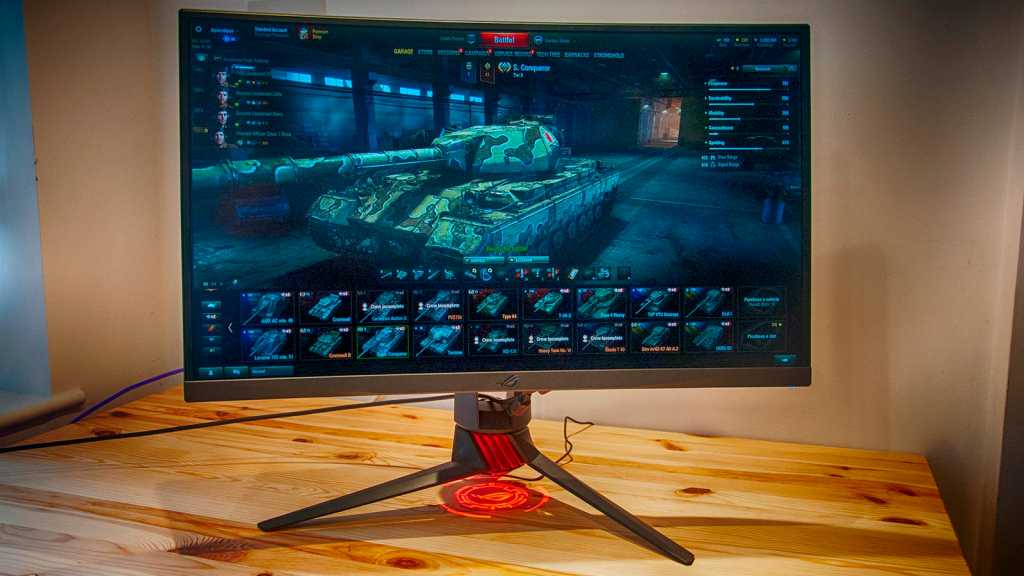 There are marginally cheaper 144Hz capable screens than this one, but they won’t have the same visual impact as this one will create on your desk. Admittedly some of the more glitzy features aren’t well considered, but you can deactivate them if they annoy. There’s a price implication to having such lovely looking hardware, but the Asus ROG STRIX XG27VQ does deliver on numerous other technical levels, somewhat cushioning that financial blow.

For the serious PC gamer, an ordinary monitor just won’t cut it. The high frame rates that modern GPUs can generate tend to cause screen tearing at standard refresh rates, impacting on the fluidity of fast-paced action.

The UK RRP price for the Asus ROG STRIX XG27VQ is £399 ($349). Unfortunately, finding it at that price can a challenge due to demand. Paying over £400 for one seems a high price, for a screen that only displays a maximum of 1080p resolution.

That cost reflects that this is a curved 27in FreeSync compatible screen, made to Asus’s Republic of Gamers legendary build quality. It’s about £50 more than the comparable Samsung LC27FG73FQUXEN and MSI Optix G27C.

At this time Asus hasn’t announced a NVIDIA G-Sync version, and it would cost plenty more if they did.

It’s easy to hose a product down with superlatives about the styling, even if the temptation with this design is almost overwhelming.

In another context, it would make a plausible prop for a science fiction movie. From the milled red aluminium details on the support foot to the subtly etched cosmetics on the rear plastic case, it’s spectacular.

As amazing as these surface details are, what’s inside is still important, and that doesn’t disappoint either.

The paper specs are that this is a 27 inch 1800R curved panel with a natural resolution of 1920×1080 and a refresh rate of 144Hz. It uses VA technology, the newest type that gives IPS colour quality and TN refresh speeds. And, Asus also made it an AMD FreeSync capable monitor, allowing a suitable AMD video card to define the synchronisation within the scope of 48-144Hz.

And, for when the action gets furious Asus also empowered this screen with an Extreme Low Motion Blur capability that is at this time is unique to this display in the Asus range. And, a signature feature of ROG parts, Asus also splashed some Aura RGB lighting around that’s curiously mostly out of view of the person who paid for it.

Weighing in at close to 7kg, the XG27VQ needed a substantial support, and the metal tripod that Asus built for it certainly stout enough for the job.

Our only reservations about it are the amount of desk space it occupies, being some 30cm deep and 46 cm wide. That contributes to good stability, but Asus didn’t exploit it to offer anything more than a vertical, pivot and tilting movement. Whatever the reason that they didn’t include twisting, on a curved screen portrait mode does look peculiar.

For those wishing to see just how odd, the support is detachable, and the panel can be VESA mounted to an arm or the wall.

Declining that option and keeping the stand, the reward is a short cable management path and, oddly, a downward projecting ‘bat-signal’ of sorts.

Included in the box are two pre-designed overlays that you can attach to the underside of the support, both being variations on the ROG logo. And, they also include a clear piece of acrylic for you to create a custom design, for those that are so inclined.

A disappointment to the bat-signal is that it only projects in red, where the other lighting on the rear of the screen has elegant RGB cycling colours. Given that the downward projection is viewable by those sat in front of it, using user-definable colours on that could have been a nice touch.

The RGB ones at the back are lovely, but unless the monitor is close to a wall, the user will be gloriously unaware of whatever shades these rear mounted LEDs produce.

More rational choices guided the available ports, with a single HDMI 1.4, DisplayPort 1.2 and DVI-D available. There is also a 3.5mm audio mini-jack, sourcing the audio through the HDMI lines. That’s the only means to get sound out of this screen, as there are no speakers.

A plastic cover is provided to hide the unsightly cable connections and make altering them more complicated than it rightfully should be.

The controls are on the right at the rear, where a small joystick and row of buttons enable quick changes to the colour modes and power management features through an onscreen menu.

Tested with a Spyder5 Datacolor Calibrator, our analysis returned numbers that are remarkably close to those Asus is quoting.

The sRGB gamut is an impressive 96 percent, even if Adobe RGB is only 75 percent represented. In short, you get lots of hues, just not exactly the ones that anyone working in colour design might enjoy.

The default Gamma tracks the 1.8 profile reasonably closely, although it is probably nearer to 1.7 if we’re splitting hairs.

At a 100 percent brightness setting the screen outputs 296cd/m², almost exactly the 300 cd/m² Asus put in the specifications. The static contrast ratio is 930:1, which is about a third of what Asus quotes, but still decent.

We’re rapidly coming to the view that the Spyder5 sensor can’t detect the darkest contrast settings offered by the newest VA panels, and therefore underscores the contrast. If true, Asus’s numbers, like their brightness values, may well be spot on.

In gaming use the performance is excellent. Asus included all manner of special modes that you can quickly access from the menu that enhance the experience, irrespective of how you are using the screen.

There are seven modes including; Scenery, Racing, Cinema, RTS/RPG, FPS, sRGB, MOBA and User Mode. These modes can tweak the screen settings in subtle ways. The FPS mode reveals more shadow detail, and MOBA mode makes any HUD elements brighter. Whatever types of games you like, one of them should be appropriate. And if none are, you can access User Mode to fashion a custom one.

The caveat with these features is that most people have a fire-and-forget mentality to display configuration, and Asus has considered that dilemma.

Their solution is the Asus DisplayWidget, a PC application that also works with this monitor and their MG24UQ, MG28UQ and MG248Q models.

It enables the user to define what mode you’d like to see with specific applications, and have the system automatically change when you fire up a game or Photoshop, for example.

This app is certainly worth downloading and installing from Asus if only to automatically reduce the blue light levels when you’re in desktop mode.

Curved displays are a personal preference. The 1800R curve on this one is rather severe, and for it to be perceived as being flat, the viewer needs to be at least 5ft away. Sitting that far back seems to undermine buying a 27in screen, logically. Sit closer though, and it’s a bit like having you’re a personal IMAX cinema.

For all the things that Asus put in this design, there is one glaring omission. Why didn’t they include a USB hub? Given how this one item helps gamers by allowing them to reduce cable clutter, it seems bizarre that didn’t include one.