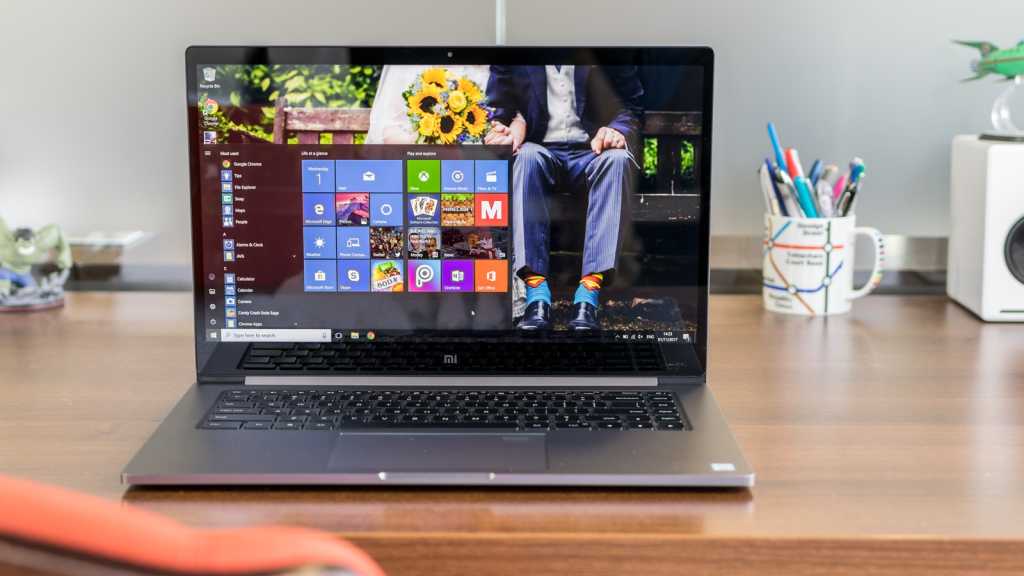 The Xiaomi Mi Notebook Pro is a gorgeous laptop with decent performance, a large screen and an attractive price tag. However, it is a real headache to set up out of the box, and something we would never recommend for novice users. We’d also prefer to use a higher-resolution screen on a laptop of this size, and the US keyboard is a drawback. Once set up you’ll quickly fall in love with the Xiaomi, but paying just a little bit more for a comparable UK model may well be an easier solution.

Xiaomi’s Mi Notebook Pro is a gorgeous laptop with a MacBook-inspired design, very good performance and an appealing sub-£1,000 price tag. It has one major drawback for UK users: it runs Chinese Windows 10.

If you want a laptop that you can take out the box and immediately begin using, stop reading now. This isn’t the laptop for you.

If you are prepared to put in some effort in configuration, the Mi Notebook Pro offers a very good return. Please continue reading.

Where to buy Mi Notebook Pro

Xiaomi’s high-end laptop is not available to buy in the UK, but you can get it via GearBest. This company is based in China and offers free delivery, though you may be asked to pay import duty upon arrival in the UK (20 percent of the value on the shipping paperwork; read more about buying from China).

Do bear in mind that installing an English version of Windows 10 will add to the price. We’ll consider this in more detail below.

How to get English Windows on Mi Notebook Pro

Setting up the Mi Notebook Pro to run Windows 10 is hasslesome, but we think worth it – provided you know what you’re doing.

It is possible to use Google Translate (or someone fluent in Chinese) to help get you through the Windows 10 setup process, then add an English keyboard and display language. But this is difficult, time-consuming and will not completely resolve your problem. A better solution is to install a fresh copy of Windows 10 that comes in the language you want to use.

First you’ll need to get an English Windows 10 Home licence, because the key is not transferrable from the Chinese version. You can pay up to £119.99 for a retail copy of Windows 10 from Microsoft, but a cheaper alternative is to pick up an OEM version. These start at less than a tenner.

That sounds crazy, right? But it’s true. We’ve summed up the key differences between the retail and OEM versions of Windows 10 in this separate article, but the main takeaways are that Windows 10 OEM comes without tech support, and that it is locked to the hardware on which it is activated. So you can’t install Windows 10 on another machine using the same key, and if anything goes wrong it’s your problem to fix it. We can live with those things.

Now it’s time to install a fresh copy of Windows 10, which you can do by following the steps in this article. It’s not an especially difficult process, although we wouldn’t recommend it for beginners.

The first issue you will find during the setup process is that the trackpad and buttons won’t work – this is because in clean-installing Windows 10 you’ve wiped the necessary drivers. For now, either plug in a wired mouse or use the Tab key to jump from field to field, and press Enter to select Next. We can worry about the drivers later.

During the installation process you will be asked which keyboard you want to use. The Mi Notebook Pro has a US keyboard layout, so we recommend installing this but also installing the UK English keyboard layout. This will enable you to access the £ key, but it will move around certain other button functions – the @ symbol will be available via the ” key, for example. You can switch between US and UK keyboards using the ENG icon in the taskbar.

Having installed and activated Windows 10 you’ll need to address the driver issue. At the time we tested we were unable to source these online, so instead used the free DriverBooster utility to find and install the necessary software. It found everything but the Mi Notebook Pro’s fingerprint scanner driver, but fortunately this is the same as that used by the  13in Mi Notebook Air, which was easier to source.

When we say the Mi Notebook Pro has MacBook looks we really mean it is right up there with Apple in terms of build quality and design. This Xiaomi laptop doesn’t have the tapered front end of Apple’s laptop, measuring in about 15mm in thickness right across the body. It’s also quite a bit larger thanks to a 15.6in screen (the MacBook is 12in), but there is something definitely Apple-esque about its body. This extends even to the USB-C port on the right edge – you get two of these, though one is reserved for charging.

A solid chunk of dark grey aluminium, with no manufacturer logos to spoil the finish, the Mi Notebook Pro looks like a pricey laptop. Jet black backlit keys contrast nicely against the chassis, and looming above is a large glossy display with super-slim bezels.

At 15.6in the display offers plenty of room for getting serious work done, but it does mean the laptop itself is rather large. Though it manages to maintain a sleek overall impression, the Mi Notebook weighs 2kg and has a 360x244mm footprint. You’re not going to want to cart it around more than you have to.

This is an IPS panel, which provides punchy yet realistic colours and decent viewing angles. It’s marketed at around 300 nits, though we measured 220cd/m2 in our lab. This is plenty bright for a laptop display, and contrast is also good.

However, the one oddity in this premium laptop’s spec is its screen resolution. This, in common with all Xiaomi’s phones, is a full-HD panel with 1920×1080 pixels. That’s fine for the smaller screen of a smartphone, and even on a budget- or portable laptop, but at 15.6in it’s pushing the boundaries. Text is largely sharp and fuzz-free, though for a premium laptop we would hope for more for images and video.

The other thing to point out is this is not a touchscreen. That’s not a dealbreaker for us: we’ve always found it strange interacting with Windows laptops using touch unless they’re 2-in-1s or much smaller models, but it is an increasingly common feature in premium laptops, and it may have been useful in a laptop screen that will lay back as far as this one. Even without a touchscreen, though, this does make it more comfortable when used on a lap.

The keyboard is expansive, given the large chassis, and having left out a separate numberpad Xiaomi has been able to include full-size keys that are adequately spaced. Typing is both comfortable and quiet, with good feedback from the 1.5mm travel buttons. Our only real complaint here is that it’s a US keyboard, but as we explained earlier in this review you can work around this to access UK-specific functions.

The trackpad sits below the keyboard, taking up a good third of the width of the laptop. It’s enormous. It’s also flawless, and though there are no separate left- and right-click buttons built-in which may frustrate some it’s incredibly easy to use.

At the top corner of the trackpad is a fingerprint scanner, which gives the Mi Notebook Pro that extra wow factor. The scanner works with Windows Hello, and in our tests was fast and responsive when logging into Windows.

Around the edges you’ll find the two aforementioned USB-C ports on the right, alongside an SD card slot, and on the left a full-size HDMI, two USB 3.0 and a 3.5mm headphone jack. Sound is a strong point for this laptop: turn it upside down and you’ll find a pair of speaker grilles that conceal two 2.5W Harman Kardon Infinity speakers. Dolby Atmos sound tech is also in use.

There’s no ethernet, as is becoming increasingly common, nor a DVD drive. However the Mi Notebook Pro supports Bluetooth 4.1 and 802.11ac Wi-Fi.

Xiaomi really pulls it out the bag when it comes to performance. Although we tested the lower Core i5 model, its eighth-generation Kaby Lake quad-core processor can Turbo Boost up to 3.4GHz and is capable of some impressive things – especially given the dedicated Nvidia GeForce MX150 GPU, based on the Pascal architecture. The Mi Notebook Pro is able to switch between this and the integrated Intel UHD Graphics 620 when required. You also get 8GB of DDR4 RAM and a 256GB SSD.

This is a similar hardware setup to the HP Envy 13, a laptop perhaps better known in the UK than the Xiaomi. It, too, has MX150 graphics, but with a dual-core Core i7 processor. With this configuration it costs £949 – more expensive than the Xiaomi, even when you factor in import duty and the cost of an OEM Windows 10 licence – and yet it’s slower and has a smaller 13.3in screen.

We also ran GFXBench and 3DMark, and recorded 58fps in Car Chase, 1077 points in Time Spy and 1453 points in Fire Strike Extreme.

We’d still consider the HP Envy 13 as a potential purchase over the Xiaomi, however, given its easier setup out of the box, its UK keyboard and the fact it’s going to be more comfortable to carry around. This exact configuration also has a more capacious 360GB SSD.

Battery life is important when it comes to laptops, even if you’re unlikely to be taking this one too far from mains power. You should get a full working day’s usage from the Mi Notebook Pro, but what you use it for will naturally affect its runtime.

To test battery life we set the screen brightness to 120cdm/2 and run a video on a loop. The Mi Notebook Pro managed 7 hours 59 minutes in this test, which is not outstanding but also a long way from the worst we’ve seen. The HP managed 12 hours 20 minutes by comparison.

When the battery is depleted you can recharge the laptop in less than two hours using the included 5V 3A USB-C charger. This has a two-pin plug, so you can either ask GearBest to supply you with an adaptor or purchase a UK USB-C laptop charger.