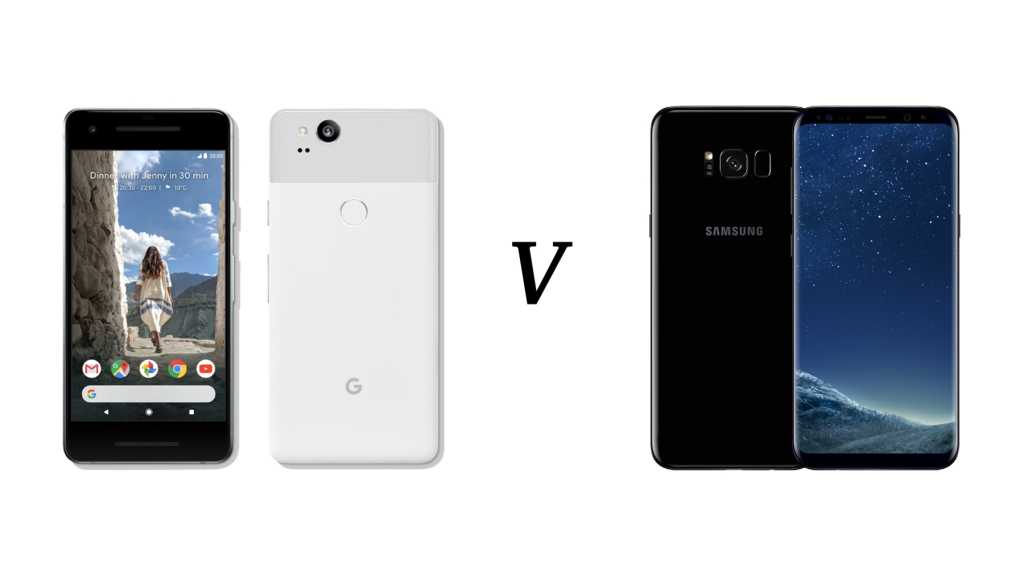 We said at the outset that these smartphones represent two camps of Android thought, and nothing much has changed. They are both excellent devices, and ones we can recommend easily to anyone that wants a quality handset that takes great photos, videos, and is generally fun to use. Google’s Pixel range continues to impress in the areas of software and cameras, although the rather basic aesthetics let the device down when compared to the S8. No wireless charging is a big miss, and a lesser waterproof rating than its rival is a disappointment. The Samsung S8 is just about the most beautiful smartphone you can buy right now. Slim, modern, and premium. The fingerprint sensor placement is an odd misstep, and while the software is the best Samsung has every produced, it can be overly busy at times. If you want the best hardware, buy the Samsung, if you want the best software experience then we’d choose the Pixel 2.

For many people, Samsung is Android. It’s the brand most associated with the platform, and certainly the most popular in terms of units sold. Purists will argue the Korean giant changes the software too much, and that the best way to experience Google’s operating system is to use one of its own devices.

So, which is the way to go for those who want the ultimate Android experience? We compare the Google Pixel 2 and the Samsung S8 to see how the different visions hold up.

With both of these devices being flagships you’re going to paying a fair amount whichever route you choose.

The Google Pixel 2 can be bought directly from the Google Store, with the 64GB version costing £629 and the 128GB model rising to £729.

Both are available in Just Black and Clearly White liveries, but Google has taken the unusual decision to offer the Kinda Blue variant only on the 64GB unit.

If you prefer a larger screen then there’s the Pixel 2 XL, which boasts a 6in display rather than the 5in found on its smaller sibling. This costs £799 (64GB) or £899 (128GB), both coming in either Just Black or the rather inverse Guinness-like Black & White.

Samsung offers the S8 in a single 64GB storage configuration which can be bought directly from the company for £689. This is expandable though, thanks to a microSD card slot. The S8 comes in four colour schemes: Midnight Black, Orchid Grey, Coral Blue, and Artic Silver.

Again, there is a bigger version available, the S8 Plus (£779), which offers the same configurations as its diminutive brethren.

As always, you can shop around for reductions on all of the models mentioned above, and there will be various offers available from your mobile service provider. We’d recommend checking out our buying guides below for the best current deals.

The Samsung S8 is regularly hailed as one of the best-looking smartphones currently available, and when you hold one for the first time it’s easy to see why.

A 5.8in Infinity display dominates the front of the device, curving around each side of the device, and going almost top to bottom. This is possible because the traditional Home button has been removed, with Samsung opting for software controls instead.

There is a fingerprint sensor, but it’s now on the back. This decision divides opinion, as although a rear sensor is fine (in fact the Pixel 2 has one also), its placement is up next to the camera lens. Having it here can lead to fingerprints on the lens rather than the sensor, but after a while muscle memory kicks in and you get used to it.

The dimensions of the S8 are very similar to that of its predecessor, except for being slightly taller. This allows the screen size to increase from 5.1in to 5.8in while keeping the device comfortable in the hand.

Gorilla Glass 5 adorns the back of the S8, meaning the device can be charged wirelessly, and the unit comes with an IP68 rating to certify that its fully waterproof.

Read our Samsung S8 review for a full breakdown of all the features of this truly impressive device.

Google has continued its unique design philosophy with the Pixel 2. This mainly boils down to the upper section on the rear of the device being glass, while the rest of the body is made from textured aluminium. A fingerprint sensor nestles just below the glass area, making it better placed than its Samsung rival.

A 5in display makes up the majority of the Pixel 2’s front, with large bezels housing stereo speakers. While undeniably useful, this does make it look a little dated when compared to the sleek, futuristic visage of the S8.

Sadly, Google has also decided to remove the 3.5mm headphone jack, a trend in smartphone design that still has yet to prove its worth to us in terms of how it benefits consumers.

Both devices have USB-C ports for fast-charging and connections, but the Pixel 2 doesn’t have wireless charging capabilities. Google’s device this year is waterproof with an IP67 rating too, which is just short of the more robust S8 with its IP68 rating (in the real world you won’t notice the difference though).

The Pixel 2 is a good, solid design, but it’s never going to win a hardware fight with the gorgeous and premium equipped S8.

A 5in full HD OLED display can be found on the Pixel 2, and its again a solid performer. The 1920 x 1080 resolution seems to be less demanding on the hardware than some of the higher resolution displays we’ve seen on other smartphones, resulting in the Pixel 2 being fast and smoothly response.

It’s a little unfair then that Samsung has placed such an impressive panel into the S8. At 5.8in, the SuperAMOLED display delivers a Quad HD 2960 x 1440 resolution, with vivid colours and crystal-clear definition.

The S8 is also one of a handful to support HDR playback for video. The pickings are slim at the moment, but Netflix, Amazon Prime Video, and YouTube all have content available that looks stunning on the Samsung display.

When compared to the Pixel 2, the Samsung offering is bigger, brighter and more colourful, plus the curved edges just feel exotic. Truly we think it’s the best you can get on an Android phone right now, with only the S8 Plus and Galaxy Note 8 giving any serious competition.

Picking up either of these phones will give you great photos and videos. Samsung sticks with the unit that found so much favour in the S7, giving the main camera a 12Mp sensor, f/1.7 aperture, and Optical Image Stabilisation (OIS).

The Pixel 2 has a fantastic 12Mp unit with an f/1.8 lens and OIS, plus plenty of Google trickery with the digital image stabilisation that does and incredible job of keeping video recordings rock-solid. Like the Samsung S8 is can capture 4K at 30fps, but the results from both stills and video are in our opinion are superior on the Pixel 2.

As we said, both are excellent, it’s just that the Pixel 2 is better.

Here’s the area where things get muddy. Yes, both run Android, but the experience is different on either handset. Samsung has worked hard in recent years to make its TouchWiz interface less busy and more refined.

This work has paid off. Gone are the cartoon colours that used to gouge the eyes, and instead there’s a classy looking, highly versatile control system in place. Menus are tasteful, pages look good, and there’s still a ton of features under the hood so you can customise the device to suit your tastes.

Google takes a more minimalist approach. Options are still plentiful, but not quite to the level offered by Samsung. This can be a positive thing though. The Pixel 2 is good to go, and as such there doesn’t seem much need to mess with additional tweaks or settings.

Both perform smoothly in operation, with the S8 not seeming to suffer from the classic Samsung lag that eventually appeared on previous models. This, of course, could change over time. The S8 comes with Android 7.0 on-board, but the Pixel 2 boasts Android 8.0, and we’d expect it to receive future updates to the OS faster than the S8.

Using the Pixel 2 is a rapid, unhesitating experience. Everything is immediate and flowing, with the OS just making sense. This is Android as Google always envisioned it would be, and we think it makes a compelling argument.

Here’s a comprehensive list of the technical features on both devices.