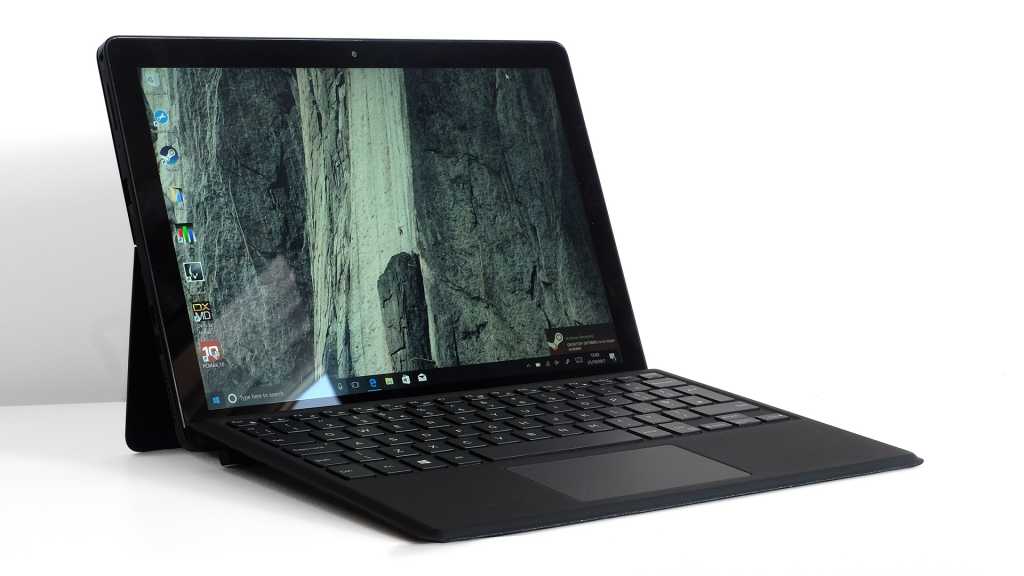 The Dell Latitude 5285 is a business laptop for workers who probably spend more time in face-to-face meetings than slogging away at a desk. Its removable keyboard design lets you setup the Latitude 5285 for demos and presentations using very little space. A vPro CPU and Smartcard reader will also let it slot into some IT systems more easily than a Surface Pro.  Solid battery life and good performance make this a hybrid with laptop-grade potential. However, it doesn’t eclipse the Surface Pro and for all-day working we’d still recommend a computer with a more conventional keyboard.

At first glance you probably wouldn’t think the Dell Latitude 5285 2-in-1 was a business laptop. It’s a lot like the Microsoft Surface, a hybrid with a magnetised keyboard add-on that may seem a bit flighty next to a classic ThinkPad laptop.

However, it adds real business-grade features, successfully merging the worlds of the boardroom and the average living room.

This entry-level laptop costs £1282 including keyboard, Active Pen, VAT and delivery. Our review model is a mid-ranger, with a Core i5 vPro CPU and 256GB SSD. It costs £1510 inc VAT and delivery.

You can get it for cheaper, but bear in mind these prices will be without the optional keyboard.

The Dell Latitude 5285 2-in-1 is a laptop to consider if the idea of a Microsoft Surface Pro appeals, but that model just doesn’t have the security features to slot into your IT infrastructure. It has perhaps the most consumer-flavoured take on the laptop-tablet hybrid.

Its screen is a slim tablet, the keyboard a very thin board that attaches to the display using magnets. The base doesn’t support the screen either, a metal kick-stand on the back taking on that important duty.

There’s very little in the Dell Latitude 5285 2-in-1’s look that screams “business” too. The stand has a brushed metal finish, the keyboard surround a faux leather look. This hybrid wouldn’t look out of place on the high street next to the latest crop of “Back to School” models.

With the keyboard attached the Dell Latitude 5285 2-in-1 is 14.9mm thick and weighs just 1.19kg. While the thin kickstand can make using the laptop on your knees feel a little awkward, this is certainly ultra-portable.

Other than the Windows 10 Pro OS and vPro CPU, you’ll find the Dell Latitude 5285 2-in-1’s most important enterprise features on its sides. There’s a Smartcard reader and a Noble security socket.

On the back there’s also a fingerprint scanner, an alternative to logging in with a PIN.

General connectivity is also fairly good for a modern tablet/hybrid this slim. There are two USB-C sockets with Display Port compliance and a full-size USB 3.0 port for easy connection of peripherals.

Behind the kickstand there’s also a microSD slot to add storage.

A keyboard that’s build upon a slim piece of plastic like the Dell Latitude 5285 2-in-1’s is always going to struggle to compete head-to-head with the best laptop keyboards. However, Dell has done its best here.

The keyboard compares well with that of the Microsoft Surface and other similar hybrids. There’s real motion to the keys, and standard chiclet spacing gives the typing experience a familiar feel.

The board is also commendably stiff given its limited thickness, and there’s a backlight for low-light typing. However, when the keyboard is in place, there’s a bit of “give” to its positioning. The board is stiff, but its magnetic anchoring isn’t entirely.

Its trackpad surface is perhaps the highlight, though, using an ultra-smooth plate of textured glass rather than a rectangle of plastic. It’s larger than that of some rivals too, although not huge.

It makes the screen appear taller, and leaves more room for the touchpad on the keyboard base.

Display quality is very good all-round, although this is not a true wide colour gamut panel. It covers a very respectable 87.5% of sRGB, making it appear well-saturated to the naked eye. The perceptual punch is further improved by very good contrast of 1095:1.

Coverage of the deeper DCI P3 and Adobe RGB standards are 63.6% and 61.3% respectively, but then this isn’t a laptop made for professional photographers and graphic artists.

It does have a few other design-friendly features, though. As a hybrid, the Latitude 5285 naturally has a touchscreen, and is usually sold with a Dell Active Pen. This is a digitiser stylus that uses Wacom technology.

It offers 2048 pressure sensitivity levels, the same as Wacom’s entry-level Intros Pro graphics tablets. Apple’s Pencil has a smoother glide to it, but the Active Pen does feel good.

Despite its lifestyle-leaning design, the Latitude 5285 has a full Intel Core processor. Our model uses the Intel Core i5-7300U, a dual-core CPU with enterprise-friendly vPro features.

This vPro chipset adds remote access capabilities, and has better general performance than the standard Core i5-7200U consumer version. It has a higher clock speed, with 2.6GHz base frequency and a 3.5GHz turbo.

In benchmarks, it scores just fractionally lower than the Latitude 5289. That’s a sibling of this laptop, using similar core hardware but with a 360-degree hinge rather than a removable base.

3051 points in PC Mark 10 and 8247 in Geekbench 4 indicate the Latitude 5285 has enough power to handle just about any day-to-day productivity tasks. Light video editing, Photoshop and, of course, any office suite will run just fine on this laptop.

Like almost every higher-end slim and light laptop or hybrid, the Latitude 5285 has 8GB RAM. There’s also a 256GB SSD. It’s not the ultra-high speed kind seen in MacBooks and some other top-end laptops, though, with read speeds of 551MB/s and writes of 508MB/s.

The Latitude 5285 uses the graphics processor built into the Intel Core i5, an Intel HD 620. It has no special gaming or graphics rendering skills, but is powerful enough to run some older games in your downtime.

Alien: Isolation by with a comfortably playable 31.9fps average at 720p, low settings. That drops to 12fps at 1080p with the graphical effects switched back on.

Deus Ex: Mankind Divided is, as with most other slim laptops, unplayable. It manages a 16fps average at 720p, low settings, and just 3.6fps at 1080p, Ultra.

The Latitude 5285 handles work and media playback well, but it’s not made for games. No surprise there.

It is very quiet no matter the exertion level, though. Unlike some slim hybrids, the Latitude 5285 has a fan rather than being passively cooled, but with any significant ambient noise you’ll have to put your ear up to the fan outlet to notice.

The top left of the rear of the tablet gets a little warm under strain, but none of this transfers to the keyboard. There’s also no annoying whines or clicks, which can sometimes still occur in laptops with pure solid state storage.

Using a very quiet fan system may explain why benchmark scores are very slightly lower than those of the Latitude 5289.

The Latitude 5285 has a 42Wh battery charged using the USB-C ports on the side of the tablet part.

Playing a movie on loop at 120cd/m brightness it lasts a very solid 10 hours 48 minutes. As long as duties are kept light, the Latitude 5285 will last through a full day’s work.

This is similar to (just slightly longer than) the result we saw from the 2017 Microsoft Surface Pro. Dell’s Inspiron 8285 beats it by three hours, though, thanks to its use of a bigger 60Wh unit.

Finally, let’s address the extras. The Latitude 5285 has stereo speakers that sit at the bottom of each side of the tablet. They’re quite loud and forthright, but don’t have any real bass, which you’ll hear in the best-sounding conventional slim laptops.

It also has two cameras, a 5.7MP one on the rear and a 3.7MP video chat sensor on the front. Both are respectable for a laptop, and the rear camera has autofocus.