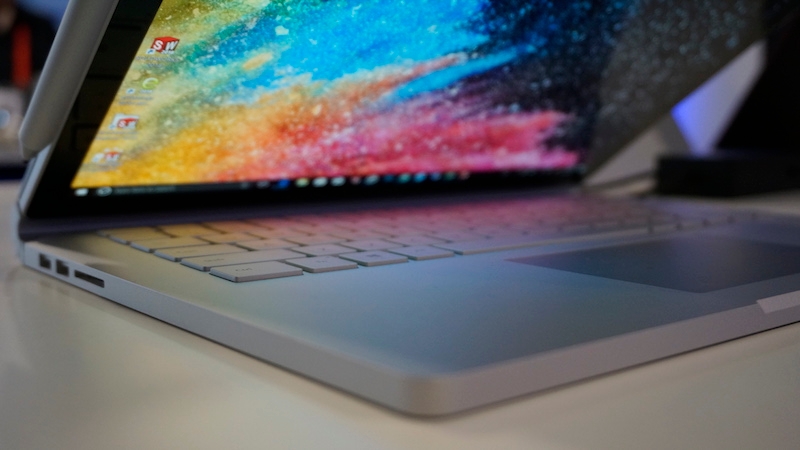 The Surface Book 2 is a stunning piece of work from Microsoft once again. It’s a great example of a premium laptop with top-level design, performance and features. We only have a few minor quibbles such as the lack of Thunderbolt. It might be one of the best laptops you can buy but not everyone should rush out and get one. The price means that it’s only justifiable for those who will really make use of its modes, features and performance. For the average Joe, a cheaper rival will suffice such as the Surface Laptop.

Despite being threatened by tablets for a while, laptops aren’t going away any time soon and Microsoft is back with a new version of the impressive Surface Book. Here’s our in-depth Surface Book 2 review.

The Surface Book 2 is undoubtedly an attractive laptop, but the big question here is whether you can afford it.

Even at the cheaper price, the Surface Book 2 is competing with some serious rivals including the MacBook Pro and Dell XPS 13.

There is also a 15in Surface Book 2 which starts at £2,349/$2,499. You can order the Surface Book 2 from Microsoft, and it’s also available from Currys PCWorld.

There’s little about the design of the Surface Book 2 that’s different compared to the original and we can hardly blame Microsoft for this.

Microsoft has once again opted for a silver casing made from magnesium and overall the device once again looks and feels very luxurious. Build quality is up there with the best laptops around and you’d hope so at these prices.

Clean lines and symmetry are on show here as is Microsoft’s clever Dynamic Fulcrum Hinge. Once again the Surface Book 2 is a 2-in-1 device so it’s a laptop and a tablet that can be used in various different modes.

A clever electronic ‘muscle wire lock’ system is still in use to connect the two sections together rather than magnets. It’s solid and there are improvements like fewer parts to make it lighter and a more seamless disconnect. The release button must be held down so don’t do it accidentally.

You’ll need to release the tablet section if you want to use it without the keyboard or two spin it 180 degrees for other usage modes. The hinge doesn’t fold the screen all the way over like some 2-in-1 devices.

As with the original, the keyboard and trackpad feel great, offering a smooth experience. We found typing fast and responsive – apart from the half sized up and down arrow keys – and the trackpad works very well, but the the push click is quite loud.

The laptop is marginally lighter than its predecessor at 1.53kg but that’s still quite heavy if you’re looking for a laptop to take around with you everywhere. Part of the reason is the inclusion of two batteries so this might be a worthwhile sacrifice if you need a laptop that lasts a long time.

Design qualms are all pretty minor. For example, the screen is still quite wobbly when you move the laptop or use the touchscreen and the two full-size USB ports are a little close to each other so you might not get two chunky flash drives in at the same time.

The second-generation Surface Book might look pretty similar on the outside but there are a number of different upgrades on the inside. Let’s take a look at what’s on offer this time around.

Microsoft has stuck with essentially the same display as the original Surface Book. It’s still 13.5in with a 3:2 aspect ratio and as mentioned earlier, the 15in model won’t arrive in the UK until early next year so for now it’s this or nothing.

The PixelSense display still uses a 3000×2000 resolution for a 271ppi pixel density. As with its predecessor, the screen on the Surface Book 2 is stunning and everything looks nice and crisp. At full, the screen outputs a very healthy 420cd/m2.

Colours reproduction looks to be top-notch again, too, so it’s a great choice for those doing tasks such as photo editing. Arguably, the price means you really need to need the specs and features on offer here to justify getting it over rivals.

You can use up to 10-point touch at the same time and as you’d expect, the Surface Book 2 is compatible with the Surface Pen and Surface Dial – both are sold separately this time around. Microsoft told us that not enough customers used it with the first generation so decided to make it an optional extra this time.

With the Surface Book 2, the Dial accessory can now be used on-screen.

It’s no surprise that the Surface Book 2 gets some internal upgrades starting with the processor. It’s jumped from a 6th-gen Intel chip to at least a 7th-gen Core i5-7300U.

So at the cheapest price you’ll get the above chip, but all of the higher spec configurations have Intel’s newer 8th-gen chips, also based on Kaby Lake. It’s a Core i7-8650U so you jump from dual- to quad-core and 3.5GHz Max Turbo clock speed to 4.2Hz.

There’s another key difference if you get a Core i7 model because while the Core i5 relies on integrated Intel HD Graphics 620, the Core i7 means you get discrete Nvidia GeForce GTX 1050 with 2GB of GDDR5 memory. That’s potentially a big difference depending on what you want to do on the Surface Book 2.

It’s worth pointing out that the discrete GPU is housed in the keyboard section so you don’t get access to that power with the display detached. For those wanting as much graphical power as possible, it’s going to be worth waiting for the 15in model which will come with an Nvidia GTX 1060 with 6GB of memory.

Like the original Surface Book, there’s a choice of 8- or 16GB of RAM (1866MHz LPDDR3) and you get a choice of 256-, 512- and 1TB storage capacities for the SSD from the off. Microsoft held back the 1TB model of the original in the UK for a number of months.

Performance is exceptional so the Surface Book 2 will satisfy power users as advertised and that’s just the 13in model. As you can see by the benchmark results below, the new model offers significant gains compared to the original – all while being incredibly quiet.

Again, you’ve really got to need this power to warrant splashing out on the Surface Book 2. It’s a device fit for professionals like graphic designers, architects and the like. Using anything above the Core i5 model for word processing and web browsing is overkill.

If you want performance, the Surface Book 2 is where to get it but you’ll need to get one of the more expensive models with the Nvidia GPU. We tested the top-spec model with a Core i7 and 16GB of RAM for both generations.

Ports and other specs

Once again the Surface Book 2 has two full-size USB ports (3.1), a full-size SD card reader and a headphone port. There are some changes though, as the laptop no longer has Mini-DisplayPort but USB-C instead along with two Surface Connect ports – one on each section of the device.

While USB-C is a nice addition, despite losing DisplayPort, it’s all plain sailing. The port doesn’t support Thunderbolt and therefore can’t run multiple displays. The Surface Book 2 can only manage one unless you use the Surface Dock.

There’s 11ac Wi-Fi, Bluetooth 4.1, stereo speakers, dual microphones and the same 5- and 8Mp front and rear cameras. The front one can be used for Window Hello facial authentication. It’s perhaps a shame not to see a fingerprint scanner as well at these prices.

We were a little bit blown away by the original Surface Book’s battery life, lasting a whopping 16 hours and 25 minutes in our usual video loop test. Microsoft claims 17 hours of video playback on the Surface Book 2 so we’re expecting a similar result.

As before, there’s a battery in both sections of the device so you’ll get five hours when using just the tablet and a further 12 from the larger one in the keyboard.

In our usual video loop test at 120cm/m2 (55 percent in this case) the Surface Book managed a respectable four hours and 51 minutes on just the tablet. When plugged into the keyboard and utilising that second battery, it lasted for 13 hours and 43 minutes.

So that’s just over a couple of hours short of the original which is a shame, but that’s still a figure that trumps rival laptops.

What you need to be aware of is a power problem with the Surface Book 2. As our colleagues on PC World have detailed regarding the 15in model, when at peak performance, it can draw more power than the charger is supplying.

This means that the battery will drain every with the power supply connected while playing certain games on the ‘Best Performance’ setting on the power slider.

Here’s what Microsoft said on the matter speaking to The Verge: “In some intense, prolonged gaming scenarios with Power Mode Slider set to ‘best performance’ the battery may discharge while connected to the power supply provided in-box with Surface Book 2. However, through power management design, the battery will never drain entirely, ensuring that users are able to keep working, creating or gaming.”

So it’s quite a specific problem, but certainly one to be aware of if you’re wanting to use the Surface Book 2 for gaming.