South Park: The Fractured But Whole provides a thoroughly enjoyable experience for fans of the TV series, allowing you to go head-to-head with characters you’ve watched for 20 years. The improved turn-by-turn combat system is in-depth and satisfying but rarely requires you to be strategic, which is a shame. It’s also a fun experience creating and tweaking your own superhero throughout the course of the game, changing everything from the costume to combat style and more. And of course, it’s packed full of offensive, ridiculous comedy that South Park is famed with. What’s not to like?

Following 2014’s South Park: The Stick of Truth comes The Fractured But Whole, the latest in the 2.5D RPG series that has the kids playing superheroes. It promises improvements from the first game, and a whole host of offensive jokes – but is it enough to satisfy a South Park fan and become one of the best games of 2017?

We’ve spent some time fighting and cursing on the streets of South Park, and here’s what we think.

Warning! The content of South Park: The Fractured But Whole is rated 18. It contains humour and language some may find offensive.

South Park: The Fractured But Whole UK pricing and availability

South Park: The Fractured But Whole is now available to buy in the UK on PS4, Xbox One and PC, and it’s available in a handful of editions.

You’ve got the regular edition available from the likes of Amazon and Game for £44.99, or you can splash out a little extra and get the Deluxe edition. The Deluxe edition offers additional content including the full Stick of Truth game and a costume & perk pack, and costs £54.99 exclusively at Game.

Amazon also offers an exclusive, though it stocks the Gold edition of the game. It’s pricey at £69.99, but it offers a season pass alongside everything included in the Deluxe edition above.

It’s slightly more expensive for those wanting to buy the game via Steam: it costs £49.99 for the standard edition and £74.99 for the Gold edition.

Finally, for the most diehard South Park fans, Ubisoft is offering a £79.99 Collector’s edition including everything from the Gold edition and some physical goodies like a 6in Coon figurine. 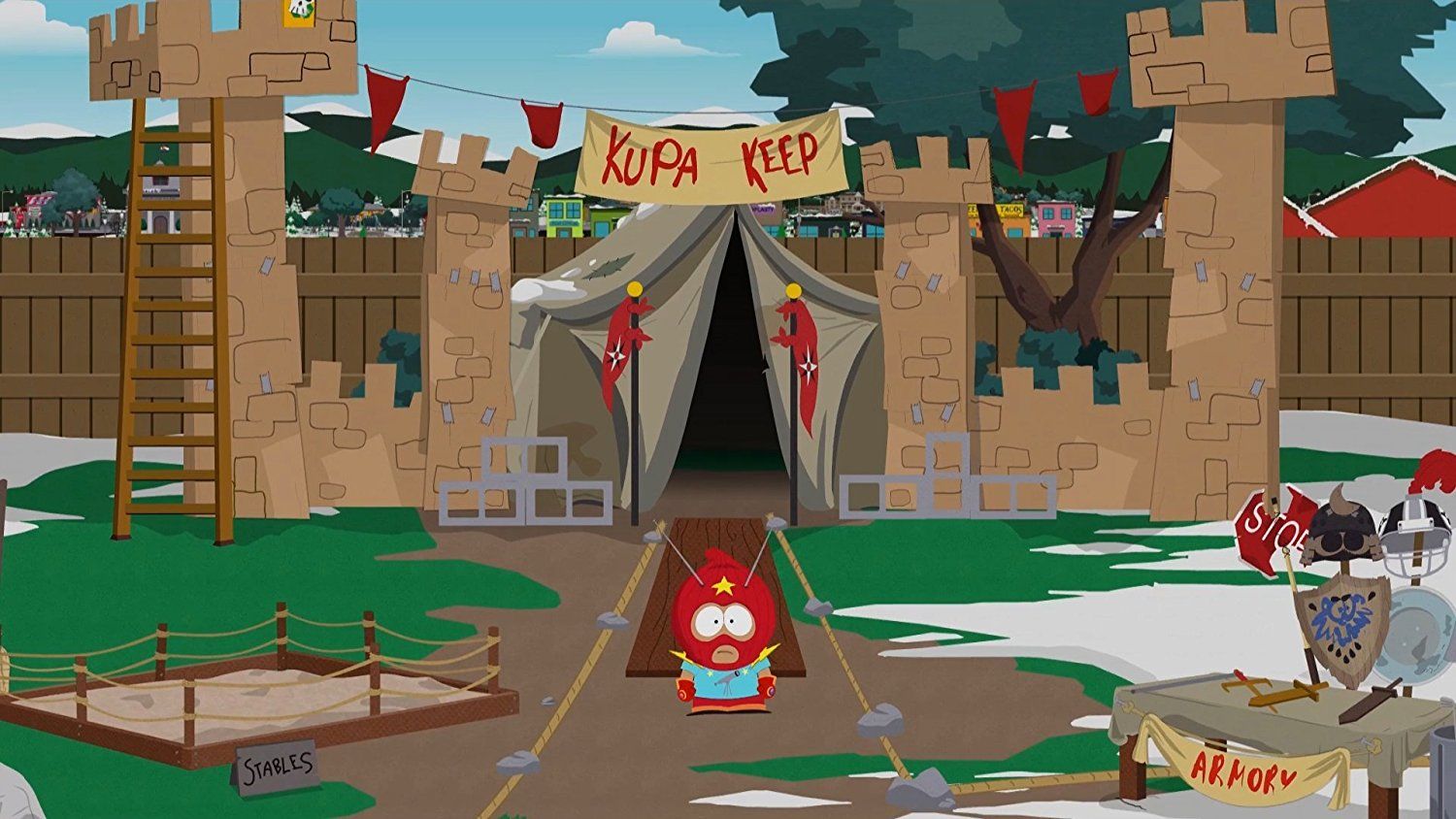 South Park: The Fractured But Whole once again puts you in the shoes of the New Kid, the newest resident in the 2.5D world of South Park. Like 2014’s The Stick of Truth, The Fractured But Whole is an RPG game, but this time Cartman and his friends have traded in their wooden swords of the Dungeons and Dragons-themed game for super powers in this superhero-themed title.

To help set the scene, a prequel episode aired the week before the game was released. For those that missed it, the storyline involves Coon and Friends, aka the South Park gang. Due to disagreements over where their superhero franchise was going, Mysterion and others left the group and formed Freedom Pals, thus starting a civil war between the two factions.

Up to date? Okay, good. Now let’s get into the thick of this offensive farting marvel.

Let’s start by saying that if you like South Park, you’re going to love The Fractured But Whole. Besides exploring the 2D world we’ve watched on TV for 20 years, the game features endless hat-tilts to characters and plots in previous episodes of South Park. You’ll come across memberberries (remember those?) and classic characters like Towelie and Mr Hanky, and will get to fight everyone from the Raisins girls to Kyle’s mum, Sheila Broflovski.

It allows you to fight alongside Cartman, Stan and others from the TV show, and comes with all the offensive stereotypical humour synonymous with the South Park series. If you love the show, chances are you’ll love the game.

Like in The Stick of Truth, your character is customisable not only in terms of looks and ethnicity, but your costume, combat style and even elements like your sexuality. You’ll find new costumes littered throughout South Park, allowing you to constantly change the look of the New Kid to suit your tastes.

You’ll also gain access to 12 allies throughout the game, three of which can back you up in battles. The variety of allies mean you’re not forced to stick with the likes of The Coon, and can provide different tactical advantages in battles.

The battle system is similar to the first game, but now works on a grid. The introduction of a grid makes things a bit easier to visualise and introduces new tactics to the game. 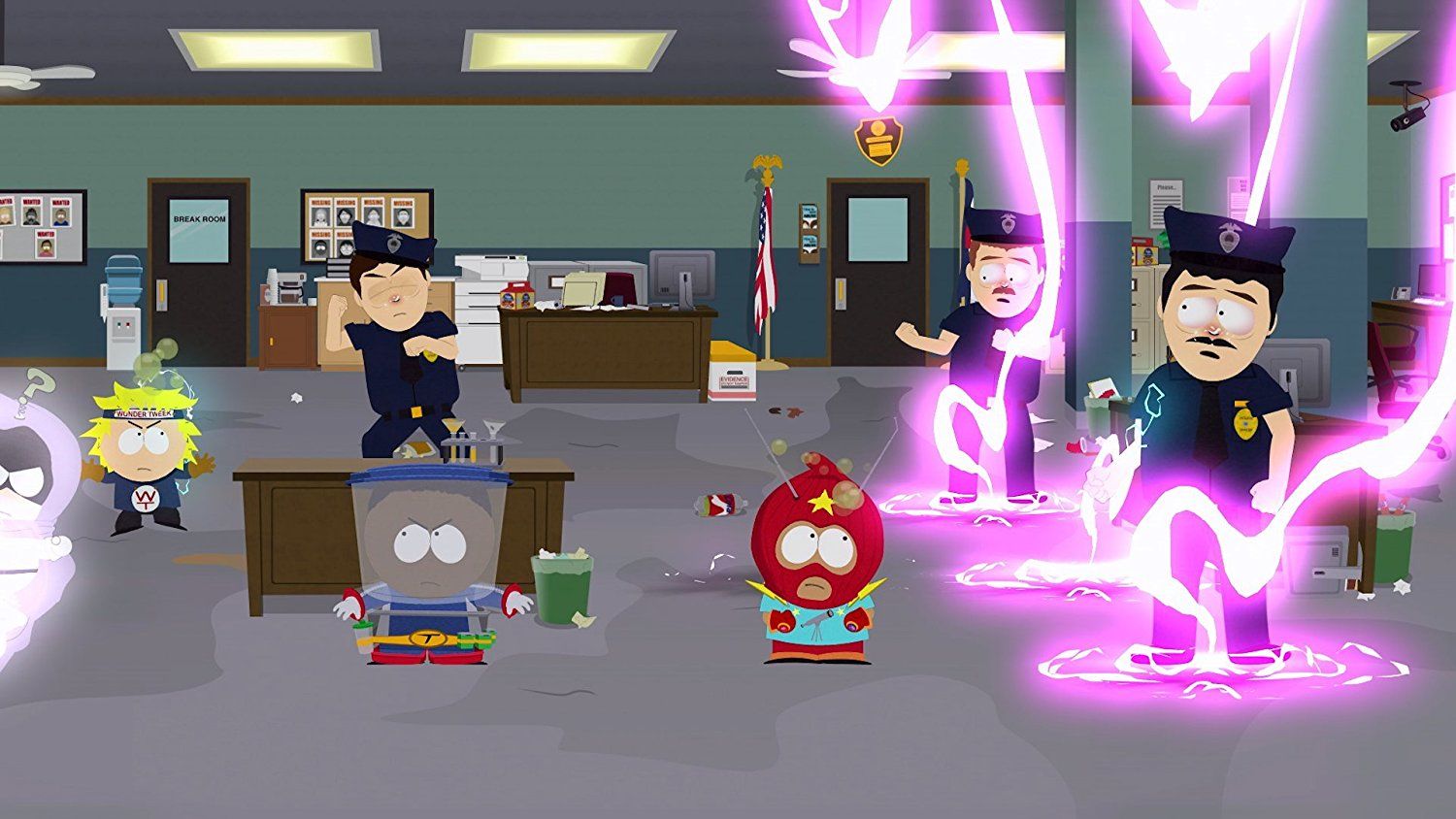 When it’s your turn, you’ll be presented with a blue area – you can move anywhere in this area, but you can only attack to the left or right, not above or below. Upon selecting a move, the damage area will be highlighted in red, and the damage and other debuffs (bleeding, burning, etc) applied to enemies will also be detailed, allowing you to find the perfect move for the situation you’re in.

Ideally, you need to be thinking a few moves ahead, planning out how to get enemies lined up for the best strikes possible.

The best ability is your ultimate power. As the fight progresses, a bar at the top of the screen will slowly fill up. Once it’s full, you’re free to activate the special power of any character on your team. These attacks vary in severity and radius, but each comes with an epic cutaway full of South Park charm.

Take The Coon for example: his cutscene shows him on the front page of various magazines and being interviewed on an episode of Inside The Actors Studio slashing every enemy on the board in dramatic fashion.

The cutscenes only last a few seconds and don’t happen in every battle, so it’s not something we minded re-watching on several occasions. If anything, it made us want to use each character’s ultimate so we could see all the hilarious cutscenes!

But while it’s fun to fart at someone or burn them with your laser eyes, battles (with the exception of a handful of boss fights) are just a little too easy. The mechanics are there to provide strategic thinking, but the battles rarely call for any level of strategy. With so many styles of attack and varying effects, you’ll find yourself wanting to plan multi-step attacks that devastate your opponent, but in reality, you’ll just be slapping down a bunch of sixth-graders without breaking a sweat.

You can also use your powers outside of battles to gain access to hidden areas throughout South Park, providing access to cosmetic upgrades as well as consumables and collectables (because let’s be honest, Ubisoft is famed for its love of collectables). 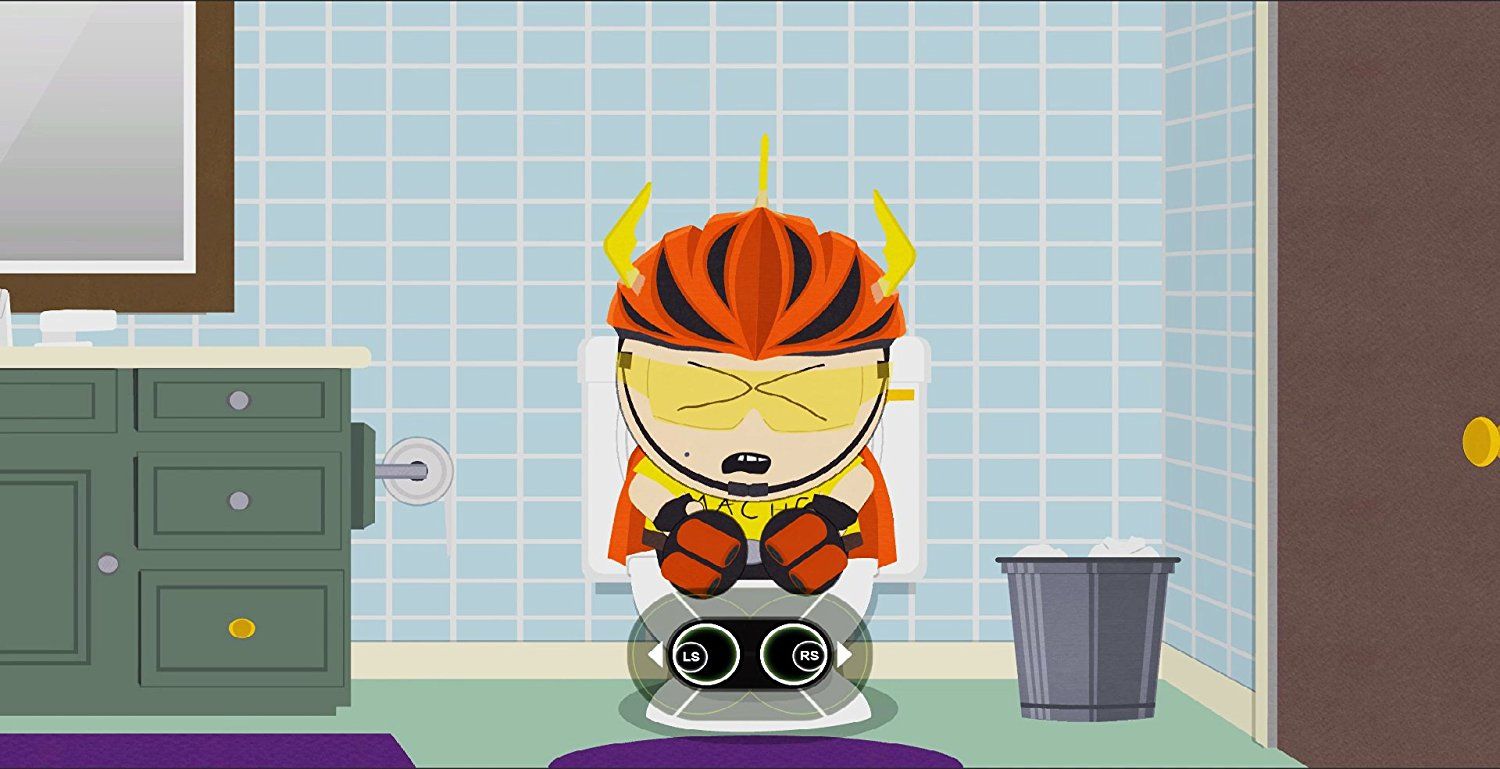 The powers are given to you over time by a typically poorly voiced Morgan Freeman and enables you to do things like pause time to get by automated guns or reach high ledges to find treasure, all thanks to the power of your farts. Because of course, farting is the New Kid’s main superpower.

There are a variety of side quests and collectables to find in The Fractured But Whole, which means you’ll be doing a lot of walking. There are fast travel points courtesy of Fastpass, aka Jimmy, but we feel that these aren’t in the most convenient places for travelling across the map. It only takes a few minutes to walk around, but upon your fourth or fifth time of walking by and triggering the same NPC saying the same thing, it starts to get a bit irritating.

We’ve also walked past the objective on multiple occasions because unless the New Kid stands still and enters Inspection Mode, no objective indicators are displayed on-screen. It’s one thing we’d love to see changed in a future patch, as it’s not very intuitive and let’s be honest, many of the houses in South Park look similar so it’s easy to lose track and walk by.

Walking sim-esque features aside, South Park: The Fractured But Whole is whimsical, from your farting superpowers that can manipulate time, to moments where you have to stop mid-battle to move give way to a passing car. But beyond its backbone of whimsical slapstick comedy, it’s a game about kids being kids and using their imaginations to create a better environment than the one they’re currently in.

This is particularly evident in side-quests where you find out more about each character and their issues, like Stan worrying about his dad’s alcoholism or Craig’s issues with his ex-boyfriend, Tweek. The superhero antics provide an escape for the kids of South Park, as well as a way to work through their issues. It’s pretty deep for a game that you thought was about fart jokes and racist humour, right?