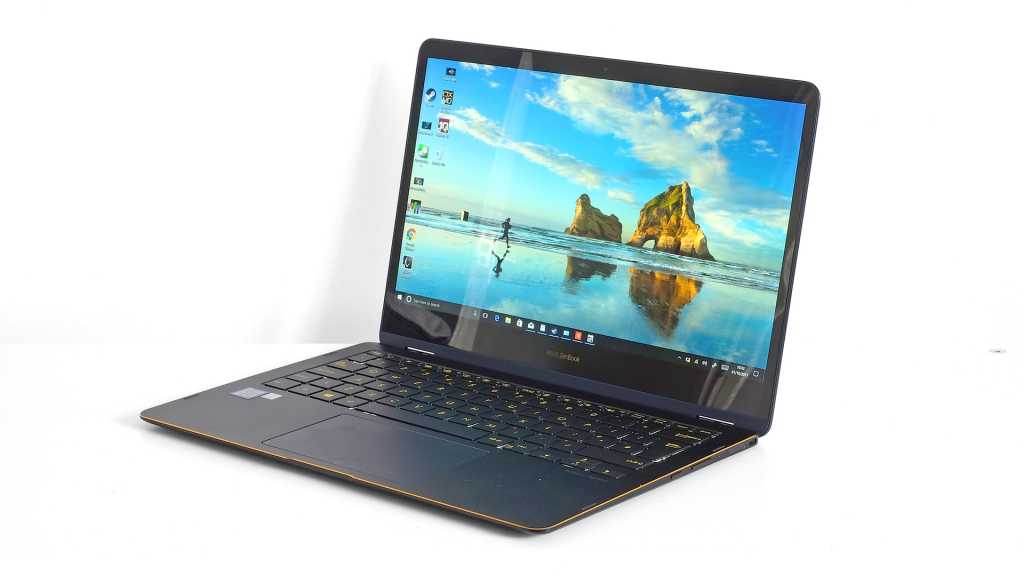 The Asus ZenBook Flip S is a near-perfect laptop for someone who wants a hybrid that is very thin and very light, without sacrificing productivity power. A year or so ago a laptop like this would probably have used a Core Y/M-series processor, which just isn’t as powerful. It won’t please those who hate shallow keyboards, or need a laptop that will definitely last through a full day’s grind, though. If that’s what you’re after, consider the HP Spectre x360 or a non-hybrid touchscreen model.

The Asus ZenBook Flip S UX370UA is a premium 2-in- 1 laptop. It follows the Flip UX360, which suffered from a highly reflective screen and too much keyboard flex.

Asus has solved these issues entirely in this new model, resulting in a laptop that feels much
better-made. While many of you will be better off buying a non-hybrid laptop with a longer-lasting battery, the Asus ZenBook Flip S is one of the best 2-in-1 models around.

The version of Asus ZenBook Flip S we’re reviewing has a Core i7 CPU, but otherwise the same specs. Unusually, at the time of writing this can actually be found for less than the i5 model, £1259.

It’s a reminder you can often find a better deal than the RRP when buying a laptop.
The Asus ZenBook Flip S comes with a 1-year collect and return warranty.

Asus has messed-up a few times recently with some of its more dynamic laptop designs. The
ZenBook 3 casing flexed too much, causing the trackpad button to stop working if you held the
laptop in the wrong place.

The direct predecessor to the Asus ZenBook Flip S, the UX360, had a keyboard that moved a bit under pressure. After years of solid build, we were starting to worry about Asus.

Its Asus ZenBook Flip S redresses the balance, though. This is a very well-made laptop, with a
keyboard surround and screen about as stiff as they come.

It’s all the more impressive when you consider the Asus ZenBook Flip S is one of the slimmest 2-in-1 laptops in the world. Just 10.9mm thick, it’s thinner than some tablets. 1.1kg weight is also exceptional for a 13.3-inch model. Carrying this laptop around is a dream.

The look is, for the most part, typical of the ZenBook series. There’s a spun circular texture on the aircraft-grade aluminium of the lid, but untextured aluminium on the inside and underside.
It comes in a very dark blue colour, peppered with some gold highlights. The very edge of the aluminium of the keyboard’s edge is shiny gold, and the keyboard keys use yellowy-gold lettering.

Asus’s logo on the lid is, of course, bright gold too. Unless you like your laptops plain as they come, don’t worry about the design as it’s really not as brash as it may sound.

The Asus ZenBook Flip S is one of the few laptops slim enough to make its design a credible
excuse for a lack of ports. There are just two USB-Cs on the laptop, and the power adapter uses one while charging.

This laptop actually prepares you for the leap to an all-USB-C future, though. An included mini
breakout box adds HDMI and traditional USB connectors, plus a USB-C to replace the one it takes up.

Asus’s own website details a larger dock connector that also adds an SD slot, VGA and RJ45
Ethernet ports. However, we rather like the dinky one we get in the UK as it’s small enough to just bung in a pocket.

The other victim of trendy, slim design is key travel. These keys only depress 1mm. That’s more than the MacBook Pro’s ~0.7mm, but still less than, for example, the 1.6mm of the ZenBook UX310UA.

Some of you will not like the Asus ZenBook Flip S keyboard. And, sure enough, we prefer greater travel too. However, other elements of the hardware are sound.

They are less high-pitch than the ultra-shallow Apple MacBook keyboard, and have enough
definition to avoid typing seeming vague. If you don’t think you can get on with a shallow keyboard, just don’t buy the Asus ZenBook Flip S. You have other options.

The keyboard has a 3-level backlight, which shines yellow through the coloured lettering of the
keys.

Below sits a textured glass trackpad, with a surface that is both very large and very smooth. As
usual for a slim Windows laptop, the buttons are built into the pad, and bisect its width.
We’ve not encountered any driver-related annoyances. It’s mostly a joy to use, although the button action does have quite a high-pitch feedback. Quieter, lower-toned clicks are less distracting if you work in a quiet space.

You might expect a spec-packed screen given the Asus ZenBook Flip S’s price. However, it’s
actually a little conservative, with fewer pixels than the cheaper UX360 reviewed previously.
It has a 13.3-inch 1080p IPS LCD panel, where the old Flip had a 3200 x 1800 pixel screen. As
such it’s not quite as sharp as a MacBook or Microsoft Surface Laptop.

Asus does offer the ZenBook Flip S with a 4K screen from certain retailers. But from our research, it seems there aren’t any of these in the UK.

Colour and contrast performance are very good, if no less than we expect in a laptop costing
significantly more than £1000. It covers 83.9% of sRGB, which to our eyes appears very well-
saturated.

The Dell XPS 13 beats it by over 10% coverage, although we reviewed the version with a screen upgrade so it’s not an entirely fair comparison. And, purely anecdotally, we think films look very good on the Asus ZenBook Flip S’s display. Contrast is just as important as colour here, and the Asus’s result of 996:1 is very solid. Blacks look deep. Top brightness is good rather than great at 303cd/m.

However, we took it outside on a sunny day to see how it would fare and, despite the reflective Gorilla Glass glass top layer, the display was actually quite clear at max brightness.

Like any hybrid laptop, the Asus ZenBook Flip S has a touchscreen. And, like any good hybrid
laptop, the screen will sit fairly happily at any angle.

The stylus is the most interesting extra, though. You get a battery-powered 1,024 pressure level stylus as standard. It has two buttons. They are used, for example, to erase your scrawls in an art app like Autodesk Sketchbook. A demo version is pre-installed.

This stylus isn’t quite a pro-grade tool. It has a hard plastic nib that doesn’t feel as smooth as the best. However, that doesn’t mean you can’t create pro-grade work with it if you’re a designer who wants a light laptop they can sketch with quickly in meetings.

This sort of power is enough for most of the tasks we perform for work. Windows 10 feels great,
8GB RAM gives you enough scope to be lazy about cutting down the number of apps and tabs you have open, and the very fast SSD keep Windows 10 feeling very slick.

There are just two things to consider: do you need quad-core power, and do you want to play
games?

We’d like to think most people who definitely need a quad-core CPU will know so already, and
have squared with themselves that they can’t have a laptop as slim and light as this. Sorry, folks.

Gaming is another slight weakness of the Asus ZenBook Flip S. It uses integrated Intel HD 620
graphics, which is a part of the Intel Core platform.

This chipset can handle older games. Titles like Dragon Age, Skyrim and Dead Space will run
surprisingly well if you fiddle with the graphics settings. However, results in our benchmark tests are predictably uninspiring.

In Alien Isolation the Asus ZenBook Flip S manages an average 30fps at 720p, low graphics. It’s playable, but doesn’t make best use of the screen resolution or the game’s artwork. At 1080p with the visuals turned back up, a 13.5fps average is a bit too stuttery for comfort.
Deus Ex: Mankind Divided is really too slow even at 720p, low settings. It averages 14.3fps like
this, dropping to 3.3fps at 1080p, Ultra graphics.

None of this is remotely surprising, but is worth thinking carefully about when several slim ‘normal’ laptops now offer dedicated graphics. Just recently we reviewed the HP Envy 13, with GeForce MX 150 graphics, which more than doubles the frame rate results in our gaming benchmarks. Deus Ex runs at 36.8fps instead of 14.3fps, for example.

Even Asus wouldn’t claim this is a gaming machine. Just make sure you’re happy to prioritise a
slim and light hybrid build over games performance before buying.

Battery stamina also takes a hit because of the design, the Asus ZenBook Flip S using a 39Wh
battery where the rival HP Spectre x360 has a 57.8Wh cell. This is where you really pay for that
ultra-slim frame. The HP is around 3mm thicker.

The result far from a disaster, but does mean you miss out on the great battery life of some other standard slim laptops and less aggressively thin hybrids. Playing a 720p video on loop, the Asus ZenBook Flip S lasts 8 hours 40 minutes. For more mixed use, expect between 7-8 hours.

While this would actually suit us just fine for about 90% of the year, we’d be tempted to give up
some of the thin factor for a couple of hours extra battery. Work trips abroad and very long flights will test this stamina, as well as simply days full of back-to- back meetings where you can’t get to a power plug easily.

Asus has done its best to make the adapter super-portable, though. The power brick is a little
palm-size thing you could fit in a coat pocket. Good luck stashing the 3-prong cable in there too: better put that in your rucksack.

Battery life aside, the Asus ZenBook Flip S is still a great laptop for holidays. The speakers earn it extra cred on this front. While not quite as loud as some, they have better bass than some laptops weighing three times the amount. Unusually full low-mid and bass frequencies add real weight to voices and bass instruments.

The speakers are Harman Kardon branded, but as we’ve seen good, bad and indifferent speakers with that name attached, we’re inclined to give Asus the credit for this one.