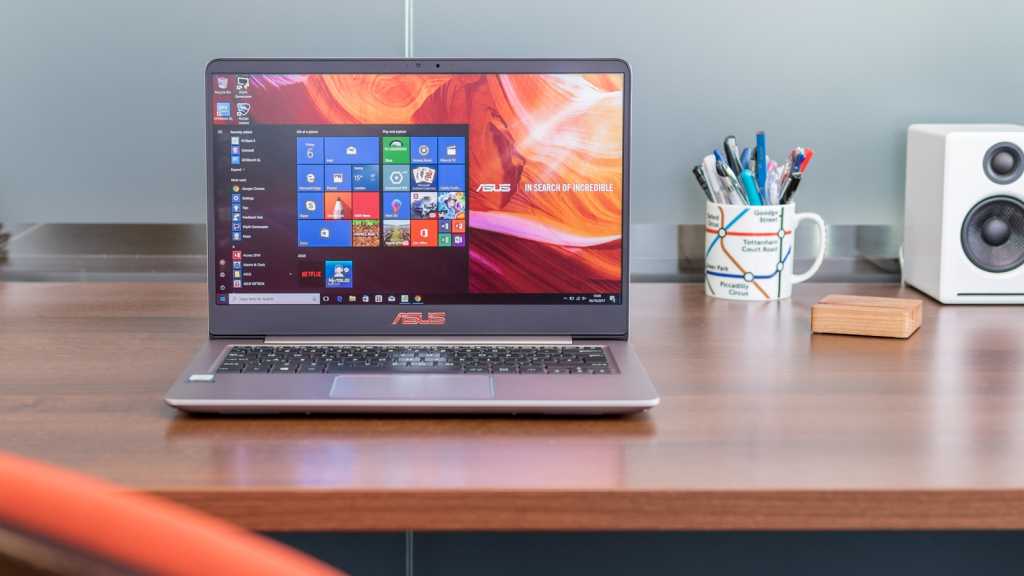 The Asus ZenBook UX410 is a stunning laptop in terms of design, there’s no doubt about that. The small details, like the spun metal finish on the lid or the chamfered edges of the trackpad, help the ZenBook look like a high-end laptop without the pricetag. Of course, it’s when it comes to the actual performance of the laptop that the price becomes more apparent – the benchmark scores were fairly low across the board when compared to the competition. If you’re looking for a stylish, lightweight laptop for the likes of Facebook browsing and Netflix binging, the H&K speaker-enabled ZenBook UX410 is for you. If you would like to edit photos, play games or do anything that’s more power hungry, we’d opt for something a little more powerful.

The Asus ZenBook UX410 is what you get when you cross a practical laptop with a super-sleek Ultrabook. You get the gorgeous thin and portable design of an aluminium Ultrabook combined with the practicality and performance of a standard (chunky) laptop.

But does the mid-range price-tag reflect the quality and performance of the Asus ZenBook UX410? We’ve spent some time with the laptop, and here’s what we think.

The Asus ZenBook UX410 is readily available to buy in the UK through the likes of Asus, Tesco and John Lewis with two variants for customers to choose from.

This puts the ZenBook in line with the likes of Samsung’s £649 Galaxy Book and Xiaomi’s MacBook Air competitor, the ~£800 Xiaomi Air 13.

Despite many laptops in 2017 offering 4-in-1 technology (or at least a touchscreen display), Asus keeps it simple with the latest addition to the ZenBook UX series, the ZenBook UX410. There’s no odd folding angles or touchscreen interactivity – instead, Asus offers an impressive display in a tiny chassis.

The lightweight and portable design means it’s easy to transport the ZenBook UX410 between work and home for those constantly on the move.

It’s not just the lightweight nature of the ZenBook UX410 that makes it so attractive – it also comes in two colour options (Rose Gold and Quartz Grey) and boasts an aluminium-alloy lid featuring the ASUS spun-metal finish present on much of the ASUS laptop range.

The entire laptop has also been covered in a glossy coating for a shiny finish, adding to the premium look and feel. It certainly is a stunning laptop, there’s no doubt about that – and we haven’t even discussed what you’ll find when you lift the lid.

Despite featuring a slim chassis usually used with 13in displays, Asus has managed to pack a 14in display inside the UX410. This is thanks to the NanoEdge Display technology employed by the company, allowing the display to feature smaller bezels (6mm) that make the snug fit possible.

The snug fit also provides a higher-than-average screen-to-body ratio of 80 percent, adding to the ‘wow’ factor when you lift the lid and the display turns on.

The difference between it and a standard trackpad is instantly noticeable – it’s more responsive and accurate than most we’ve seen – but it does take a while to adjust your taps and swipes to the accurate trackpad.

You’ll also find a full-size keyboard that features specially designed ‘Solid Scissor Cut Design’ key mechanisms that provides a more stable and accurate keypress. The tiny 1.6mm travel distance means you can type with both speed and accuracy, and is more than enough for everyday use. You can even use it in low-light conditions thanks to the backlit keys.

It should be more than enough for most users with the ability to plug in multiple peripherals at once, while the inclusion of a USB-C port makes the UX410 somewhat future-proof.

Before we delve into the specs, let’s first look closer at the impressive display featured on the ZenBook UX410. As mentioned above, it’s a 14in Full HD (1920×1080) display that fits into a 13in laptop chassis. That’s due to the inclusion of NanoEdge Display technology that provides impressively thin display bezels, but that’s not all it provides.

The 14in display is crisp, bright with impressive viewing angles and a matt finish that’ll negate most reflections. The combination of display and resolution provides a pixel density of around 276ppi which is by no means the best quality display on the market, but is more than enough for everyday use.

It’s time to talk specs and performance, the most important part of any PC or laptop. There are two versions of the ZenBook UX410; the base model has an Intel Core i3-7100U @ 2.4GHz along with 4GB of RAM, a 128GB SSD and Intel HD Graphics 620 to provide the oomph in the graphics department. That’s the version we’ve been using, and will set consumers back around £599.

Also, for those for whom only a Core i7 will do, check out the UX430. It’s very similar to the UX410, but comes in a few extra hues including a rather lovely blue and also rose gold.

Both models feature an integrated webcam and microphone array above the display for use with Microsoft’s virtual assistant, Cortana. There’s also Bluetooth 4.1 and Wi-Fi 802.11ac across both models.

Asus has also worked with Harman Kardon to develop the speakers used on the ZenBook UX410 to provide speakers that are both above-average in terms of sound quality and louder than much of the competition too.

Don’t get us wrong; it doesn’t have the clarity of normal desktop speakers, but it’s richer and clearer than the tinny audio usually produced by laptop speakers, and is more than enough for Netflix binges.

Asus claims around nine hours of battery life on a single charge of the ZenBook UX410, something that we can stand behind after using the laptop. This will of course depend on what you’re doing on the laptop as gaming and video editing will drain battery faster than simply using Facebook, but it should be enough for standard use at work, college or university.

Let’s talk benchmark results. As mentioned above, we’ve been using the £599 base model ZenBook UX410 and our benchmarks reflect that price tag, but be aware that better performance is be available from the higher spec option.

Either way, we found the seventh-gen Intel i3 processor to be sufficient for everyday use when coupled with an SSD and 4GB of RAM, handling everything from browsing multiple tabs in Google Chrome to playing music on iTunes.

It’s when you try to play games (even basic games like Rocket League on the lowest settings) that the graphical limitations of the laptop become apparent, and this is reflected in our results.

Let’s start with Geekbench 4, which tests the CPU of the laptop. The ASUS ZenBook UX410 managed to score 2583 and 5389 in single- and multi-core respectively. Unfortunately, we can’t directly compare it to the UX310 as Geekbench 4 wasn’t available at the time and Geekbench 3 offers a slightly different scoring system.

We can compare it to similarly priced laptops and 2-in-1s like the Samsung Galaxy Book and the Xiaomi Air 13 though. In terms of multi-core score, the ZenBook UX410 wasn’t quite enough to compete with either: the Galaxy Book managed 6680 and the Air 13 managed 6077.

Moving on from Geekbench 4, the next benchmark we ran was PCMark 8. This benchmark tests a little bit of everything and provides an overall productivity score for your computer, comparable to others on the 3DMark website. The ZenBook managed a score of 2680, again trailing behind both the Galaxy Book (3281) and Xiaomi’s Air 13 (2810).

The Asus ZenBook UX410 was not designed with graphical power in mind – if it was, the company would have included a dedicated graphics card instead the HD Graphics 620 it currently utilises.

With that being said, we don’t think it’s fair to judge it in terms of graphical performance – it can handle the likes of basic image editing but not much more. We’ll still include various GFXBench results below though, allowing you to compare for yourself.