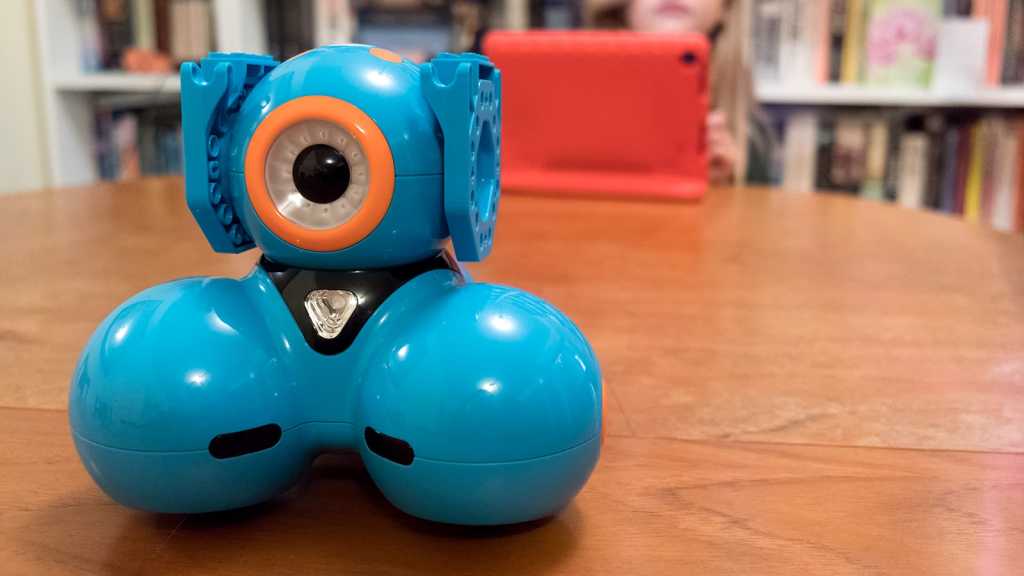 £150 is a lot of money to spend if you’re unsure whether Dash will appeal to your children, but Wonder Workshop’s spread of apps make it more likely that at least one will keep them coming back for more – at least in the medium term. My wish for a more advanced coding app for Android/FireOS – and a larger house – aside, I can’t really fault Dash. Wonder Workshop has created a learning tool that my children have found engaging and helped sparked their imagination about what coding is for, as well as giving them some understanding of the technical side of it. And after a couple of months of semi-regular use, they’re still interested in exploring it further.

Learning to code is now as much part of your children’s education as long division, conjugation of verbs and that rhyme about the six wives of Henry VIII (or at least it should be). Alongside code-teaching apps like Scratch and Swift Playgrounds, we’ve seen physical robots, toys and systems launched to bring code outside of your computer or tablet.

Wonder Workshop’s Dash is the latest of these I’ve seen. Aimed at children aged 6-11, it’s a six-inch-tall stack of spheres that scoots around merrily on three wheel under each part of its body – with a head on top that can move independently. Both its head and body are covered with lights that you can control, and it can see, hear and speak in limited ways.

Control is performed through a series of five apps for iOS or Android, with the three key ones also available for FireOS – useful if, like me, you’ve bought your kids Amazon FireHD tablets so they’ll leave your iPad alone. All of the apps include tutorials to help your children (and you) learn how to build increasingly complex programs, before setting you all free to code away.

There are many reasons why your children might benefit from adding ‘real-world’ component like Dash to their coding. They may find learning and coding with something that physically responds more interesting than working purely in an app. A robot like Dash feels more real than a digital character – cuter and more endearing. This is helped by its ability to turn its head to where your voice is coming from – if programmed to, of course – so that it appears to be looking at you and listening.

Dash also aids comprehension. Most child-focussed coding tools involve programming a character to move, either as an action or reaction to certain stimuli. But, especially with younger children, it can be hard to see the virtual world their characters live in from the perspective of that character – for example, to know whether they should turn left or right. In the real world, they can just go stand behind Dash and work it out.

A physical toy also helps children build a better idea of what coding is for. As with algebra and much of science, learning to code is as more about providing children with the correct mental models of how it all works than learning specific programming languages – so they’re both prepared for further study when their older (if they want to be programmers or data scientists or whatever) or just have an underlying understanding of how technology works (if they don’t).

Robots like Dash show children than coding isn’t just about pushing pixels around behind a screen, but is used to control physical systems from your house’s heating system to space rockets.

They also make coding a more shared, collaborative experience. Two children sharing one robot might sound like a recipe for contrast squabbling – which I’m not denying did happen – but it encouraged collaboration in a way you just don’t get if my kids were sitting there on their separate tablets with Scratch Jr. This could be as simple as one triggering the code while the other was an obstacle that had to be avoided, to more complex interactions. As creating code – whether from a tutorial or ‘free’ – generally takes much longer than Dash does to execute it, it’s also pretty easy for two children to share one robot when working independently.

A real robot also offers some neat science lessons along the way. For example, Dash doesn’t actually turn his wheels, he just spins one faster than the other. Your child can set the speeds for each wheel individually, getting them to understand the physics behind this through play and experimentation.

Lastly, Dash’s physicality also appears to us parents who worry our children are spending too much time on their tablets – as we can convince ourselves this is more like playing with Mecchano than sucking up a screen.

Dash is a happy robot

Dash is a cute pyramid of spheres with a head that can move independently. Turn it on – after charging it over USB – and it dances happily, letting off little oohs and woos as it goes.

Its cyplopian eye has 12 white LED segments that can turn on and off and get brighter and darker independently – so yes it can wink – and there are lights on its front and sides that can change to many different colours. 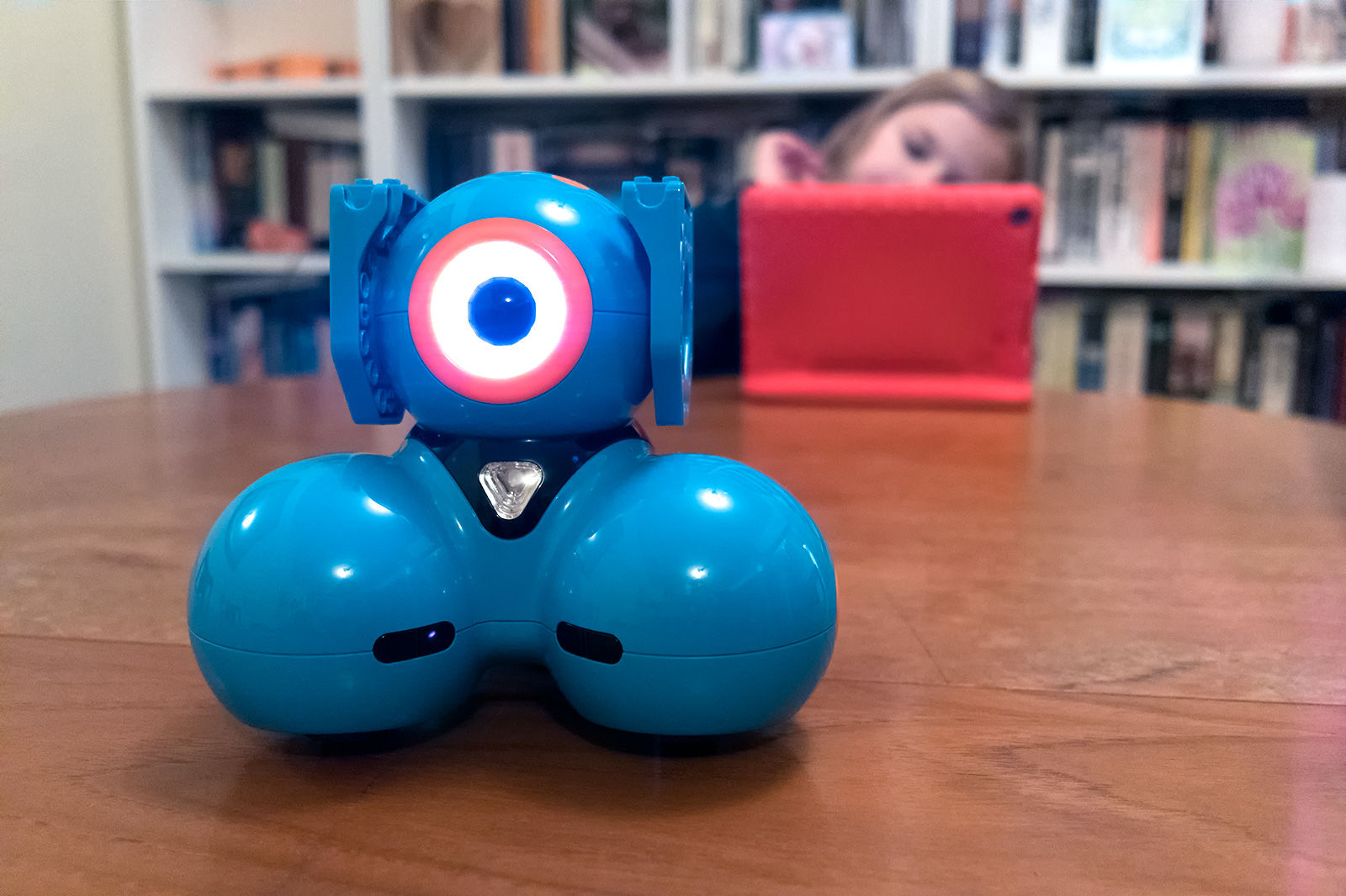 Dash can – in its own way – speak and listen. There are preset sounds from exclamations of ‘Ta Da!’ to animals noises. You can record your own, which are distorted into a slightly tinny squeaky falsetto to match Dash’s own. The choice of voice and mannerisms – as well as some of the physical design touches – owes some debt to Despicable Me’s Minions.

As your own little minion, Dash is well behaved. It can listen for claps to trigger commands in your programs (or you can set it off with a big button on its head), and can detect when there are obstacles in front of it.

Dash generally glides around elegantly, but we did find a few flaws here. It’s preset movement patterns sometimes require more space than my quite-large-for-the-UK front room has (Dash is from the US, where houses are generally more spacious, and it needs a space of around 2m x 2m). Its little wheels also had trouble spinning on a thinner rug, so it might have issues with thicker pile carpets too.

In the box are two clip-on ears with Lego studs on their top, which allow you to build hats, and trays to carry around and whatever else you come up with.

Wonder Workshop also sell a series of accessories for the Dash including the Dot companion, a xylophone, a catapult and more. I didn’t get to try these, but they look interesting – especially the Dot for exploring how programs communicate with each other (though I’m wary of letting my kids use the catapult, your children may vary).

Dash costs a not-insignificant £150/US$150 from Apple or Wonder Workshop itself (in the US only) – though you can get it from at least a tenner less from Amazon. You can also get a bundle with Dot for £199.99/$199.99 from Amazon or Wonder Workshop – plus bundles with accessories for extra savings.

Dash robot has apps for everyone

Wonder Workshop has created four main apps for use with Dash – plus one specifically for the xylophone that’s iOS and Android-only.

All of the apps are colourful, and both of my children found them fun and easy to follow without being boring – no mean feat considering they have differing interests and abilities, the eldest being autistic and more interested in how tech works, and the youngest more focussed on what it can do for her (and what fun she can have with it).

If your child hasn’t used a coding app before, you can start with Go and Line. If they’ve used Scratch Jr, they’re probably ready for Blockly.

Go and Line are the simplest. Go (below) is a remote control that lets you directly – ie, in a non-programmed way – drive Dash around, turn its lights on and off, and get it to speak. You can also trigger pre-programmed behaviours – little dance routines and the like. 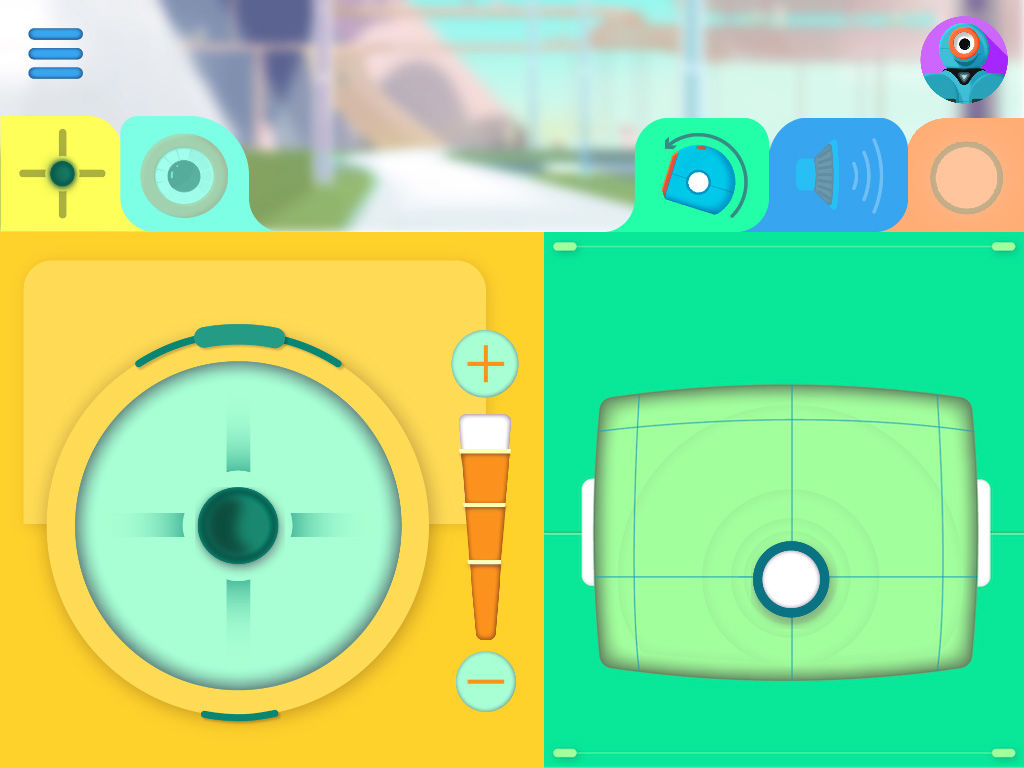 Using Go, Dash is little more than a glorified remote-control car – but it’s a really good intro to what Dash can do for younger children. Unfortunately, there’s no version of this for Amazon’s Fire tablets, which is a shame as sometimes my children did want to just to drive Dash around as part of playing imagintively with their toys.

With Line (below), you draw freehand a line of the path you want Dash to take, with as many loops and wiggles and you like. Dash follows this like a trained sheepdog. You can add actions for Dash to perform along the way, which gently introduces the concept of a computer program as a series of linear actions – before adding the complexity of multiple inputs triggering different outputs. 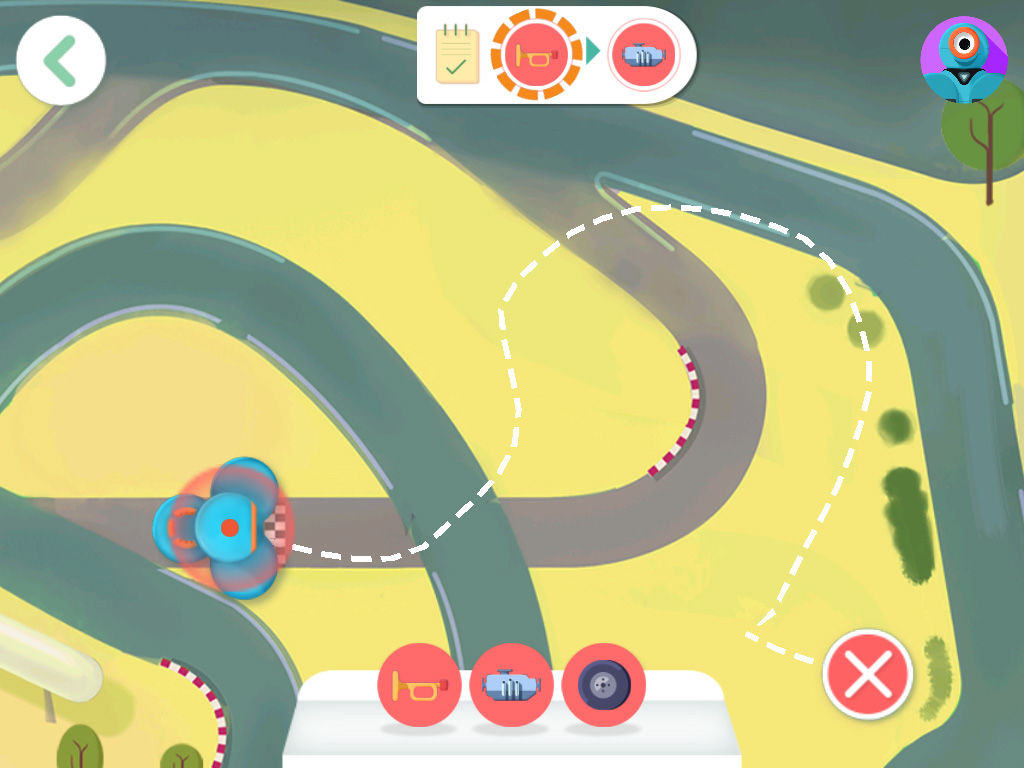 After mastering Line, you can move onto Wonder or Blockly. Which you go for depends on your children – Wonder is probably simpler for most children, especially those who learn best visually. Blockly is nearest to ‘true’ coding.

Wonder (below) uses a flowchart of nodes to build more complex programs. It’s a model used in everything from mapping business processes to the software used to create visual effects in Hollywood movies by mixing footage with CG robots, dinosaurs, explosions and the like. 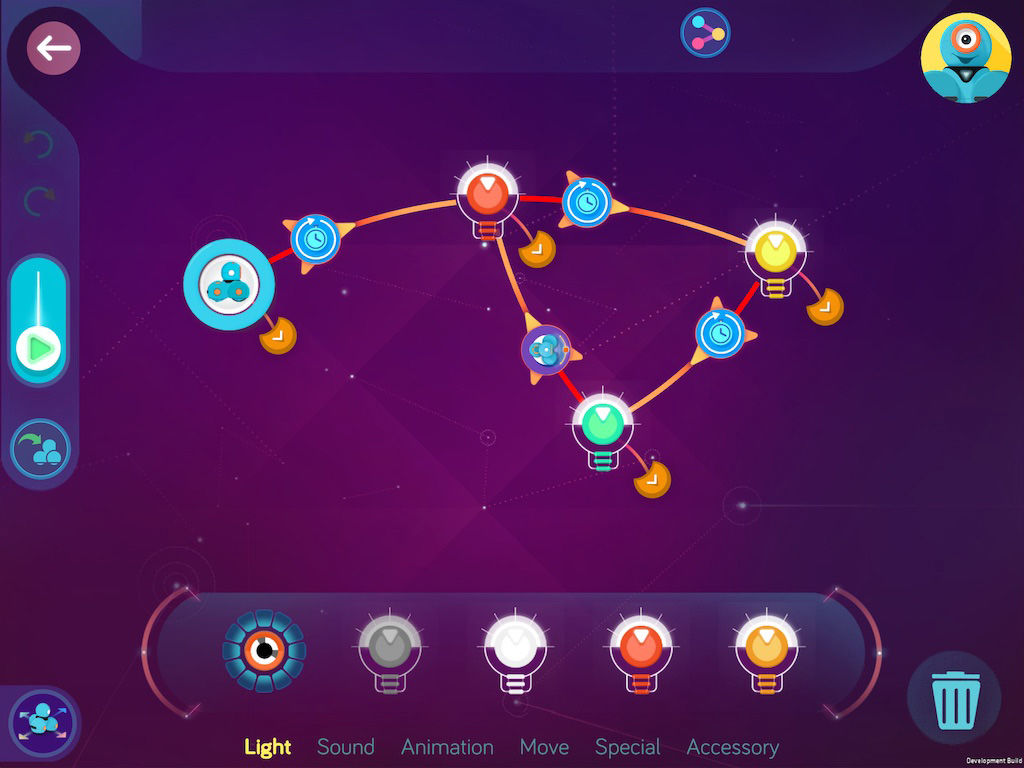 Flowcharts start from triggers – starting the program, touching a button, clapping their hands. You connect these to nodes representing actions or conditions, building complexity and responses to stimuli – looping the flows back on themselves to build programs that never really end, but bring Dash to life as it continues to act and react as it encounters things in the world.

Wonder is more about teaching the logic that underpins programming – and many other things – than coding itself. However, this in itself may prove more useful for your child in the long run as it encourages them to think about programs and platforms from a broad systems perspective, rather than concentrating on the intricacies of specific programming languages that may be outdated by the time they grow up.

You can share creations with other children online – though there’s no communication between users (a definite benefit from a safeguarding perspective) – and download flows others have created. These are great if your children like to pull apart others creations to find out how they work.

The final app – though possibly where you’d start if your children have already spent time learning something like Scratch Jr – is Blockly (below). This is essentially a less complex version of Scratch – constrained by the physical abilities of the Dash robot. 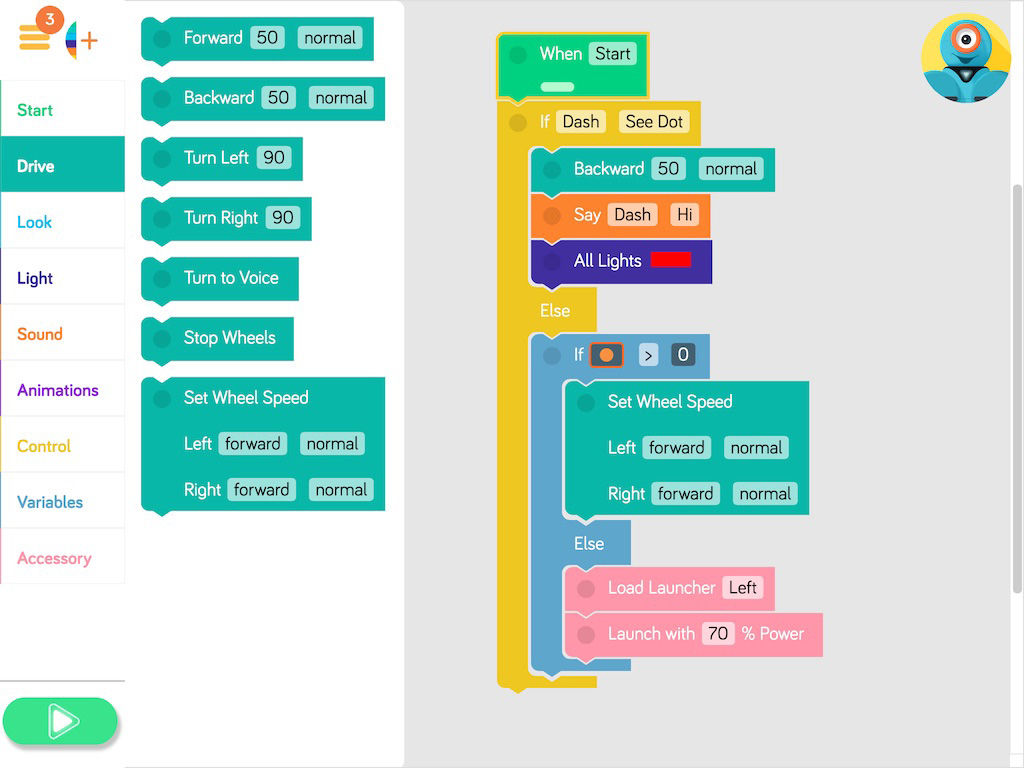 As with Scratch, you build stacks of commands with loops and If/Else conditions to drive its behaviour – and it’s the nearest to actual programming.

Unfortunately, that’s where your ability to code using Wonder Workshop’s apps with Dash ends. You can use Dash with Apple’s Swift Playgrounds – where you can write code as well as building Lego-like components together – but nothing in Wonder’s otherwise-brilliantly-clear instructions mentioned this. I only discovered it through an inadvertent Google search.

Swift Playgrounds is an excellent app for that next step – but I do wish there was something similar to work with Dash on Android and FireOS.