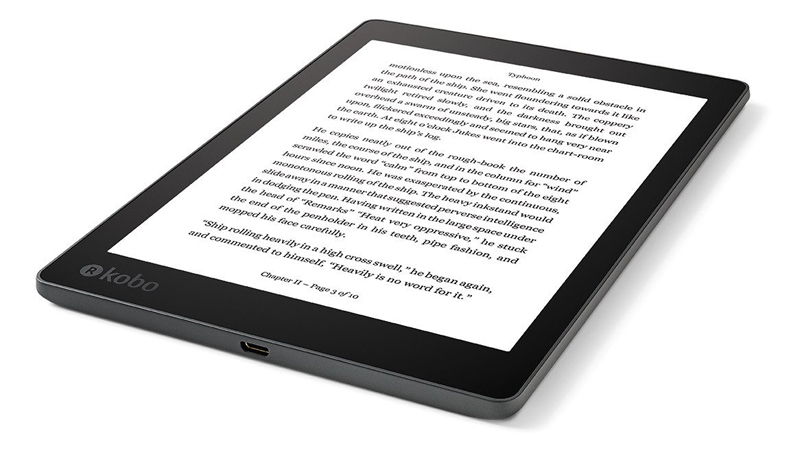 The price might seem off-putting at first (after all, it’s possible to get a Kindle for a third of the price, if you’re willing to put up with ‘special offers’, or £70 if you’re not) but there’s plenty here to justify the expense. The Kobo Aura One is way ahead of Amazon on waterproofing, for one thing, and that’s no small matter for a big section of eReader users – anyone reading by the beach or swimming pool on holiday, or in the bath back home. It’s also got a lovely big (7.8in) screen by eReader standards, tucked into a sleek chassis that’s not much heavier than the 6in Kindle models (and actually lighter than one of them). And the screen is sharp and equipped with night-time reading features that will help you get a decent sleep. But while the reading experience is good, getting books on to your Kobo in the first place is less of a pleasure. The Kobo store is lightyears behind Amazon’s Kindle store, in terms of curation if not size, and while you can side-load eBooks from elsewhere (provided they are DRM-free), you miss out on some of the Kindle features that make library management easier, such as free 3G and wide cross-device syncing. The one exception is OverDrive, an excellent way of borrowing high-quality library eBooks for free, which is better supported here than on Kindle. But the relatively small selection we’ve seen in our local library at any rate suggests this should be regarded as a nice bonus rather than a primary source of reads.

Amazon has achieved in the eReader market what Google has done for search engines: made itself generic. To the average member of the public, buying a Kindle is a general intention, not a buying decision.

But it is a decision, and there are alternatives, from companies such as Kobo. In this article we review the Kobo Aura One, a large-screen eReader with exceptional water-resistance and good night-time reading features. 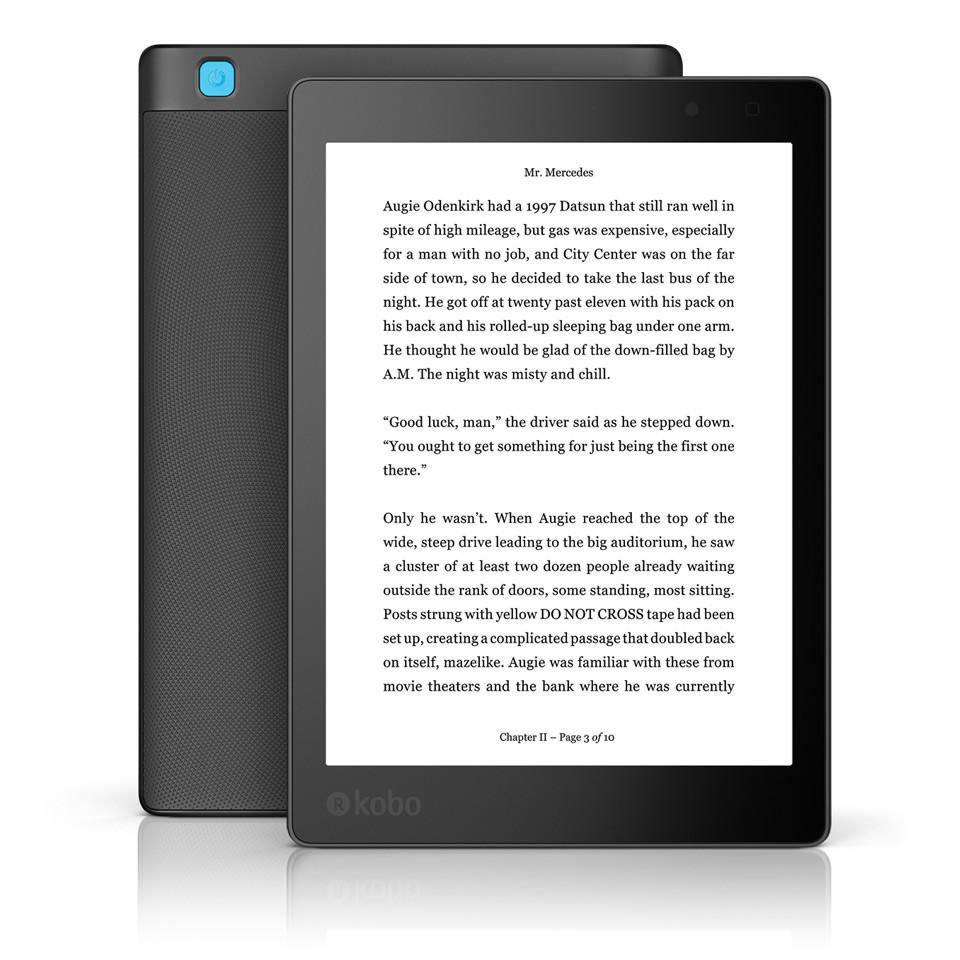 The Aura One is a plain, somewhat generic-looking, slightly larger-than-average eReader. The front, admirably, is the sort of design that tries not to be noticed, presumably to place all attention on the book you’re reading; there are no visible buttons, and even the Kobo logo, dark grey on black, is barely noticeable (except in some of the company’s brightly lit press photos). In use the product is essentially a thick black rectangle around the edges of a book.

The One is almost perfectly flat on the front, with no detectable difference between bezel and screen under the finger, just a narrow and very low rim around the very edge of the device. But the gently curved rear of the device is a different matter, with swirly grip texturing and a large debossed logo at the top right, along with a bright blue power button to complete the decoration. It’s nice to hold and not drop-prone. 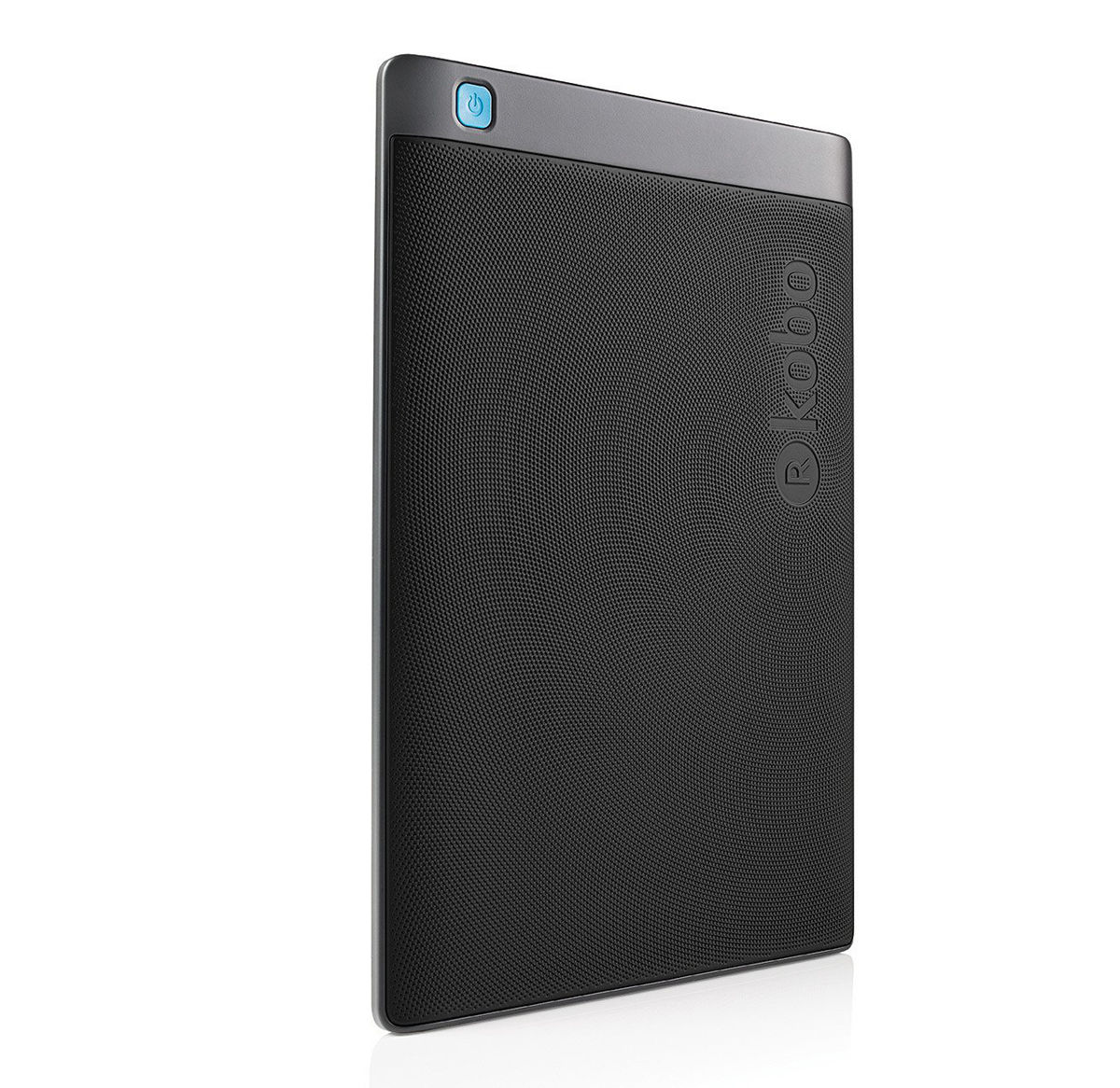 The size – well, we’ll come back to the benefits of that larger screen in the next section, but note that you pay for this in terms of portability as well as price.

It’s still a great, light, one-hand design that fits easily in the smaller pockets of a rucksack, but in certain ways you may notice its slight extra width – you might have been able to fit a Kindle in your handspan or jeans pocket, for instance, but struggle to do the same with this. Check the dimensions in the specs section, cut out a piece of cardboard matching them, and spend a few moments seeing how much the extra size is going to bother you.

The device feels cheaper than it is – lightweight, uncolourful, plasticky – but that tends to be the case with eReaders. And in an odd sense this is rather reassuring, since it feels like it would probably be fine if you dropped it.

And if you dropped it in the swimming pool you really should be okay, because this reader offers IPX8-rated water-resistance – the company boasts that it can survive up to 60 minutes in 2m of water. Kindle owners still have to buy waterproof cases for their devices, and this is a big advantage for the holiday market; strange, really, that Amazon still hasn’t caught up since the Aura H20 offered similar back in 2014.

The touchscreen display measures 7.8in diagonally, and has a resolution of 1872 x 1404 at an impressive 300ppi. (Your basic starter Kindle has around half that, but all Amazon’s models at this sort of price are 300ppi.) It’s a mono E Ink display, which means excellent battery life and reduced eye strain, but you do get that tech’s characteristic slow ‘dissolve and reappear’ refresh style – despite the 1GHz processor this isn’t a fast-responding touchscreen, so expect a half-second delay between swipe and action.

At 7.8in the Aura One offers roughly 70% more screen space than the standard 6in offering of the Kindles. You’re pretty much getting the area of a standard B-format paperback, which makes for a pleasant reading experience – there’s less need to either squint at small type or crank it up so much that you’re constantly turning the page. 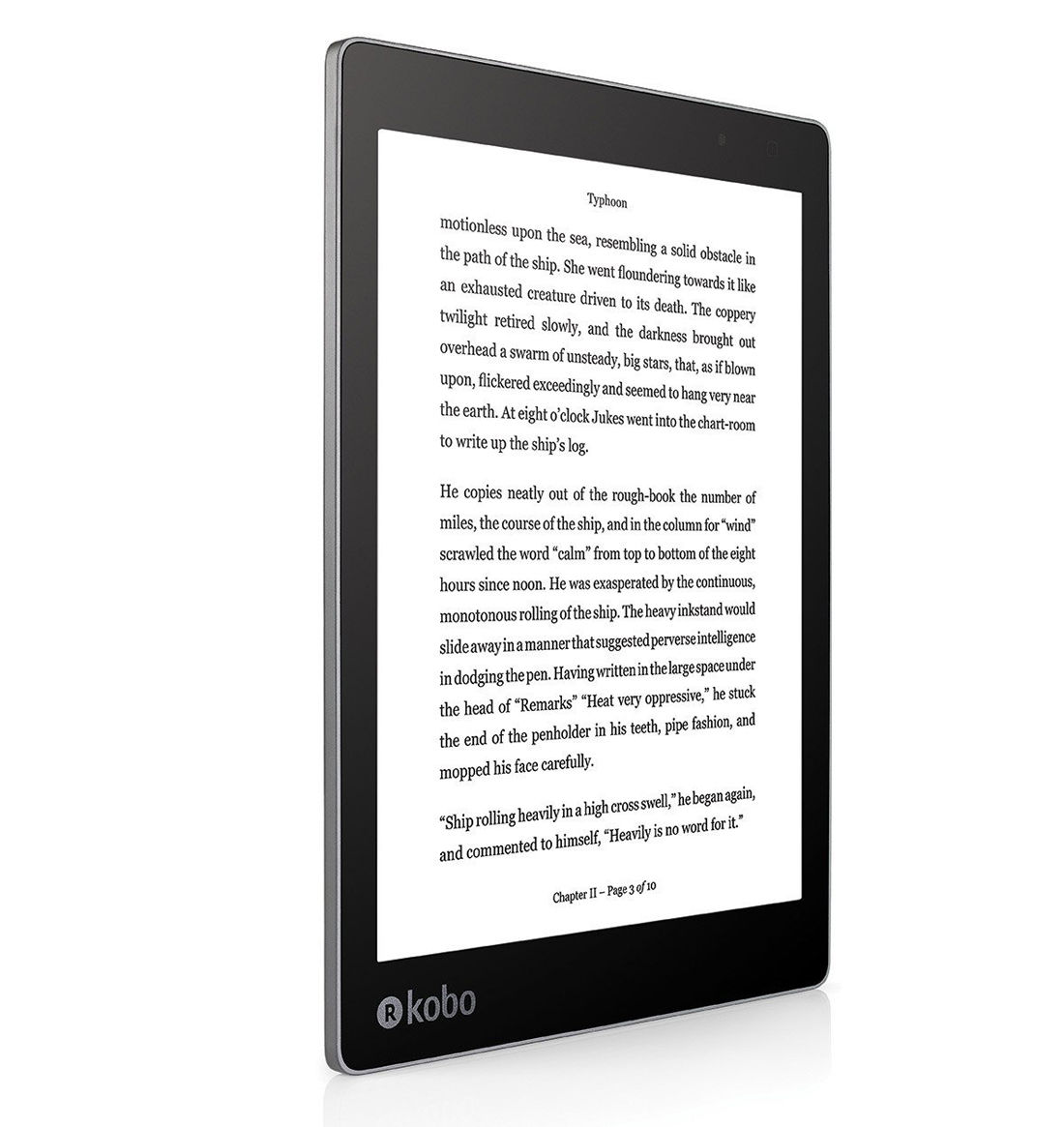 Talking of which, Kobo continues to offer a good range of reading customisation options, although this is an area where Amazon has largely caught up. You get a choice of 11 fonts, an astonishing 50 type sizes and control over brightness and lighting.

The Aura One has front-lighting (rather than the backlighting which shines the light through the panel, E Ink displays with this feature shine light on to the display) and this is able to adapt to ambient lighting conditions. Kobo boasts that its ComfortLight PRO tech automatically selects optimal colour temperature to help your sleep patterns (even white light has blue and yellow components) and while we can’t offer a scientific verdict on this it seemed restful, and placebo effect or not we slept well after nighttime reading sessions.

There are lots of ways to load eBooks on to the Aura One, but the most obvious – and of course the one Kobo wants you to use, since the company gets a share of the revenue – is to buy books directly from the Kobo store. And if you’re used to browsing the Kindle store, this may be a disappointment.

This isn’t a question of the debatably smaller library. (Kobo is cagier with exact numbers than Amazon, but talks about “more than five million titles”; at time of writing the Kindle store returns 5,696,052 results for eBooks, but official estimates put it closer to seven million earlier in 2017.) Both libraries are so vast that you’re unlikely to run out of appealing options, and a brief browse suggests that new titles appear in each store roughly simultaneously.

Rather it’s a question of curation and discoverability. Amazon’s front page is appealing, tailored to the user, and stuffed with tempting options; Kobo aims for the same things but falls short, giving the impression that’s it’s just showcasing whatever’s selling well or has been uploaded most recently, no matter the quality or suitability. 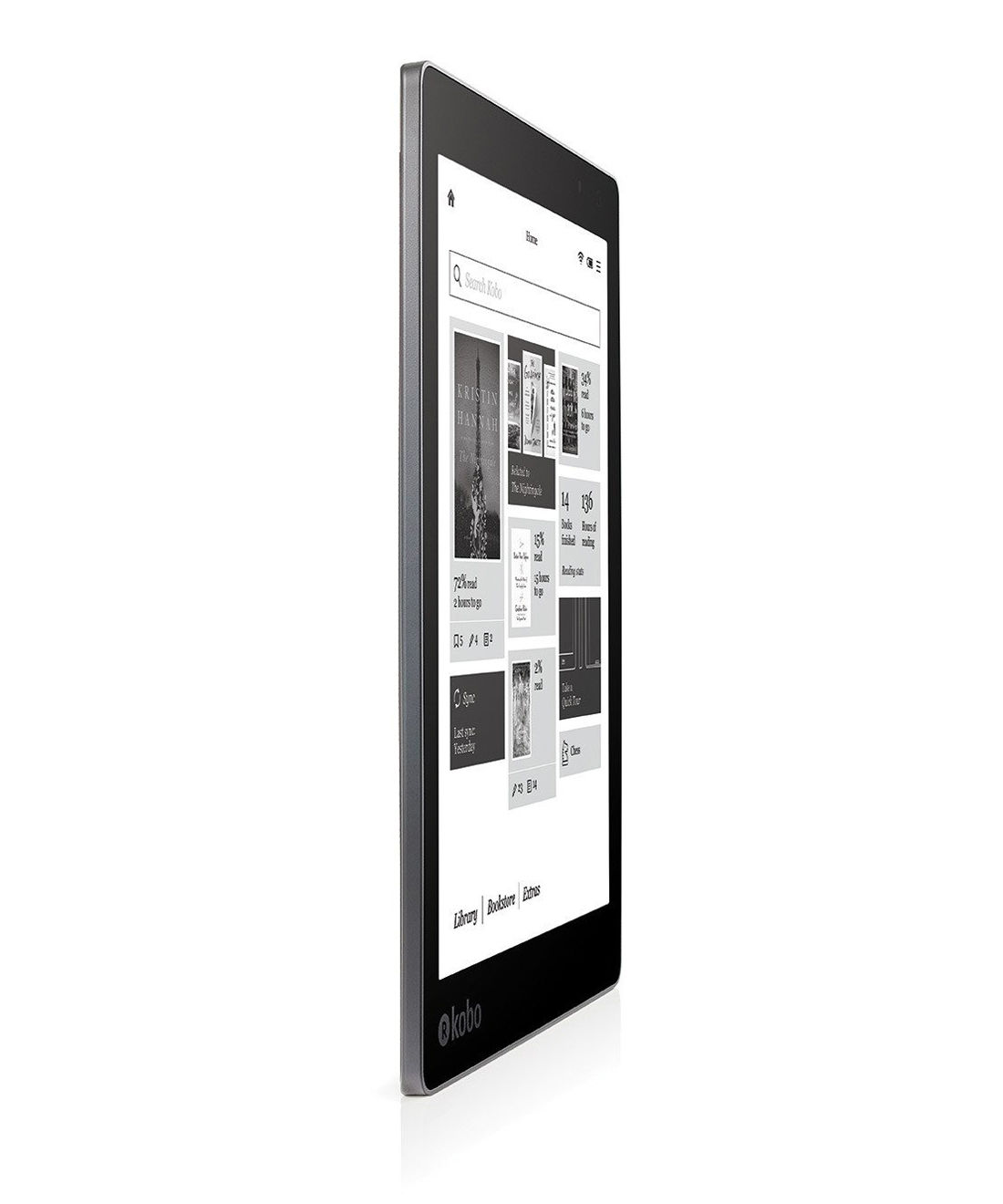 Fortunately there are alternatives. If you’ve got DRM-free eBooks in one of the numerous formats supported by the Aura One – and with the right plugins you can even prepare Kindle purchases for this treatment – you can plug it into your PC or Mac and drag-and-drop them on to the device (you can’t email books to the system, though, and it’s not good at syncing eBooks other than Kobo store purchases across multiple readers). You can also save web articles to Pocket and they’ll show up on your reader.

But the method we’re most pleased by is called OverDrive. This is a service (and a mobile app) that lets you borrow eBooks from your local library, assuming you’re a member and have obtained a PIN for online reservations and so on. The selection isn’t huge but it’s free, and unlike a lot of the free eBooks you see in other places – the out-of-copyright classics on Kobo’s store, for example – the formatting is up to commercial standards.

Your local library will have a limited number of digital copies and in our experience you will probably have to ‘return’ it after a shorter period than with physical books (a fortnight, in our case, as opposed to the three weeks we get normally). But you don’t need to do anything – it just vanishes at the correct time, so there’s no danger of late fees.

OverDrive is a nice bonus feature that isn’t built into Kindle readers in the same way. (It is possible to get OverDrive books on to a Kindle, but it’s more difficult.)