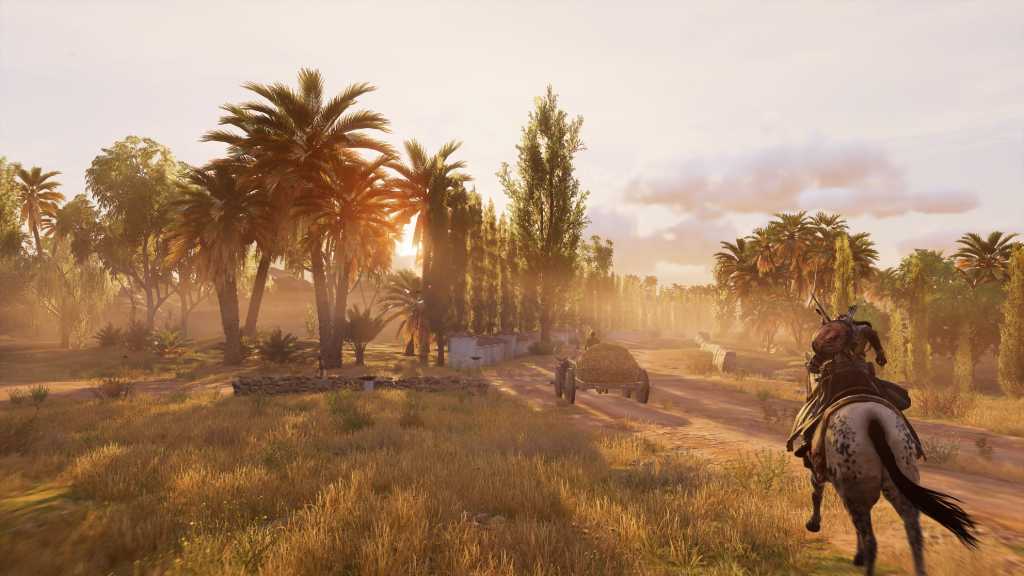 Assassin’s Creed Origins is the most in-depth and enjoyable title in the Assassin’s Creed series so far, and ancient Egypt is the perfect location to showcase it. The redesigned combat mechanics make battles fun while still providing a challenge and a tactical element for those that want to exercise their minds. Senu, the Eagle, is a fantastic Egyptian take on Eagle Vision and compliments gameplay perfectly. Combine that with a detailed and vibrant environment and a storyline that Hollywood writers would be proud of, and you’ve got one of the best games of 2017, hands-down.

After taking the franchise back to the drawing board, Ubisoft’s  Assassin’s Creed Origins promises to reinvent the series with improved combat, more engaging missions and an incredible open world environment: Ancient Egypt.

But has Ubisoft done enough to tempt gamers back and cement Origins’ place as one of the  best games of 2017? We’ve spent some time exploring Ancient Egypt in Assassin’s Creed Origins, and here’s what we think.

Assassin’s Creed Origins is out now, not only on PS4 and Xbox One (with support for  PS4 Pro and Microsoft’s new  Xbox One X) but also PC.

If you want to get into the serious special editions, the place to head is the  official Ubisoft store. There’ll you’ll be able to order the game’s  Standard,  Deluxe, and  Gold editions, along with the limited  God’s,  Dawn of the Creed, and  Dawn of the Creed Legendary editions – the latter of which costs a frankly ridiculous £699/$799. 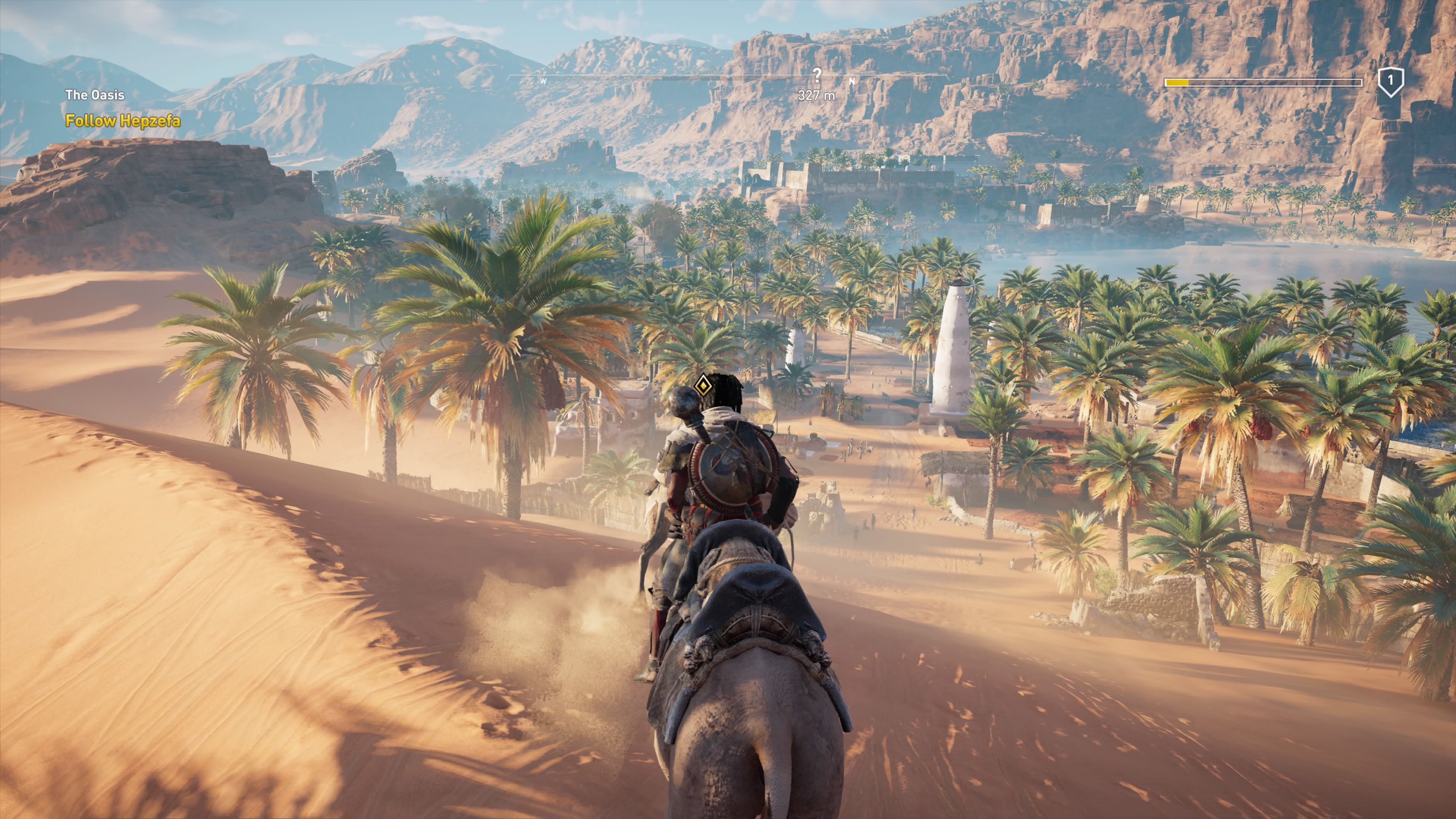 The game sheds some light on the beginnings of the Templar Order, or the ‘Order of the Ancients’ as they’re known as in Origins. While Bayek and the Brotherhood fight for peace by promoting freedom and liberty, the cabal known as the Order of the Ancients desire peace through the forceful imposition of order.

It’s the perfect environment for an Assassin’s Creed title, offering a wide and varied open world to explore and many mysteries to uncover. But what makes Origins so different from the host of titles that came before it?

Ubisoft claims that Origins re-invents the Assassin’s Creed franchise with reworked mechanics that breathes fresh air into the aging series – and for the most part, we agree. The original Assassin’s Creed formula is present, but the game is more enjoyable than any before it. 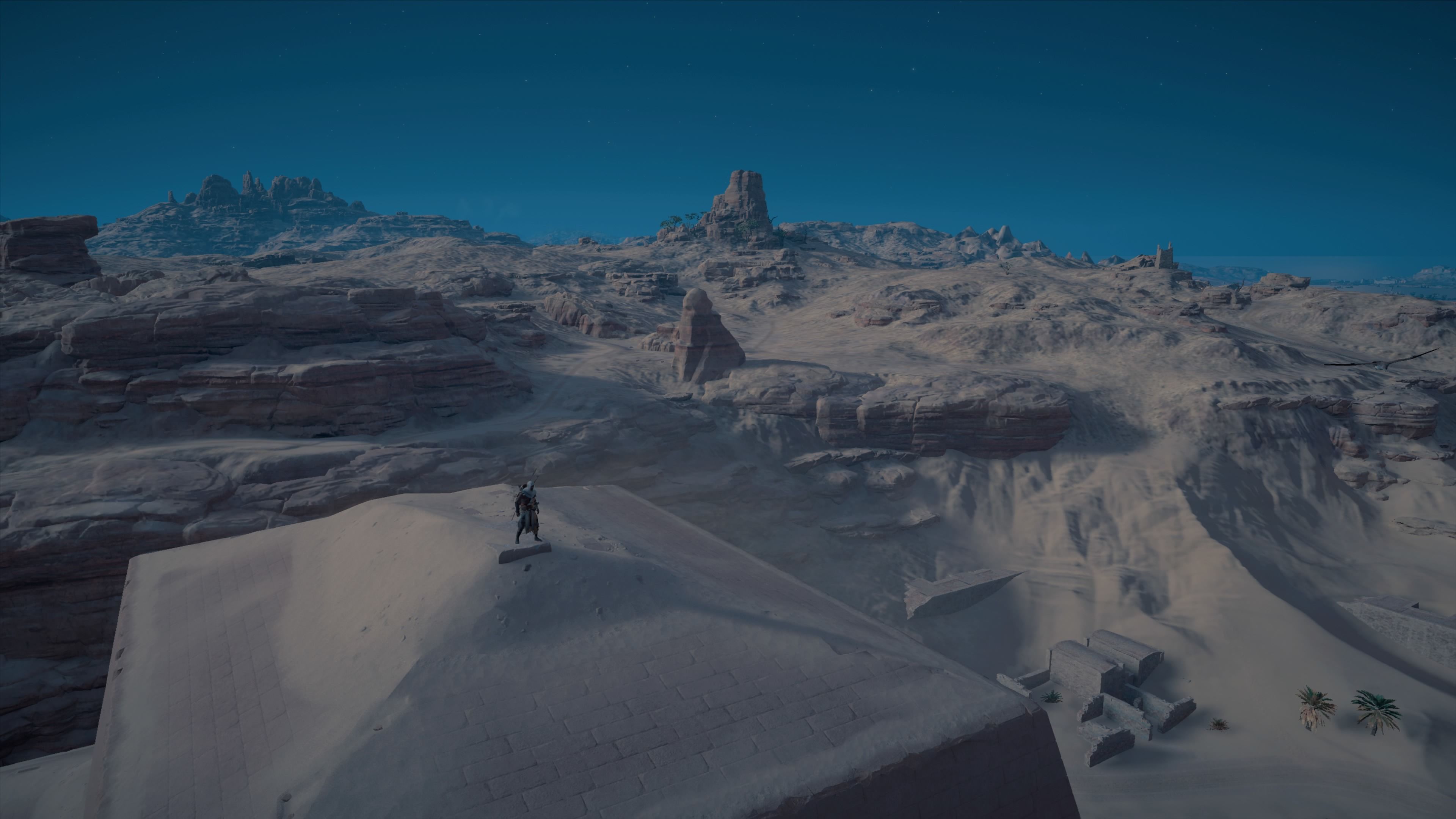 First up, you’ve got the overhauled combat system, arguably the biggest criticism in earlier Assassin’s Creed titles. Historically, groups of NPCs (non-player characters) that want to attack you would ‘wait until their turn’ because the system only really supported one-on-one combat. It wasn’t realistic, and broke the immersion of the game.

That is a thing of the past in Origins. Although it took a little getting used to (especially using the shield and parrying), the new combat system allows for much more freedom and creativity, and allows you to skilfully take on multiple enemies at once. You can block and parry using your weapon (of which you have several types to choose from) and shield, before landing a series of light- and heavy blows that’ll take care of even the biggest of enemies.

It relies on a hit-box system rather than a paired animation system used in previous games. This essentially means that gamers can strike at whatever is in range at any given time (allowing you to hit multiple enemies with a single swing) and cause damage to individual body part, allowing the NPC to retaliate in a more natural way. It’s more fluid and natural, and is possibly the biggest improvement of the entire game.

It doesn’t make combat easy though – there’s still an element of skill and timing required to successfully take down a group of enemies, especially those backed up by warriors with heavy weapons and shields, forcing players to consider alternative ways to attack. But, now at least, you can fight your way out of a large group when the situation does arise.

Alongside the redesigned combat mechanics is a host of weaponry available to Bayek. There are several different types of sword, ranging from quick dual-swords that are deadly at close range to slow, powerful weapons that can take out a number of enemies in a single swing. There are varying levels of quality, and an RPG-esque rating system – common, rare and legendary. The best part? If you find a weapon you become attached to, you can take it to the blacksmith and upgrade it as you level up. 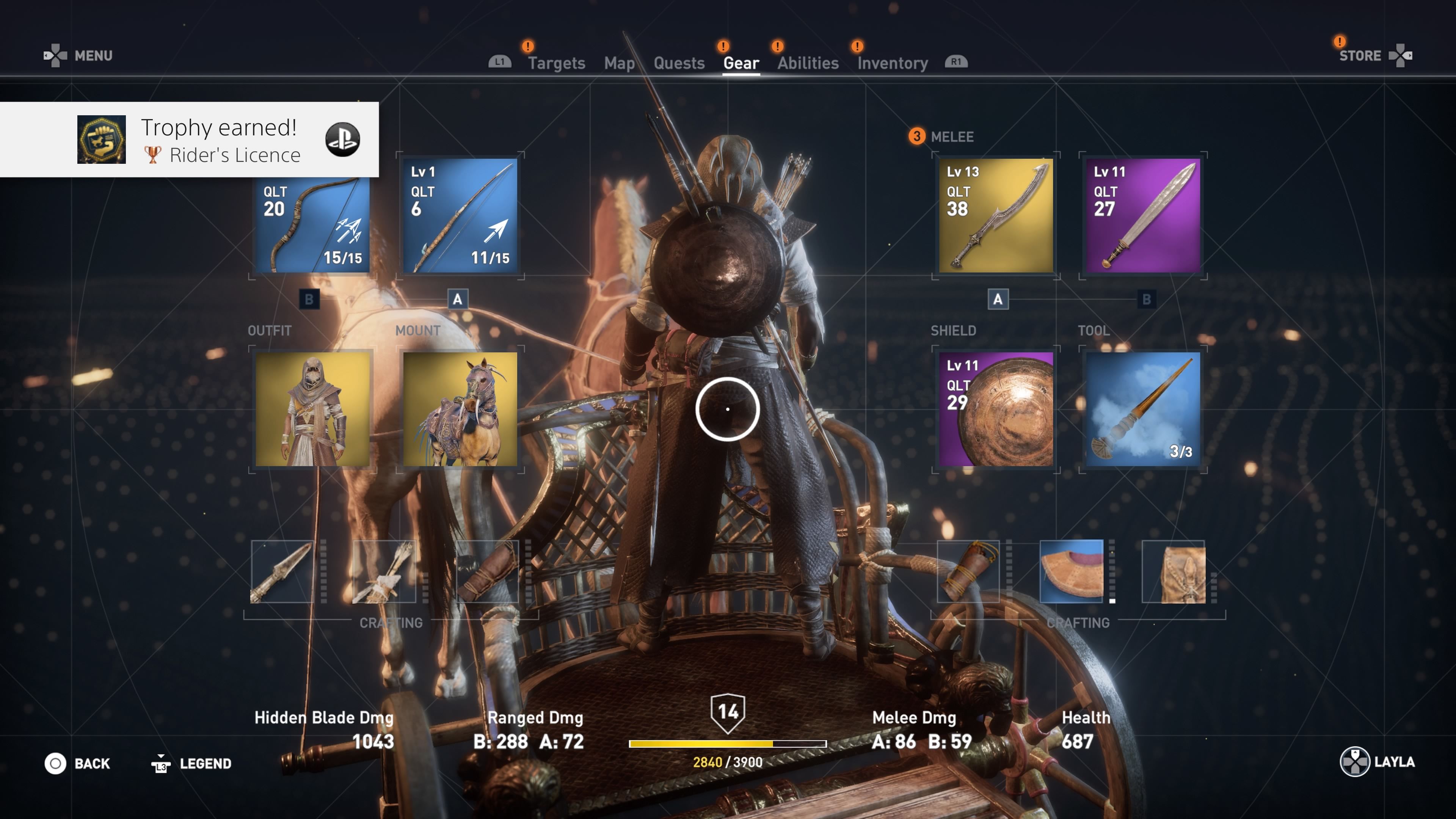 It allows you to customise your style of play – we preferred using dual-swords and dodging, but some may prefer to use heavier weapons with a shield to deal high damage at the right time. Assassin’s Creed gives you that choice, and it really enhances gameplay.

It’s a similar story with your bows too. There are four types of bow available depending on your situation. For example, the hunters bow provides damage at long-range while the warrior bow fires five arrows at once – think of it as the shotgun of the bow and arrow world. You can switch between your two favourite bows and weapons on-the-fly once you’ve upgraded your skill tree, allowing you to adapt to situations as they change.

The wide-branching skill tree is upgraded throughout the game, giving you access to advanced combat and exploration skills and providing a way to enhance your personal style of combat, again enabling you to focus on the areas that you personally use when playing the game. Ability points, the currency of the skill tree, can be unlocked by levelling up or exploring tombs and pyramids scattered throughout Egypt.

Free running has also had an upgrade in Origins; it’s not as easy as it has been in other games, but it does feel more natural than ever. When free-running around Egypt, you have to be a bit smarter about how you approach gaps between buildings as you won’t always automatically reach the ledge – sometimes you’ll take the leap of faith and miss.

You’ve also got to be more observant of surfaces and ledges that you can climb on, as climbable surfaces aren’t always easy to spot in Origins. This forces you to look out for things like small crevices on the side of a pyramid or jagged areas of rock on the side of a cliff that may be the only way to reach your objective.

Eagle Vision is no longer present in Assassin’s Creed Origins. Instead, you’ll have an eagle companion called Senu that you can summon at any time. It replaces many of the features of the old Eagle Vision mode, allowing you to scout not only enemies but objectives and other objects of interest (treasure, skins, etc) and plan a potential attack from the air. 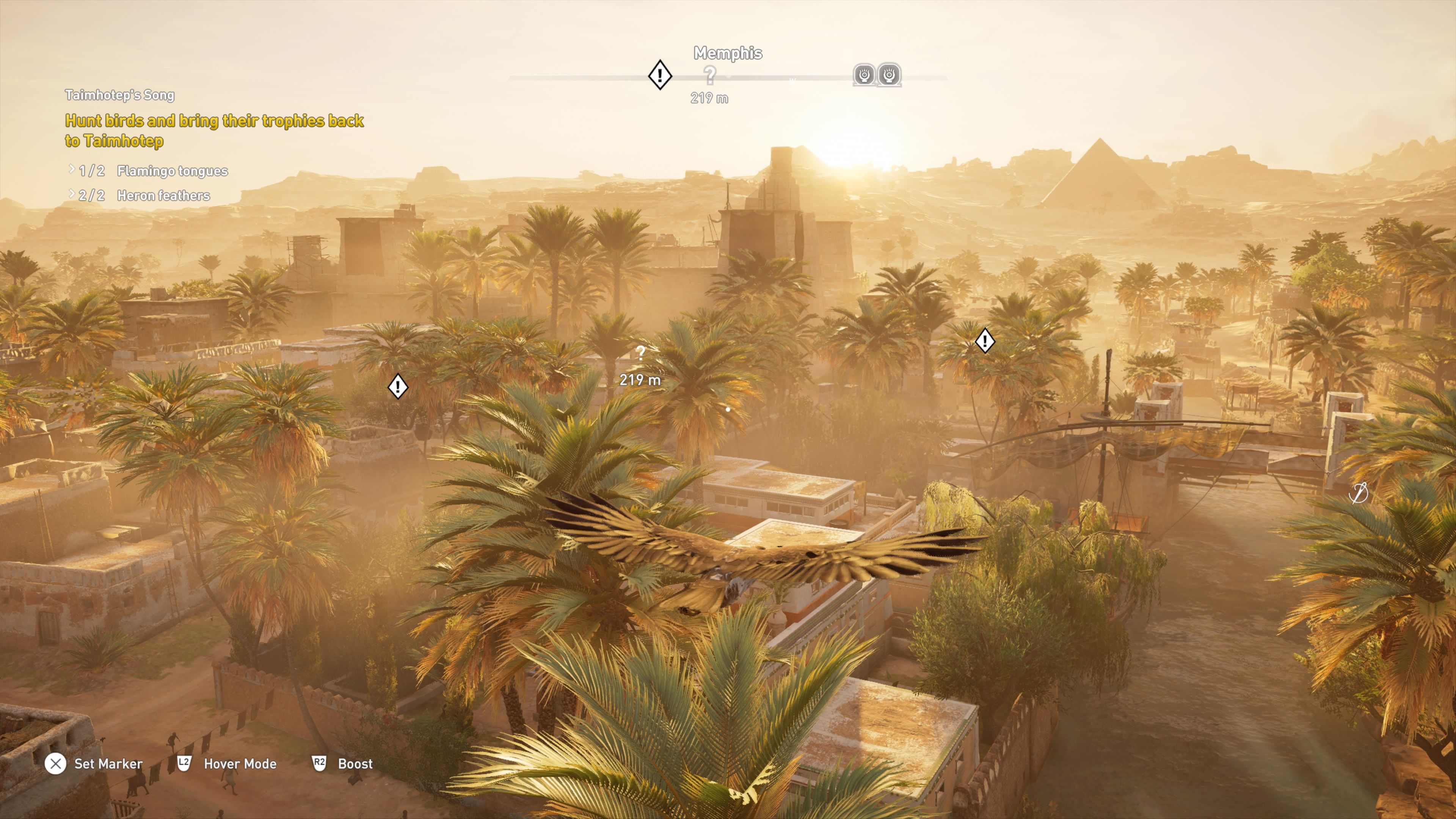 Senu is an invaluable tool in Origins, allowing you to assess the best way to approach a situation, whether it be stealing valuable items from enemy camps or trying to liberate prisoners. Besides the benefit to combat, it’s fun to fly around as a bird and it gives you a stunning view of Egypt.

Senu can also be used when exploring the open world on horseback, allowing you to get a wider view of the area and anticipate any incoming danger you come across while on your travels. It’s not something that’s pointed out when playing the game, but in our opinion, it’s the best way to travel long distances.

Speaking of the open world, it’s much more detailed and alive than previous Assassin’s Creed titles. There are no loading screens at all when exploring the many available regions, and the attention to detail is incredible. Environments feel alive, and will look different at different times of day; the markets of Memphis may look quiet in the evening, but they’re teaming with life when the Egypt sun is beating down during the day.

There’s also so much to do in Origins. Besides quests, you’ve got tombs to explore, points of interest to check out and things to collect, providing many hours of fresh and interesting gameplay. 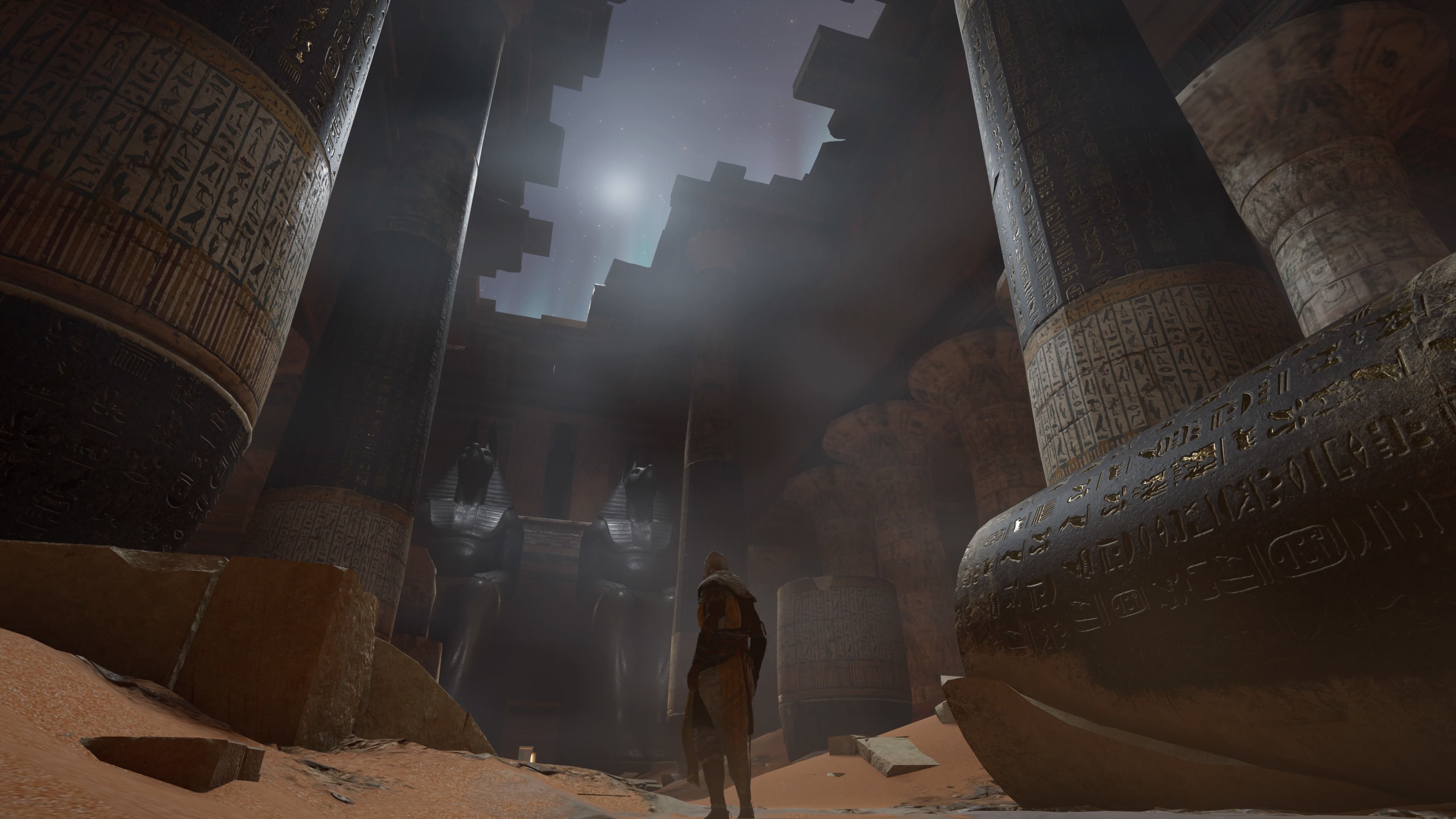 There are towers present in Origins, but these serve as fast travel points and activation isn’t a requirement like in previous games. These do, however, provide better perception for Senu, giving you a bit of motivation to synchronise whenever you reach a new area.

Even the NPCs are more intelligent than ever. Ubisoft has programmed every NPC in Origins with a ‘purpose’ – a will to do things and make the world feel more alive. Some NPCs may want to shop at the local bazar, while crocodiles will attack hippos (and sometimes people!) if they wander too near.

The nature of the NPC design means that unscripted events can naturally occur when you’re in the area. A nearby crocodile may attack a guard standing outside a camp you’re infiltrating, or it could be that local allies need back-up against both humans and animals. The world is alive around you, and makes you feel like anything can happen while exploring.

The storyline in Assassin’s Creed Origins is akin to that of a Hollywood blockbuster. It’s full of suspense, twists and turns and betrayal, providing an engaging story that’ll make you keep coming back for more. You’ll take on the Order of the Ancients and even Egyptian Gods, creating some of the most visually stunning and enjoyable boss battles we’ve seen in recent years.

We don’t want to ruin the plot, so we won’t say much more about it, but safe to say it’s our favourite story of any title in the Assassin’s Creed franchise.

In addition to main quests, side quests can be found throughout Ancient Egypt, and thankfully, they’re much more in-depth and engaging than in previous games. It’s not simply a case of following an NPC or retrieving a valuable item any more – the quests have a storyline behind them that sometimes arch over two or three missions, and can involve anything from rescuing people to assassinating targets and even horseracing. 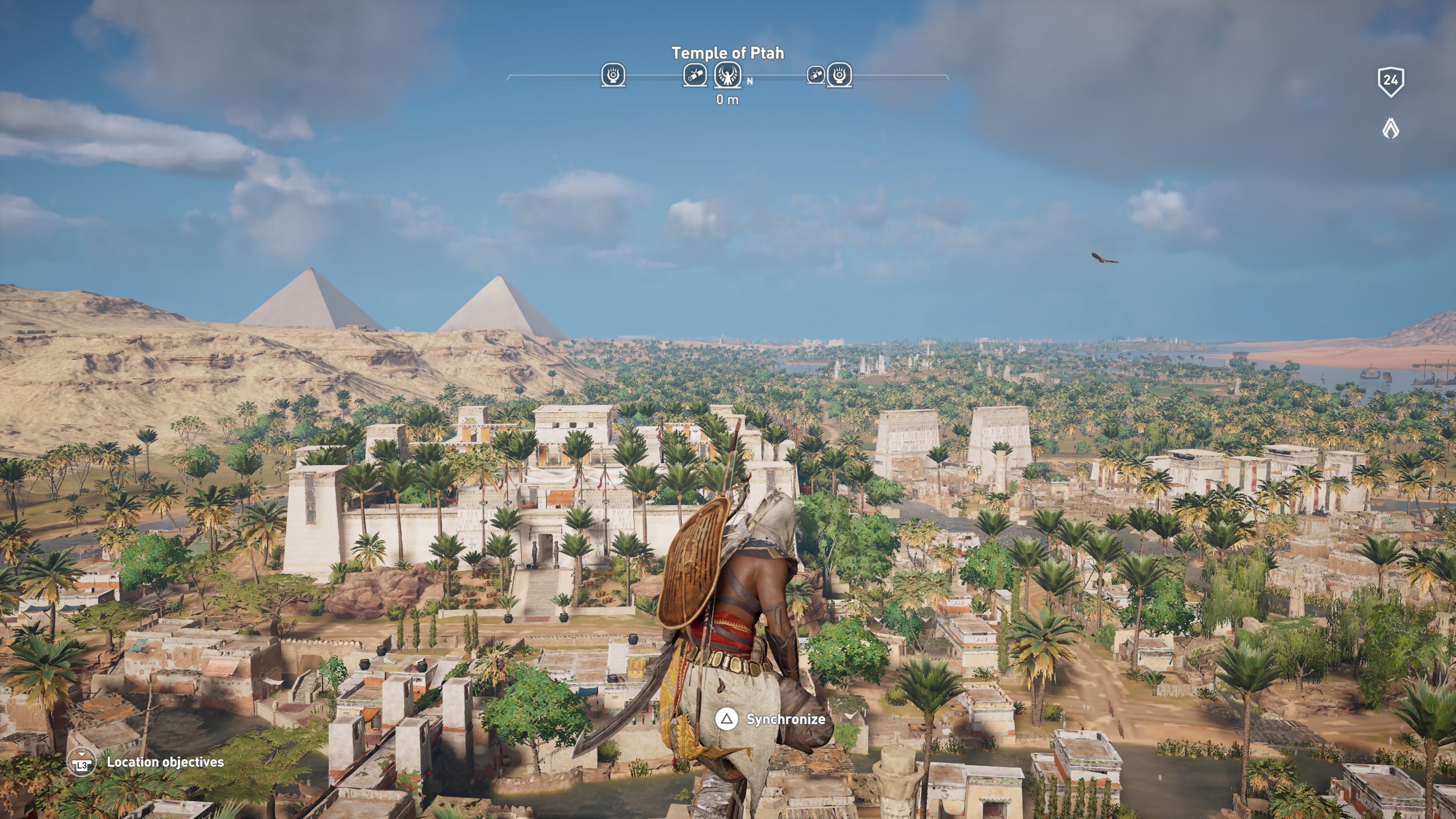 You’re never quite sure what you’ll get when starting a side quest in Origins, and it’s that excitement and curiosity that powers our compulsion to take on every side quest we come across.