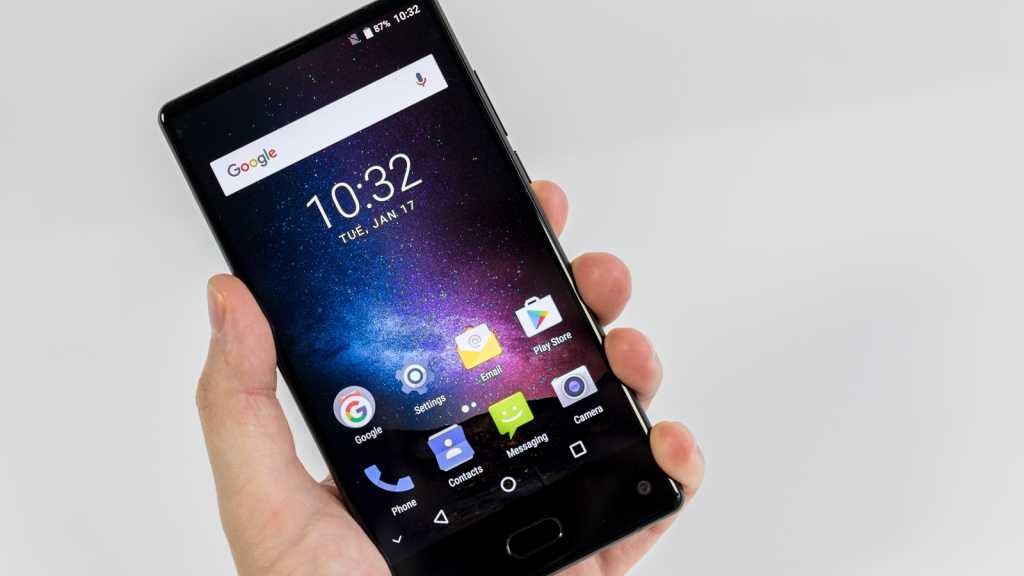 For a budget phone the Maze Alpha ticks several boxes: it has a huge, good quality screen, and sufficient performance for most users. But be prepared for how big and heavy it is, despite the (not strictly) ’bezel-less’ display, and do not buy this phone for its dual-camera. As a significantly cheaper alternative to the Mi Mix, though, it has some merit.

A big-screen phone with a budget price tag and a ‘bezel-less’ design, the Maze Alpha certainly looks to be great-value on paper.

Bear in mind when buying that this phone ships from China, which means you are liable for import duty (calculated at 20 percent of the value on the shipping paperwork plus an admin fee of around £11).

The Maze Alpha is also available at Amazon UK for £199.99, but even with import duty GearBest offers a cheaper deal.

There’s also the newer Alpha X which has an 18:9 screen.

The idea of a ‘bezel-less’ phone is a bit misleading. Even the Mi Mix 2 (for which a review will be coming soon) is not strictly bezel-less. Both it and this Maze Alpha have a chin, and it’s just the top, left and right edges that feature edge-to-edge glass… well, sort of, since a very slim outer frame remains visible.

The chin here is actually rather pronounced, so while the Alpha would appear to be mostly glass the screen-to-body ratio is ‘only’ 83 percent. Part of the reason for its size is the tech that’s packed into this part of the device.

As with the Mi Mix the selfie camera is housed bottom right, which means taking a portrait snap requires turning the phone upside down. Annoying, but you get used to it.

There’s also a physical home button here, which builds in a fast and responsive fingerprint scanner. It’s not a button you can press, as such, but it recognises that a quick tap means you want to go back, and a longer tap means you want to go home. Meanwhile these buttons are replicated on the bottom of the screen along with a recents button, though you can hide these by tapping the downward triangle to the left.

The Maze is a very well built phone, and you would never guess its budget price tag from a single glance. With a metal frame and glass front and back it adopts a premium look. Gorilla Glass should go some way to protect all this glassware, though of course it’s still possible to smash if you don’t take good care of the phone.

One thing you’ll immediately notice is its weight. Even without its top bezel this is a large phone that stands roughly 16cm tall. A capacious 4000mAh battery inside adds to its bulk, and the Maze Alpha tips the scales at a colossal 227g.

It’s meant to be big, though, and the 6in screen – though a tad smaller than the Mi Mix’s 6.4in panel – is primed for playing games, watching video or just generally supersizing whatever you fancy.

The screen uses IPS tech, which is renowned for its realistic colours and decent viewing angles. It’s sufficiently bright, and the full-HD resolution of 1920×1080 pixels results in sharp text and images.

The aspect ratio is a standard 16:9, though, rather than the 17:9 we see in the Mi Mix or 18:9 in more recent phones such as the Galaxy S8. This means the only benefit to the bezel-less design is that it looks cool.

Along the bottom edge runs a single row of drilled out holes either side of the reversible USB-C port. There’s a mono speaker hiding behind, which offers good volume but distorts at maximum settings.

Up top is a 3.5mm headphone jack, and on the left side a dual-SIM tray that can alternatively accept a single Nano-SIM and a microSD card up to 256GB in capacity. A volume rocker and power button lie on the right edge.

Turn over the Alpha and you’ll find the dual-camera at top left protrudes slightly from the case, with a single LED flash to the right. Save for a few greasy fingerprints the Maze looks good from behind, though, with a polished black appearance and a relatively small and inobtrusive company logo toward the bottom. (Also see:  Best Chinese phones.)

In common with the also bezel-less Doogee Mix and more traditionally designed Elephone P8 the Maze Alpha runs a Helio P25 octa-core chip, here clocked at 2.5GHz. This is integrated with the Mali-T880 GPU, and paired with 4GB of RAM and a very generous 64GB of internal storage. (A 6GB RAM, 128GB storage model is also available.)

The end result is a phone that offers decent, but not top-end, performance. For most users it will be perfectly adequate, able to multitask and handle everything they might want to achieve on the phone. In our benchmarks it proved itself to be capable of some casual gaming, and turned in middling overall performance scores.

Compared to the Doogee and Elephone it performed better in our graphics tests, but didn’t score quite as highly in core processing power. We’ve compared the results of all three phones in the chart below.

Battery life isn’t bad from the Maze, and though most people will want to charge it every night light users might squeeze out a day and a half of usage from its 4000mAh battery. This sounds – and is – a very healthy capacity, but the screen traditionally places one of the largest drains on battery life, and here we have a 6in monster.

Though it does not support wireless charging (a feature typically reserved for top-end smartphones and not especially common in China), the battery can fast-charge at 9V/2A.

NFC is missing here, though you do get HotKnot. It works very much like NFC in phones that run on MediaTek processors, but does not support mobile payments.

In other respects most connectivity bases are covered, with the Maze Alpha offering Bluetooth 4.1, 802.11ac Wi-Fi, GPS and GLONASS.

While performance is middling and the screen is a hit, if there is one let-down for the Maze Alpha it’s the primary camera. Or should we say cameras, since you get two F/2.2 lenses, one rated at 13Mp and the other 5Mp.

Our problem is not with the level of detail they are able to capture, which is actually pretty good although some graininess is visible when viewed at full-size, but rather the fact white balance seems to be way off. There is a very strong blue tint to all our shots, which became even more obvious when compared to the output of its rivals. The colours are bright, but not at all realistic.

With HDR turned on the cameras do a much better job of picking out the shadows, but a lot of the colour is evened out in such a way that the end result seems a little washed out.

Our low-light test, which does not take into account the single-LED flash, was an abomination. It did a terrible job of lighting the scene, such that you might not realise Batman was even there had we not told you.

The camera app offers Video (1080p), Photo, FaceBeauty, Blur, Mono, Panorama and Pro shooting modes, and in the auto Photo mode you can apply real-time filters. The Blur preset simply blurs the outer edges of the image, with the effect adjusted on a slider. It’s not great.

There’s a 5Mp front camera, too, which also supports Mono and FaceBeauty modes. Oddly if you tap the More options icon at the top of the screen you just get a box that says No mode. (When using the primary camera this is how you access HDR.)

The Alpha runs a mostly stock implementation of Android 7.0 Nougat, but you’ll notice there’s no app tray so all shortcuts are laid out on the home screen (you can organise them into folders if things start getting cluttered).

It comes with the full selection of Google services out of the box, and you can download whatever you like from Google Play.

There is a one-handed mode, which should make it easier to deal with the 6in screen, and several lock screen gestures are supported, including double-tap to wake and slide down for quick-access to the camera.

You can take three-finger screenshots, adjust the volume with a two-finger gesture or turn over the phone to mute a call, plus a few others. All are turned off by default.